The Raya Lucaria Crystal Tunnel is one of several cave-based dungeons that can be found throughout The Lands Between in Elden Ring. This dungeon is a perilous, crystal-covered cave that can yield some useful items and a fair amount of Runes during your exploration of the Liurnia region.

Named after the Raya Lucaria Academy that the caves sit adjacent to, this tunnel-structure dungeon features a number of Crystal Sorcerers ready to throw dangerous magic projectiles at those who enter, in addition to the Crystalian boss that will net you a healthy amount of Runes and the useful Smithing-Stone Miner’s Bell Bearing [1] item after being defeated. 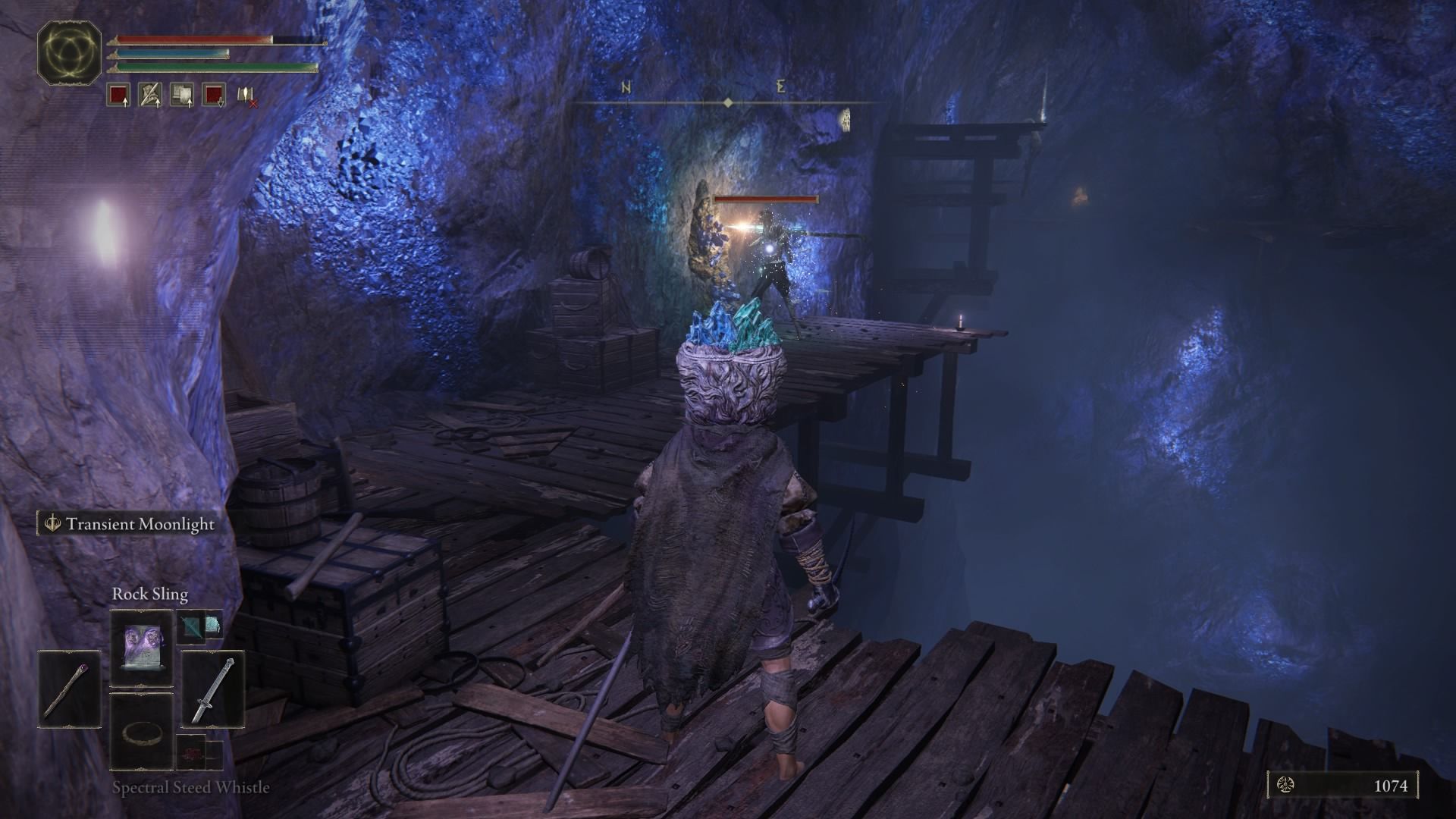 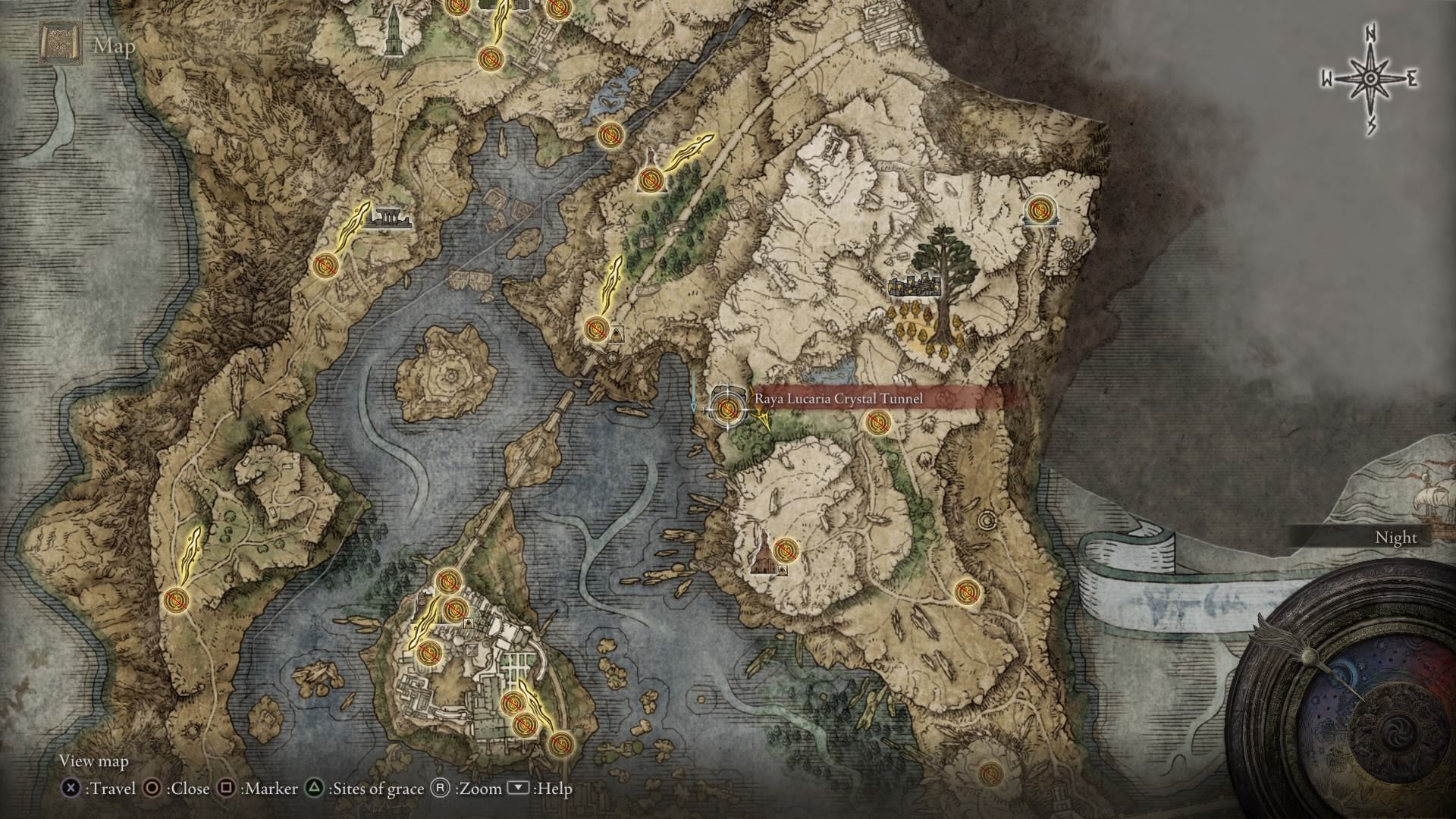 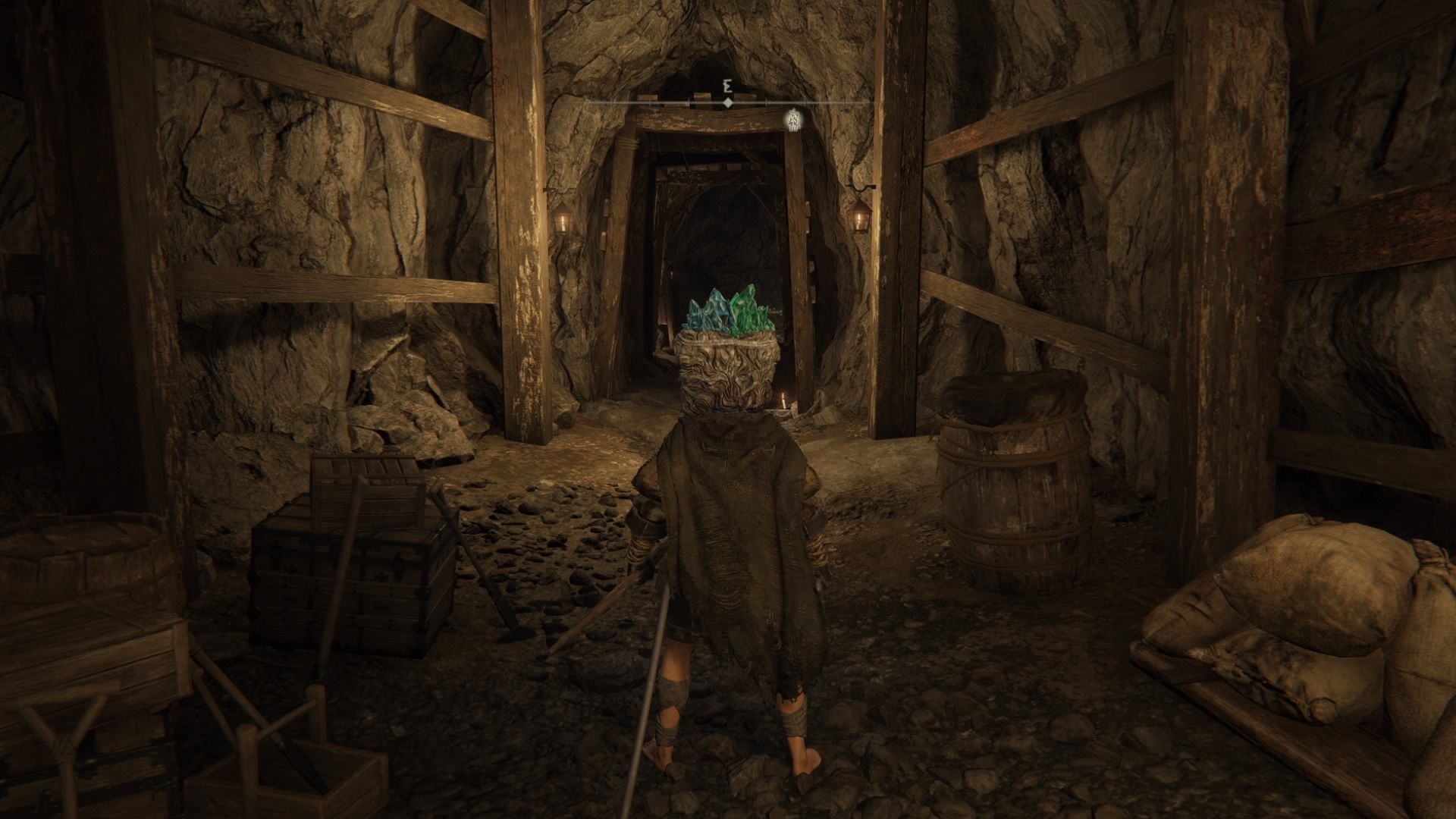 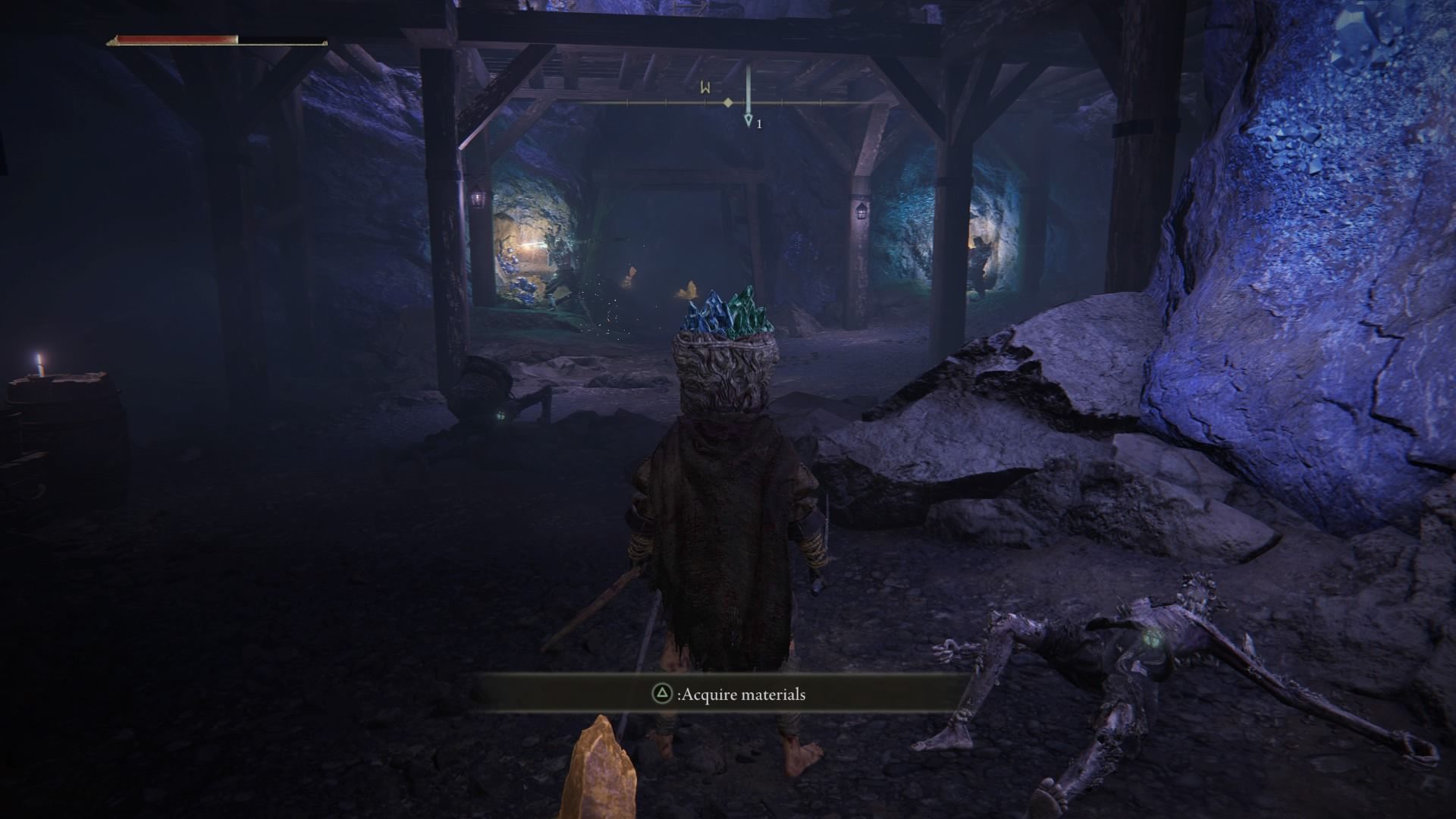 This particular Crystal Tunnel is a fairly easy dungeon that offers some useful rewards. It’s a slight step up in difficulty compared to some of the catacomb dungeons that you’ll likely have completed first in the Limgrave region, but as long as you’re appropriately leveled and gear for Liurna, it shouldn’t be too troublesome.

Many of the enemies in this dungeon are reasonably weak to magic-based attacks despite using magic themselves, so it’s recommended to gear up with at least some basic ranged Sorceries such as Glintstone Pebble if you can.

This dungeon is ideal for players who need to obtain Smithing Stones or Somber Smithing Stones to upgrade their weapons. Not only can these items be found frequently throughout the dungeon, but the Smithing-Stone Miner’s Bell Bearing [1] the boss drops can be given to the Twin Maiden Husks in Roundtable Hold to purchase Smithing Stones from them using Runes, as opposed to farming them. 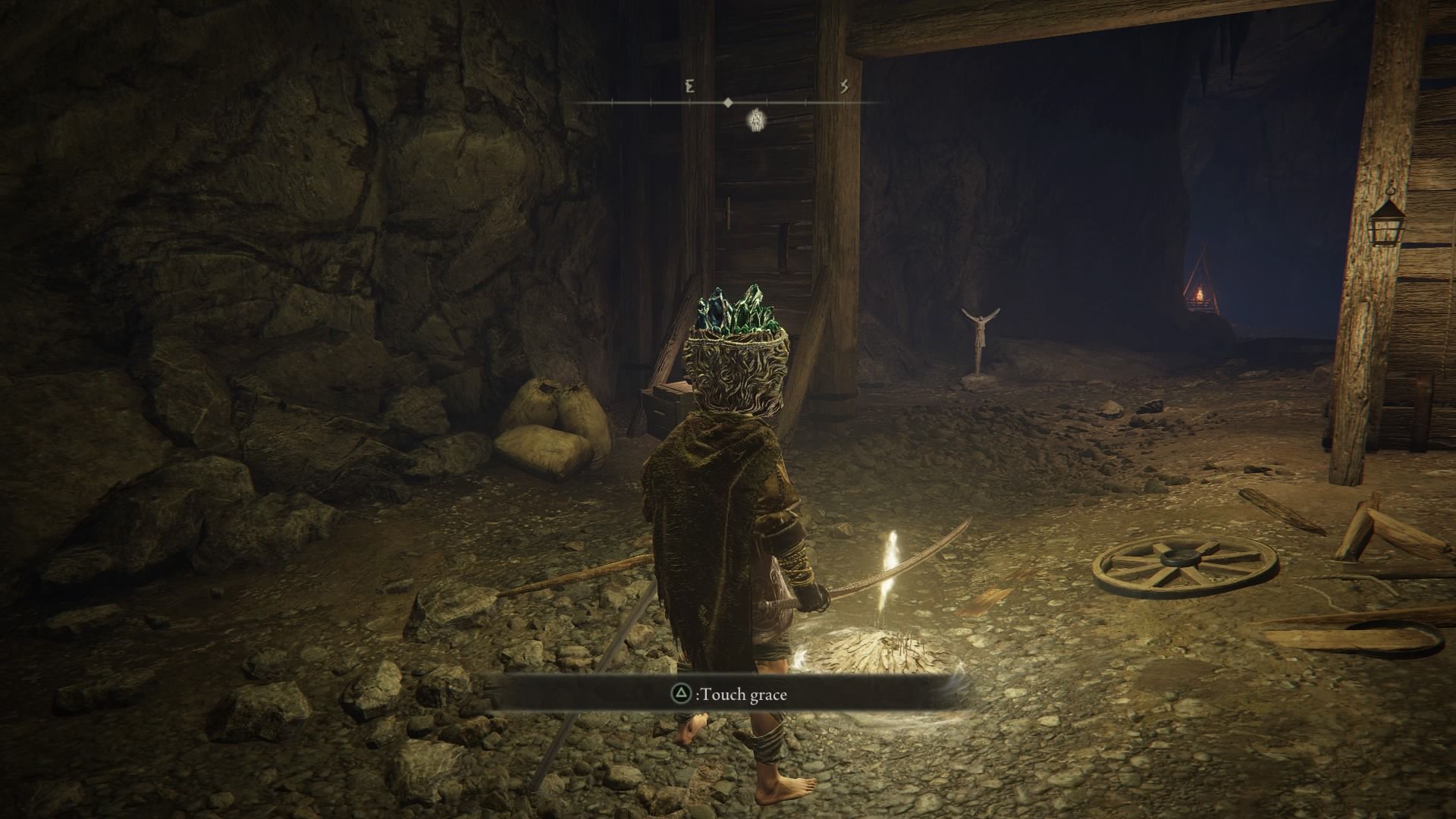 This Crystal Tunnel can be found northeast of the Academy in the Liurna region. After passing through the entrance and descending via the elevator, move north to touch the Site of Grace. 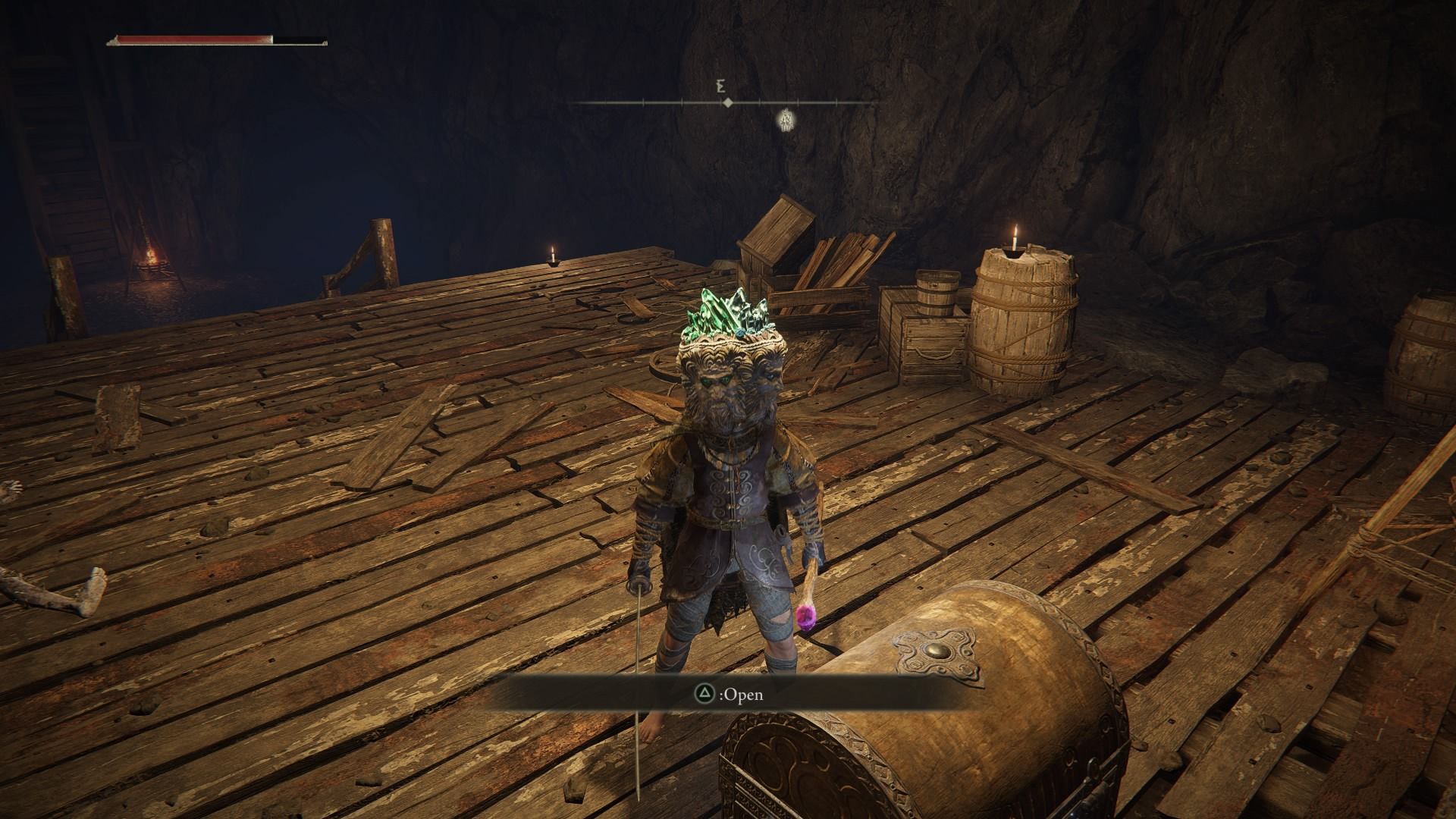 Heading north, you will immediately find a few crystal enemies to the right, up some wooden stairs. They are guarding a treasure chest that contains a Somber Smithing Stone [2]. These can easily be taken out with ranged magic or some heavy attacks. 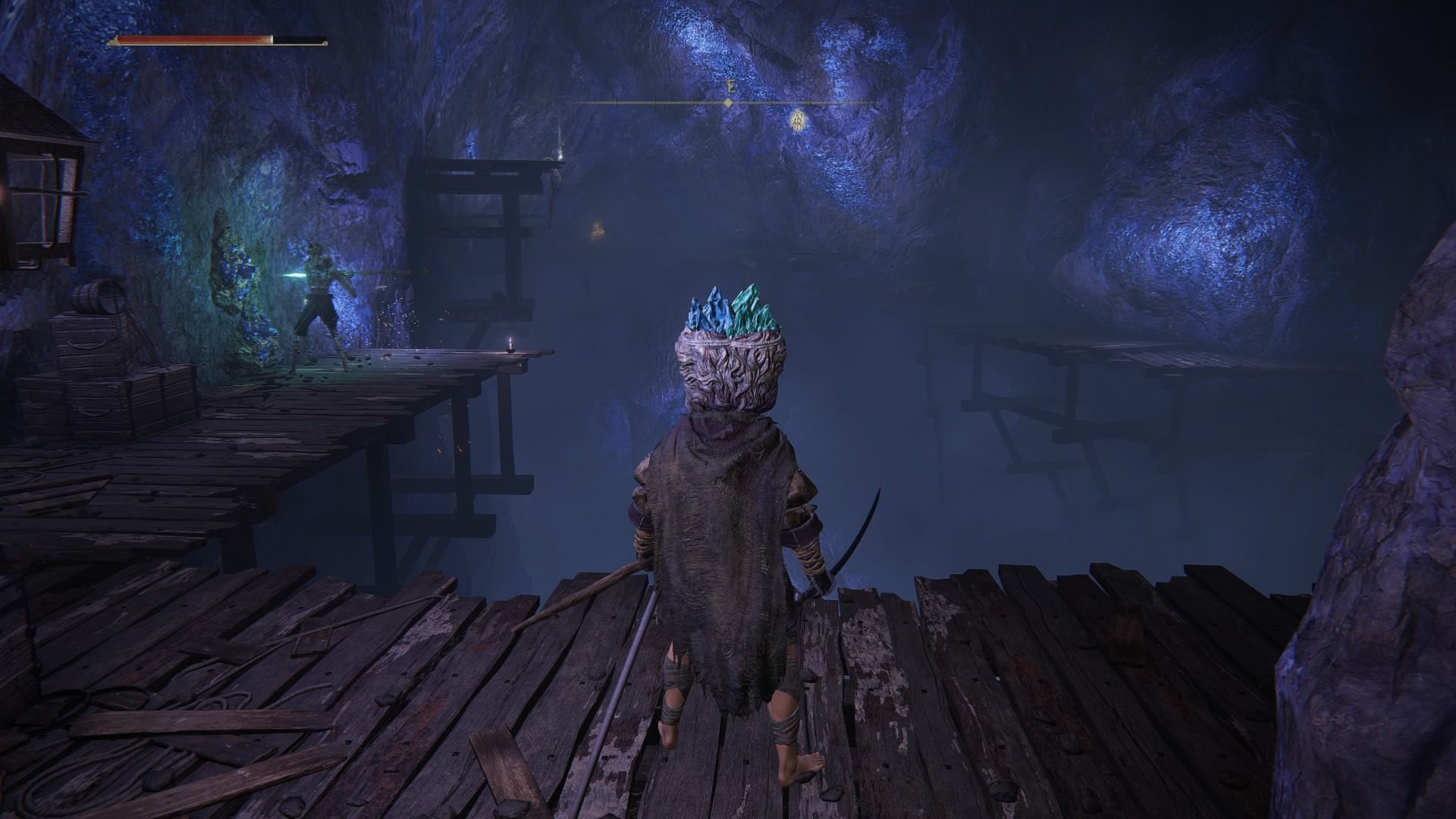 From the treasure chest, head back down the steps. Follow the lanterns and glowing blue crystals down a sloped hallway, leading to this open cavern with a blue hue. The enemies in this room will all be preoccupied with digging at the walls, so you can quickly catch them unaware.

As you head east through this cavern, you’ll reach a point with a lever for summoning an elevator and a right turn into another section. Remember the elevator location, then head right. 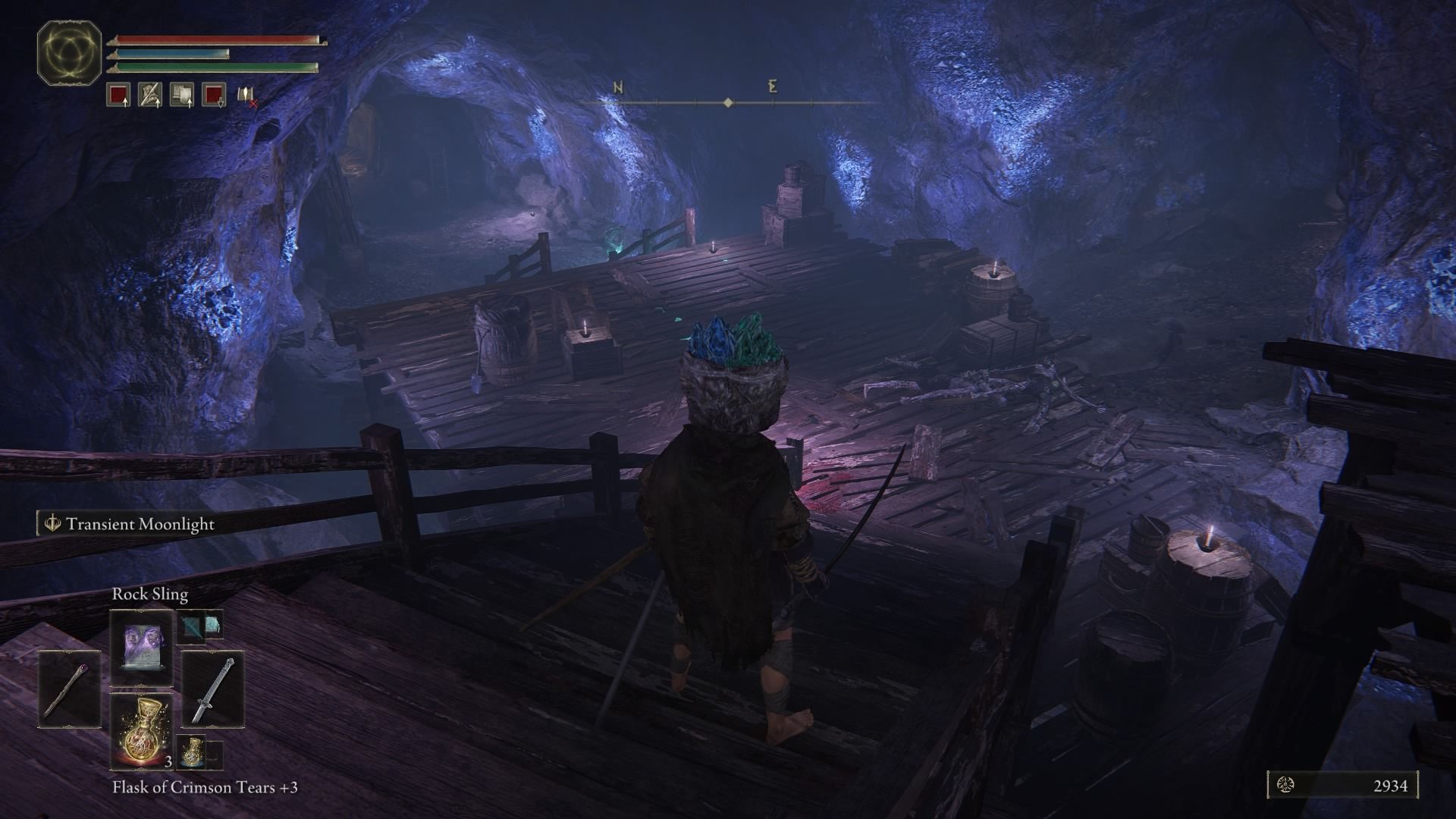 You’ll arrive in a wide open cavern with wooden platforms and steps. This room has a few digging enemies, and a few sorcerers who will spam ranged magic spells. Take them out with ranged attacks if possible. 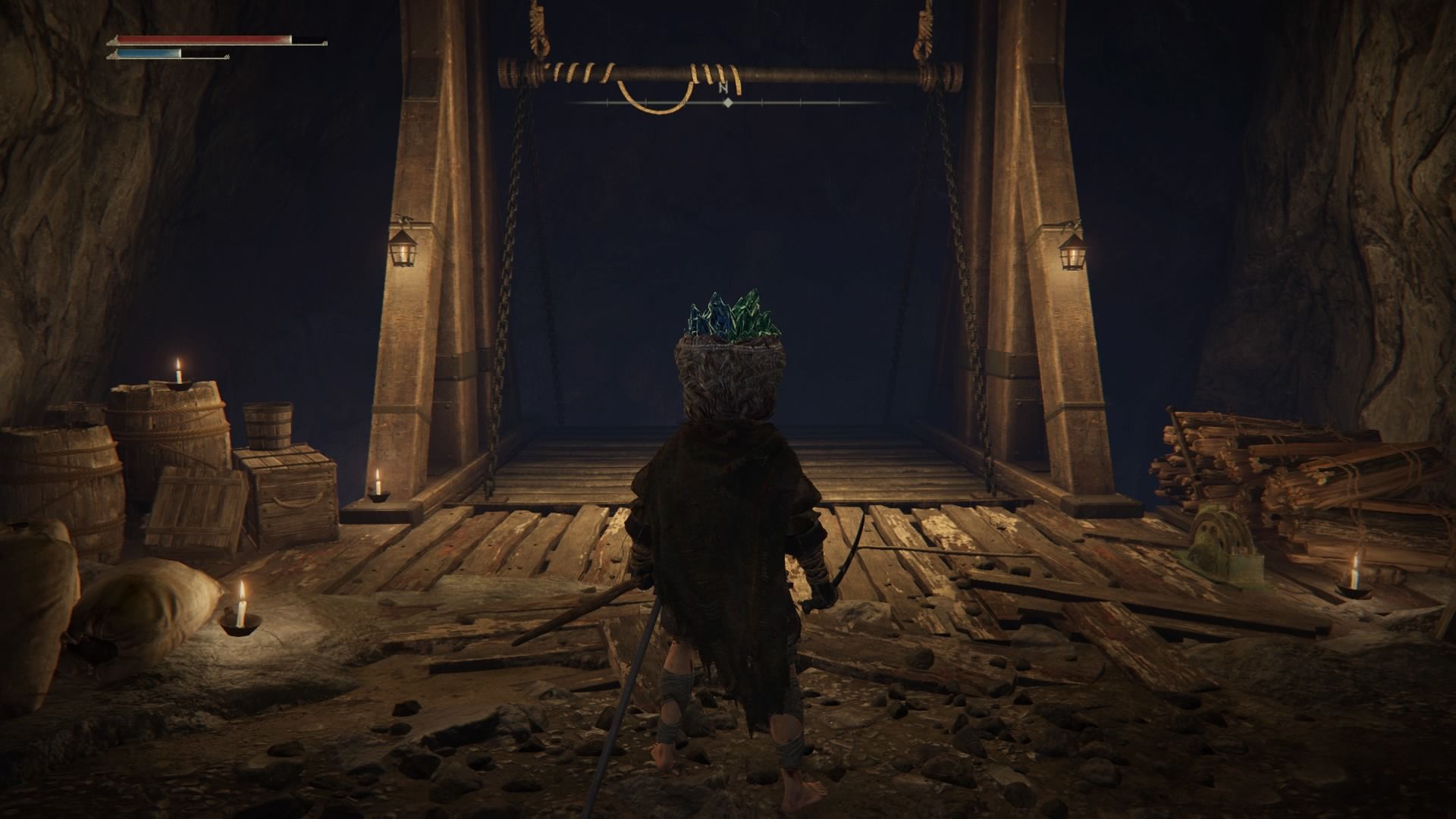 At the end of this particular purple cavern, you'll find another elevator that will allow you to descend further. You’ll arrive in another generic brown-hue cavern corridor. Move through it, following the candles, until you arrive in yet another wide-open blue cave room, one with a small beam connecting wooden platforms on either side.

Be careful and make sure to take out the sorcerers before attempting to cross the beam (or just run across quickly), or they’ll knock you off with spells. 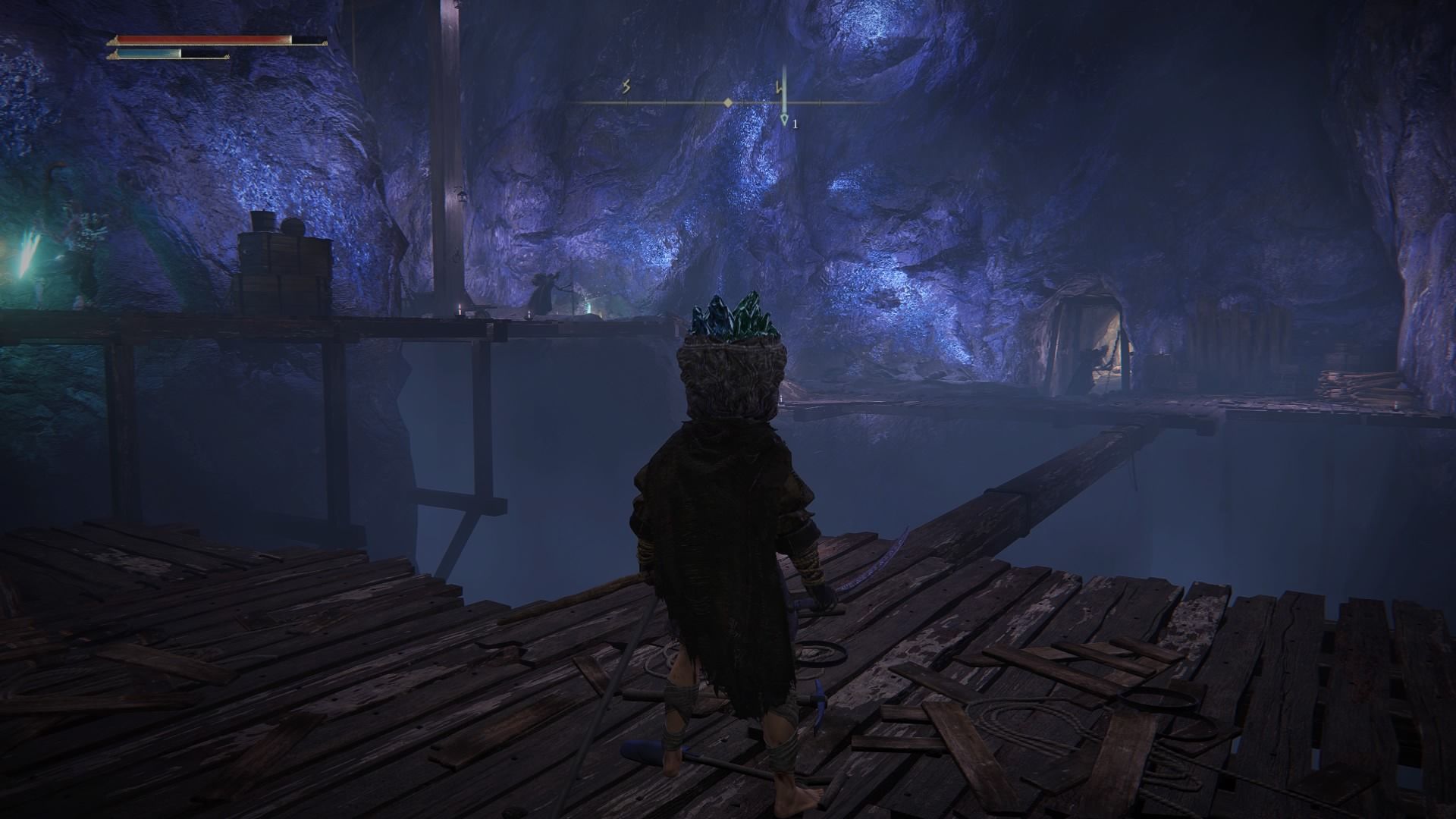 The corner of this room has the elevator platform for the elevator shaft we saw earlier. You can now stand on the button here to activate this handy shortcut, and travel between the two levels of the cave. Continue on to the cave corridor on the opposite side of the beam from where you entered this area. 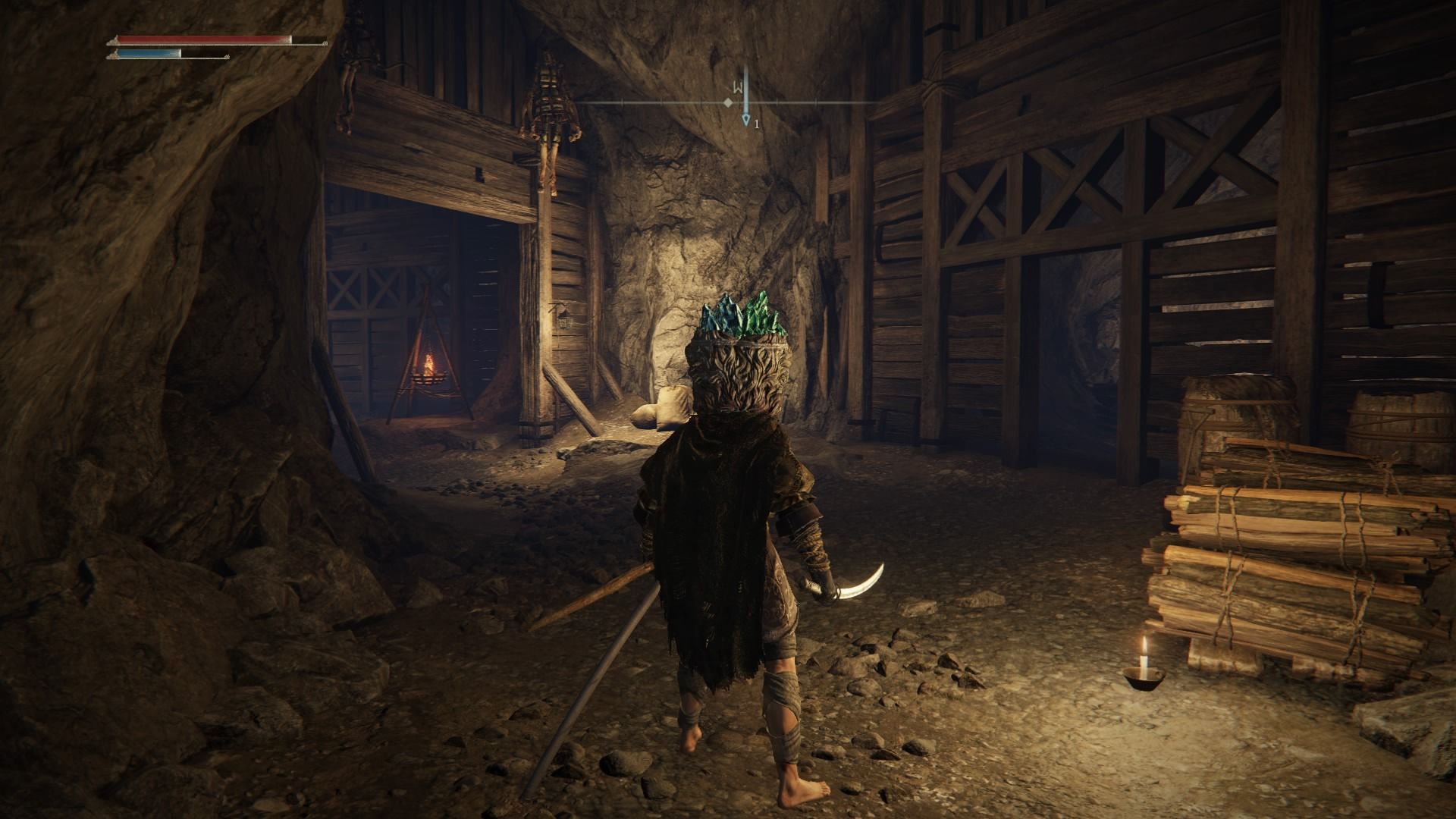 As you walk through the next corridor, some Marrionette soldiers will immediately jump down from the ceiling and run out. Make sure you’re ready to fend them off. 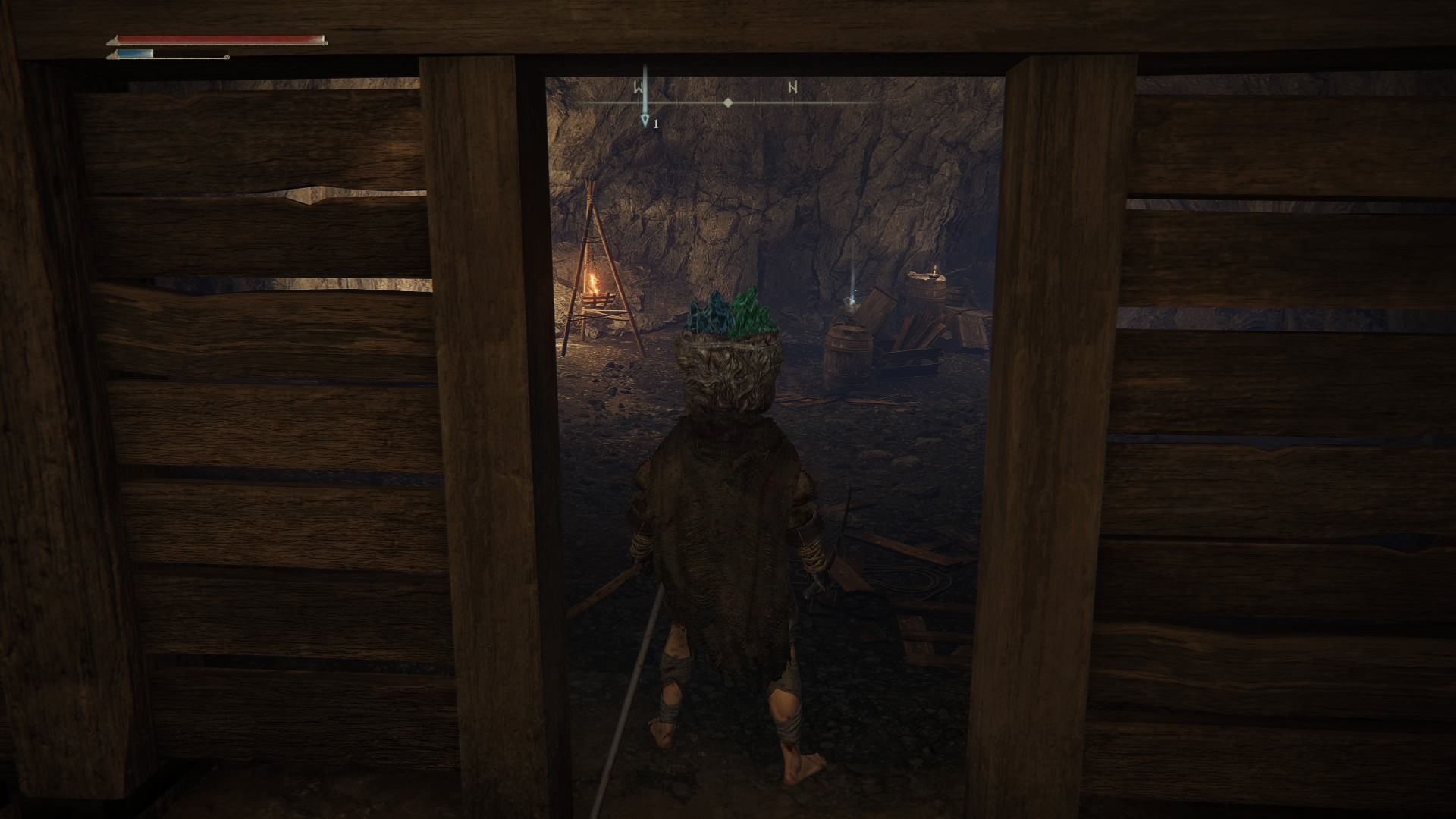 You can head right into this small area to find a Smithing Stone both on the body and in the glowing yellow crystal. 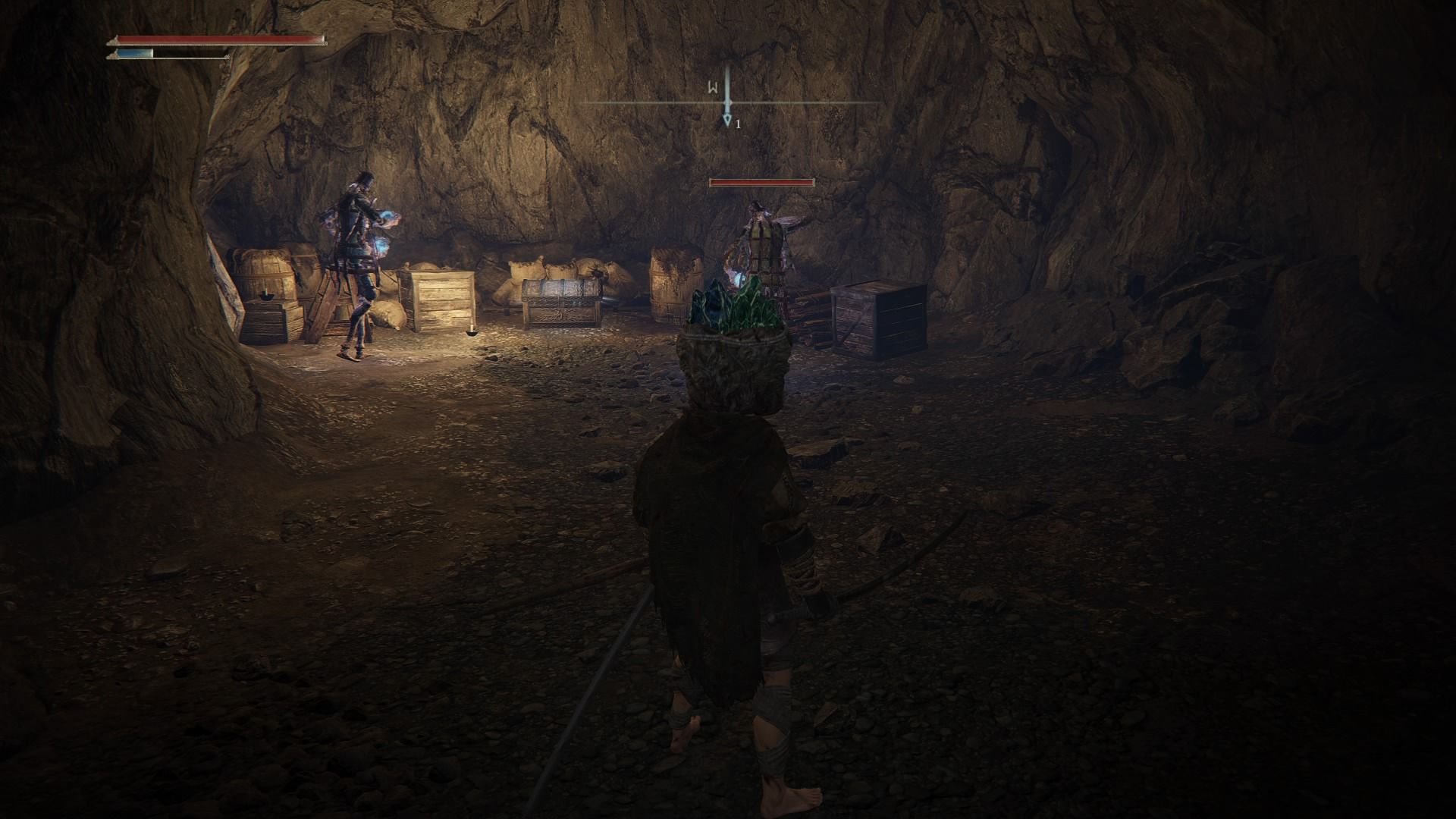 Continue onwards through these wooden doorways to progress. Turn right to find these two Marionette soldiers in front of a chest. Be careful, there’s also one hiding in the shadows behind the wooden doorway. The chest contains the Crystal Knife. 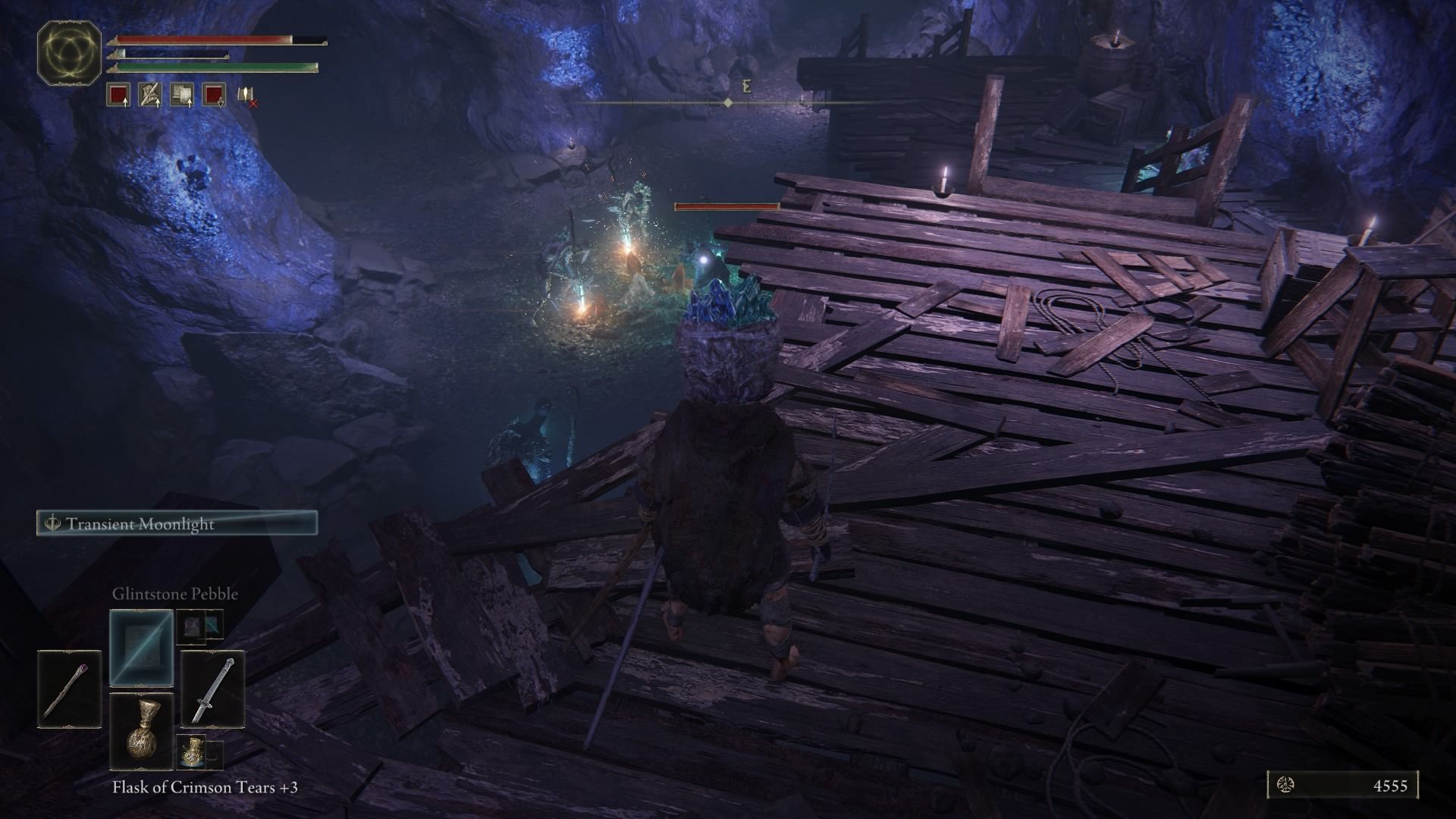 Head back to the main hallway and keep heading north until you reach another wide-open area. This area will have one sorcerer and three other miners digging away at crystals in the center of the room. After defeating all the enemies, there’s lots more Smithing Stones to pick up in this room. You can also get some free hits on the miners digging at crystals underneath the wooden platform and steps. 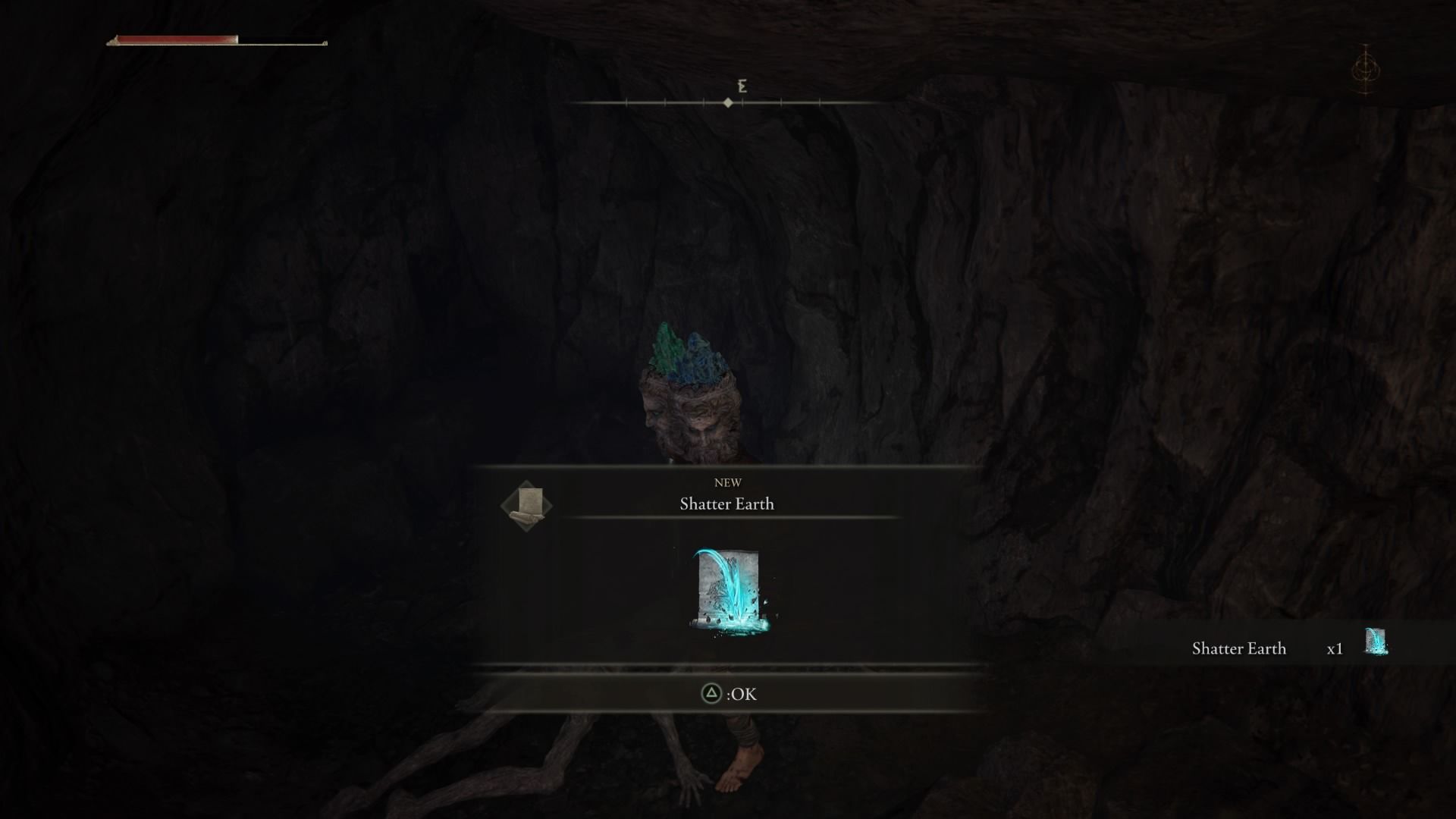 After defeating the sorcerer and three miners, you can turn left into a dark cave to find the spell Shatter Earth. This cave is a dead-end though, so head back out and head north from the three-miner room to progress. 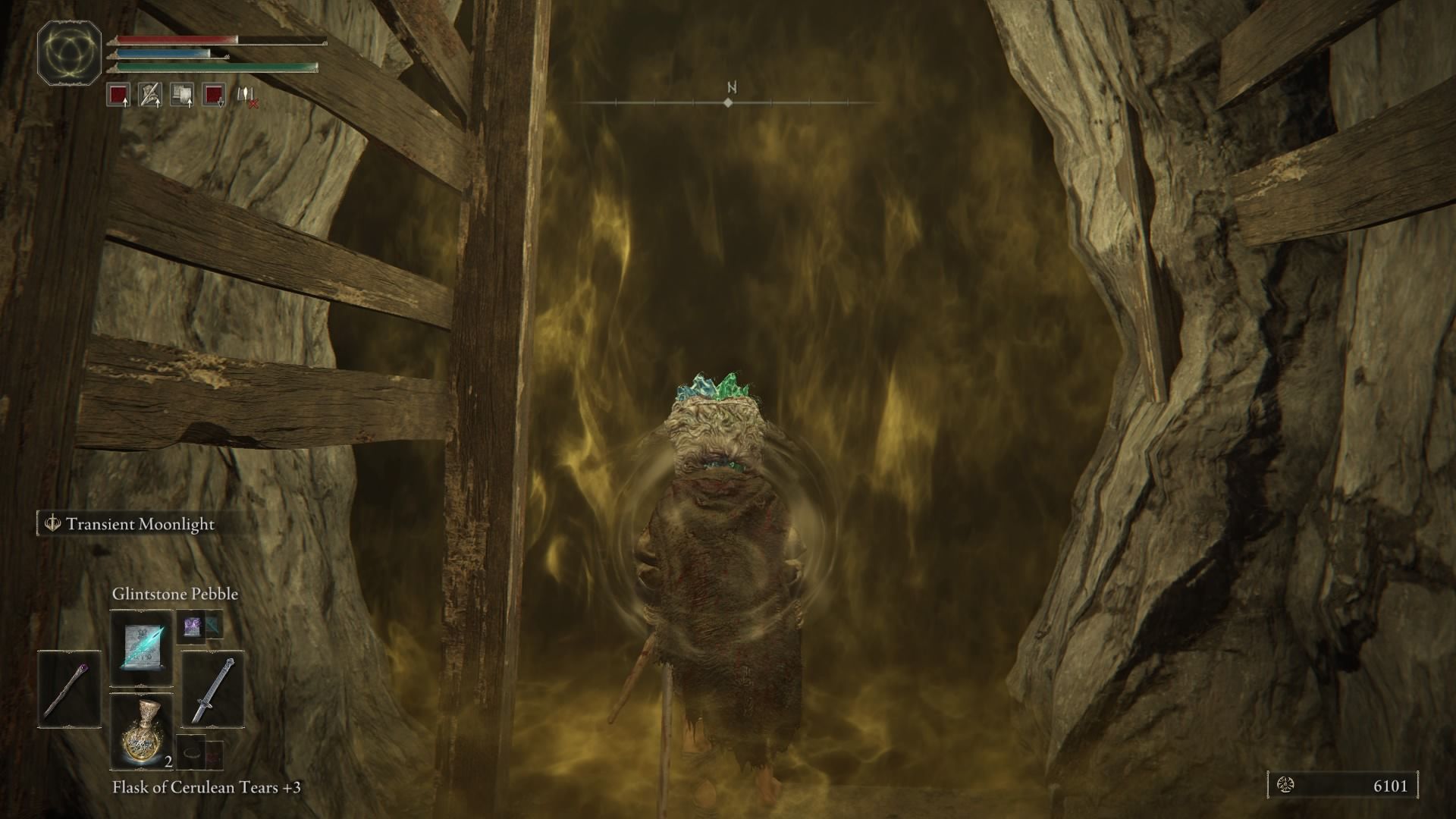 After walking north some more you’ll reach another elevator, taking you even further down. At the bottom of this elevator, you’ll arrive at the yellow boss mist. 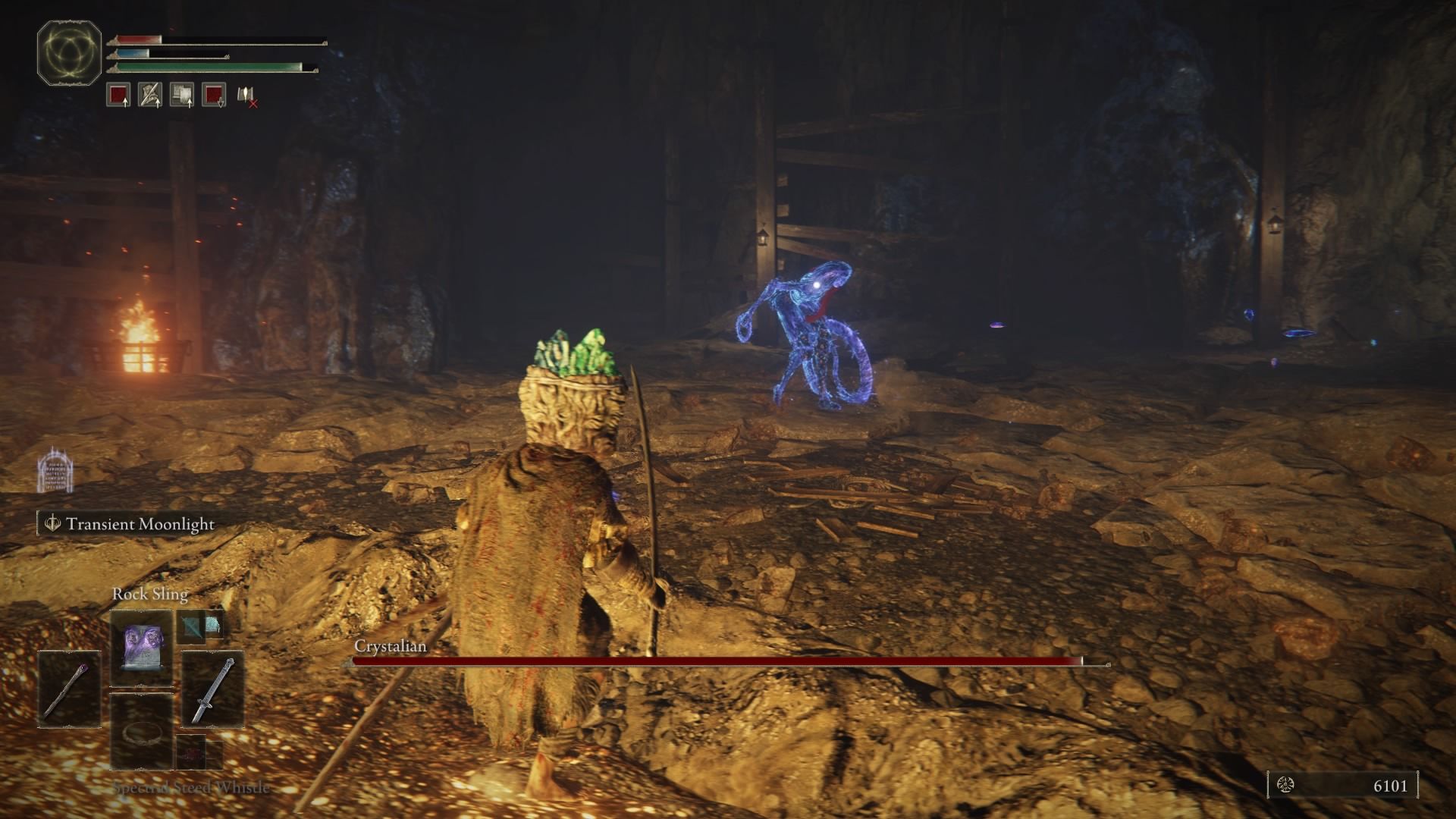 Crystalians are resistant to many types of attacks at the start of the encounter. Thankfully, this particular Crystalian is also fairly slow, and has quite readable attack patterns.

The best approach to this fight is to attempt to break their guard as often as possible with heavy attacks, whilst dodge rolling in circular movements around them when they attack with their weird disc weapon. You can also parry their disc weapon when they swing it sideways, which will similarly leave them vulnerable. Doing so will increase the amount of damage they take over the duration of the fight.

The Demi-Human Spirit Ashes is also particularly useful for this battle, as the single Crystalian will become overwhelmed by the group of enemies, allowing you to get some quick poise breaks in. This will speed up the fight massively, and make defeating them much easier. 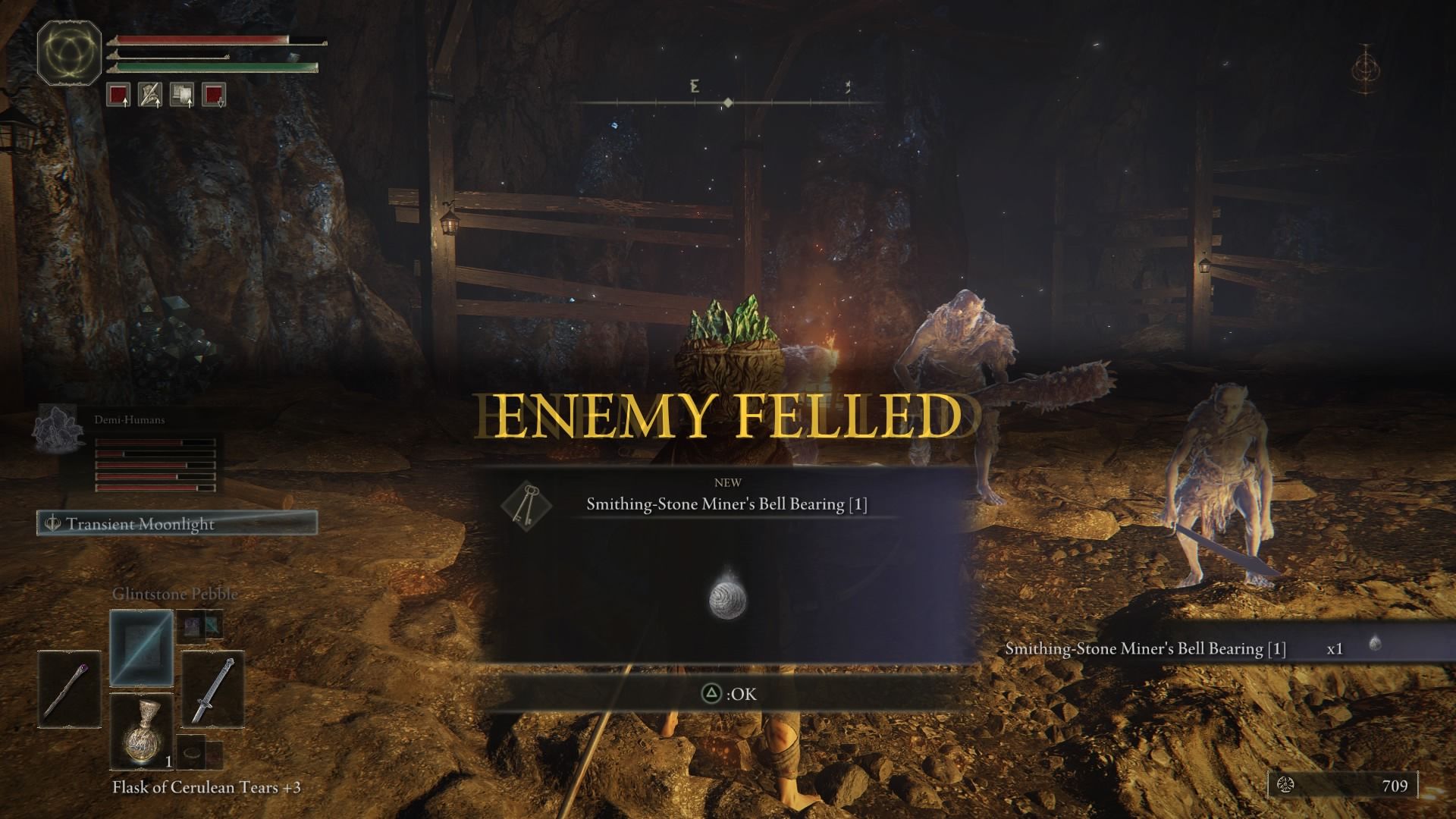 Once they’re down, they’ll drop the Smithing-Stone Miner’s Bell Bearing [1] and a chunk of Runes, and create a teleport point for you to leave the dungeon.