EQQO is a puzzle game where the player has to direct a blindfolded boy around the game world, while also keeping a giant egg safe. The game has some tricky puzzles, which is why TheGamer has created this helpful guide to see you through to the ending.

The puzzles in EQQO generally involve repeated elements, so we will describe them using the following phrases: Egg Door (the door you need to bring the egg too in order to reach the next map), Head Statue (a statue with a mouth that Eqqo needs to put his hand in), Fresco (an obscured part of the scenery that the player needs to clean), and Contraption (a device that Eqqo needs to put the egg in so that it can be used to reflect light). 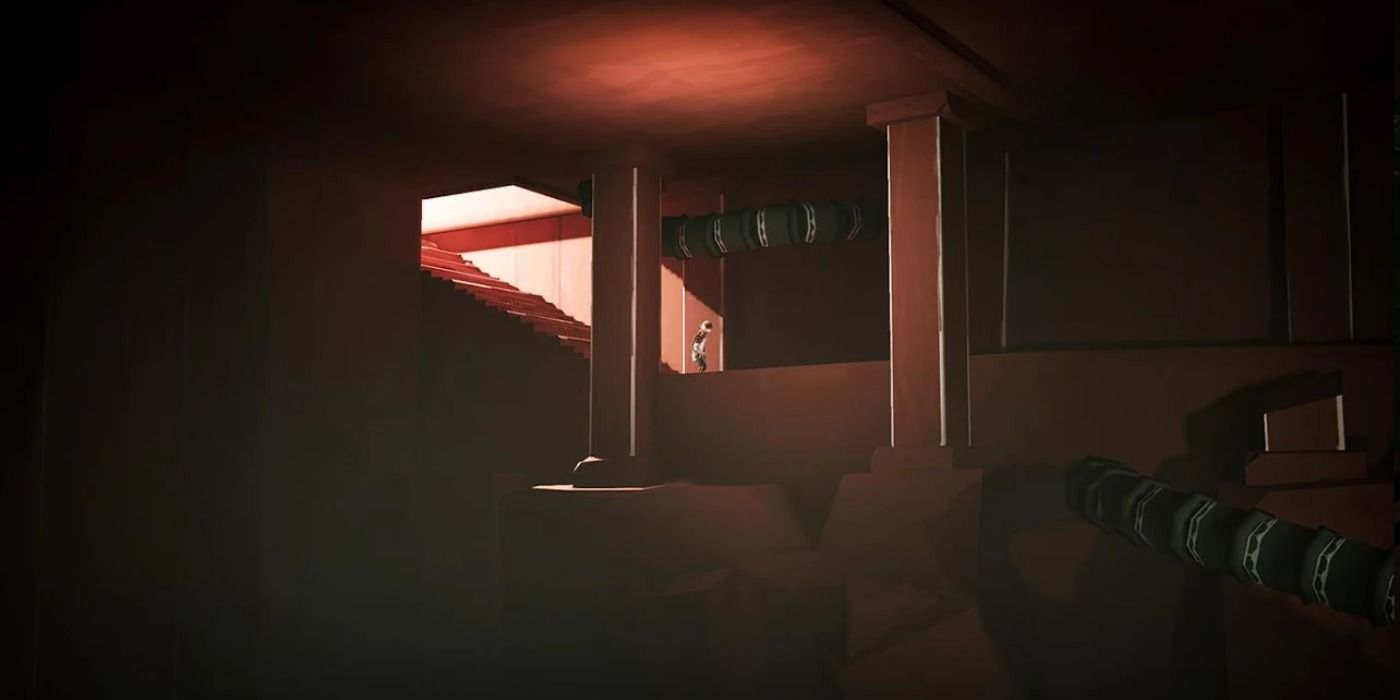 Reveal the fresco on the wall and unlock all four views. Move a barrel onto the pressure plate, which will lift the fresco and give access to a spin wheel connected to the rope lift. There are doors around the tower that connect to each other. To open these doors, the player needs to grab rocks from the nest and throw them at the circular signs with birds on them. Make sure Eqqo isn’t standing in the doorway. Just keep opening the doors and going through them to reach the final egg door at the top.

Unlock all five views around the room. Have Eqqo follow the path to where the lift is and smash all the barrels, revealing rocks. Use rocks to hit the bird sign, revealing a spin wheel. The wheel is connected to the lift. Use the lift to reach a pressure plate and step on it, lowering the bridge. Drag the column with the rope across the bridge and put it on the plate to keep the bridge down, allowing Eqqo to cross. Use the bird switches to go through the doors. Once you reach the grate, send Eqqo through the bars and have him put his hand in the head statue. This will raise the grate, allowing Eqqo to grab the egg and go through the egg door.

Put a barrel on the pressure plate, revealing a statue head. Send Eqqo through the grate and toward the statue head, while throwing rocks at the shadows to keep them away from the egg. The head statue will lift the grate, so Eqqo can run back and grab the egg. Head towards the egg door.

Next room is simple. Put the egg in the tube, firing it to the end of the room in an area filled with shadows. Eqqo can now reach the egg by climbing the ledge, so throw rocks at the shadows to keep it safe till he gets there. Go through the egg door.

Put the egg in the tube to send it to the central area. Topple the column to create a bridge. Put the egg in the green tube. Throw a rock at the bird switch below to open a grate, allowing Eqqo to reach the egg. Grab the egg (hit the lever on the far side of the room if Eqqo falls into the trap) and step on the pressure plate to lower the bridge. Drag the barrel across the bridge and put it on the plate, allowing Eqqo to cross. Hit the bird switch with a rock revealing a spin wheel. Use the wheel to lower the lift and send Eqqo to the top floor. Go through the egg door.

In the next room, spinning the dial will change which tube the egg will go out from. Switch the dial to light blue and put the egg through to open the door.

The Bell Ringer will try to eat the egg so the player has to be quick. Run over to the head statue and put Eqqo’s hand in it, lowering a chain. Pull the chain to drop the grate beneath the Bell Ringer. Grab the egg and step on the pressure plate, revealing another color dial. Switch it to white and put the egg in the mechanism, pushing the stairs and revealing a new exit. Go down the stairs.

Pull the yellow block to create a bridge and have Eqqo run to the center of the room to grab the egg. Push the barrels blocking the next bridge. The Bell Ringer’s arm will come down and try to grab the egg. Grab a rock and throw it at the arm to make it go away. Grab the egg and go through the egg door.

In the next room, move the yellow column blocking the bridge. Try to run across and Eqqo will fall into the abyss below. 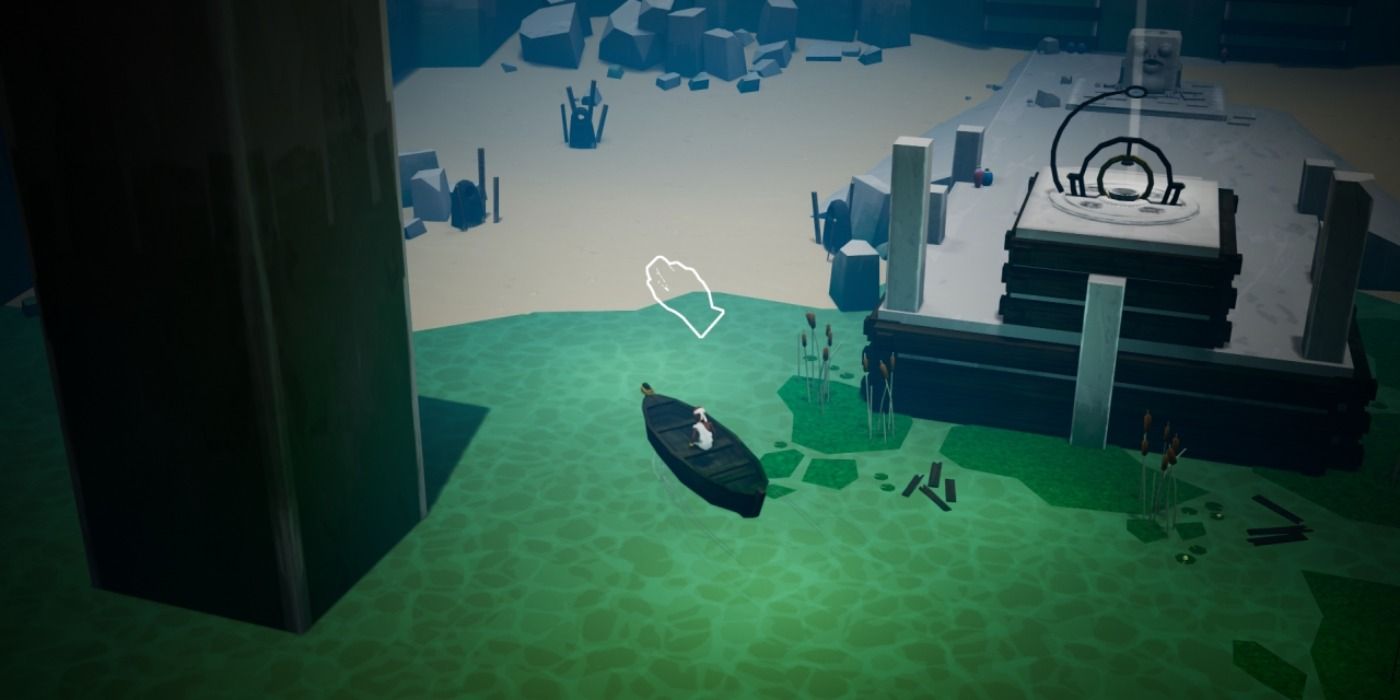 Eqqo is unconscious. Move the columns off his body and put one on the plate, revealing a wheel. Turn the wheel to open the faucet. Throw a rock at the bird switch to drip liquid on Eqqo and wake him up. Go through the grate.

Put your hand in the head statue to reveal a dial. Use the dial to allow the egg to pass through the grate, dropping the bridge. Drag the column across the bridge and put it on the plate, opening the sewer grate. Go through the grate.

Reveal the frescos and throw a rock at the bird switch, revealing a dial. Spin the dial to let the egg into the room and it will flip a switch. Move the barrels blocking the egg and spin the dial again. This will let the egg through and it will open a sewer grate.

In the next room, each off the head statues is connected to a chain that opens a bridge. Open the bridge furthest from the egg/grate and open them all in reverse order, leaving the closest one for last. Move the barrels blocking the path of the egg. It will go down the river and flip the switch, opening the grate. Pull the lever to open the bridge, opening a path to the sewer grate.

Rub off the fresco to reveal a target. Throw a rock at the target to reveal a dial. Spin the dial to open the grate and the egg will flip a switch, creating a bridge. Put Eqqo on the boat, which can be pulled from the yellow rope. Follow the egg in the boat.

Remember When Xbox One Almost Lost The Console Race?