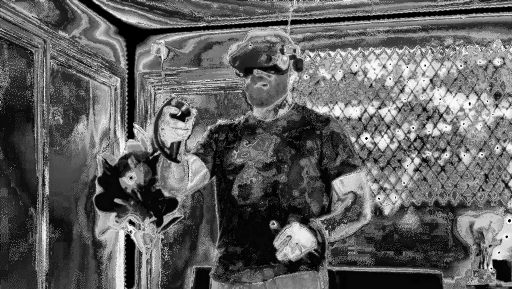 One of VR’s biggest YouTubers is turning his channel into a charity-driven project.

In late April, Eric ‘For President’ Morrill posted a new video. This one was just a little different compared to his usual streams, news broadcasts and videos in which he tracks down professionals and lets them try virtual representations of their job or hobby. In it, Morrill announced he was turning his channel into a charity-focused effort; revenue generated from future content will be going to organizations related to VR and AR.

Those that follow Morrill may have sensed change in the air. Last year, for example, he and his wife had a son. In the video above, he explains that he’s also now in a better place work-wise, moving from a job he despised to running his own shop. “Life changes quite a bit,” he explains in the clip. “And because of that you have a lot less time to do what you want like making a quantity of videos. But you find different priorities, you find different things that make you happy.”

There’s a little more to the story. Morrill is outspoken both on his channel and on Twitter on his frustration at VR’s adherence to news-chasing trends, especially on YouTube. It’s something he’d hoped to avoid after watching YouTube gaming culture go in much the same way years earlier. “I watched YouTube gaming grow, and while it was a wonderful learning process, I found the YouTube tropes of chasing trends and the repetitive information loop very tiring,” Morrill tells me over email.

“When I was first introduced to Virtual Reality however, I was overtaken by rushing thoughts of everything it could and can be, and as more and more content for VR started popping up on YouTube, it was amazing to see that creativity shine bright. Unfortunately, the videos I love the most where VR creators are creating entire comedy shows in VRChat, recreating their favorite movie scenes in NEOS, creating an interactable museum of other-worldly delights and so much more just don’t seem to get the traction they deserve.”

In Morrill’s eyes, VR YouTube is headed in much the same direction as gaming, though he’s quick to point that “that is no fault of anyone, it is the feedback loop of YouTube directing people in that manner. I don’t blame creators because it is lucrative, they spend a massive amount of time and effort, and they want to and should be rewarded for that, but going against the grain rarely rewards immediately.

“I was always raised that if you are not happy about something, do what is in your power to make a change and due to this I want to take the path away from the ‘algorithm’ and give a voice to those not getting exposure and try to raise awareness for everything XR trying to change the world.”

You will still see some familiar content on Morrill’s channel, like a list of VR projects and people you should support posted just yesterday. But this content will promote and generally be in service to the twice-monthly headline content he plans to produce, starting with a live debate between YUR Fit creator Cix and Pro Putt developer Ryan Engle about Facebook’s effects on the VR market. That’s kicking off on May 6th at 3:30 PM PT.

For this first event, Morrill is raising money for XRSI, a group dedicated to exploring standards for both safety and security within VR and AR. “XR brings a lot of possibilities, and a lot of valid concerns, and understanding how to say safe whether in VR or developing for it is very important,” Morrill says. Videos carry links to donation pages in their descriptions; Morrill is asking viewers not to donate through the YouTube Superchat function.

Each fortnightly event will focus on a different charity. Morrill is looking for causes that improve education, work on social inclusivity for underrepresented groups and explore training and job opportunities in VR and AR among others.

Big changes ahead, then. Morrill hopes to raise over $50,000 split across these separate donations. While he may still produce other content that he’s passionate about from time-to-time going forward, there are things he’s going to miss about the way things used to run.

“I will miss for sure staying on the pulse of VR news, to be able to share the hype and excitement, that thrill of ‘hot of the press’ fervor of a new VR story. There is a certain dopamine rush that comes with the community engagement of that. Regardless of what I will miss, I leave things open ended. The charity mission of leaving that impact on the VR community is what I care about, but if something comes up that I feel needs to be said or talked about, I still have my channel to do just that!”