Regardless of how well you've been doing thus far in Escape Academy, Quanty, the school's trusty AI, has determined that you're a cheater. Don't let the fact that you're reading a walkthrough for the following level mar this occasion with too much irony.

Regardless, you're thrust into a test designed by Quanty himself. Fail, and you'll face expulsion. Pass, and you'll be allowed to stay on at the academy. There are a fair few steps to solving this level's devious puzzles, so we'll help you out – you should be able to get through this level easily within the 25-minute time limit. 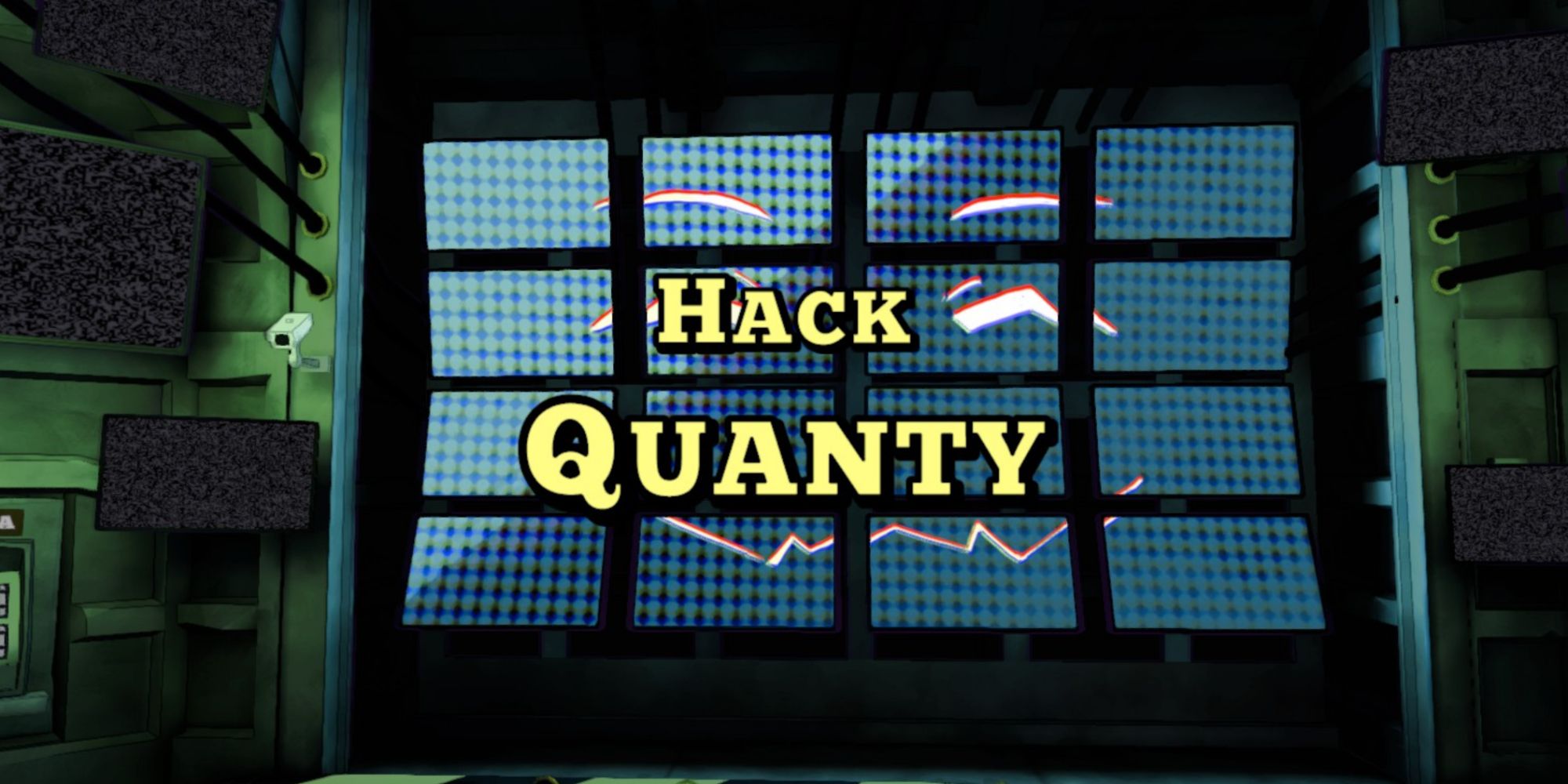 How To Restore Power

The first thing you'll need to do is restore power – Quanty has maliciously plunged the room into darkness to impede you. Luckily there's a generator that you'll find up against the wall to the right of Quanty's wall of screens. It's attached to a hamster wheel, but it's not a hamster we'll be catching to power up this room.

Instead, you'll find Turmeric the rat in the break room behind your starting location. She comes out of her hidey-hole to munch on a slice of floor pizza, but will scamper off if you get too close. Examine the wall on the other side of the room to see that Turmeric really likes doughnuts. As luck would have it, there's one in the vending machine.

How To Get The Donut From The Vending Machine

These things are never as simple as they should be. Taking one look at the vending machine reveals that you do not know the code to acquire a donut, and there doesn't seem to be an easy way to work it out. Luckily, a poster in the other room provides a hint as to this puzzle's solution – it's alphanumeric sudoku.

Sudoku Rules: Simply put, each horizontal line, vertical line, and four-space corner of the 'box' (read: vending machine sections) must contain exactly one A, B, C, and D, and also exactly one 1, 2, 3, and 4.

We start with some of the codes already inserted for us, so working out the rest is a relatively simple task. You can either do this yourself with a pen and paper (maybe a pencil would be better, in case you make a mistake) or use our completed grid provided below. We recommend trying it out yourself, though – sudokus are fun!

The fact that the sudoku uses both letters and numbers makes it easier to work out. You have more ways to whittle down the possible entries for a code, which makes the entire puzzle quicker to fill in.

As the donut is in the third section along on the top row, you need to enter 'C4' into the vending machine's keypad. But first, you need some coins! Pick up the Spare Change on the coffee table in the break room.

Now, place the Donut on the pile of dirty dishes near the floor pizza. Turmeric will come out of her hidey-hole and won't run away anymore – pick her up. Take her to the cage in the other room and place her inside – the room now has power!

How To Connect The Generator To The Mainframe

Despite Turmeric generating all that electricity, you have another problem on your hands – there are three missing Power Tubes that you'll need to find and replace before the room gets powered. They are found in the following places:

With those collected, return to the main room and place them in the gaps.

How To Deactivate The Lasers 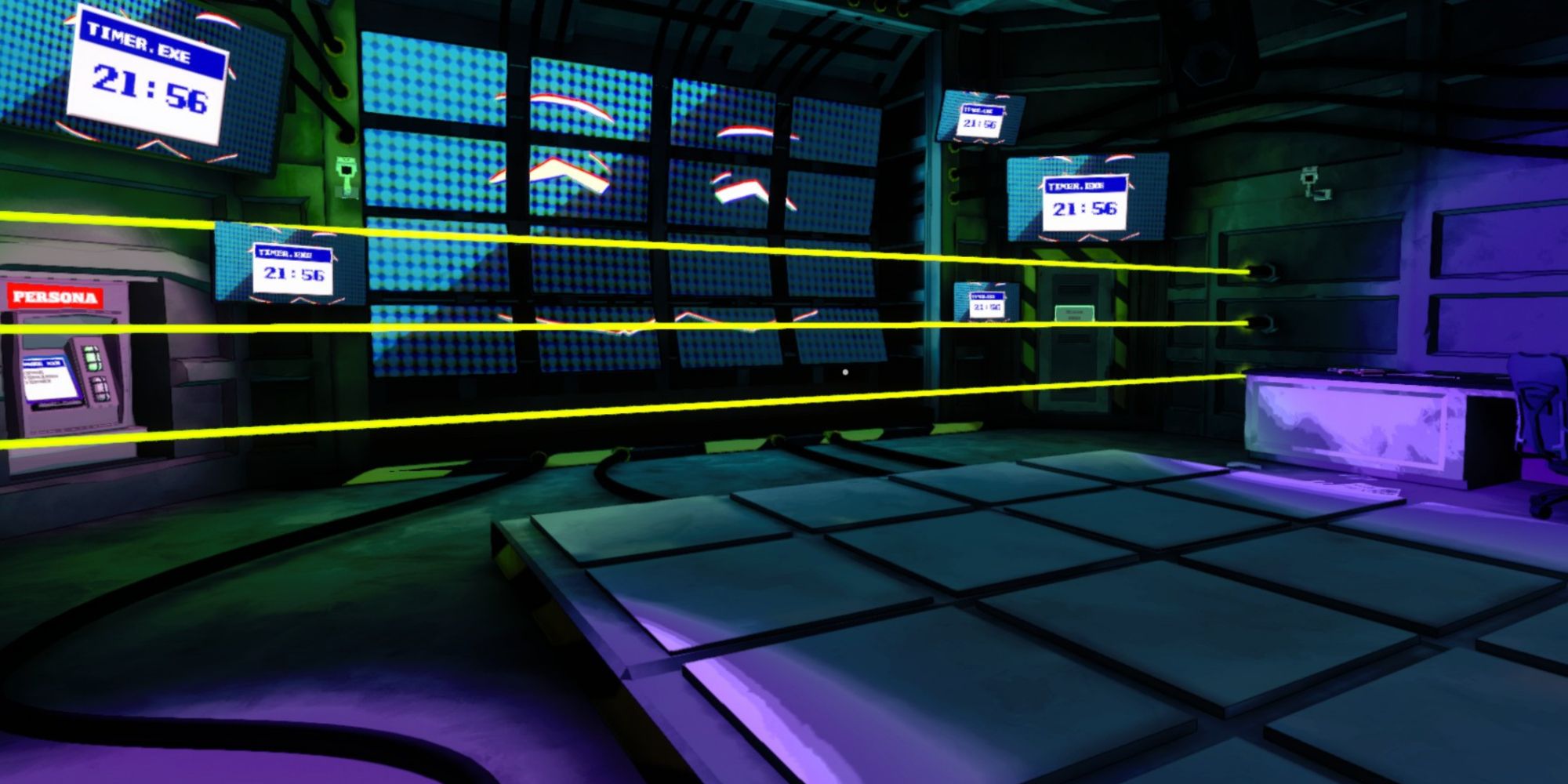 With the room powered, it is now split in half with devious lasers. You'll need to deactivate these to access the rest of the level. 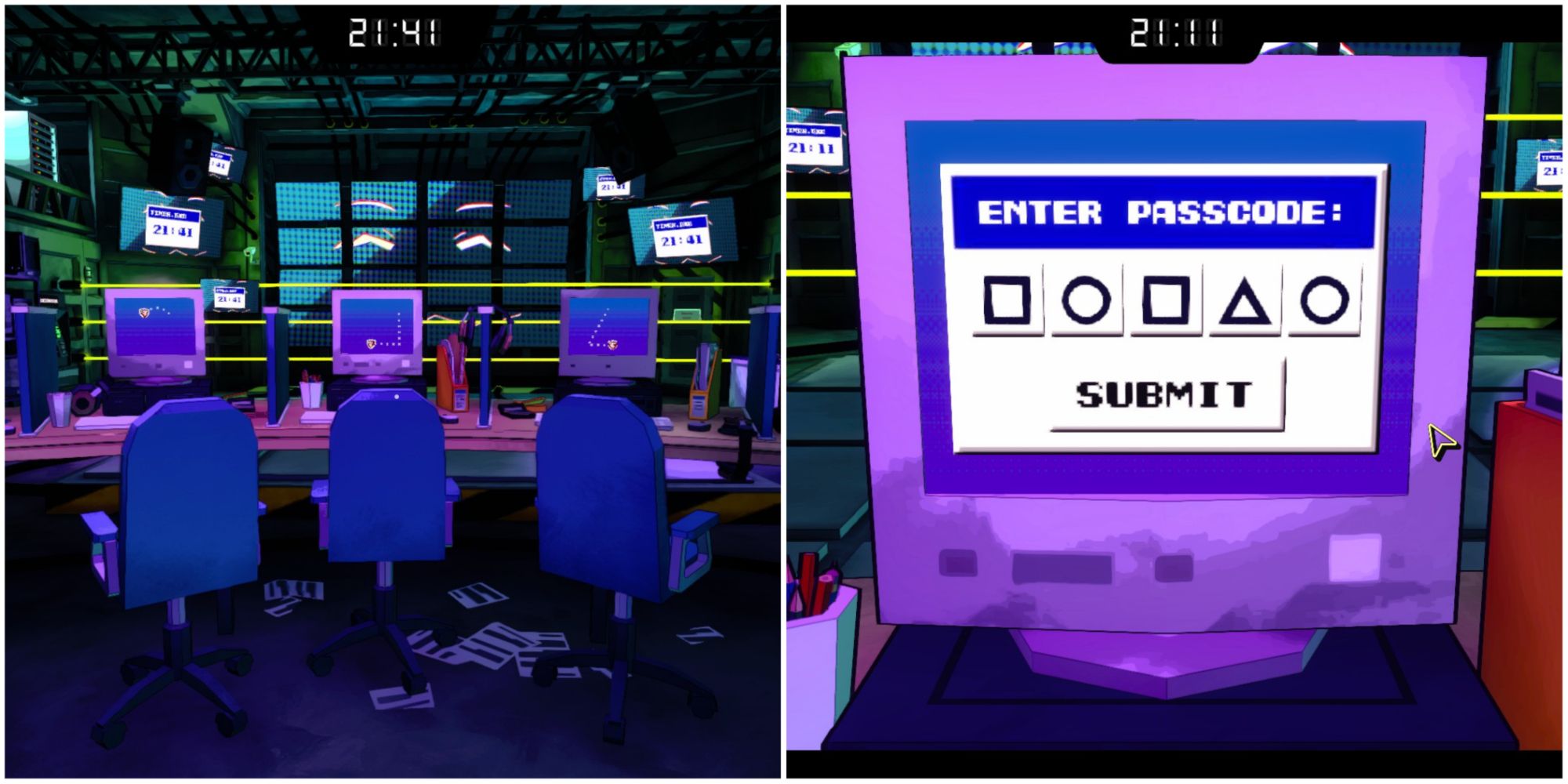 Firstly, you'll have to figure out the computer passcode. This is easily done by taking note of the screensavers that each computer has – in order. From left to right: Square, Circle, Square, Triangle, Circle. Enter this code into any of the computers, and they'll all let you use them.

The computer is needed to solve the next few puzzles, starting with figuring out the password to the laser control.

The laser control console can be quite hidden at first – it's to the right of the shelves of monitors, right next to the left-hand side of the laser wall itself.

Interact with the laser control console and click 'Forgot Password?' to find that you need to figure the name of Quanty's mother and the name of his dog. You'll find these by interacting with the computers you unlocked earlier.

Click on the Files icon and examine the MAMA and BARK files. MAMA reveals that Quanty's mother's name is Dell-ilah, and BARK reveals a dog named Sprocket.

Head back to the console and enter those words in the Forgot Password menu. You'll reset the password to 'SAFER' – enter that into the main screen to deactivate the lasers. 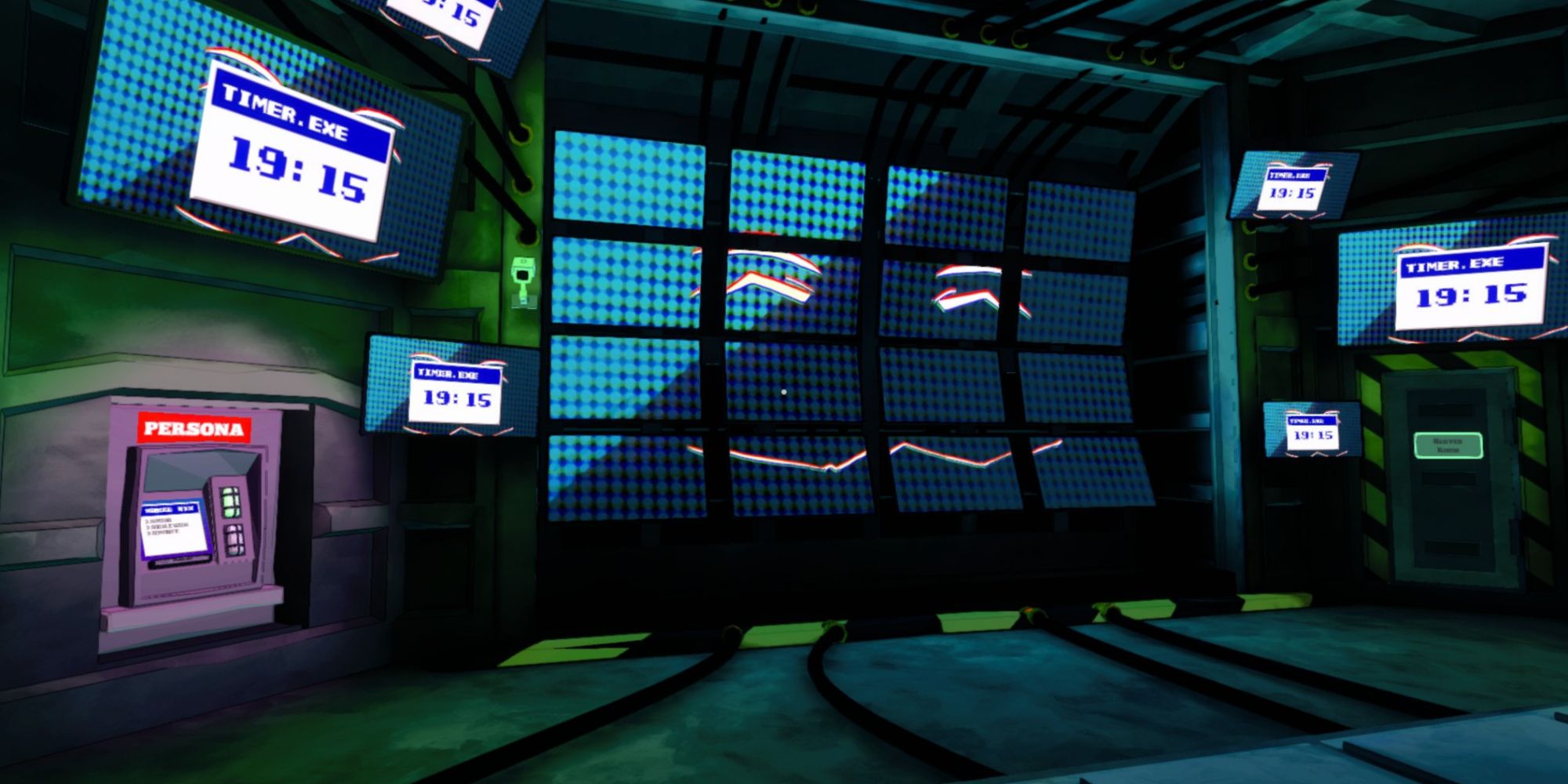 There's another console to mess with now, the Persona console. Interacting with it will prompt you to insert a disk – this is something we don't have at the moment. What we do have are computers with virus creation capabilities, a binary translator, and, thanks to the new console, Quanty's serial number: 13. 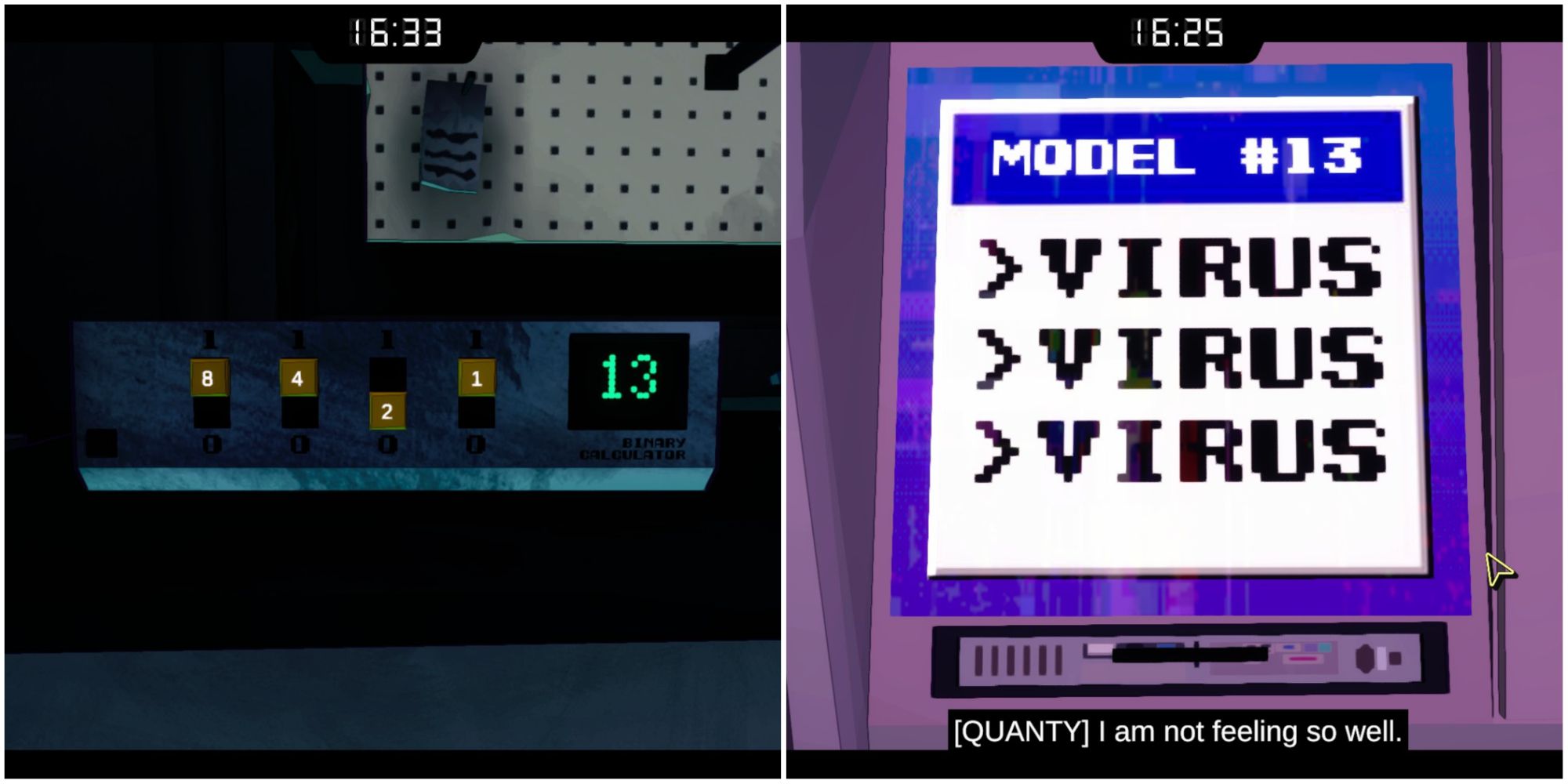 Trying to load up the virus creation program on a computer will quickly reveal that it uses a binary code, so entering '13' isn't going to be possible. Instead, use the binary translator on the desk to the left of the computers. Make the number 13 by adding up the numbers on the switches – numbers flipped upwards are added together; add the eight, four, and two. This gives you a binary code of 1101. Enter this into the virus program. 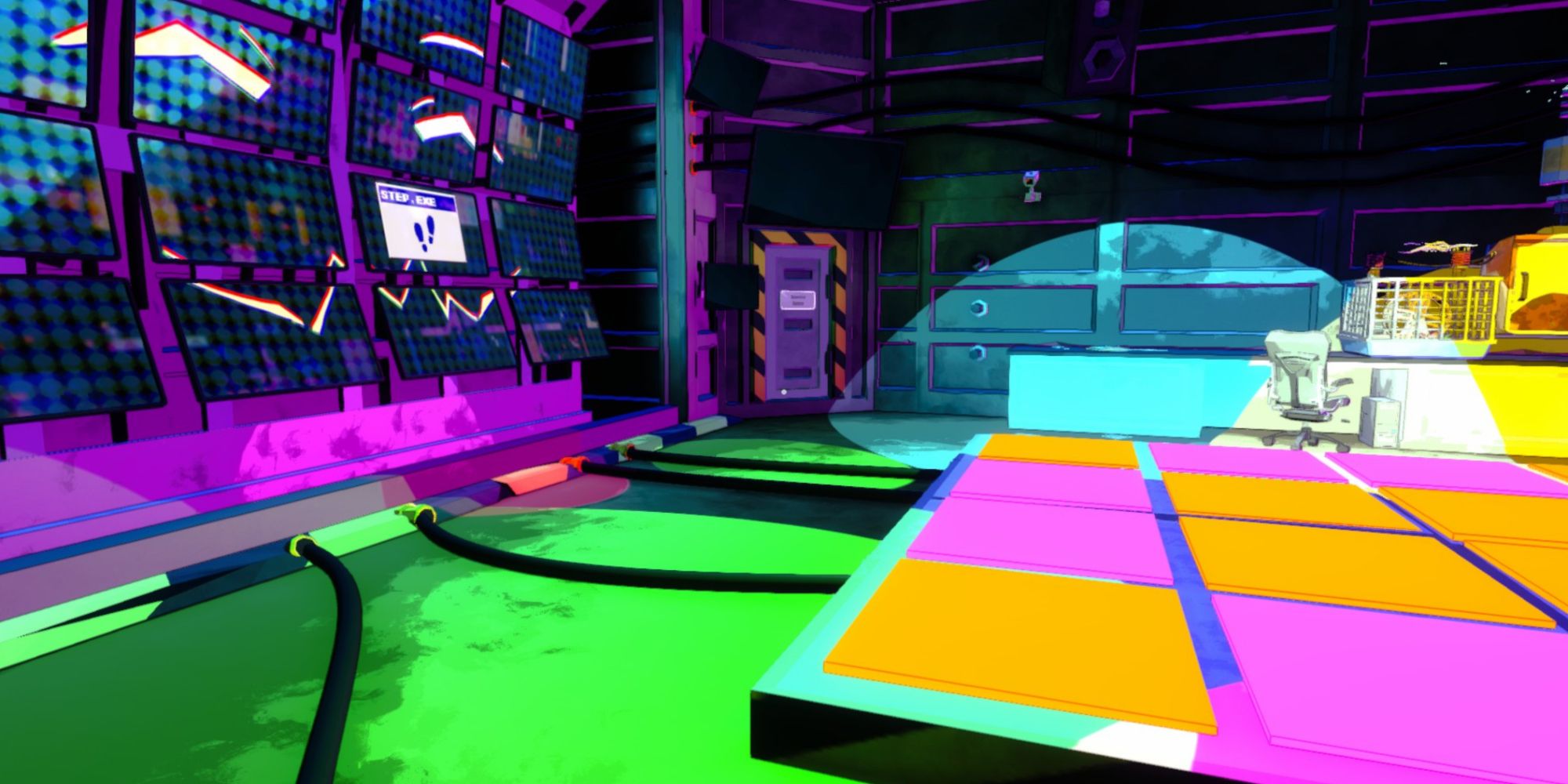 Pick up the resulting disk and put it in the Persona console. Sigh. Now we have to dance with Quanty. To solve this half of the puzzle, you'll have to follow the instructions displayed on the wall of screens, stepping on the floor panels that correspond to the screens that have Step.exe windows on them. Avoid the panels that have the Avoid.exe windows on them, or you'll have to restart the puzzle. 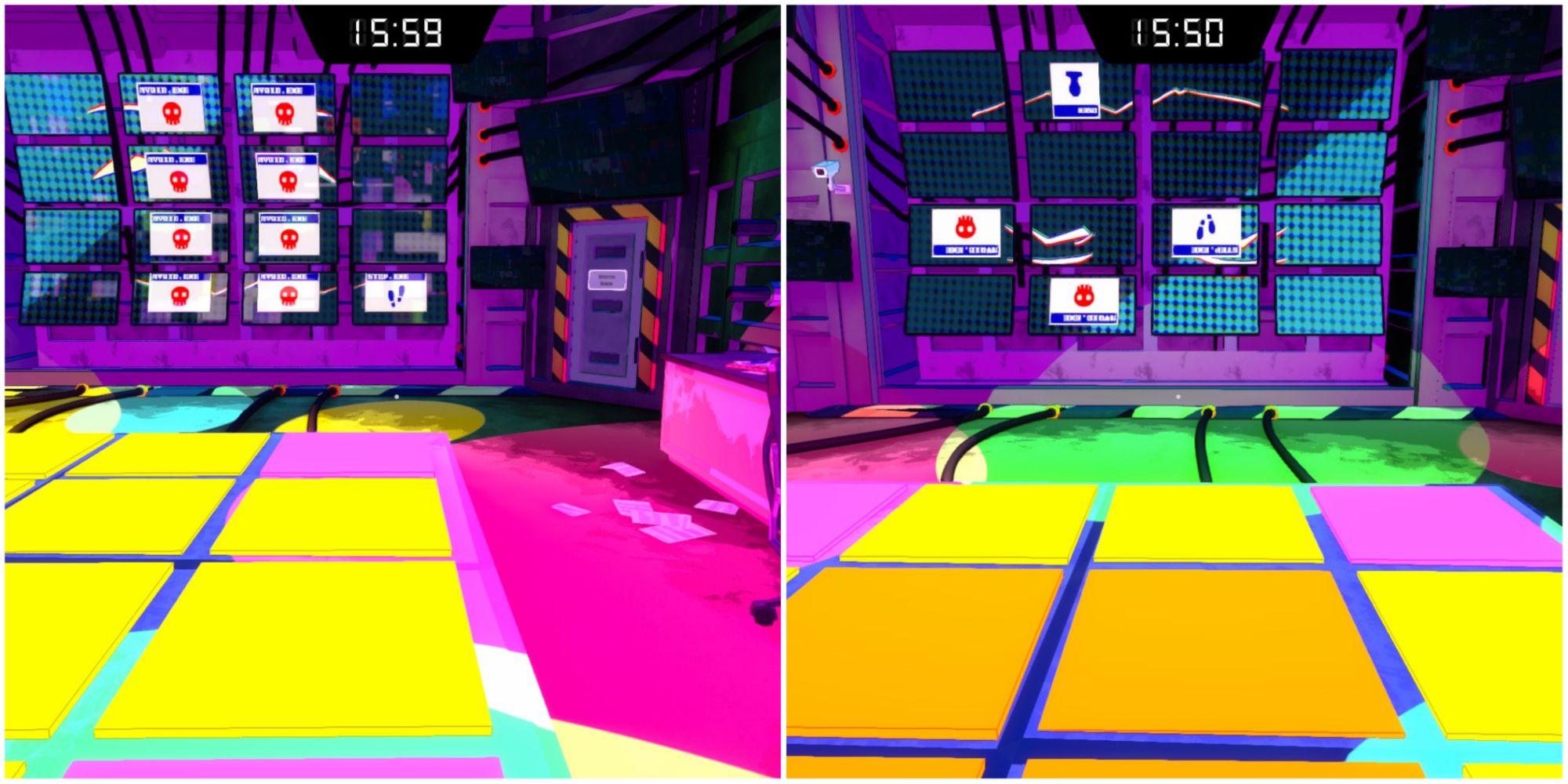 At one point, it will seem like you can't cross over the panels to get to the next Step.exe window. Just walk off the dancefloor altogether at this point. After this, Quanty will flip the display upside down – at this point, you'll have to think harder about your moves and take the flipped perspective into account. All in all, it's an easy puzzle, though.

Your reward? The server room.

How To Hack The Server Room 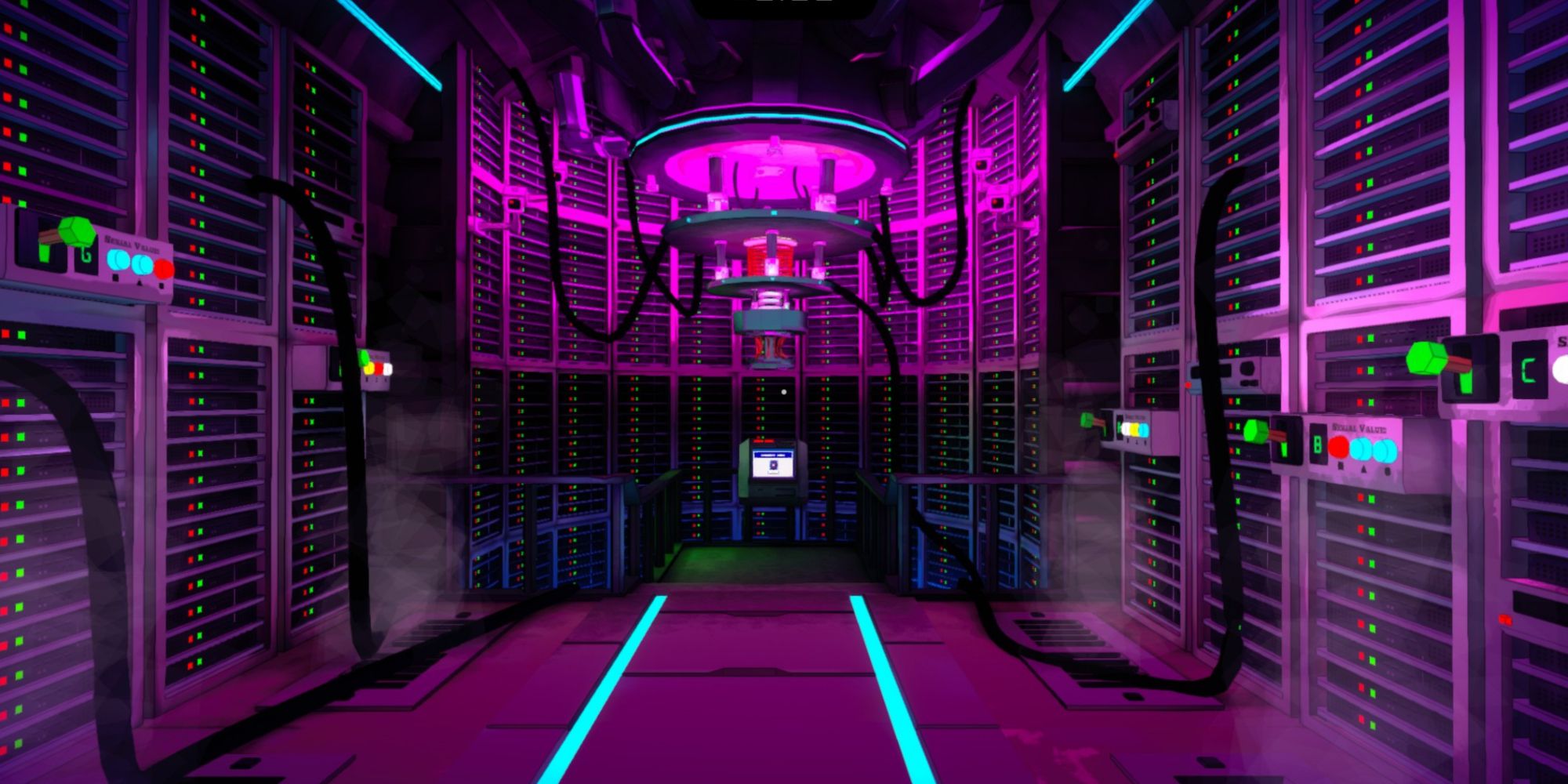 The final puzzle of this level is quite devilish if you can't figure out what it's asking you to do, but very simple once you know the trick. There are eight switches on the walls of the server room, labeled A through H. There's also a console at the end of the room – interact with it to start the puzzle. 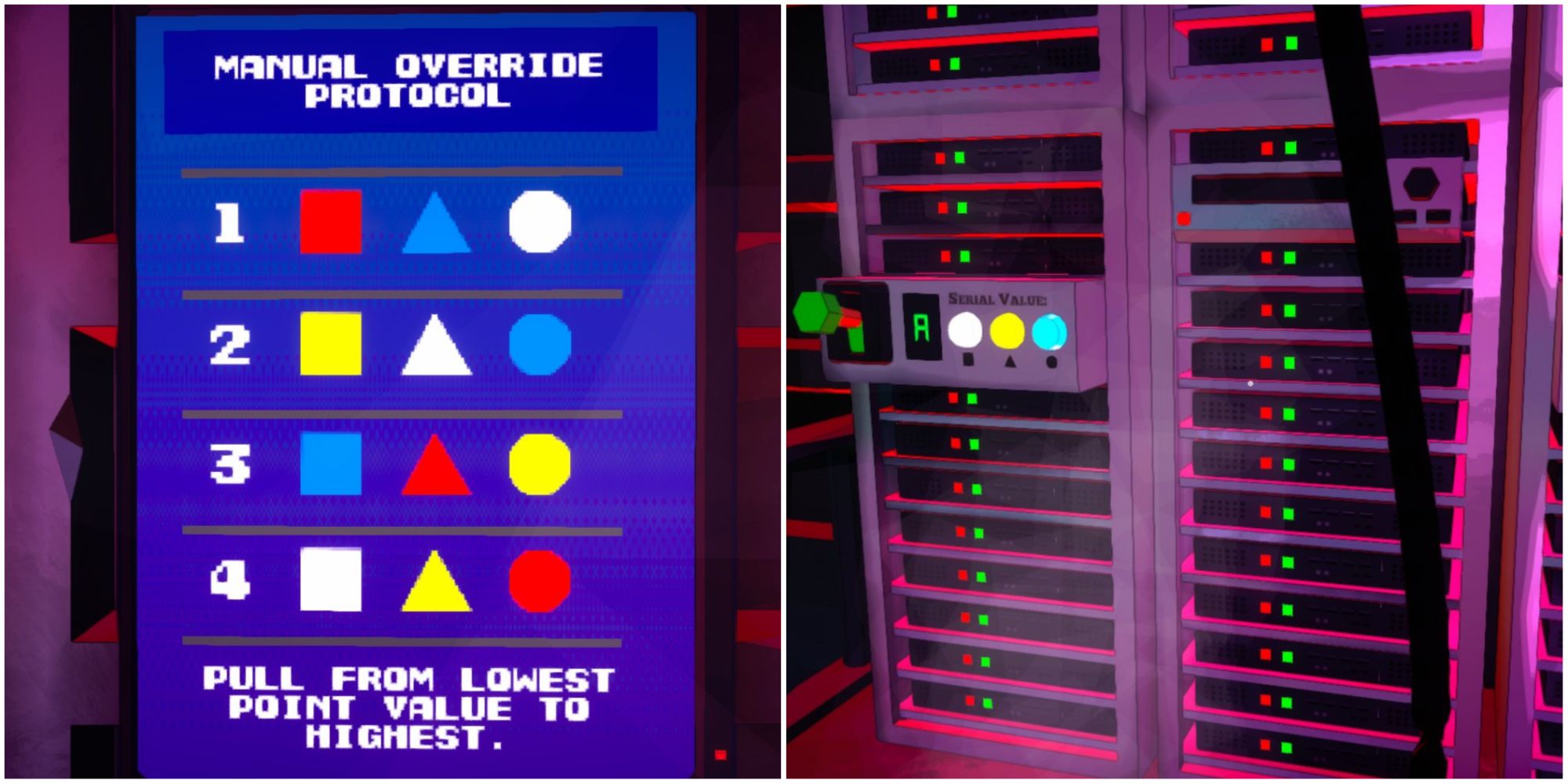 Examine the screen in the corner of the room that turned on when the puzzle started. It provides you with the key to this puzzle: you have to pull the switches in order from the lowest numerical value as dictated by the shapes and colors associated – every switch has three colored shapes on them.

It's easy to overcomplicate this puzzle for yourself, thinking there's a deeper meaning to the screen – there isn't. The shapes on the rows literally equate to their row's number. A red square is a one, a red triangle is a three, and so on. Write these values down (or use the table below) to figure out the numerical values of each switch in the server room.

With this cheat sheet, we can work out the values of each switch in the room. Each switch has a Square, a Triangle, and a Circle, always in that order.

Upon pulling the final lever, you'll have completed the level and kept your place at the academy!