Gambits are a mechanic unique to Final Fantasy 12. They allow you to set an AI routine for each character in the party, defining how they will act when set to auto-battle. This can save a lot of button inputs during routine battles and even streamline some boss fights.

The Gambit system has several moving parts and might be daunting to a beginner. This guide has everything you need to know about how Gambits work and how best to set them up so you can journey across Ivalice without fear.

How Do Gambits Work? 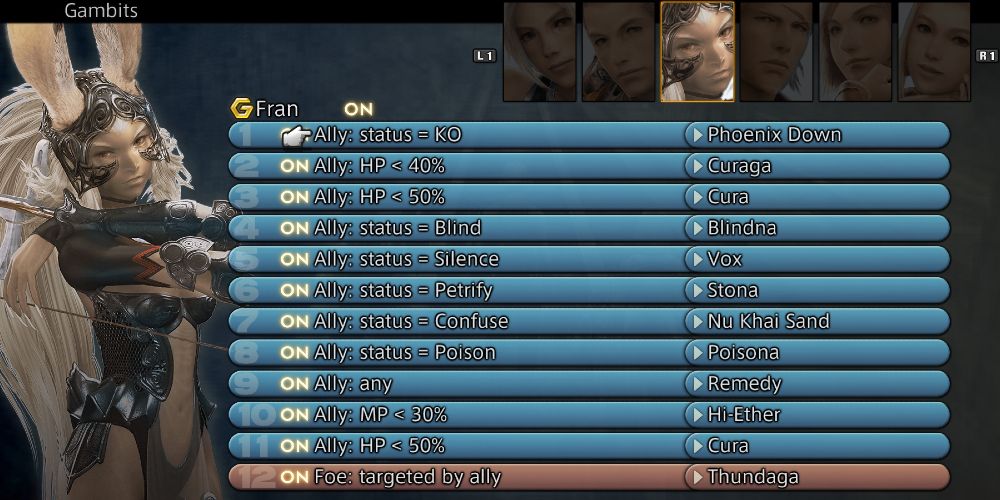 Gambits for each character can be set from the menu screen. Each Gambit is composed of a Condition and an Action, essentially making it an If/Then command. For example, a character with the Gambit "Ally: HP < 50% : Cure" will automatically cast Cure on any party member (including themselves) that is below half of their maximum Hit Points.

Characters with Gambits turned on will always attempt to complete their Gambits in order, starting from the top of the list. If a Gambit cannot be performed for any reason, they will move to the next one on the list and so on until they find a Gambit they can carry out. For sinstance, our healer in the example above will ignore their Cure Gambit and try the next one down if there is no party member below half health or if they are unable to cast Cure, usually due to a lack of MP or the Silence status effect.

Each character, including the party leader, can have their Gambits turned on or off at the player's discretion. A character whose Gambits are turned off will perform no actions unless given a manual command by the player. By contrast, a manual command given to a character whose Gambits are turned on will take precedence over any Gambits they would otherwise carry out.

Every character has their own Gambit list, so the Gambits you set for Vaan will not directly affect the actions of Penelo, Basch, or any of the other party members. However, the actions carried out by one character's Gambits can cause another character's Gambits to trigger. For example, suppose Ashe has a Gambit to cast Bravery on Basch if he doesn't already have it, and Balthier has a Gambit to cast Haste on any ally who has Bravery. Once Ashe's spell lands, if Balthier's Gambit has a higher priority than any other valid Gambit he will start casting Haste at the first opportunity. Each character can individually unlock more Gambit slots from their License Board.

What Are The Best Ways To Set Up Gambits? 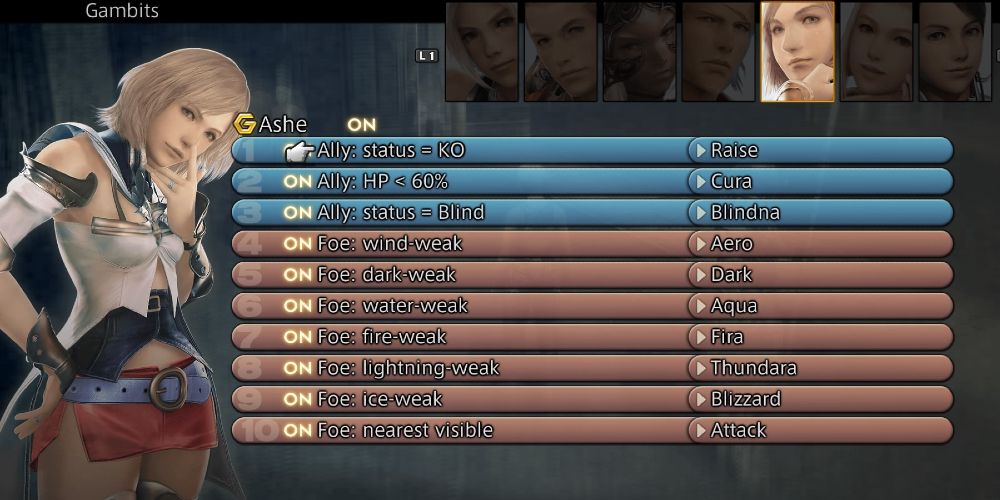 Since Gambits are carried out in order, you'll want to have high-priority actions that need to be taken immediately at the top of each list. The bottom of the list should be reserved for default actions like basic attacks. It's not that you don't want these actions to be carried out, but rather that you want to be sure you're properly set up before doing so. Here are some sample Gambit lists that can improve your party's efficiency easily, without having to rely on intricate combos.

If all party members have Regen or the healer is unable to cast the spell, they then check to see if any ally is below half of their maximum HP and casts Cure on a valid target. If none of these actions can be carried out, the healer instead makes a physical attack targeting the same enemy that the party leader is currently targeting.

This is an MP-heavy Gambit that demonstrates how easy it can be to automate setup for attacks using the Gambit system. First, the character checks to see if their own MP is under twenty percent of its maximum value. If so, they drink an Ether to top themselves up. If that isn't necessary, they then cast Faith on themselves, if they don't already have it. You can also set up another character to cast Faith on them to spread the MP cost around, but for the sake of simplicity, we're having our caster do it themselves.

If the character doesn't need an Ether or a Faith cast, they cast Oil on the enemy currently targeted by the party leader. Once the character has enough MP, is buffed with Faith, and the target is debuffed with Oil, the character will continuously cast Fira until the Oiled enemy is no more (which shouldn't be long).

There are almost infinite different Gambit combinations in Final Fantasy 12. Don't be afraid to experiment with different builds – if all else fails, you can always turn them off and fight manually until you work out the bugs.