Every time Final Fantasy 14 receives new content — whether that's as a new patch or a shiny new expansion — players flock to earn themselves the most coveted out of all of the fresh items. These are usually minions, mounts, and of course — gear that is crying out to be glamoured onto your equipment.

With the launch of Endwalker, new special boss FATEs have been added, including one that is the key to getting some rather awesome items — 'Devout Pilgrims vs. Daivadipa'. Here's everything you need to know about spawning this FATE and the rewards you can snag by completing it.

How To Spawn The Devout Pilgrims vs. Daivadipa Boss FATE 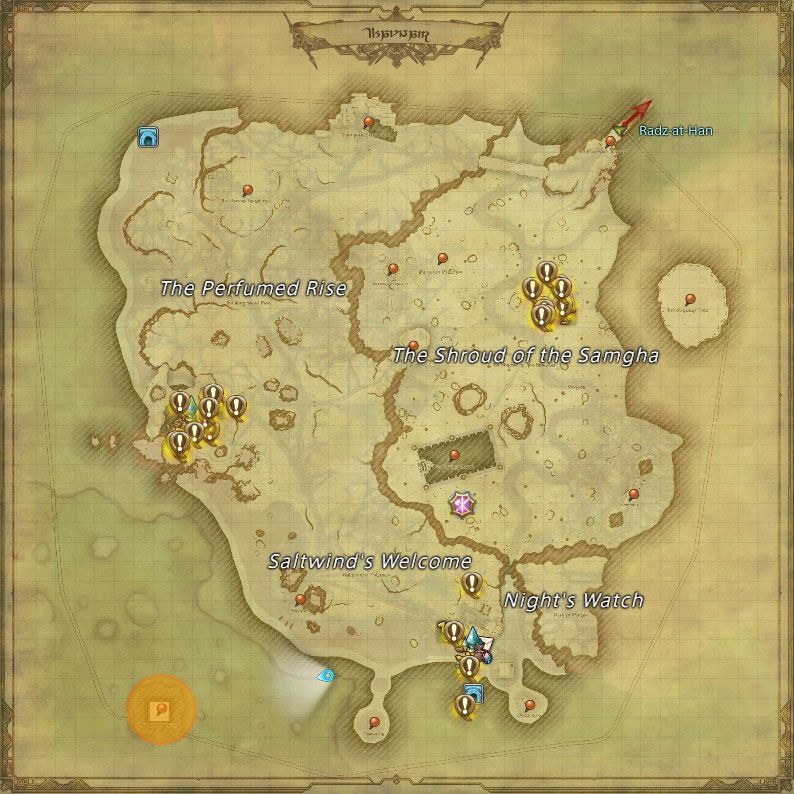 The 'Devout Pilgrims vs. Daivadipa' boss FATE spawns in Thavnair on the square platform around (X:9.3, Y:3737), as shown on the map above, so you'll need to be able to fly to reach this location. (We have a guide on how to get all Aether Currents in Thavnair here.) However, it'll only pop when certain requirements have been met. As a chain FATE, the following FATEs must be completed first, in any order:

Additionally, 'Devout Pilgrims vs. Daivadipa' only spawns during a certain window of opportunity. Once it has been killed, it won't spawn again for at least another 36 hours. You can check the current status of the window for your world on Faloop.

While we have multiple instances per zone for Endwalker's launch, this means you have three different windows to watch out for. During the window, you want to keep completing the two FATEs mentioned above to try and trigger spawning 'Devout Pilgrims vs. Daivadipa'.

As a rare boss FATE, 'Devout Pilgrims vs. Daivadipa' will not appear on the map when it is active, but will appear on your mini-map if you are close enough to its spawn area.

Completing the FATE will reward you with the 'Don't Go into the Light' achievement and some Daivadipa's Beads.

For successfully completing 'Devout Pilgrims vs. Daivadipa' you will be rewarded with Daivadipa's Beads — the number of beads you earn is dependant on your rating for completing the FATE:

Joining a party with others to complete the FATE is the best way to ensure you'll score a Gold Rating at the end of it.

Once you have some beads, you can exchange them with Nesvaaz, who can be found in Radz-at-Han at (X:10.5 Y:10.1) and offers the following wares:

Of course, if you want all of the items purchasable with Daivadipa's Beads, you'll need to complete the FATE with a Gold Rating three times.