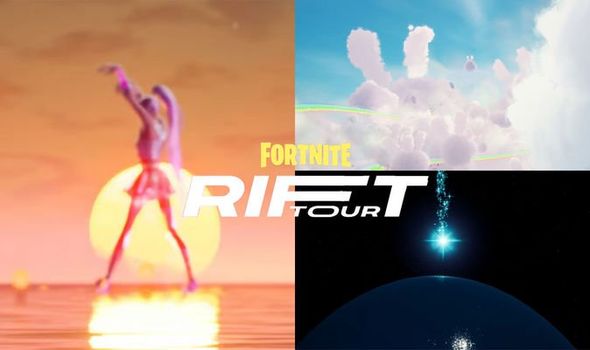 Fortnite is hosting its latest series of in-game concerts this week, which will be headlined by pop superstar Ariana Grande. The Thank U, Next singer will be performing five in-game concerts on the Fortnite Battle Royale map over the coming days. This blockbuster Fortnite season 7 live event has been dubbed the Rift Tour by Epic Games.

The Fortnite makers said the concerts will take gamers on “a musical journey into magical new realities where Fortnite and Ariana Grande collide”.

If you’re hoping to attend the upcoming Fortnite Ariana Grande event – either as a seasoned Battle Royale player or for the first-time – then Express.co.uk is here to help.

We have rounded up everything you need to know about the Fortnite live event, including details on the start date and time, how to attend the Ariana Grande concert, an important server warning and a full schedule list for the concerts.

The Fortnite season 7 live event kicks off at 6pm eastern time, but you’ll want to head into Battle Royale well before then.

For those in other time zones, the Fortnite Ariana Grande events kick off at 3pm pacific time and 11pm BST on Friday August 6, with a 12am CEST start time for Saturday August 7.

Epic Games is advising Fortnite fans to head into Battle Royale one hour before the listed start times.

This is for every show on the Fortnite Rift Tour.

Given how popular Ariana is, Epic Games is probably expecting a huge crowd for the inaugural Fortnite Rift Tour concert.

The event may even set new records for Fortnite, so having people in as early as possible will help the servers out with any upcoming heavy duty work.

Epic Games said: “We recommend fans arrive in Fortnite 60 minutes before showtime, and the Rift Tour Playlist should be live 30 minutes before each show. Before Ariana’s arrival, the Rift Tour kicks off with Fortnite-themed experiences — pairing popular tracks with moments based on elements from the game.”

FORTNITE ARIANA GRANDE EVENT – WHAT HAPPENS IF I MISS THIS FRIDAY’S SHOW? WILL THERE BE ENCORES?

If, for whatever reason, you’re not able to tune in to the Fortnite Ariana Grande event then there will be encores.

In total there will be five performances for the Fortnite Rift Tour.

So if you miss out on this Friday’s show you’ll have plenty of opportunities to tune in over the weekend.

Is this your first time playing Fortnite? Do you love Ariana and want to tune in to the concert, but not sure exactly what you have to do to see the performance?

Don’t worry, we’ve got a few pointers to help out. Firstly, you’ll want to make sure you have Fortnite installed to start with.

Unfortunately, if you have an iPhone or iPad you won’t be able to install Fortnite.

And if you have a Google smartphone you won’t be able to download Fortnite from the Play Store either.

If you’ve got an Android phone you’ll instead need to head to this website to get started.

You will be able to download and install Fortnite also on a wide range of gaming consoles and PCs.

• Download the latest update: Ahead of the Rift Tour’s first show on August 6, make sure you’ve downloaded the v17.30 game update. Give yourself time to download the game so you’re ready to go before the show.

• Get in the game early! We recommend loading up Fortnite 60 minutes before your selected showtime. You can expect the Rift Tour Playlist to go live 30 minutes ahead of each show.

• Our goal is to accommodate everyone possible, but if capacity is reached, please join us for one of the other shows.

• Encore Shows! The Rift Tour dates are NOT region locked, but we’ve selected times to make sure everyone has a chance to attend.

Yes, there is! If you’d rather you can instead watch a stream of the Fortnite live event on Twitch.

Plenty of content creators will be streaming the Fortnite Ariana Grande concert this week.

Simply head to the Fortnite Twitch page and choose a stream to watch.

If you click on one stream and the picture quality isn’t ideal then just try another. You may find streams that have less viewers watching will be more stable.