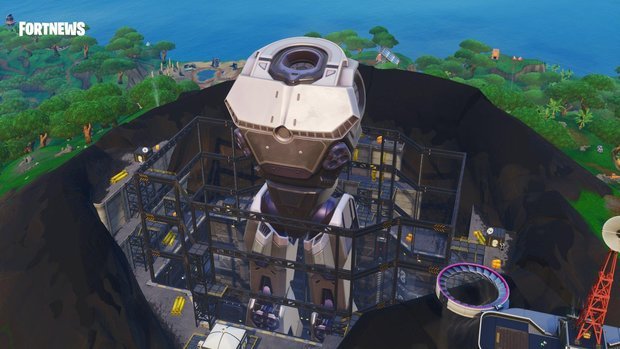 For one thing, we might see and learn more about the impending Season 9 event. Currently it looks like the next in-game event will bepitting a giant monster against a giant robot being constructed on the island.

Earlier today the robot grew a torso, and it’s slowly progressing every couple of days.

A countdown cllock has also recently leaked and as per @LucasYoshi, it seems as though this is going to be for a countdown days in advance of the event.

“Worth noting the “day” part of it, which clearly means we will be getting this countdown several days before the event instead of the previous 24 hour countdowns” claimed the Fortnite dataminer.

Either way, the update coming tomorrow isn’t likely to change much with the game, but we might see some more subtle map changes, like, for instance, the numerous warning signs and propaganda posters seen spotted around the island (via FortniteInsider)

The in-game news feed is also bizarrely unhelpful this week, offering no clues to as to changes that the game could make. That is, unless there isn’t any big sweeping changes to the game this week.

That said, there’s a variety of issues that still need fixing and according to the games Trello board, some are fixed and likely to be deployed in a future release. Annoyingly some are problems which were listed as ‘fixed’ for the next release as far back as last week.

We can only cross out fingers and hope they’ll be sorted this week.

For Battle Royale players one issue involves problems with players and traps, which are sometimes invisible. Not very helpful. Likewise, some players have complained of issues picking up items, but this again is fixed in a future release.

In Creative Part of the mountain textures in Canyon Island are exposed (still), revealing a flat textured wall jutting from the side of the cliff. Again this should be fixed soon, but who can tell at this stage.

Over on the games Save the World mode, Epic has noted two issues which are fixed in the next release, this includes: “Slow Fields visual is extremely bright around the edges” and another issue with the Plasmatron 9000 having a slower than intended fire rate.

Android Voice Chat issues have been causing problems for mobile players for some time and though it is listed as ‘Fixed in next release’ on the games Trello board, we suspect that it still won’t be fixed.