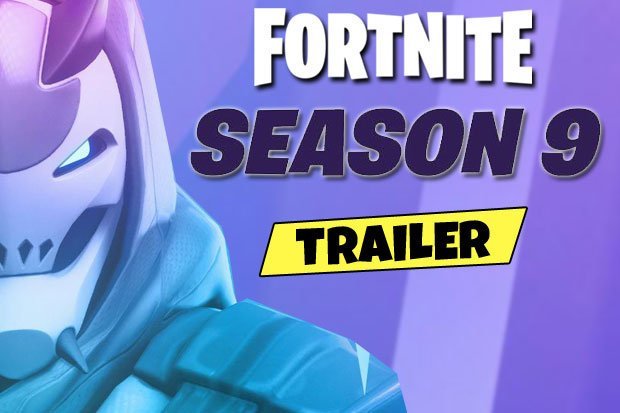 Fortnite Season 9 is within touching distance and is set to drop in less than 24 hours time, releasing on Thursday, May 9th 2019. That’s right, tomorrow!

We’ve seen plenty of clues to show the direction this latest season is headed, with a sci-fi come futuristic tinge to all three of the Fortnite Season 9 Teaser posters revealed so far.

Following on from the slightly bugger Unvaulted event and that massive volcano eruption decimating Retail Row and Tilted Towers, it’s no surprise that players are keen to see where Epic Games are taking the game next.

However, these posters have also been somewhat limited compared to the Season 7 and Season 8 posters which also gave a few more glimpses as to how the map might also be overhauled.

We saw sneaky teasers for ziplines and more obvious outlines of the giant Volcano that dominated the map this season.

For the time being though, the Season 9 posters have focused more on the skins. That’s why it’s vitally important you watch the Fortnite Season 9 Trailer when it drops.

As most players will probably know by now, Epic Games usually drop two trailers for each new season launch and it’s unlikely that the developer will change their plans for Season 9.

The first is normally a cinematic trailer, providing a more story-driven look at the overall season themes, new skins, added points of interest on the map and much more.

Whilst the second trailer is usually your run of the mill Battle Pass trailer, showcasing in more detail what you’ll be able to earn through the rigorous 100 tiers and rewards on offer.

So now you know what’s coming you’ll probably want to know when they drop?

Epic Games should confirm later this evening when they plan to take the game offline for scheduled maintenance to update the game to the most recent Fortnite 9.00 Update.

Scheduled maintenance is expected to last for a couple of hours and as you might imagine will mean the game will be offline. This is for all platforms, including PS4, Xbox, Nintendo Switch, PC and Mobile.

Judging by past season launches we’re expecting downtime to begin at around 9am BST, which would mean trailers should drop somewhere between 9am and 10am tomorrow morning, May 9.

As soon as these trailers drop we’re also expecting new pages on the Fortnite website to go live with details about the new Battle Pass and anything else Epic Games have up their sleeve.

Although we might also get some clues from the new patch notes which should also drop at roughly the same time too.

Stay tuned for more details – because as with everything, there’s likely to be a few leaks in the run-up to the new season as well.