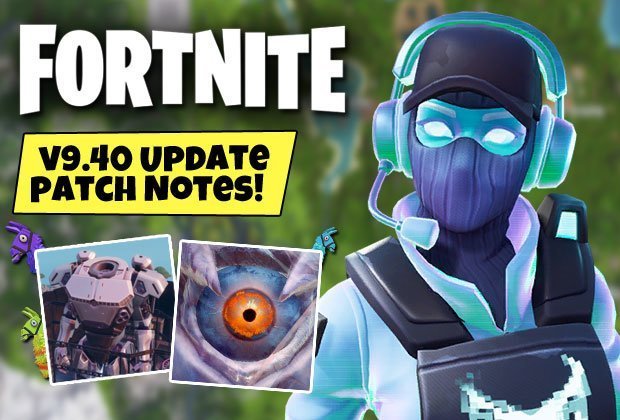 Brace yourselves, gamers – Fortnite is due for a big update tomorrow.

Tomorrow’s big update (the title update for Tuesday 16th July, 2019) will be the first major update the game will receive in three weeks.

For the past three weeks, Fortnite has only been getting ‘content updates’ – smaller and less impactful patches that don’t alter as much in-game as these bigger patches do.

So what can we expect from the incoming update? Well, this close to Season 10, we know the Epic will be doing some interesting stuff (and you may want to keep your eye on the giant robot and massive ocular mass moving around the map).

This update, like most previous updates, will likely drop tomorrow morning. They normally arrive at 9am BST with downtime shortly afterwards.

Assuming there is downtime, which we imagine will be a giving after 3 weeks of content updates, it’s likely going to be announced tonight, so stay tuned for more info in the coming hours.

The good news is that patch notes normally drop 20 to 30 minutes before the games update arrives or the game itself goes offline. So we’ll have something to read at least.

Keep reading and take a look below for all the things we’re expecting to see in the upcoming – potentially final – Season 9 update.

It looks like Season 10 is just around the corner. That means this update will add any new skins remaining in Season 9 to the game.

Be prepared for some surprises and some cool additions to the skin roster.

It’s also not unreasonable to assume there will hints at what Season 10 will hold in the incoming patch: Fortnite has a rich history of leakers datamining the life out of end-of-Season patches and uncovering more hints about the shape of the next Season map, or the events that will take us into the next chapter of the game’s history.

We know there will likely be a new incoming event that will change the map (see below), but we just have to wait and see if our predictions will be proved correct.

There is supposed to be a new LTM announced tomorrow, too – but there are scant few details about this available at time of writing.

The two unofficially-named entities in the current Fortnite map are theoretically going to throw down in some Godzilla-inspired kaiju action.

Codenamed “Doggus”, there is a massive robot being constructed by a mechanical drone in the middle of the Fortnite map. The robot’s slow assembly has recently seen the addition of a jetpack, which has fans speculating that Doggus will take on the thing recently released from Polar Peak (affectionately named Cattus) in the skies.

Epic itself has reinforced this theory with posters that are starting to appear in the game that suggests “when danger strikes”, the aerial platforms are going to start moving and transporting players elsewhere.

More flavour images, or details about where the platforms could be going, may appear in the code for the new patch – we’ll keep you updated as soon as we find out more.

Countdown timers in the sky suggest that the new event will take place at July 20 at 3 pm EST – that’s 8pm UK time.

As usual, Blizzard will be sorting out a variety of issues in the next update to Fornite – here’s what we can see will be updated, thanks to the Fortnite Trello board. These will be fixed in the next release:

• Traps sometimes rise into structures’ ceilings and therefore cannot be seen by players.
• Players may experience issues picking up items
• Part of the mountain textures are exposed, revealing a flat textured wall jutting from the side of the cliff.
• There are reports that Creative maps are changing directions upon publishing. The minimap also changes, rotating 180 degrees.
• Chest in Neo Tilted is unopenable
• Players are experiencing voice chat issues on the Android platform.