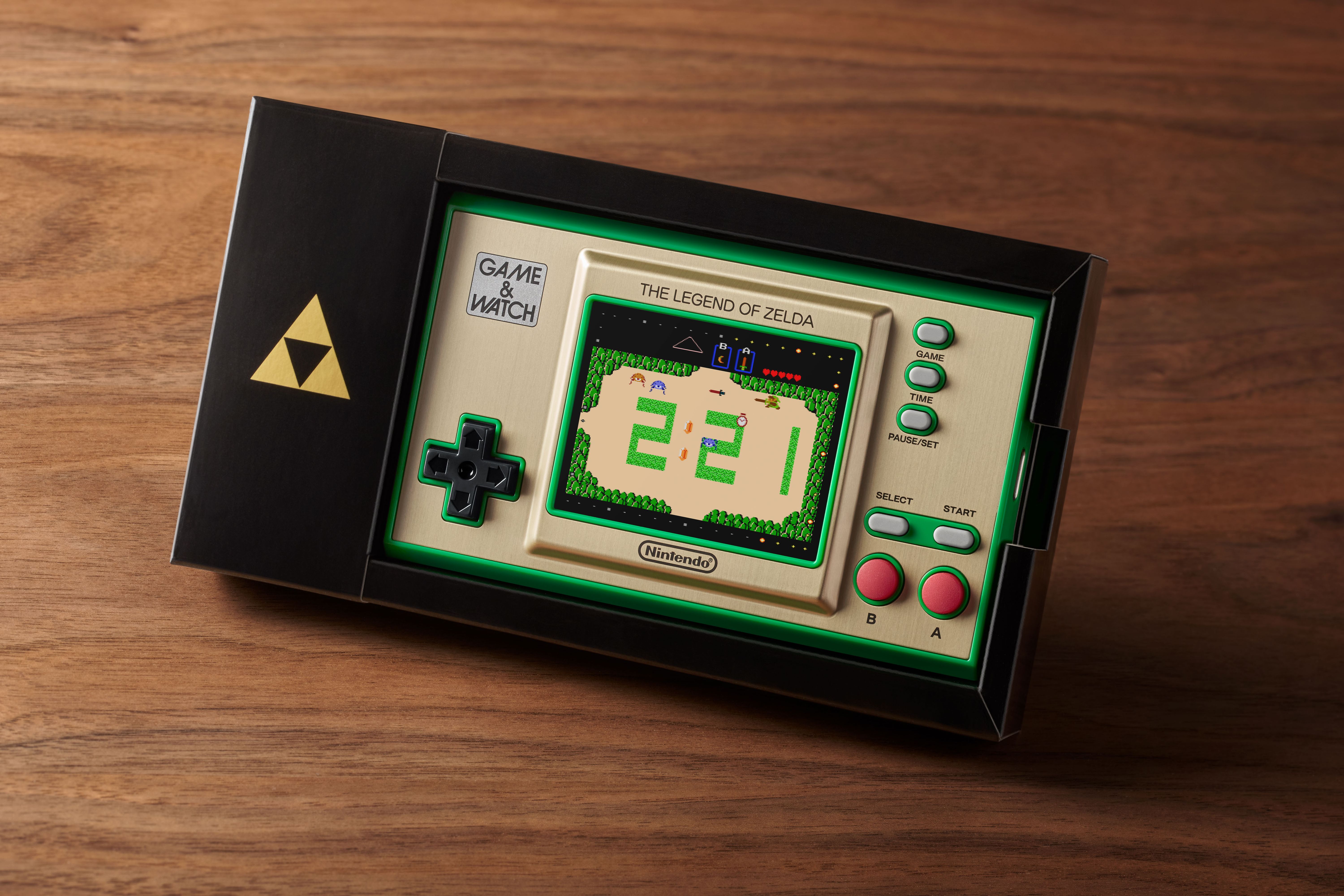 It doesn’t really make sense to talk about Nintendo acting strangely, since that is their default state of being. However, the one thing that’s stuck out to us recently is the peculiar way they approach anniversaries. For no apparent reason, they made a huge fuss for the 35th anniversary of Super Mario Bros. last year and yet completely ignored the 40th anniversary of both Mario and Donkey Kong this year.

Unless the number 35 holds some special significance in Japan, and we don’t believe it does, the real reason for the promotion is probably that they didn’t have any new games ready last Christmas and so manufactured a celebration out of thin air. At the same time, rumours suggest that they did have a new Donkey Kong game planned but it got delayed because of the pandemic. Not that it really matters though, especially as it has all led to this: one of the most fun bits of Legend Of Zelda merchandise in years.

As you would expect from more complex action adventures, the original two Zelda games have not aged quite so gracefully as Super Mario Bros. They’re still perfectly playable – with most of the problems with Zelda 2 having been there from the start – but they’re extremely unforgiving in their difficulty, in a way that only really old video games ever are. In most modern re-releases, such as via Nintendo Switch Online, this is compensated for via quick loading save states but there’s no such safety net here.

In the context of the Game & Watch though – Nintendo’s range of 80s handhelds that contained a single LCD game – it makes sense and rather than having to worry about how the games look on a modern HDTV everything is squashed down into a tiny, non-widescreen display that’s much closer to how people would’ve played the games back in the day. The action buttons are perhaps a bit too close to the bottom of the device, but the D-pad is surprisingly decent; so as long as you don’t have giant hands you should do well.

Link’s Awakening is a bit of an odd inclusion, because it’s not the DX version from the Game Boy Color and it actually came out after A Link To The Past on the SNES, but presumably it’s included here simply because it feels more retro. Whatever the reason, it’s easily the most replayable of the three games, and while with the other two you constantly have to make excuses for their age Link’s Awakening is still a delight, and it’s no wonder it was the 2D game chosen for a Switch remake back in 2019.

In reality, nobody’s going to be buying this – or, more likely, receiving it as a gift – if they haven’t played the games before. Although it is a perfectly appropriate way to discover them for the first time, the whole package is designed to be a celebration of old school Zelda, rather than just a delivery system for retro games.

As with the Super Mario Bros. device, even the packaging brings a smile to your face, once you realise that the Zelda details are painted onto the plastic sleeve and the actual box is made to look like an ordinary version of 1980 game Vermin. This is because, again like the Mario edition, there’s a redressed version of one of the original Game & Watch titles included as bonus, in this case starring Link as he plays whack-a-mole with octoroks.

There’s also a survival mode based on Zelda 2, where you have to survive waves of enemies for a set period of time, and an interactive clock that plays scenes from the original game on its own in the background – but which you can take over at any time.

It’s a package that’s clearly been put together with a lot of love, from the gold and green design of the device itself to the little glow in the dark Triforce on the back. Responding to criticism of the Super Mario device you can even make a stand out of the inner carton, which also has its own little Triforce painted on.

The original Japanese Famicom versions of the games, which are quite a bit different if you can read the text, are also included. Although the actual Game & Watch Zelda game, that was released back in 1989 and is an entirely original title, is not featured. That’s relatively understandable though as it was a dual-screen device, like the Nintendo DS.

At £44.99 the Legend Of Zelda Game & Watch is not even that expensive, for what is clearly meant to be a luxury item, and at time of press it’s still in stock at the Nintendo website. We’d be very happy to see this become an ongoing series, with perhaps Metroid being next – although it’s never wise to assume there’s any kind of predictable logic to Nintendo’s actions.

As inscrutable as they may be, when Nintendo do make an effort the end result is almost always worth it, and if you’re looking for a fun Christmas present for the Zelda fan in your life this fits the bill perfectly.