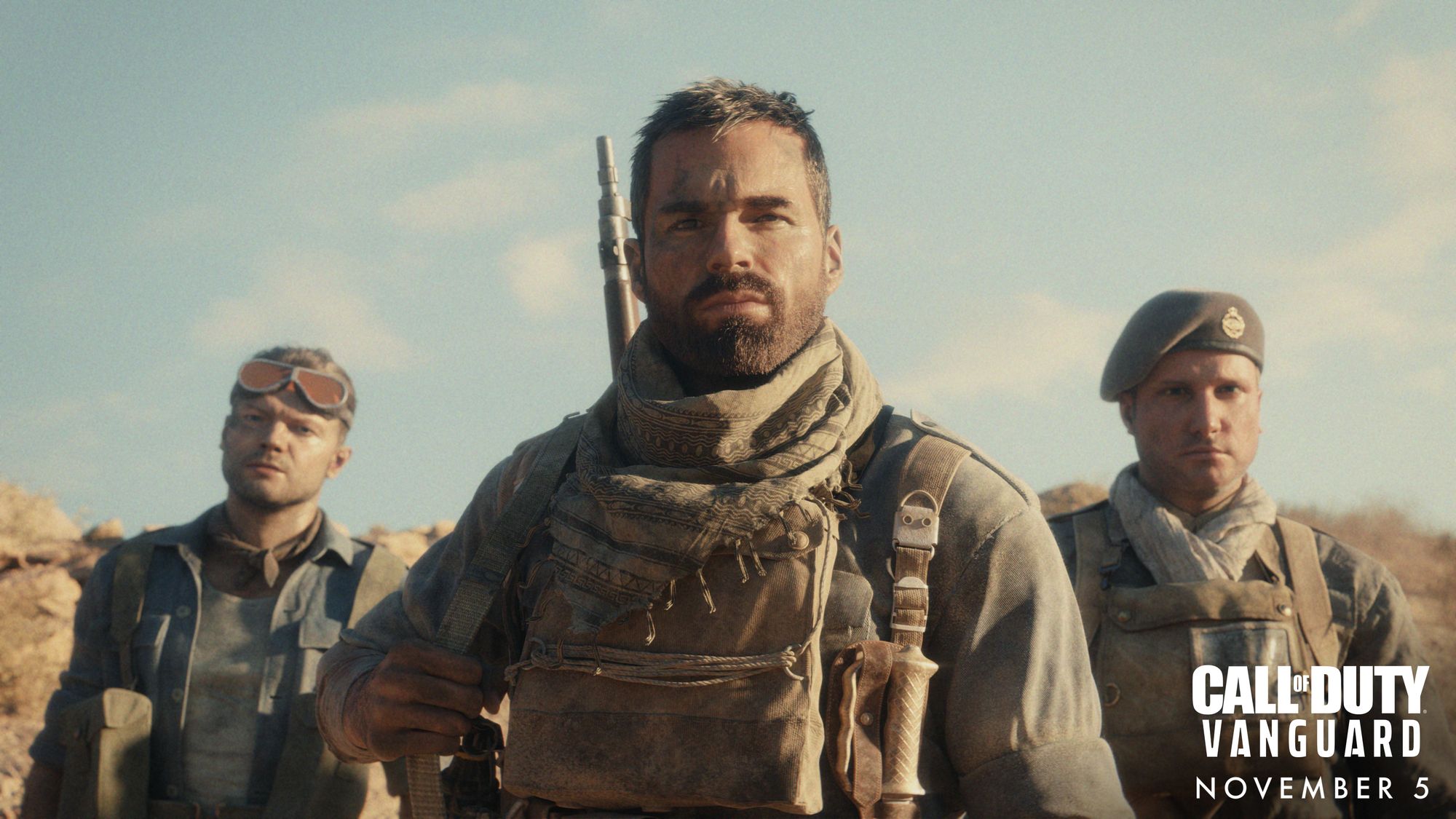 The Tuesday Inbox has a theory about Sega and Microsoft’s new super games, as a reader is suspicious about Call Of Duty 2023 rumours.

Negative vibes
I do not really get all of the negativity around Call Of Duty: Vanguard. It’s a Call Of Duty game, you know EXACTLY what you are getting. If you don’t like that kind of game then play one you do like – simple as! I played over 150 hours of Black Ops Cold War over the past 12 months and was ready for a new setting and new maps, so am always happy to pay year on year for the latest game.

Quite happy with the WW2 theme, it can’t be Modern Warfare every year and the new, larger maps and the extra destructible walls do add a new element to the multiplayer. I never really play the campaign much, just always straight into the online multiplayer.

I’ve tried other new games recently, such as Insurgency: Sandstorm and Hell Let Loose but you spend half your time running around an empty map. Nothing gives you that instant hit that Call Of Duty does and at the pace it plays. So I’m happy with my purchase and have had a blast with it over the weekend and am sure I will do for the next 12 months until the next game comes along.
Saints Stickman (gamertag)

Welcome improvement
I’m enjoying Call Of Duty: Vanguard! It’s a totally different game to Cold War, which is good because I really did not enjoy Cold War (especially the jumping and shooting).

Vanguard is much closer to feeling like Modern Warfare. This will tide me over until the new year when I finally buy a PlayStation 5 and get Battlefield 2042.
TommyFatFingers

Sensible priorities
I’ve been playing Forza Horizon 5 with early access, it’s fantastic and fully deserves the praise it’s getting. It is Forza Horizon 4 but a bit better and quite a bit bigger map wise. Seeing as I’ve heard some say they felt Forza Horizon 4 was too much like number 3 I think it’s fair to say, like the recent Metroid Dread, that it’s fine but the next one in the series will have to shake things up a bit.

My only personal irk is the performance mode targeting 4K, and this is a bit of an extension of a recent Inbox letter who felt chasing 4K had hampered graphical development. For me 4K’s main collateral damage is frame rate. Both the quality mode and performance mode target 4K. According to Digital Foundry both hit a native 4K with drops down to 1600p.

I’ve tried the quality mode and it’s a looker all right but I love the extra smoothness of 60fps, so have played in performance mode. My order of technical priorities when running a game are framerate, graphics, then resolution. I game on a 27 inch 1080p 144Hz monitor. Could there not be a 1080p, 60fps quality option where the ‘LOD transitions’ are just as smooth as the quality mode if the lowest the resolution is getting is 1600p in performance mode. If I was on PC I would first lower the resolution to 1080p. Anyway, whatever you pick, quality or performance mode, it’s a slick, fun game.
Simundo

GC: LOD stands for level of detail. The transition is a kind of pop-in, where you see an object transform from a low polygon model to a more complex one when you get closer to it. Ideally it happens when you’re too far away to notice, but not always.

One of many
Just read your article on the amount of players Forza Horizon 5 has even before release and I’m one of the people that bought the premium add-on bundle.

I knew it would be when I saw the first trailer, for me it’s perfect for this time of year when it’s dark and cold. The setting in Mexico is fantastic, very colourful and beautiful!

The game is also excellent, truly worthy of all the critical acclaim and no doubt all the sales it’s already made.

I have just one gripe with it in that there aren’t many new cars… being a car fan it’s disappointing to see a lot of old models of performance cars such as the Porsche 911 GT3 and Turbo S instead of their newest iterations, the same with the BMW M cars and Audi RS.

Still there are a few cracking new cars and the game is so much fun.

Having to look after a severely autistic child means I don’t get to go out and socialise much, so games are increasingly important to help me relax now. Tho’ complicated games such as XCOM 2 and Divinity: Original Sin are out of the question as I simply don’t have time.

Sequel fears
I’ve got a nasty feeling that BioWare are going to get really defensive about Andromeda and rather than sweeping it under the carpet – which would be super easy because it’s a spin-off and the main team didn’t even make it – they’re going to make it a key part of the new game, maybe even a direct sequel.

I don’t know why, I don’t know anyone that would actually want that, but all the hints and clues so far have included some pretty obvious references to Andromeda that you really wouldn’t have thought was necessary at this stage.

At least it’s the A-team making the game this time, so it could turn out well but we’re only two teaser images into so far and I’m already worried.
Casper

Regarding Dolby Vision, I’m not sure you’ve understood this technology. Firstly, Dolby Vision requires a minimum of 10-bit HDR support, which won’t be found on budget TVs. It’s actually developed with 12-bit support in mind, which requires up to 10,000 nits, although such TV panels don’t currently exist – so support is currently limited up to 4,000 nits.

On top of this, Dolby Vision supports the facility to dynamically adjust the image based on metadata contained within the image to calibrate the scene correctly, whereas HDR10 only calibrates based on one point of data.

Also, they have developed something called Dolby Vision IQ, which uses the sensor on your TV to autodetect changes in ambient light and adjust the scene accordingly to keep the scene lighting correct.

However, you still need a TV with HDR10 capabilities. It can’t make up for a lack of brightness to start with, as you can’t get the high contrast range without brightness. Similarly, without local dimming of some capacity you get light bleed, meaning your blacks aren’t as black as they should be.

No software can make up for this and, as you can imagine, these features described above for Dolby Vision will not be on a budget TV.
Kiran

I’m stuck on Forza Horizon 5, I just cannot seem to progress in the game at all. Can you help me?

Yes, go to the Microsoft Store and purchase the VIP pack. This will help you to get credits faster in the game.

Buying prestige
I don’t want to rag on Sega too much but… Microsoft has given them a billion dollars to make a ‘super game’?! Did Phil Spencer buy some magic beans off them while he was at it? I know we don’t know for sure if Microsoft has given them all the money but since every Sega game for the last two decades looks like it had a budget of 50p and a packet crisps I think it’s reasonable to assume that’s where the money has come from.

I mean, respect to Sega if they managed to convince Microsoft that they could provide said super game, despite having made nothing of value since the Mega Drive era (except PC strategy games, apparently – the least Sega thing ever). If they were such good negotiators what have they been doing for so long in the doldrums?

Although I guess we’re in a world now where instead of companies making games themselves they just go and buy someone else and get them to do it for them. I’m sure Sega could pick up some very talented studios for $1 billion but if that’s the plan why didn’t Microsoft just buy them themselves? Unless… it’s because Microsoft, as US company, can’t for legal reasons and this is them getting Sega to buy Japanese developers for them by proxy? Still… Sega. Knowing them they’ll lose the cheque down the back of the sofa or buy the wrong company by mistake.
Baker

Inbox also-rans
For those who might be interested Forza Horizon 5 Premium Edition is available on ShopTo for £64.85.
Mike

Now Call Of Duty 2023 is being leaked? Hasn’t it always been said that Activision themselves are behind most COD leaks? That must mean they’re feeling pretty desperate about Vanguard.
Toblerino

This week’s Hot Topic
The subject for this weekend’s Inbox was suggested by reader Fellows, who asks what is your favourite boss battle of the modern era?

Which game from the PlayStation 3, 4, or 5 era have you enjoyed the most and why? How do they compare to older style boss battles and what do you think of the current standard of boss fights – especially those from Western developers, who traditionally aren’t as good at them?