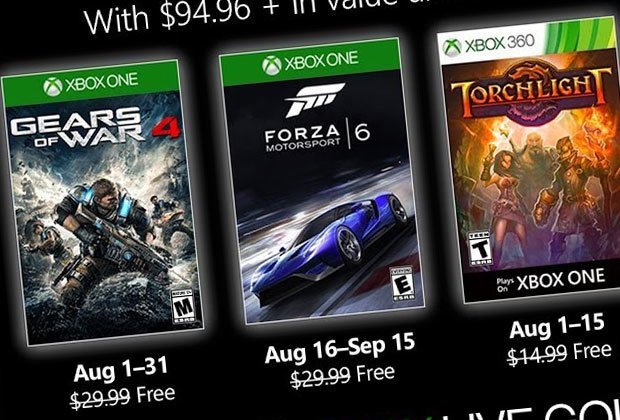 Major Nelson has just announced the new Games with Gold titles for August 2019 and it includes a quite breathtaking lineup of titles.

Xbox Live users can download Gears of War 4 and Forza Motorsport 6 on Xbox One, whilst Torchlight and Castlevania Lords of Shadow are both available as Xbox 360 titles.

Obviously, the 360 games are also playable on Xbox One thanks to backwards compatibility.

Compared to the lacklustre Games with Gold lineup in July, this month’s games sure are a decent bunch and will be tough to beat for Xbox’s main competition in the form of PS4’s PlayStation Plus games.

According to Major Nelson, August’s lineup provides over $94 dollars in value and up to 6200 in gamerscore.

As a reminder, here are the dates you want to earmark for your calendar:

Keep reading for more info on each of the four titles available this month.

A new saga begins for one of the most acclaimed video game franchises in history. After narrowly escaping an attack on their village, JD Fenix and his friends, Kait and Del, must rescue the ones they love and discover the source of a monstrous new enemy.

Forza Motorsport 6 is unrelenting action at simulation speed in the most beautiful and comprehensive racing game of this generation. Collect, customise, and race over 450 Forzavista™ cars, all with working cockpits and full damage. Compete in epic 24-player races across 26 world-famous locales. Master wet weather and night racing on your road to victory.

Welcome to Torchlight! A boom town founded on the discovery of rich veins of Ember, a rare and mysterious ore with the power to enchant or corrupt all that it touches. Emboldened by its power, legions of twisted creatures have begun to swarm up from the tunnels and caves below town. Explore the depths, collect loot, and level up as you save Torchlight – and possibly the world.

It is the end of days and ungodly powers isolate the Earth. The world’s alliance with the heavens has been threatened by a dark and malevolent force – the mysterious Lords of Shadow. Across this shattered land, the souls of the dead wander unable to find peace, whilst creatures of evil wreak chaos and death upon the living.

Gabriel Belmont is a member of the Brotherhood of Light, an elite group of holy knights who protect and defend the innocent against the supernatural. His beloved wife was brutally murdered by the evil forces of darkness and her soul trapped for eternity. Neither living nor dead she realizes the horrific truth of what is at stake and guides Gabriel to his destiny and hopefully salvation for the world.