It's been a while since Travelers first set foot in the world of Teyvat with the release of Genshin Impact. After all this time, the developers are still striving to improve the game with every update, which involves releasing new areas like Sumeru Desert alongside the Version 3.1 update.

Candace was the first four-star released in the game who belonged to the Desert area. Her harsh habitat has given her a solid and intimidating personality. The character can become your best friend and your worst nightmare at the same time, and her abilities reflect the same. 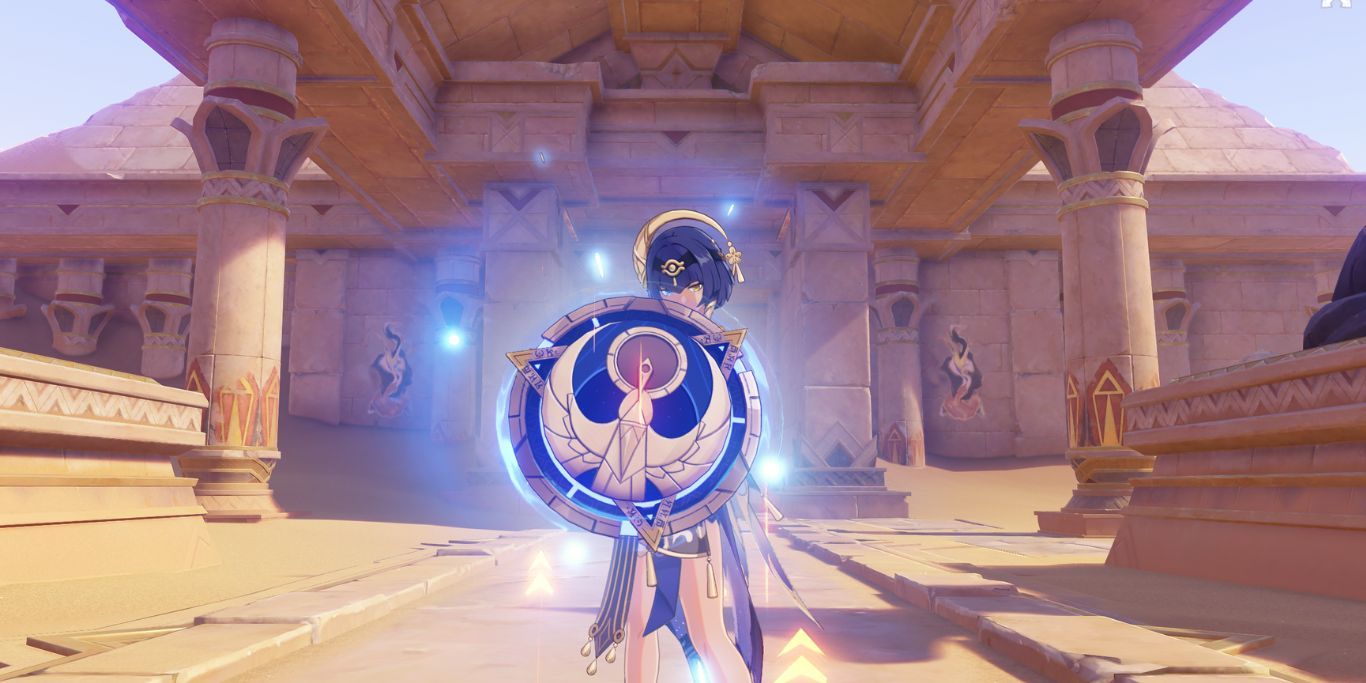 While her talents and constellations allow for a wide range of builds, Candace's most intuitive build revolves around being a Hydro element buffer. This is mainly because her burst infuses the active character's normal attacks with Hydro, given that they are Sword, Claymore, or Polearm users.

Further, her passive talent Celestial Dome of Sand gives you 0.5 percent more Elemental DMG from normal attacks for every 1,000 HP you have. This can be combined with the Hydro Resonance in Genshin Impact.

Hydro Resonance triggers when you're using two or more Hydro characters. With this resonance, all your party members get an increased 25 percent HP, stacking with the passive to increase DMG.

The only problem with this build is that there aren't many good Polearms to go along with it. Black Tassel is a three-star weapon, but it's the only one suited for this because you need as much HP as you can get on Candace.

Although, this weapon's passive is very niche considering there aren't many slimes in the open world, especially when you progress to regions like Inazuma or Sumeru. But if you do end up fighting slimes, your DMG will be increased by 40 to 80 percent.

The Tenacity of the Millelith artifact set can be farmed from the Ridge Watch domain located on the northwestern side of Dragonspine. Here are the set bonuses provided by these artifact pieces:

While this artifact doesn't completely synergize with Candace, the HP increase from its two-piece bonus is significant. Further, your Elemental Skill has a cooldown of six seconds, which makes the four-piece bonus have a downtime of only three seconds as well.

Unfortunately, the main source of damage for Hydro DPS characters like Kamisato Ayato or Tartaglia comes from their Elemental Skill, which means that they aren't a good fit for this build. Instead, you can use characters like Xingqiu to deal a ton of Hydro DMG to the opponents. 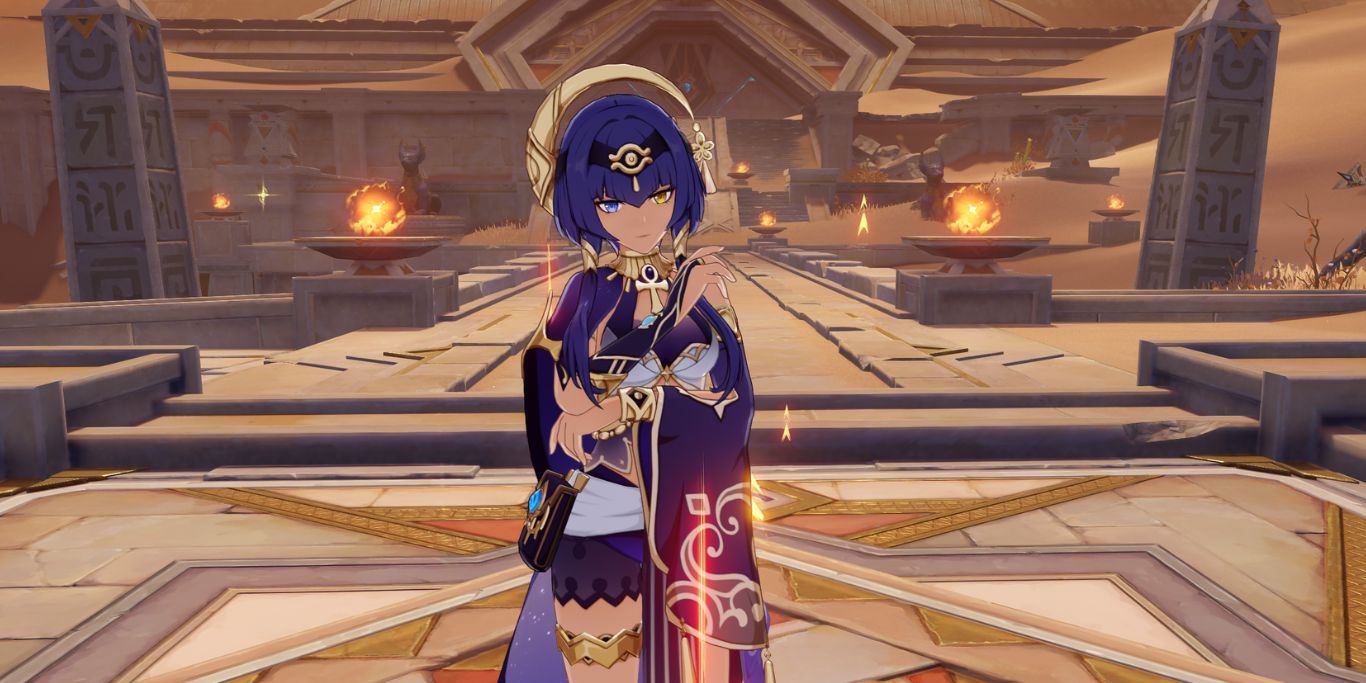 Hydro is one of the central elements when it comes to major reactions in Genshin Impact like Vaporize, Electro-charged, Freeze, or Bloom. All of these reactions either deal a huge amount of damage to the enemy or crowd-control them heavily.

While Candace doesn't deal much off-field Hydro DMG on the base level, her sixth constellation (listed below) can change this. With the constant Hydro application from the rippling wave of her Burst and this constellation, you can make a reaction-based build involving Candace.

This can be combined with Xingqiu or Yelan to apply even more Hydro on the enemy, and trigger the Resonance effect at the same time. Both Yelan and Candace deal DMG based on their HP, and they both benefit from this Resonance.

Although, if you're still not able to get Candace's Burst back fast enough, you can go for The Catch which is a weapon you can unlock via Fishing. The DMG from her sixth constellation is considered as Elemental Burst DMG, allowing you to use this weapon's passive as well.

Gilded Dreams and Noblesse Oblige are the perfect artifact sets for this build. The former allows you to have more Elemental Mastery, while the latter increases your Elemental Burst DMG.

Noblesse also buffs the ATK of your party members after using your Elemental Burst, which lets you deal even more damage from the elemental reactions. 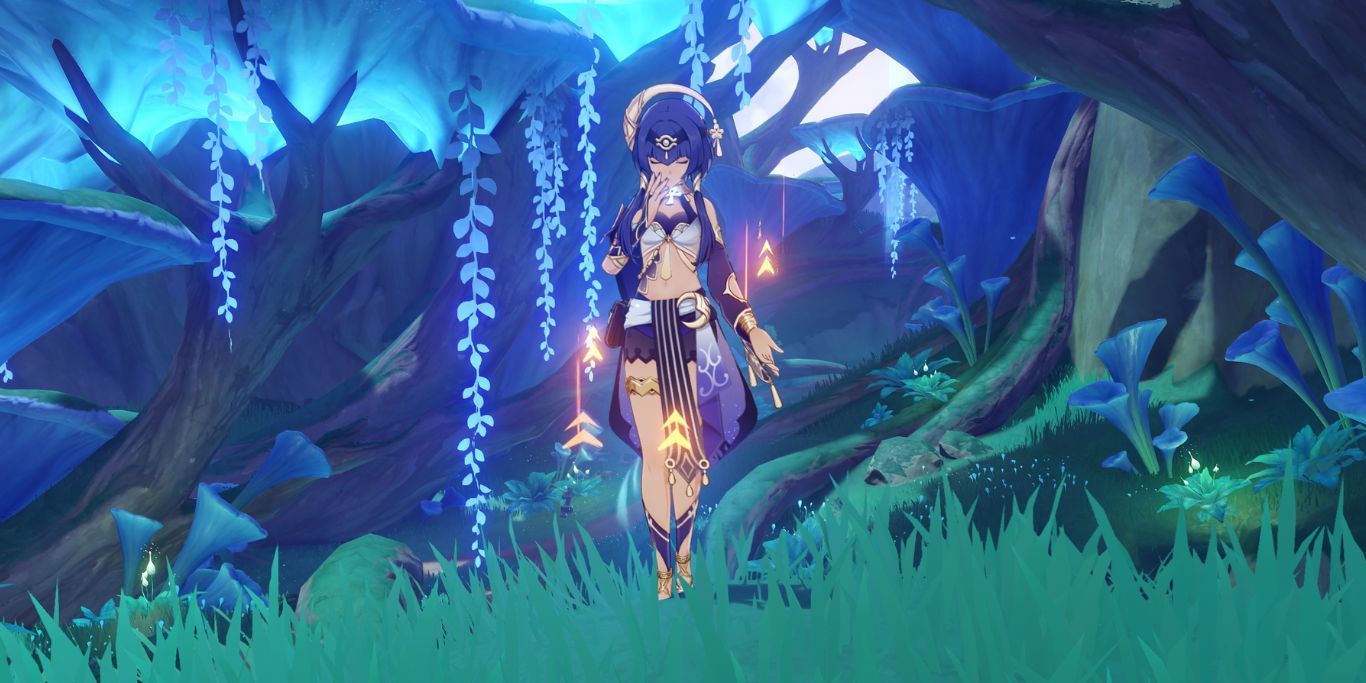 While it might not be the most effective build, sometimes you just like a character enough to make them your main DPS no matter what. Fortunately, the weapon and artifact set choices in the game allow you to do this perfectly.

Much like other characters that scale on HP, Candace has a bit of split scaling if you're trying to build her as the main DPS. While her attacks can be infused by Hydro through her Burst, her normal attack DMG is still based on her ATK.

This means that you'll have to build HP and ATK on her while having enough Energy Recharge and Crit Ratio for a good amount of damage and uptime.

With the release of Hutao, Genshin players were blessed with one of the best weapons, Staff of Homa. Apart from giving you 66.2 percent Crit DMG, the weapon also gives you extra HP, and an ATK buff based on your total HP. Everything about this weapon fits perfectly with this build.

It will help you with your Crit ratio, ATK, and HP, relaxing the strain on your artifact stats. Although, Homa is a five-star weapon and not everyone has it. For the free-to-play and low-spending players, Dragon's Bane can serve as a decent replacement.

Dragon's Bane has Elemental Mastery as the secondary stat, so it would be better to build a reaction-based team with Candace if you're using this weapon.

As for the artifact sets, all three mentioned above can be good allowing you to choose the one with the best sub-stats. 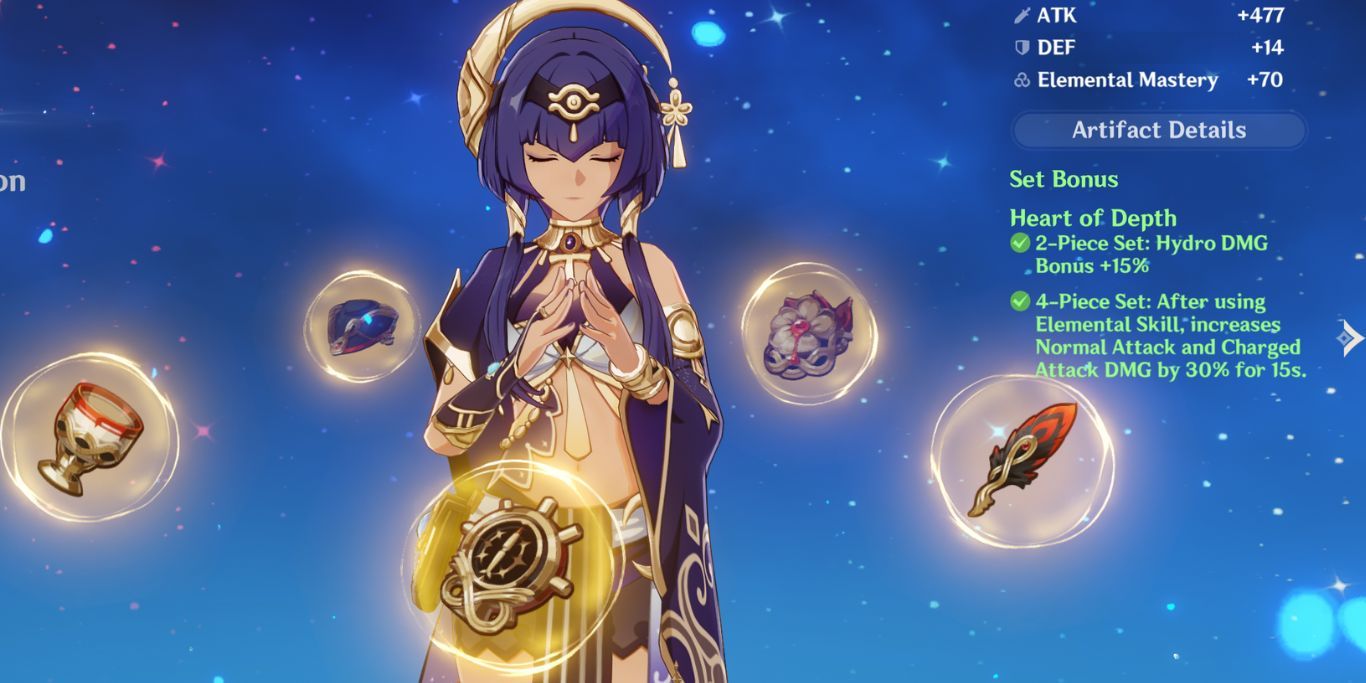 With the flexibility in her builds, there are many artifact sets that you can use on Candace. Thankfully, the stat priority for her doesn't change a lot. 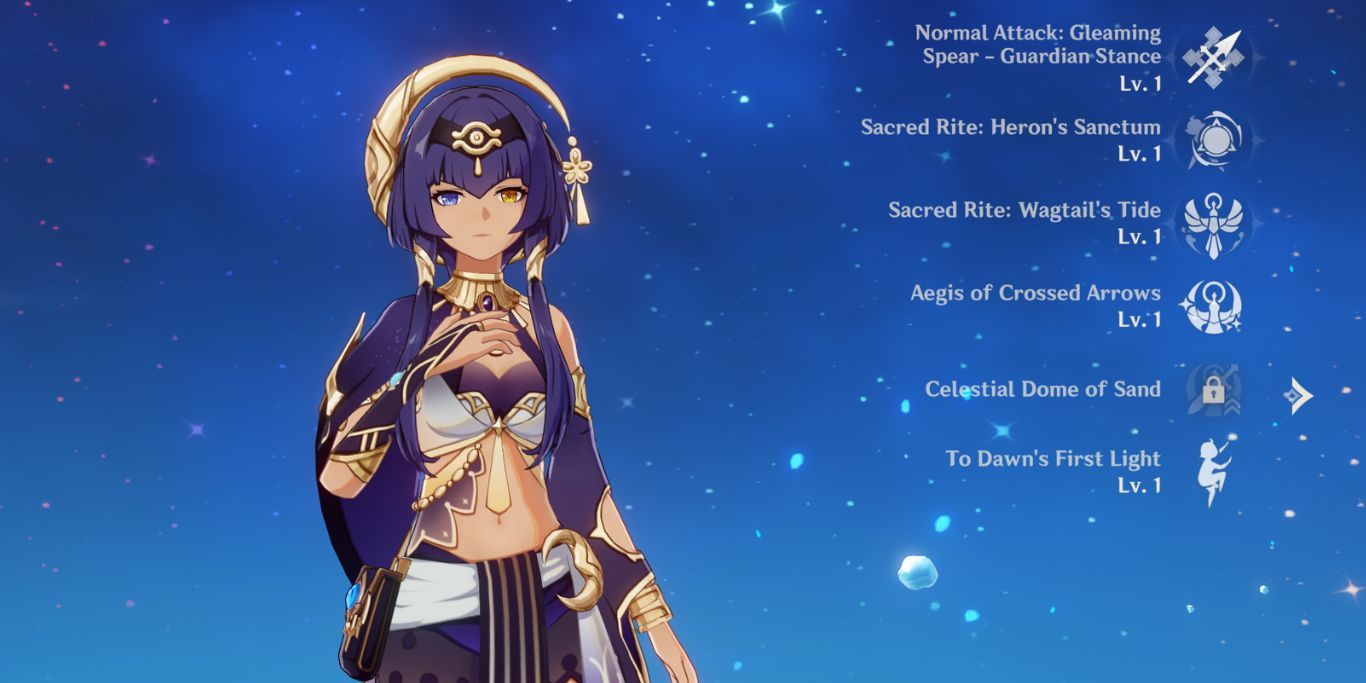 Candace's Elemental Burst is the most useful talent, making it the priority when it comes to talent upgrades. This can be followed up by her Elemental Skill which has two instances, press and hold. This skill can absorb a ton of DMG based on its level.

Her Elemental Skill also has a quick-reaction feature. When you're holding your skill, it instantly gets charged if the shield takes any damage. So, if you time it perfectly before an attack from the enemy, you can use the skill instantly.

Finally, there's no requirement to upgrade her normal attack talent at all. Although, you'd want to do this if you're building Candace as the main damage dealer. 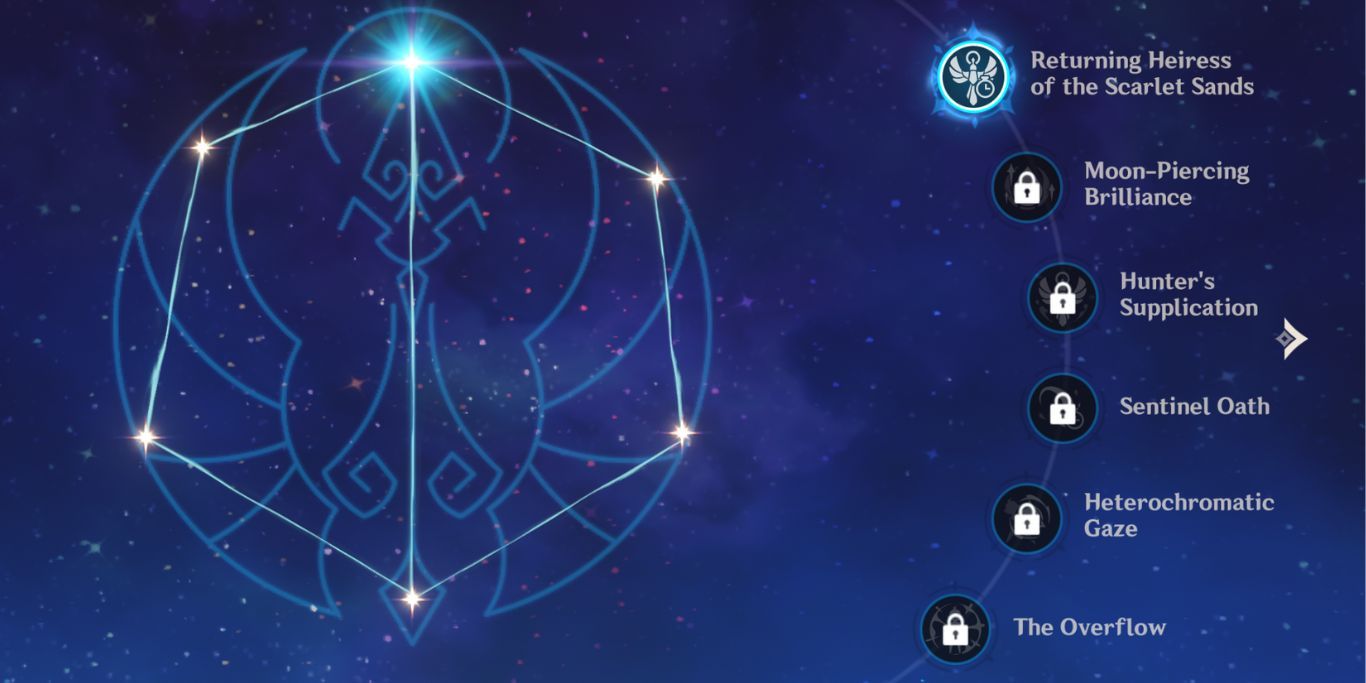 Candace is one of the few characters in the game who can have different play styles based on her constellations. She has a total of six constellations, requiring you to pull her seven times to get them all.