There are a lot of interesting and unique characters from Sumeru in Genshin Impact. With the Version 3.1 update, this count increased as Cyno and Candace were added to the roster. Both of these characters belong to the Desert area of Sumeru, which is on the far left side of the region.

Cyno is a five-star Polearm wielder who possesses an Electro vision. He has a unique skill set that makes him one of the best Electro damage dealers in the game. Everything about this character is cool, including his introduction in the story through the Archon quest line. 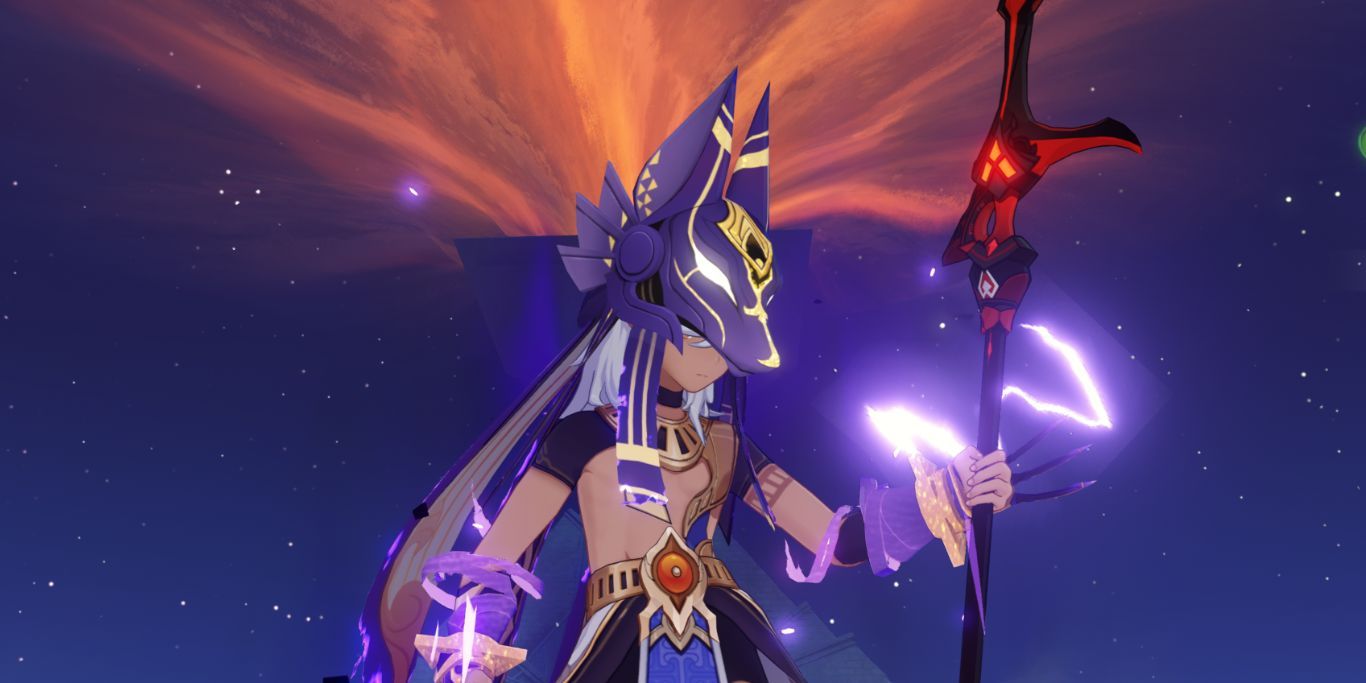 One glance at all the talents Cyno has, and you'll know that Elemental Mastery is one of the best stats for him. His Elemental Burst has a unique mechanic that gives you an extra 100 EM upon use. Further, he has an entire passive talent dependent on this stat.

The Authority Over the Nine Bows talent increases your damage based on your Elemental Mastery during your burst. There is a 150 percent DMG increase throughout the burst, while another 250 percent DMG boost is there for Featherfall Judgement passive.

The staff of the Scarlet Sands, his signature weapon, gives him an additional ATK boost based on his EM by default. Furthermore, whenever you use your elemental skill, this buff increases up to three times. Given the low cooldown of Cyno's skill, this weapon fits perfectly in this build.

Since you're going to have a lot of Elemental Mastery with this build, making a reaction-based team around it is a good option. With the release of Sumeru, Quicken and Aggravate were two of the strongest reactions to be released in the game, and they involve the Dendro and Electro elements.

The four-piece set bonus for Gilded Dreams gives you a ton of EM depending on your team. If you have three characters with any element other than Electro, Cyno will gain an extra 230 Mastery from this artifact set alone.

If you don't have a four-piece for Gilded Dreams, it can be replaced with a two-piece set of each Gilded Dreams and Wanderer's Troupe. With this set, you can gain 160 EM, and you'll be free to use any characters alongside Cyno.

Finally, a four-piece Thundering Fury can also be a good option. This will reduce the cooldown of his Elemental Skill during his Burst by a lot, allowing you to use it over and over. Although, you might not be able to get a lot of advantage from Featherfall Judgement passive with this set. 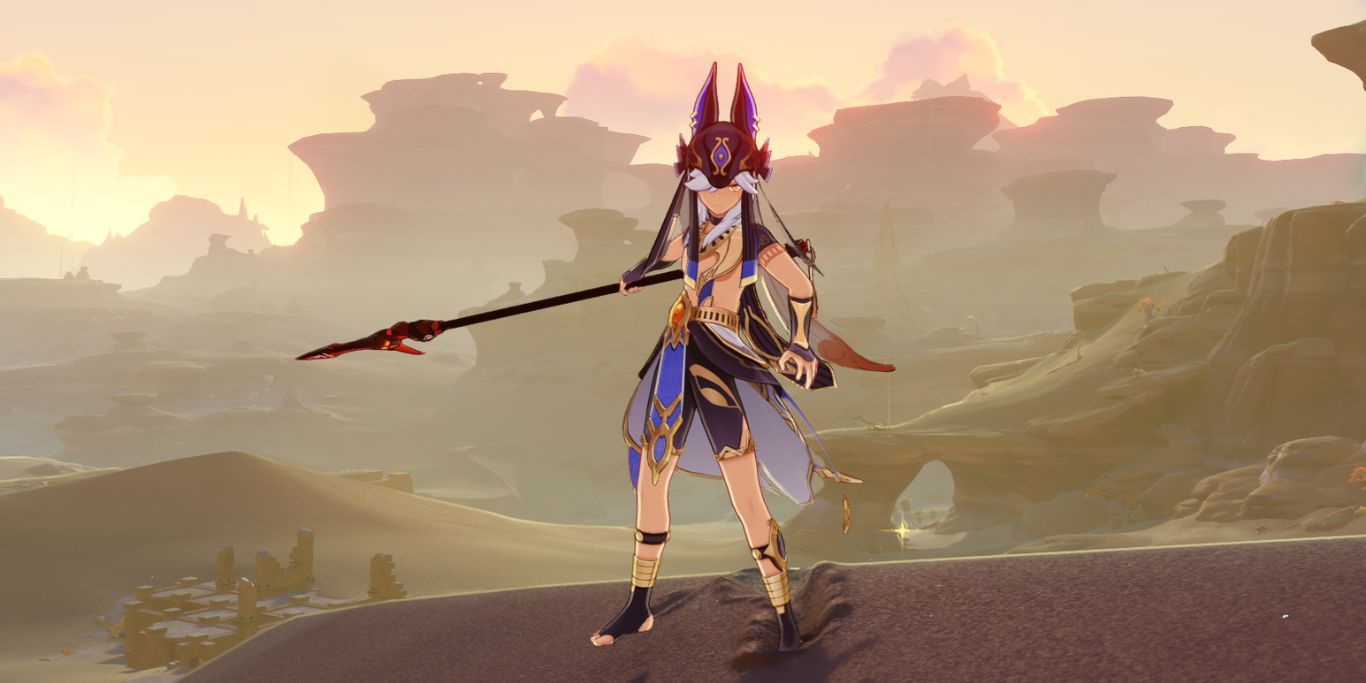 It is time to use the damage potential of this character to make him the main damage dealer of your party. Cyno's entire kit is based around him being a selfish DPS. This is because he doesn't provide any buffs for the party unless you use some special weapons, constellations, or artifact sets on him.

Cyno's ascension stat is Crit DMG, which makes it much easier to have a good Crit ratio on him. But, this also pushes you to get a better ratio than any other character. Primordial Jade Winged-Spear can be perfect to help you with that.

Not only does the weapon give you a 22.1 percent Crit Rate, but it also increases your DMG on an opponent by simply hitting them. This passive can give you a maximum of 22.4 percent ATK bonus and 12 percent DMG bonus at refinement one.

Jade Winged-Spear is a five-star weapon, so it might be hard to get for free-to-play and low-spending players. In that case, Deathmatch (acquired from Battle Pass) and Blackliff Pole (acquired from Paimon Shop) can be great replacements.

As for the artifact set, the four-piece Thundersoother is the best in slot as it gives you a raw 35 percent Electro DMG bonus on enemies affected by Electro. If you've farmed Thundering Fury set for any character before, you most likely already have a Thundersoother set for him as well.

If not, a four-piece Gladiator's Finale can be used as well. It will give you a 35 percent boost on Normal Attack, but an additional 18 percent ATK from the two-set bonus.

This artifact set can only be acquired from different World and Weekly bosses or Strongbox though. 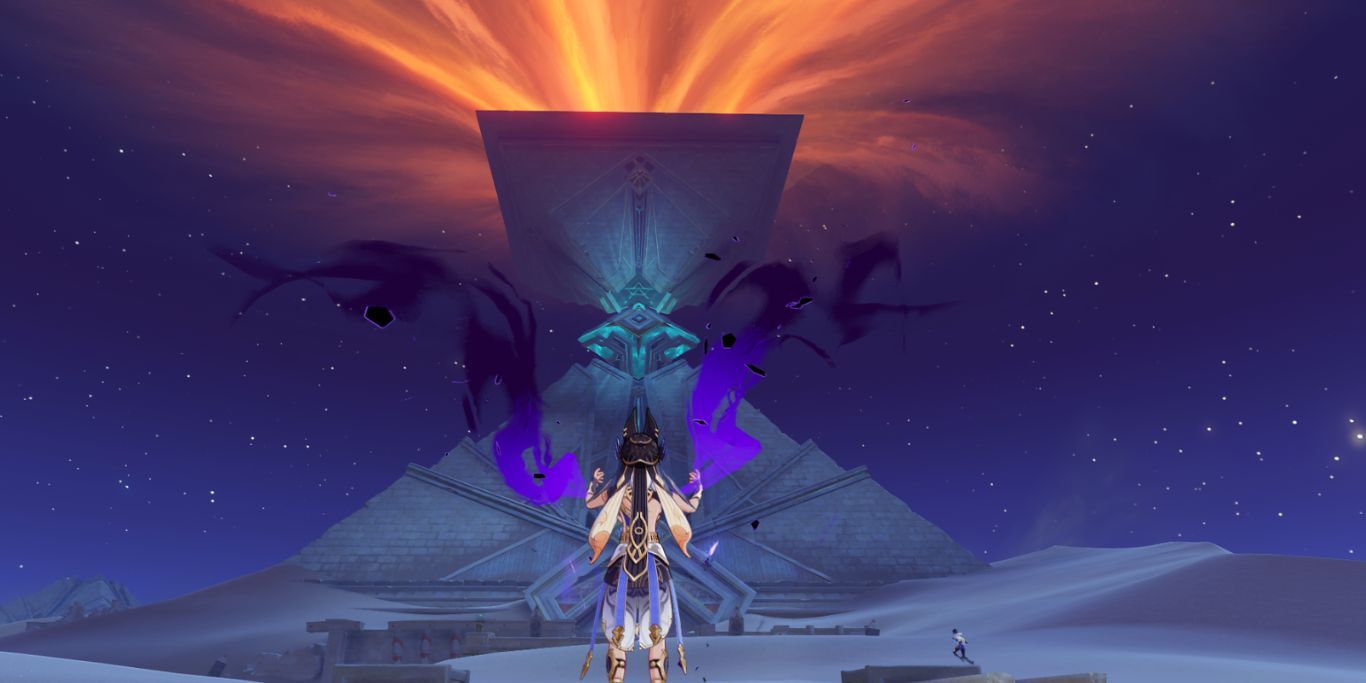 Cyno's burst costs a whopping 80 Energy, and this can be annoying for many people. This build allows you to have your Elemental Burst back before you run out of it. The only reason you'll have to wait to use your Burst again will be the cooldown.

Engulfing Lightning is the signature Polearm for Raiden Shogun, the God of Thunder herself. The weapon gives you an ATK bonus based on Energy Recharge, and in turn increases your Energy Recharge for 12 seconds whenever you use your Elemental Burst.

This build is based around getting tons of Energy for Cyno, so he can have his Burst as fast as possible. Since you'll be focusing on Energy Recharge, there might be a little less Crit ratio and Elemental Mastery with this one.

Unfortunately, there's no good four-piece set for this build. In theory, Emblem of Severed Fate should work well with this build, but only the first hit counts as Elemental Burst DMG for Cyno, making it useless.

So, a two-piece Emblem of Severed Fate and a two-piece set of Gilded Dreams or Wanderer's Troupe work nicely for this. You can also use a reaction-based team with this build. 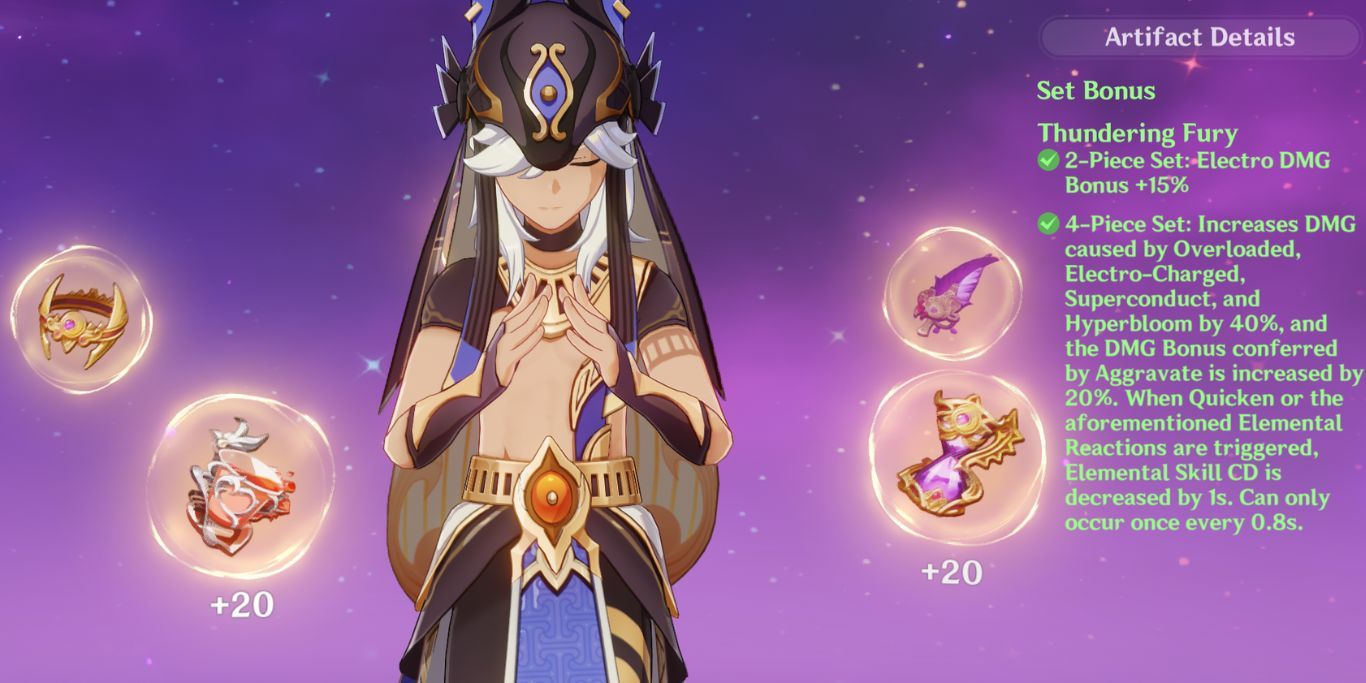 All of Cyno's builds are completely different, allowing you to have a wide spectrum of artifact stat priority. Here's everything you should be looking for in your artifacts based on your build type: 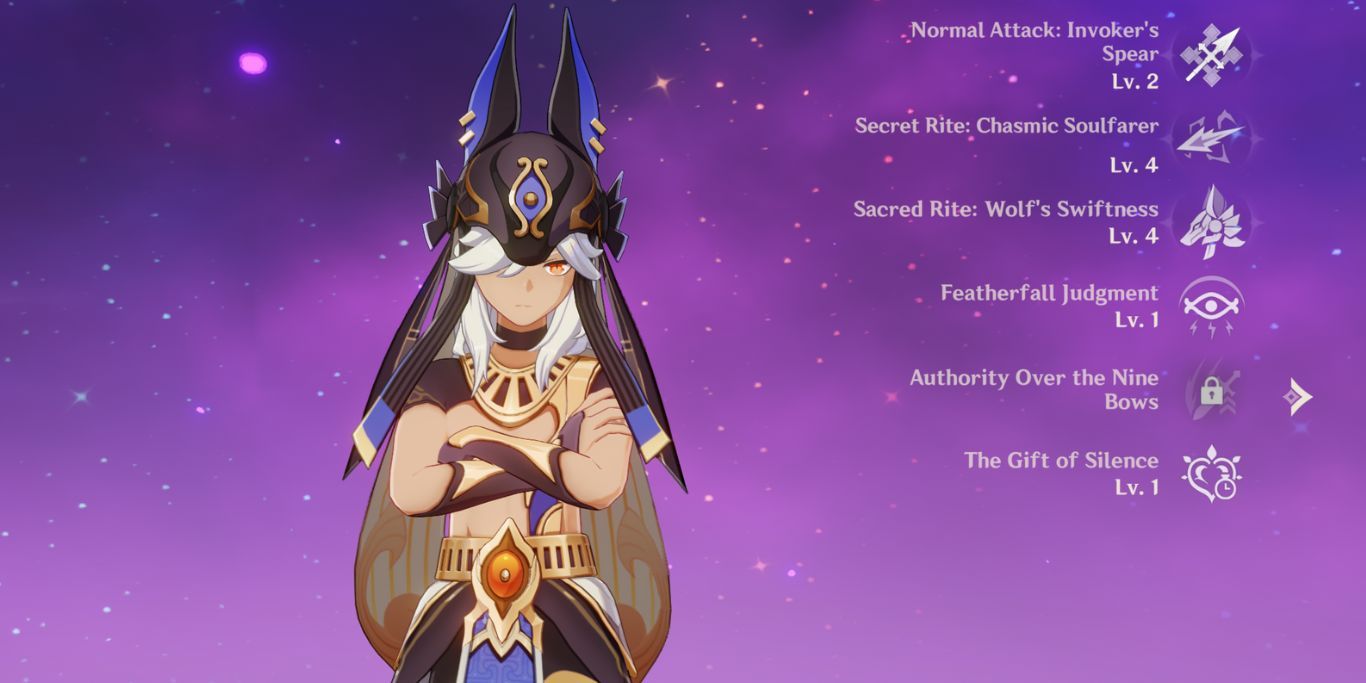 Just like every character, Cyno has a set of six talents divided equally between active and passive talents. His last passive talent allows him to get more rewards from expeditions, while the rest buff his damage in some way or the other.

The first talent to focus on while upgrading Cyno is his Elemental Burst. This will be where your major damage output will come from. This can be followed by his Elemental Skill, which will allow you to deal more damage if you time it right during his Burst. 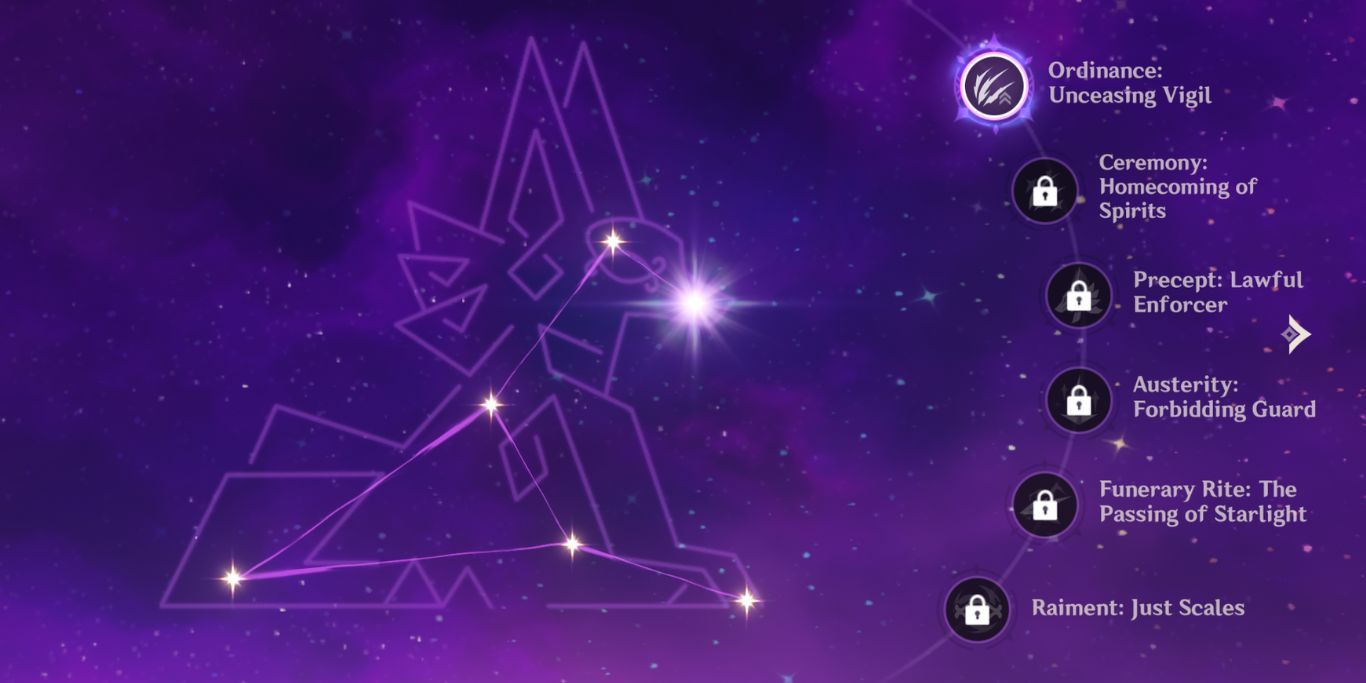 While Cyno's constellations are great for buffing him in numerous ways, he's not one of the constellation-reliant characters. He can still perform well at constellation zero. That said, here's what each constellation will do for him: