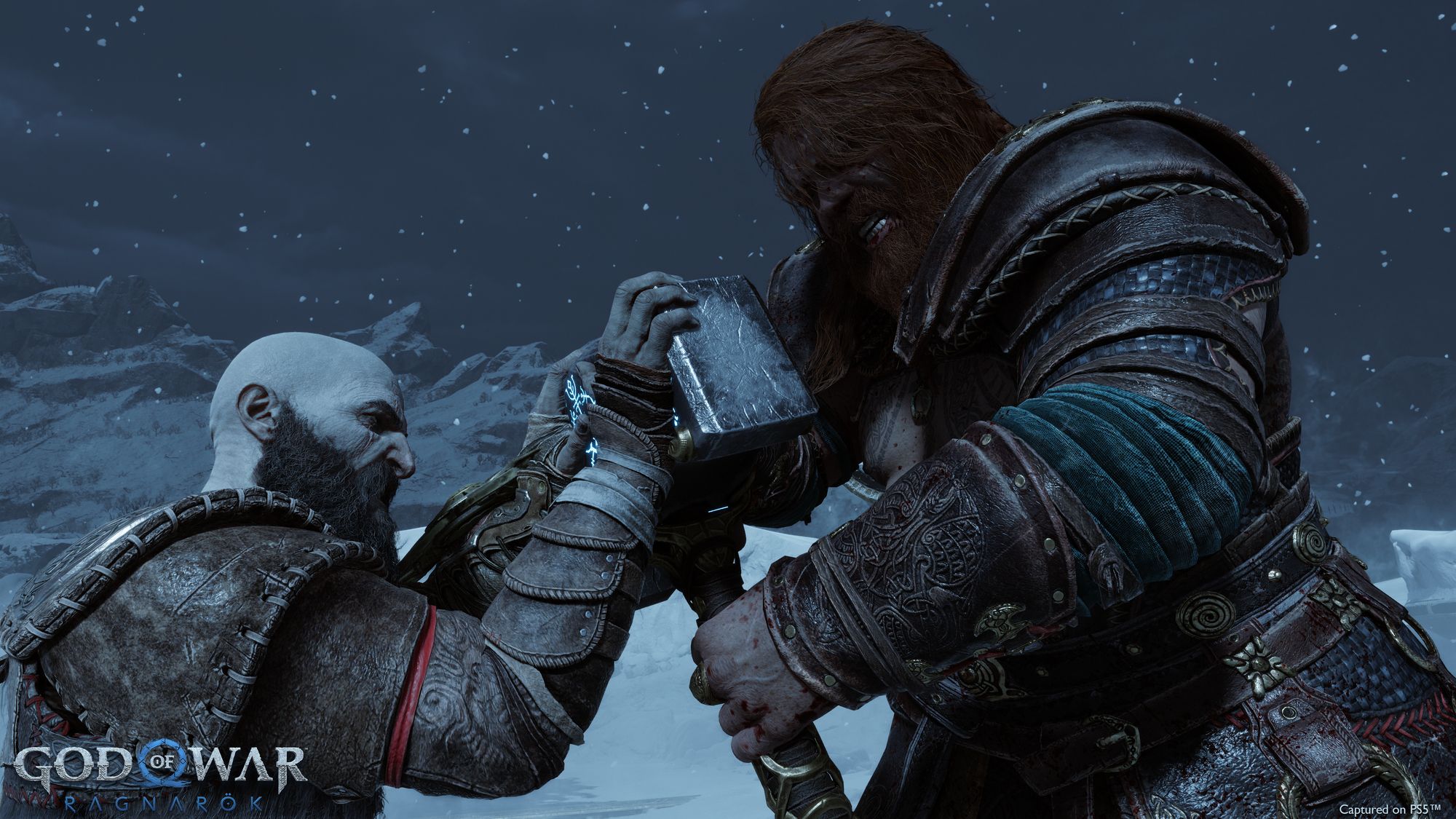 GameCentral plays the first several hours of God Of War Ragnarök and what will be the final part of Kratos’ Nordic adventure.

Many fans have been frustrated about how little Sony has shown of God Of War Ragnarök but we don’t think anyone thought it was because the game had something to hide. The pandemic still casts a long shadow over the games industry and, as Sony studio Insomniac recently made clear, developers just don’t have time to take part in the traditional press cycle, that normally would’ve made it a lot clearer what to expect from Ragnarök.

This is the finale of a two-part story though, so no one should have been expecting any radical change. That came in 2018’s soft reboot, which transformed Kratos from one of gaming’s most unsympathetic protagonists into a war weary father figure, struggling to be a better man… or rather god. This is the first time the franchise has appeared as a native PlayStation 5 game but it’s also being released on PlayStation 4, so that hasn’t enabled quite the leap forward that might have been hoped for.

Ragnarök is a stunning looking game, but it’s clearly been designed within the limitations of the PlayStation 4, so while it looks better than the 2018 game it’s only a minor step forward. It’s churlish in the extreme to describe a game as beautiful as this as disappointing, but it’s also important to manage expectations about how much it’s evolved.

That goes for the structure of the game too, which is still the not-quite-open-world style of the reboot. There are a lot of hub-like locations for you to explore, often in a boat, but it’s more obvious now than in 2018 that most of them are actually very small. That’s compensated by the insane level of environmental detail, which is easily the rival of any other game, but a lot of the spaces you’re exploring do feel rather cramped by 2022 standards.

The way they’re boarded off is also very contrived, as while they’re not technically invisible barriers the logic as to which of the various small fences or cliff drops you can and can’t navigate seems arbitrary. Although there is an increased Metroidvania element where certain routes require particular abilities or weapons to pass, with lots of Dark Souls style short cuts to open up as well.

The opening hours of the game are very similar to the 2018 title, with Kratos and his son Atreus sheltering in their cabin, trying to keep safe from both Fimbulwinter, the prelude to Ragnarök, and the goddess Freya. The latter does not forgive Kratos for killing her son Baldur, even though he totally deserved it, and the first action scene involves trying to escape from her on a sled drawn by wolves.

Although it’s unclear how much time has passed since the last game Atreus has grown up a little and it quickly becomes clear that he’s now much more proactive than his father. Whereas Kratos would prefer to sulk about at home Atreus has secretly been exploring elsewhere, with the intention of contacting Týr, the Nordic god of war. Although Kratos cautions against it, Atreus is all for joining the war that Ragnarök will bring. He’s also begun to rib his dad over his age and to overtly compete with him in terms of his fighting prowess, which may have ominous connotations for the story’s finale.

Just as before, the dialogue and voice acting is very good but there is a noticeably different tone to it. There’s a lot more swearing than before and some characters speak in an entirely modern vernacular, even as Kratos remains his usual terse, old school self. For no apparent reason Thor sounds exactly like Josh Brolin, aka Thanos, and Odin almost comes across as a knock-off Steve Buscemi. If there’s any reason for these anachronisms it’s not clear yet, but by accident or design the game feels considerably less Nordic than the last one.

The plot is intriguing though, precisely because Ragnarök and its principle players are now such a well known part of popular culture, thanks to Marvel movies and countless other games that have leaned on the myths for inspiration. And yet despite the story seeming to have a clear end point, how that is going to affect the characters of Kratos and Arteus is impossible to guess at. Even Thor and Odin’s plans are unclear, as their roles are very far from just being moustache-twirling bad guys.

In terms of production values, Ragnarök is impossible to criticise and since this is a continuation of the previous game, and not a sequel looking to reinvent the wheel, the main questions it has to face are in terms of its combat. The sense of weight and physicality is just as impressive as before but if the original had a fault it’s that the combat did become repetitive before the end, especially given the lack of enemy variety.

We can’t judge the latter, since we’re only allowed to talk about the opening hours of the game, but having played a good seven hours or so there are plenty of new enemies, including lizard men, mini-boss mud monsters that are also a hive for tiny fire lizards, and a centaur. You do still end up seeing them all quite frequently though, so whether there’ll be enough to avoid overfamiliarity, when added to the existing core of human-ish fighters, remains to be seen.

The basics of combat with Kratos’ axe is the same as before but this time he takes the Blades of Chaos with him from the start. These are used as grapples for various hooks and to clamber up tall structures, but they can also be imbued with fire by swinging them round vertically. The axe can now perform ice attacks and so you’re encouraged to use each one according to the needs of the moment, in terms of what enemies are more vulnerable to heat or cold, and the fact that the blades are a good area of effect weapon and the axe better for ranged combat.

You still have Atreus and his bow to help as well, with both characters having their own skill trees to unlock new abilities, as well as customisable armour and weapons. We haven’t got far enough yet, to see exactly how many options there are in terms of your inventory, especially when it comes to runic buffs, but the last game had so many choices it all began to seem like an unnecessary complication.

Not unlike Horizon Forbidden West, it appeared to be specifically designed that way to give the illusion of depth, where there really wasn’t any, but at the moment it’s impossible to tell whether that’s still the case – although the impression we get is that developer Santa Monica Studio has acknowledged the criticism.

The puzzle elements of the game are also very familiar, although Kratos’ increased repartee of moves allows for more variety and invention, with lots of clever platforming and things like using the axe to freeze geysers or the blades to set fire to vegetation. There are also numerous optional side quests in the game, and these are all very substantial, with the first main one being to decommission three dwarven mining rigs.

One involves mostly just combat, while another is almost entirely puzzle based, while all three have multiple levels of additional secrets, in terms of hidden loot crates and collectibles. The three rigs are quite widely spaced apart, which further encourages exploration, although it’s disappointing that still none of the realms we’ve seen seem to have any significant population. Like the original, the game world always feels a very empty one, even when you’re walking around the capital city of the dwarves.

Ragnarök is, just like its predecessor, a highly entertaining game but as engaging as the combat and puzzles are it’s the storytelling that elevates it. One scene, the details of which we cannot mention, is incredibly tense even though it’s just a bunch of people sitting around a table, pretending to be polite to each other.

It leads into a boss battle which is suitably bombastic but it’s the encounter beforehand that sticks in your mind the most, that and the resolution to the fight where you’re left uncertain as to where you or your enemies stand. God Of War Ragnarök isn’t going to be the revelation that the first game was but it does seem to be at least as compelling, in terms of both story and action.