There isn’t much I can say about God of War Ragnarok that couldn’t also be said about God of War 2018. That isn’t a bad thing necessarily – the previous God of War is a phenomenal game in many regards, and it’s hard to fault Santa Monica Studio for taking an ‘if it ain’t broke, don’t fix it’ approach to the sequel. Still, if you were hoping for some groundbreaking new gameplay or huge next-gen upgrades, it’s probably best to adjust your expectations. God of War Ragnarok is first and foremost the second half of a two-part story and a largely narrative-driven experience. Things could change later on, but so far I’m surprised at how little has changed between games.

In fact, I may not have even noticed any difference in Ragnarok at all if I hadn’t recently replayed the last God of War. Combat still amounts to a flurry of axe swings while you juggle draugr in the air and try not to get too surrounded. One subtle difference here is a new emphasis on the interplay between your two weapons: the Leviathan Axe and the Blades of Chaos. Since you start with both, there are more interesting ways to chain attacks together and build momentum. Frozen enemies take more damage from the blades, while burning enemies take more from the axe, so there’s a clear incentivize to build status effects and a reward for swapping at the right time. The blades also have some new abilities. Not only can you grab enemies and pull them in closer, but you can latch onto targets and pump them full of explosive energy. Like the last game, the skill tree provides new attacks and abilities for each weapon that add utility and variety to your kit.

Gear progression also makes a return. Kratos can equip and upgrade weapon handles, armor pieces, shields, runes, and relics. I have not seen enchantments yet, so if they’re missing that may be the only difference here. There is a larger variety of crafting materials now, and when you defeat large monsters they often explode like pinatas, dropping four or five different resources for you to gather. There is so much more collecting now that Brok and Sindri actually have a chest where anything you neglected to pick up after battle is automatically stored. It’s a nice quality of life update, but it hasn’t stopped me from obsessively combing every area for hidden collectibles.

The way you explore the world remains unchanged. Story missions will take you through linear paths with the occasional puzzle blocking your way, while the more open-zone sections allow you to freely explore in your canoe, bouncing from beach to beach as you take on side quests and hunt for hidden treasure. Most of the puzzles and collectibles are the same. You still have to throw your axe at three runes to open locked chests, and you still have to hunt down all of Odin’s Ravens. There are some new puzzle types, like a little loot gremlin that hides in the ground unless you strike it from behind. For the most part though, it’s just more God of War. 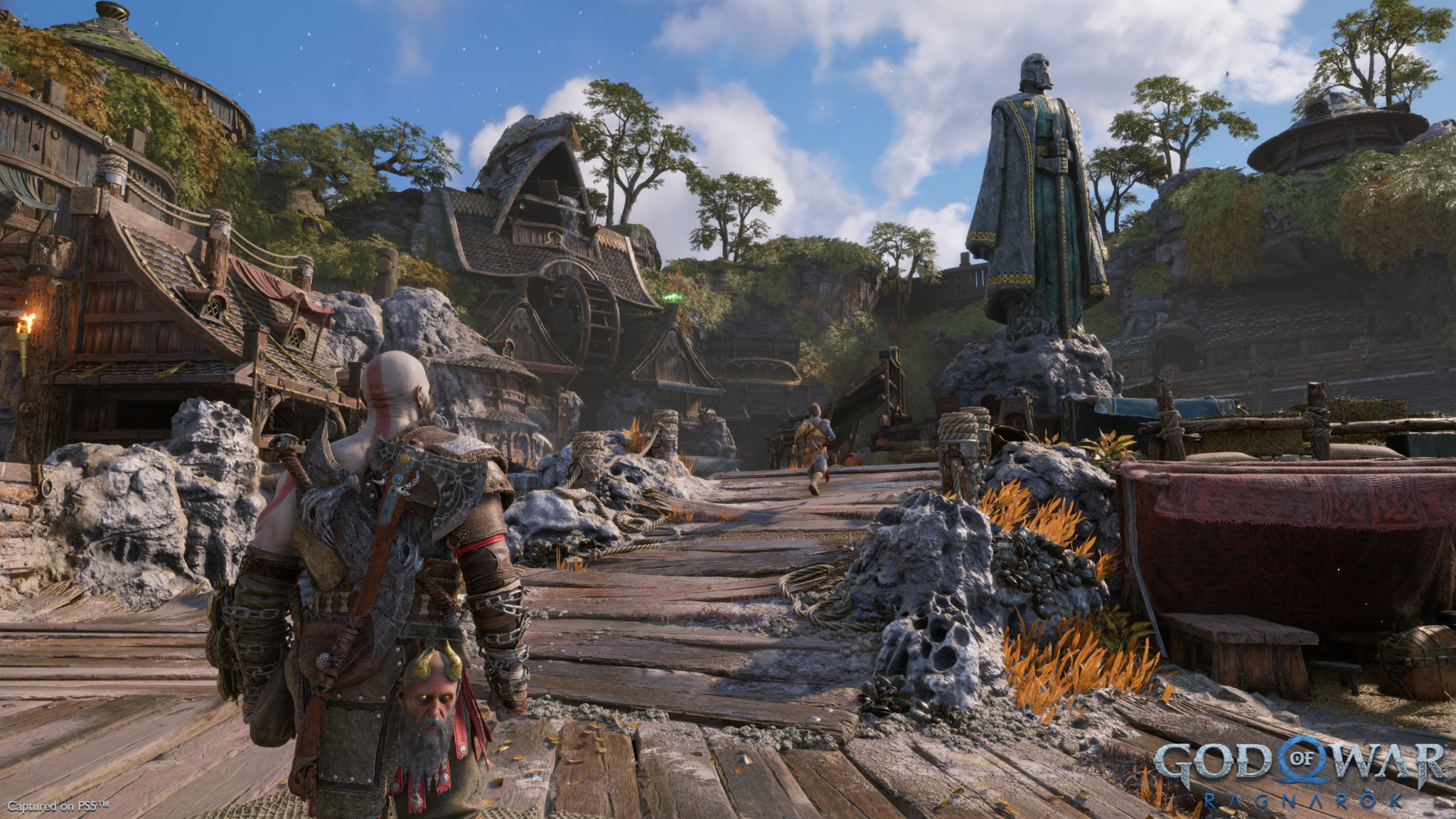 It’s hard to ignore how much things have stayed the same when the world has changed so much. The death of Baldur has brought Fimbulwinter to the Nine Realms just as prophesied, and by the time we rejoin Kratos and Atreus, Midgard has already frozen over. Atreus is now several years older, and post-puberty he’s a lot more confident and independent. Kratos is singularly focused on preparing his son for the dangers that lie ahead, while simultaneously in denial about the role Atreus is meant to play. When Atreus reveals that he’s been secretly tracking down hidden messages left behind by the Giants, Kratos starts to understand that, for the first time in his life, he’s out of depth.

Rangarok begins with an fascinating new status quo for the pair, as Atreus pursues his destiny and Kratos must allow himself to follow his son’s lead. God of War 2018’s greatest strength was the way it demythologized Kratos and brought humanity to the character. What makes Ragnarok fascinating is watching the way he reacts to being part of a story that is no longer his own. Learning humility may end up being Kratos’s greatest challenge, but who better to teach him than his own son? 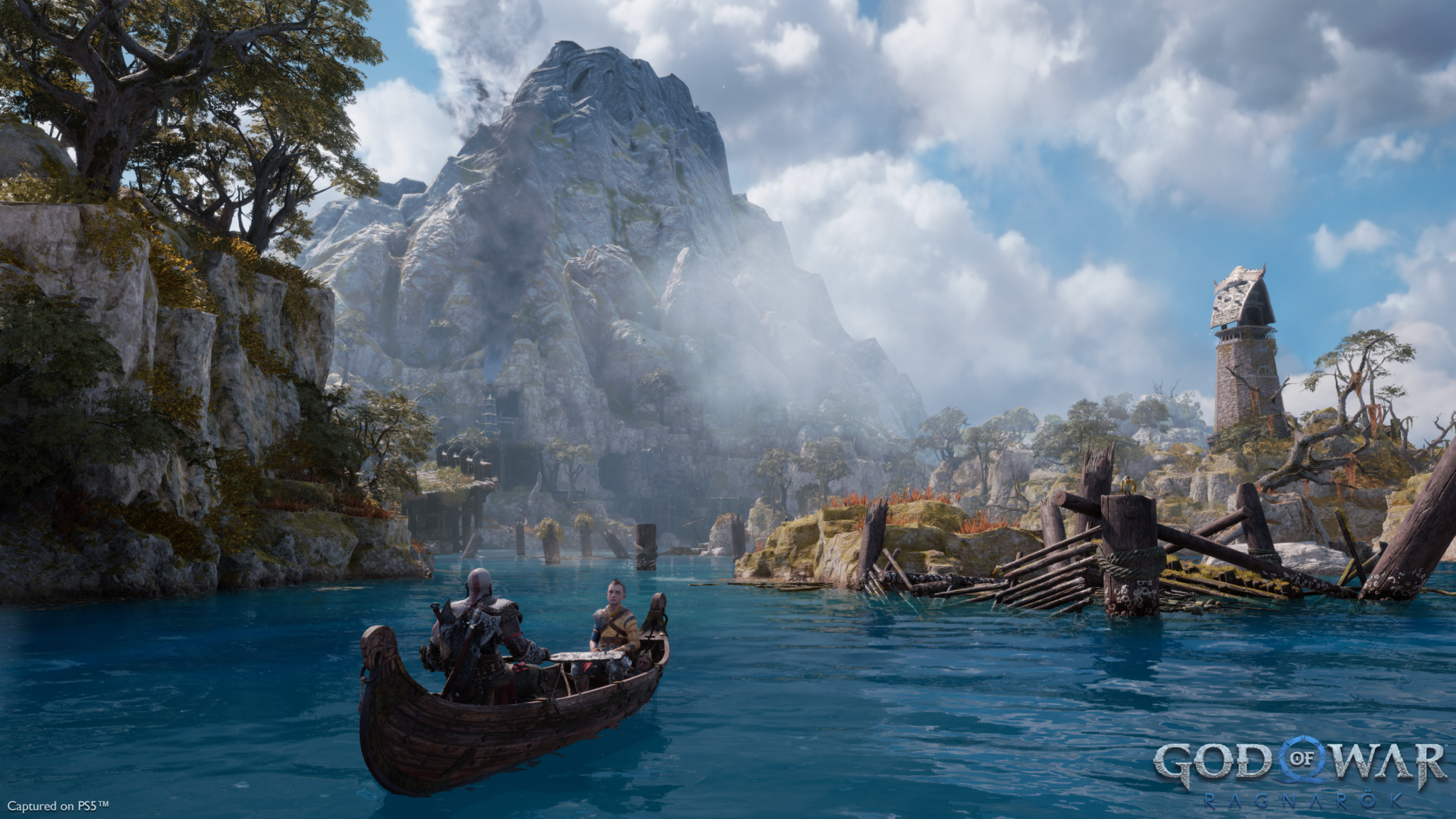 I’m just over six hours into it, and so far I’ve only seen one realm outside of Midgard: Svartalfheim, the realm of the dwarves. It’s a beautiful setting that’s unlike any of the realms we’ve explored before, and it’s rich with lore that’s easy to pick up on as you explore and complete narrative-led sidequests – ones I can’t talk about per Sony’s embargo, though I really, really want to. Even if you’re a critical path kind of player, you won’t want to miss out on some of the optional quests in this early section, particularly if you’re fond of a certain one-eyed talking head.

While I’m not allowed to get into story specifics at this time, I can say enemy variety is much improved. The number of troll bosses you faced in the last game was probably the most common complaint, and Santa Monica Studio clearly took that criticism to heart. The monsters in Midgard are completely different from the monsters in Svartalfheim, and different enemies demand different approaches to combat. The Realm of Dwarves is filled with frog-like creatures who like to swarm you and cling to walls while they spit acid from a distance. Both of your weapons are effective at range, but there are more opportunities to use the environment too. Besides exploding barrels, you can also throw boulders, break off tree trunks to swing around, and if the situation is just right, even call on Atreus to use his magic arrows to blow up structures. While I have taken on a few repeated mini-bosses already (using similar tactics each time) I’ve also seen as many different kinds of monsters in the first six hours as I did throughout the entirety of God of War 2018. 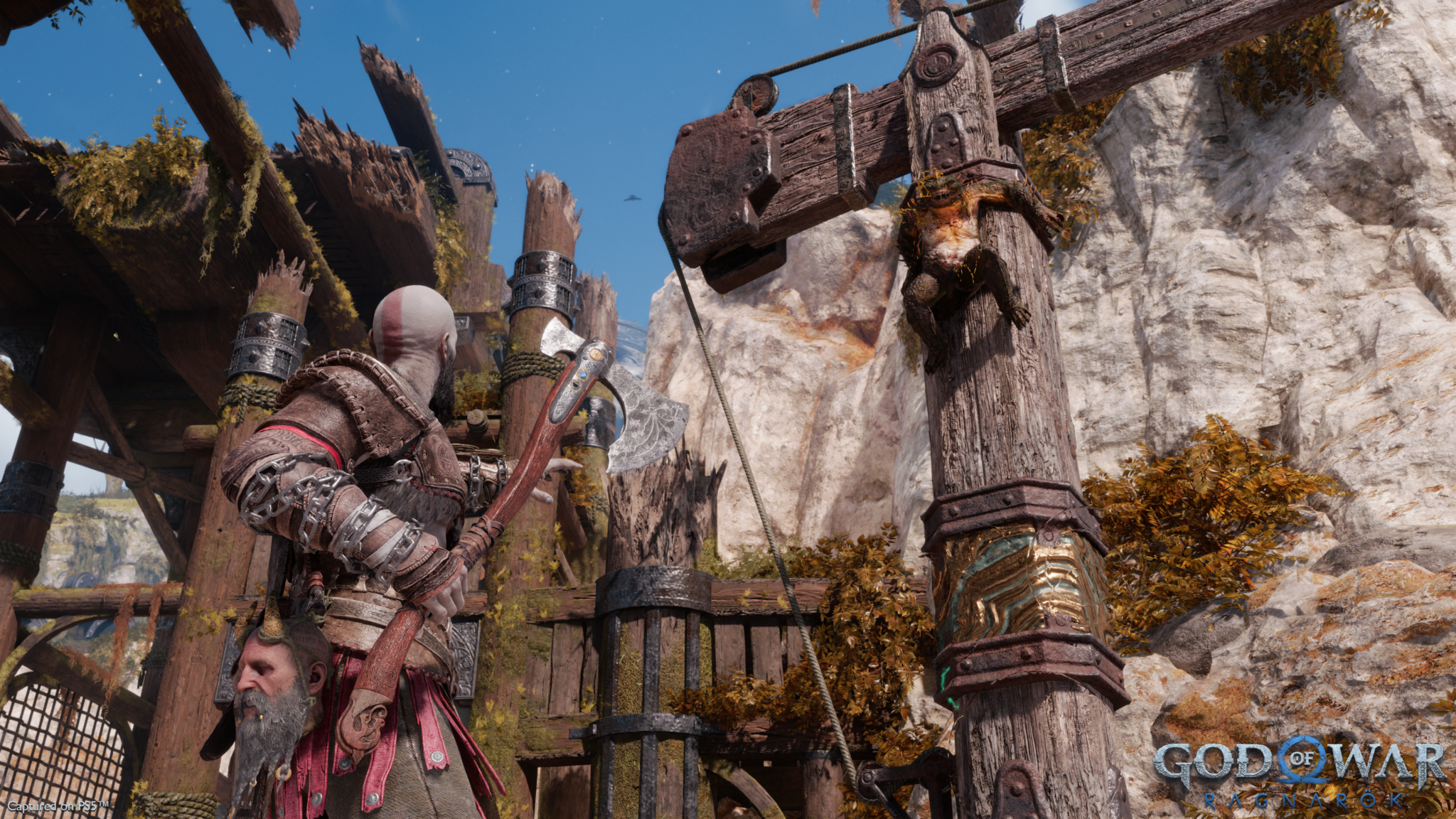 I’ve barely scratched the surface of the Ragnarok’s story in those first six hours. As Atreus continues to gather information about the Ragnarok prophecy and prepare for the battles to come, Kratos remains apprehensive and fearful. He doesn’t understand who his son is becoming, and more pressingly, he doesn’t know if his actions are helping him or putting him in more danger. The more he resists every step forward, the more tension it creates between them. Like its predecessor, Ragnarok is filled with scenes that manage to say so much, while our stoic protagonist says barely anything at all. It’s tempting to complain that the sequel isn’t more of an evolution, but just managing to live up to God of War 2018 might end up being enough.