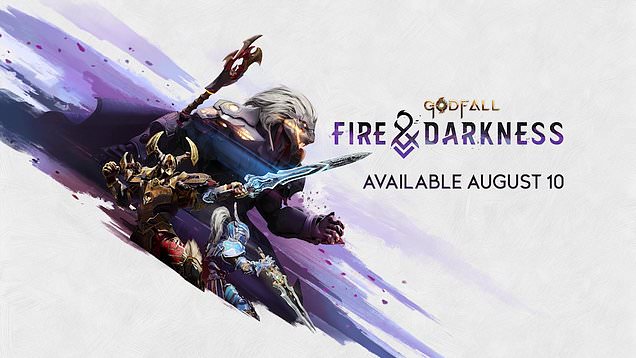 One of the few takeaways from Gearbox’s E3 presentation is confirmation that Godfall is moving back a generation to the PS4.

There was surprisingly little shown during Gearbox’s E3 2021 presentation. Aside from a reminder that the live action Borderlands movie is still going to be a thing, perhaps the most eye-grabbing announcement was that the PlayStation 5 will be losing one of its exclusives in the summer.

Last year’s looter slasher Godfall, which was also ironically enough the very first PlayStation 5 exclusive ever shown, is jumping back a generation and coming to PlayStation 4 on August 10.

It’s peculiar to see a game effectively receive a downgrade, but it at least means anyone who has struggled to get hold of a PlayStation 5 will be able to play it for themselves. Not that they’ve been missing out on much.

Fortunately for current Godfall players, that wasn’t the only announcement. The PlayStation 4 release will also coincide with a new paid expansion called Fire & Darkness, as well as a free Lightbringer update, which will add a bevy of new content to the game. Both expansions will be available for the PlayStation 4 version too.

On top of that, after much fan demand, there will be a matchmaking beta, meaning friends will finally be able to play the game together.

As for the remainder of Gearbox’s presentation, the publisher announced Homeworld 3, the newest entry in the sci-fi strategy series, and shared some footage of the upcoming co-op survival game Tribes Of Midgard, which is releasing on July 27.

And lastly, there was Borderlands spin-off, Tiny Tina’s Wonderlands, which probably would’ve been the biggest announcement of the bunch if Gearbox hadn’t already shown the reveal trailer during Summer Game Fest.

As it was though essentially no new information was released, but then the game’s not due out until next year.

Godfall is available on PlayStation 5 and PC. It releases for PlayStation 4 on August 10.