Shortly after completing the “The Prince’s Secret” main quest in GreedFall, you will be thrown into the next quest called “Treason!”. This quest can have some dire consequences depending on whether you’ve invested any time into Kurt’s personal sidequests or not, and it also has a few achievement/trophies that can be unlocked depending on the choices you make.

If you want to know how to get each of the outcomes of the “Treason!” quest and their related accolades, including what requirements you need to meet in order to do so, we have a full guide right here. Spoilers ahead.

All Treason! Achievements/Trophies and How To Unlock Them 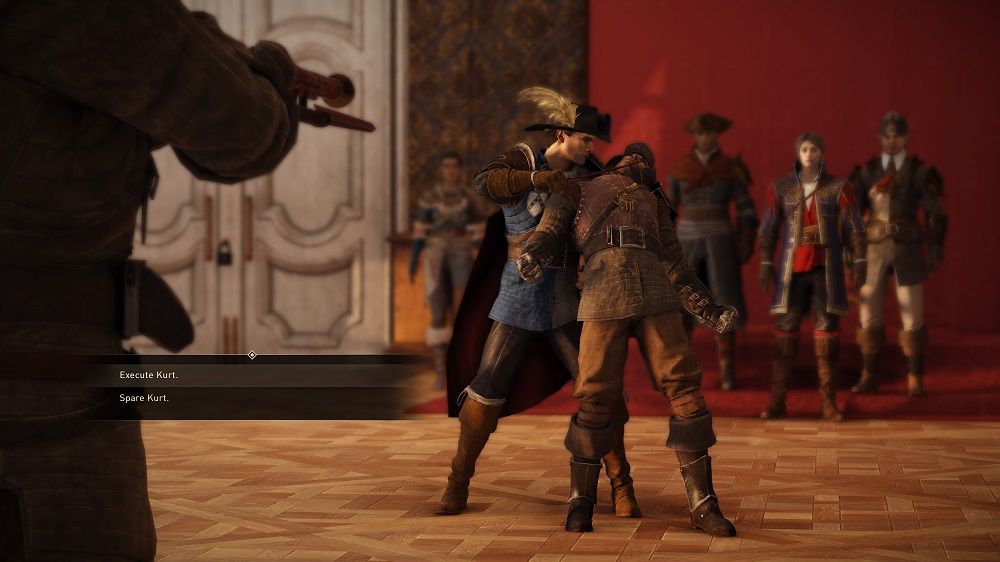 This is the best result from the “Treason!” quest, so it of course requires the most amount of work to achieve. In order to get this, you must have completed both of Kurt’s personal quests up until this point — “Missing in Action” and “Amongst the Ghosts”. This will mean that you have secured his loyalty. If you want to ensure that you get this result, make sure you complete Kurt’s quests before completing “The Prince’s Secret”.

With his personal quests completed, Kurt will not take part in the coup during “Treason!” and will help you in defeating the rebellious Coin Guard and their leader Torsten. This allows you to warn both the Alliance and the Theleme, improving your relationship with each faction.

This result will unlock the “Missed Coup” achievement/trophy. This outcome is necessary in order to get the best ending in the game.

If you have not completed Kurt’s personal quests, he will attack you alongside the Coin Guard during the coup. Though there will come a point where you can seemingly choose to spare him or kill him, Kurt will die either way. The “Betrayal in Blood” achievement/trophy does not unlock immediately after he dies, but will unlock at the end of “Treason!”.

In the Name of the Enlightened

This accolade is one of two that you can unlock following on from the “Betrayal of Blood” outcome. After having to defeat Kurt and deal with the Coin Guard’s coup, Torsten manages to getaway. You can only choose to save one faction, Theleme or the Alliance.

“In the Name of the Enlightened” unlocks when you choose to warn San Matheus (Theleme). The faction you do not save will be attacked by the Coin Guard and the ousted leader will evacuate to New Serene, appearing in the embassy near the palace. You will no longer be able to complete any sidequests you had for the faction attacked by the Coin Guard.

The “A Preserved Alliance” achievement/trophy unlocks if you choose to warn Hikmet (the Alliance) instead of Theleme. Remember, whichever faction you do not save will be overrun by the Coin Guard and you will not be able to complete their related quests.

Note: Saving before completing “The Prince’s Secret” with Kurt’s personal quests incomplete will allow you the opportunity to get all achievements/trophies without multiple playthroughs. You can simply reload to this point and either complete Kurt’s quests before continuing with the main quest, or choose to warn a different ally during “Treason!”.