Guilty Gear Strive has many systems at play and is a rather complex fighting game overall. It can be a bit intimidating to jump into a game like this, especially when looking at the more complicated and hard-to-master characters the game offers.

Fortunately for newcomers, Guilty Gear Strive has a handful of extraordinarily fun fighters that are easy to wrap your head around, giving you the chance to better learn the core fundamentals and mechanics of the game. Each character in the game is ultimately worth checking out. Still, some are especially suitable for beginners, as they offer simple attack combinations and button inputs for their Special Attacks and Overdrives. 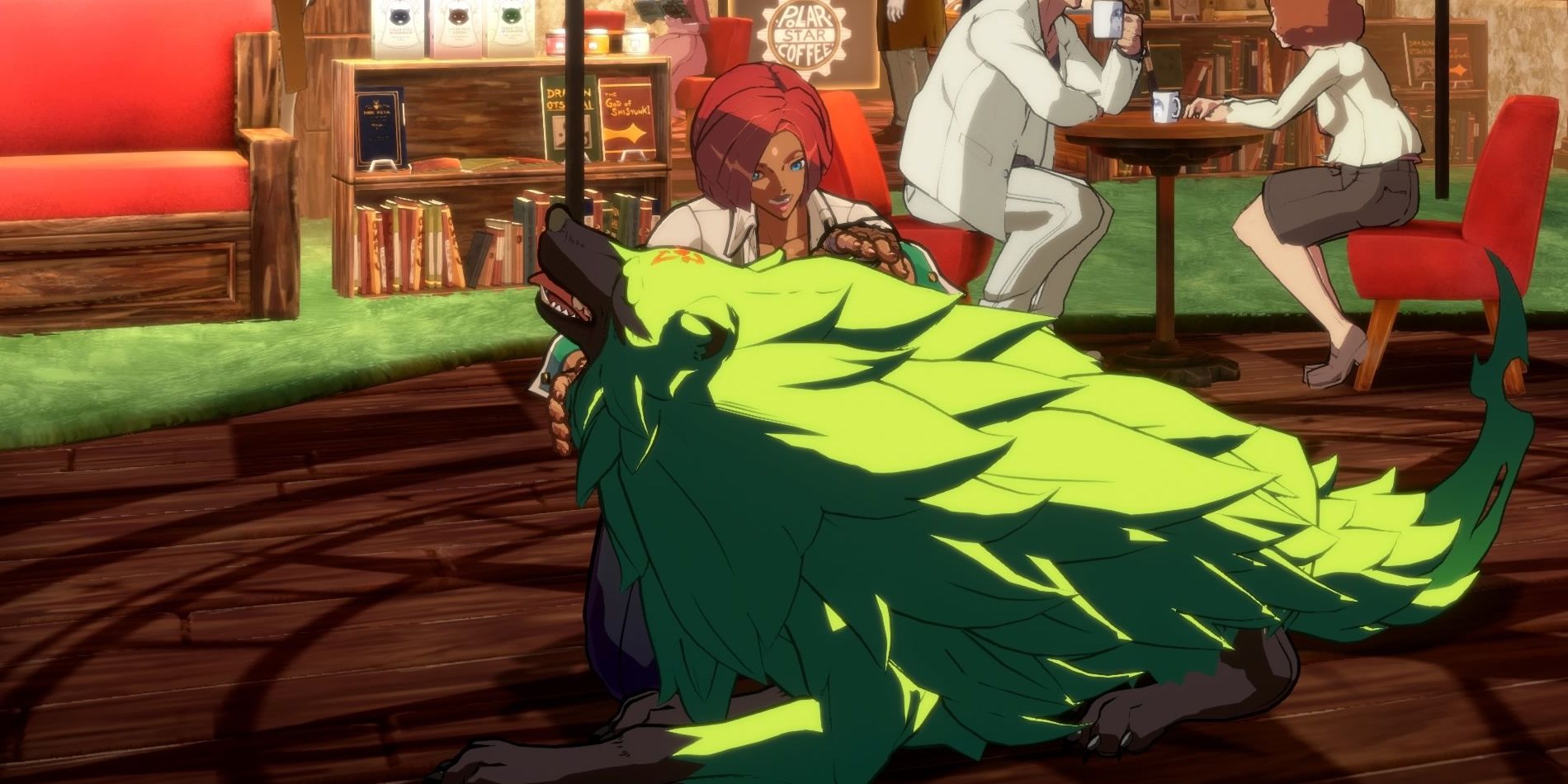 Giovanna makes her debut in the Guilty Gear universe in Strive and is one of the best choices for anyone learning the ropes. Giovanna is a quick, close-combat fighter that delivers lightning-fast attacks that can overwhelm and devastate her opponents.

Giovanna is also accompanied by her trusty companion Rei, a wolf spirit that can possess her, granting Giovanna even more speed. Most of Giovanna’s moves will propel her forward toward the enemy, which allows her to close in on them and keep the pressure entirely on the opposition. As her Tension Meter fills, Giovanna will deal more damage, making her playstyle aggressive.

The one downside to Giovanna that can be troublesome to newcomers is her lack of ranged attacks. Giovanna is a close-combat fighter with no mid- or long-range attacks. You will need to be aggressive, play competent defense, and utilize your unique abilities to close the gap between her and the opponent. 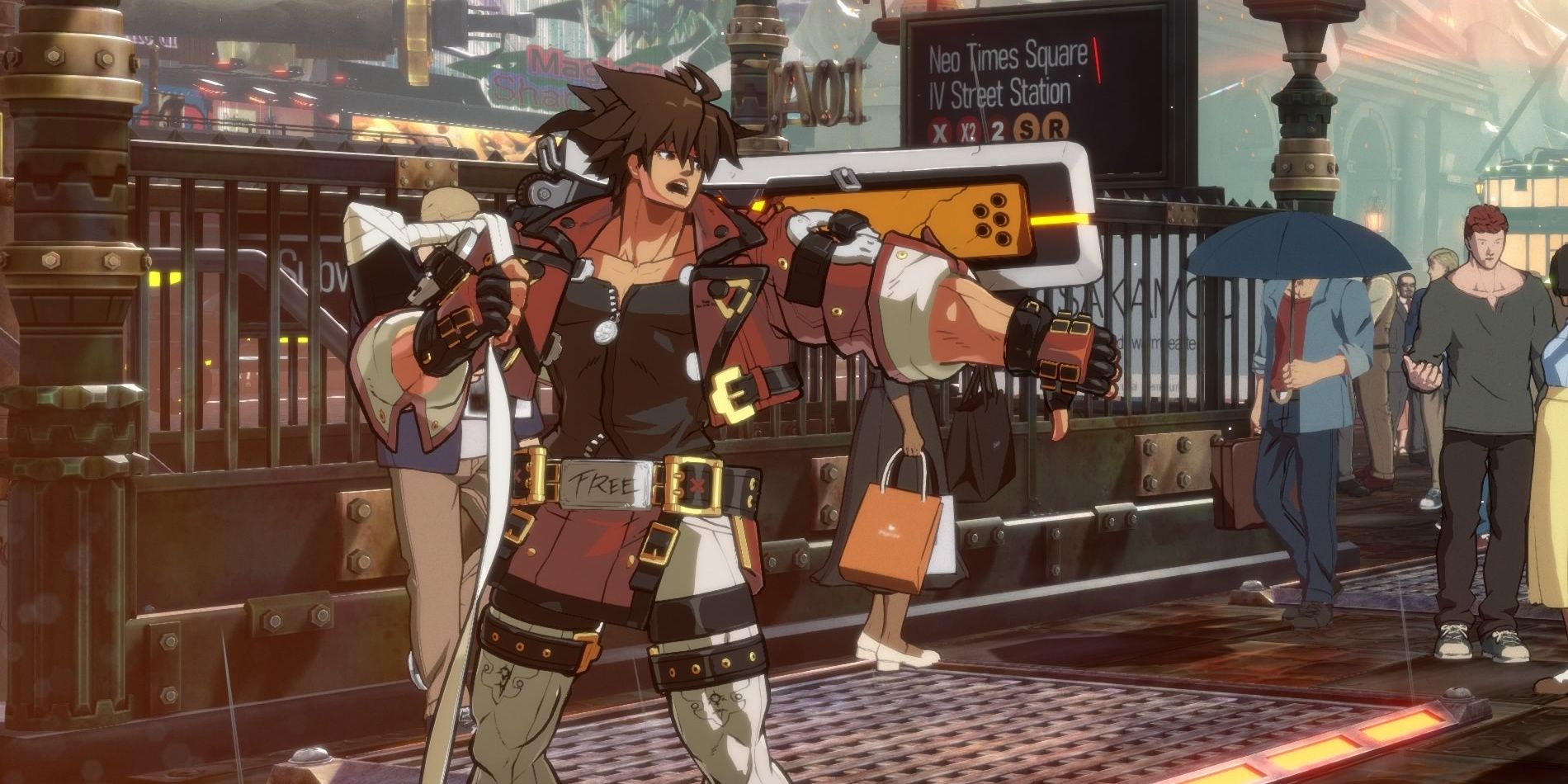 The main protagonist of the Guilty Gear franchise returns in Strive and offers newcomers a chance to learn the game’s core fundamentals and mechanics. Sol Badguy is the default character for the Guilty Gear Strive Dojo mode and will help train you in many different aspects.

Sol Badguy is a balanced fighter that possesses a wide range of different abilities that will give you a chance to experiment with the game’s many systems at play. Ultimately, Sol’s moveset allows him to play aggressively at close and medium range and rewards you for utilizing everything at his disposal.

Sol Badguy’s main draw is his Fireseal, which is a sword that allows him to concentrate and amplify his Fire Magic and use it against the opponent. With the Fireseal, Sol is able to send a fire projectile across the ground, which will enable him to close the gap and apply much-needed pressure on the opponent. Sol’s mid-range attacks, paired with his quick and hard-hitting close-range attacks, make him an excellent choice for any beginner. 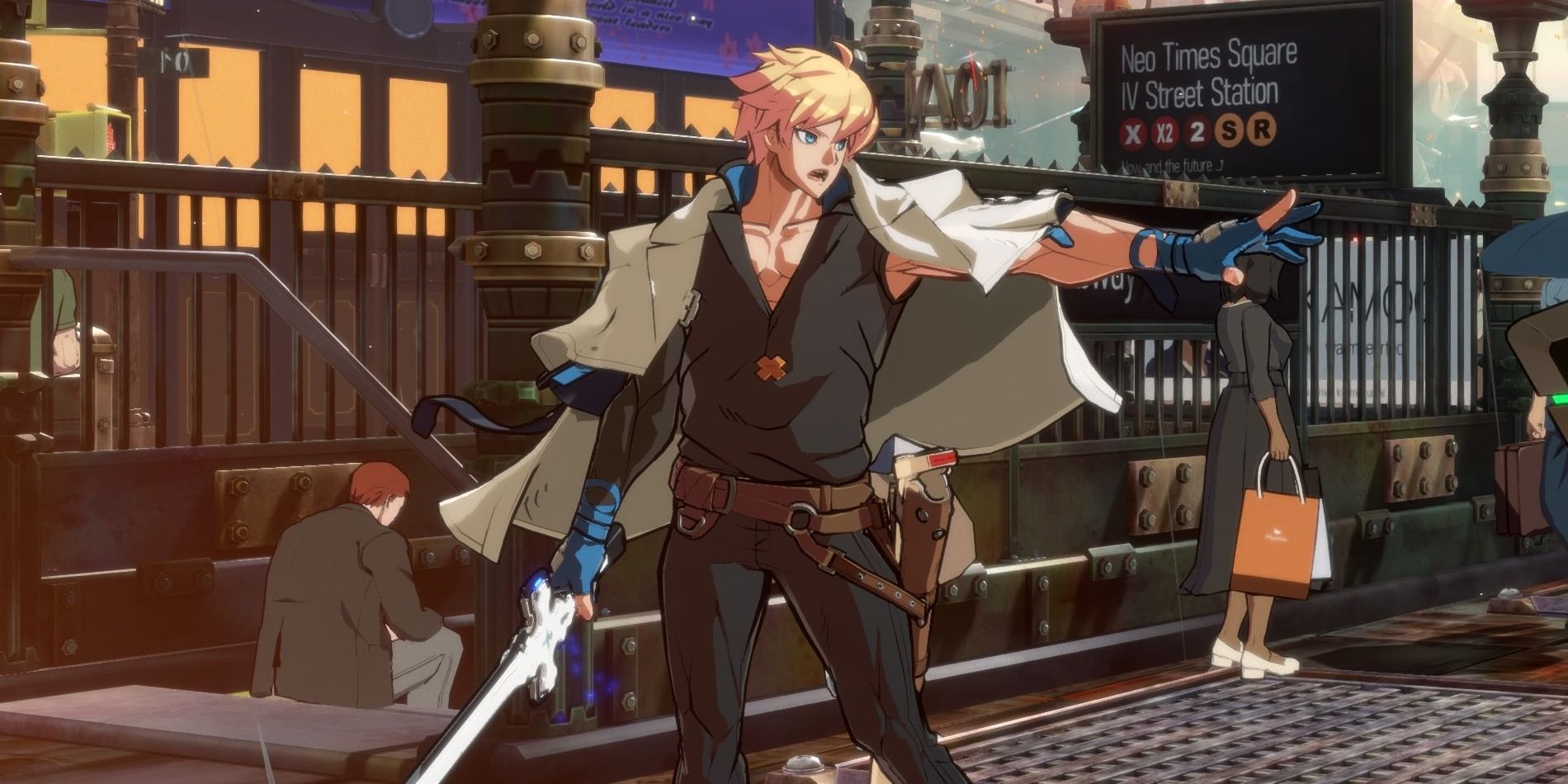 Every protagonist needs a rival, which is precisely why Ky Kiske returns to the roster in Guilty Gear Strive to retain that role. Ky Kiske is an incredible choice for newcomers due to his ability to strike from any distance in the fight.

Ky Kiske is a balanced fighter and a jack of all trades when it comes to his attacks. While Ky doesn’t necessarily specialize in a specific role, his range allows him to be flexible and balanced, which makes him a threat a pretty much any point in the match.

Much like his rival Sol, Ky Kiske also wields a unique weapon, the Thunderseal. With the Thunderseal, Ky can concentrate and amplify his Lightning Magic, then launch lightning projectiles and stun his opponents. Although Ky Kiske can launch attacks from any range, he benefits significantly from mid-to-close range due to his reach and stun potential. 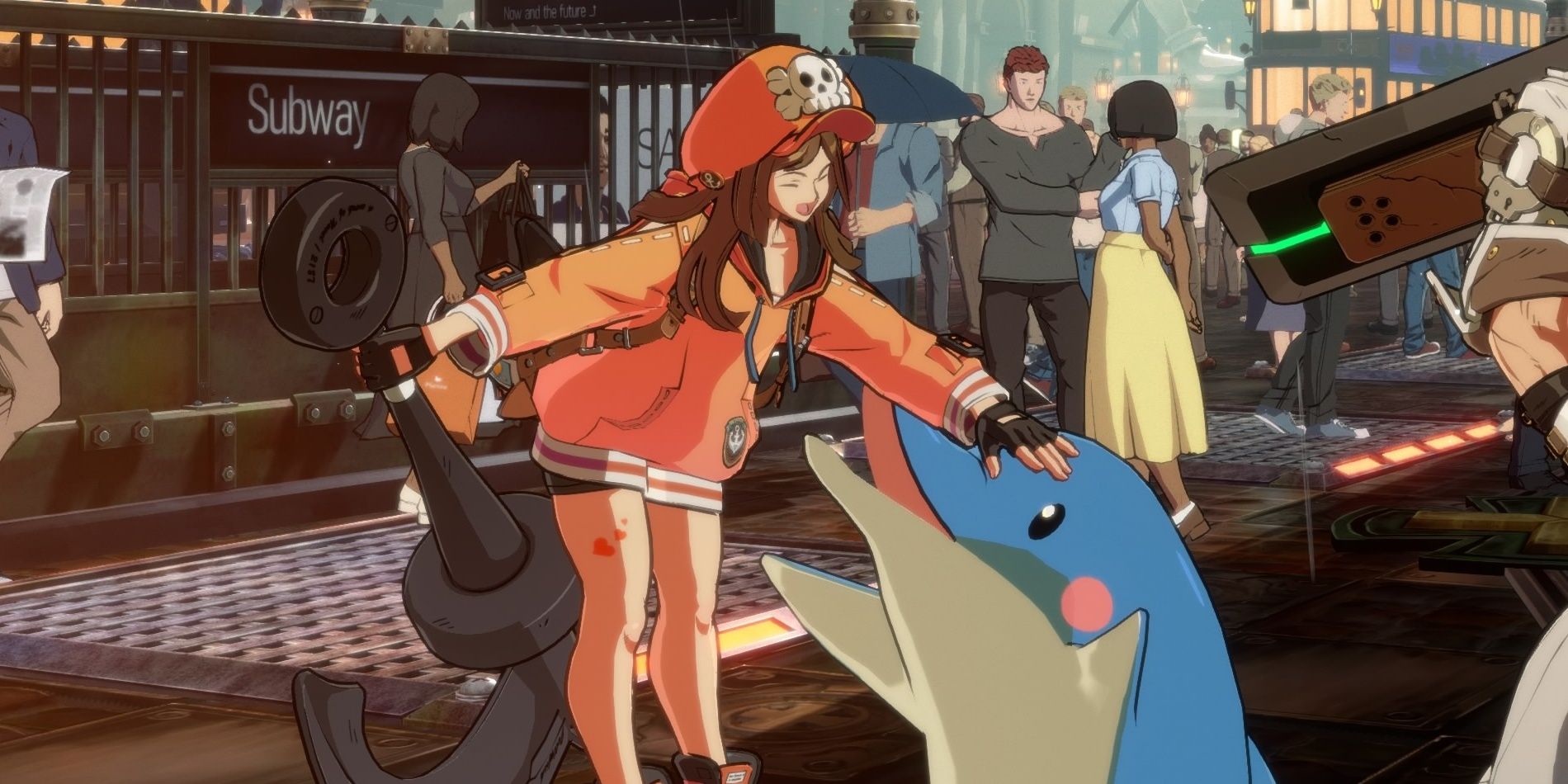 May is yet another returning character in Guilty Gear Strive and is a mighty force of the Jellyfish Pirates. Not only is she an excellent choice for newcomers, but she has great potential to teach you about some of the more unique traits some characters possess without making it too complex to understand or learn.

May’s primary attack method comes in the form of a gigantic sea anchor, which she uses to deliver devastating blows on the opposition. In addition to the anchor, May can summon in her trusty sea companions, Mr. Dolphin, otter Abgehts, and various whales. May’s sea allies give her much-needed range and the ability to close the gap between her and her opponent.

Regardless of May’s difficulty curve from the start, she is an enjoyable character to play and has many tricks up her sleeves, making her a viable choice for most players at any stage of their play. May is primarily feasible at close-range engagements but, thanks to her otter friends, also poses a severe threat at mid-range. May’s moveset is energetic, fun, deadly, and balanced with range to get better and better as you grow with the game. 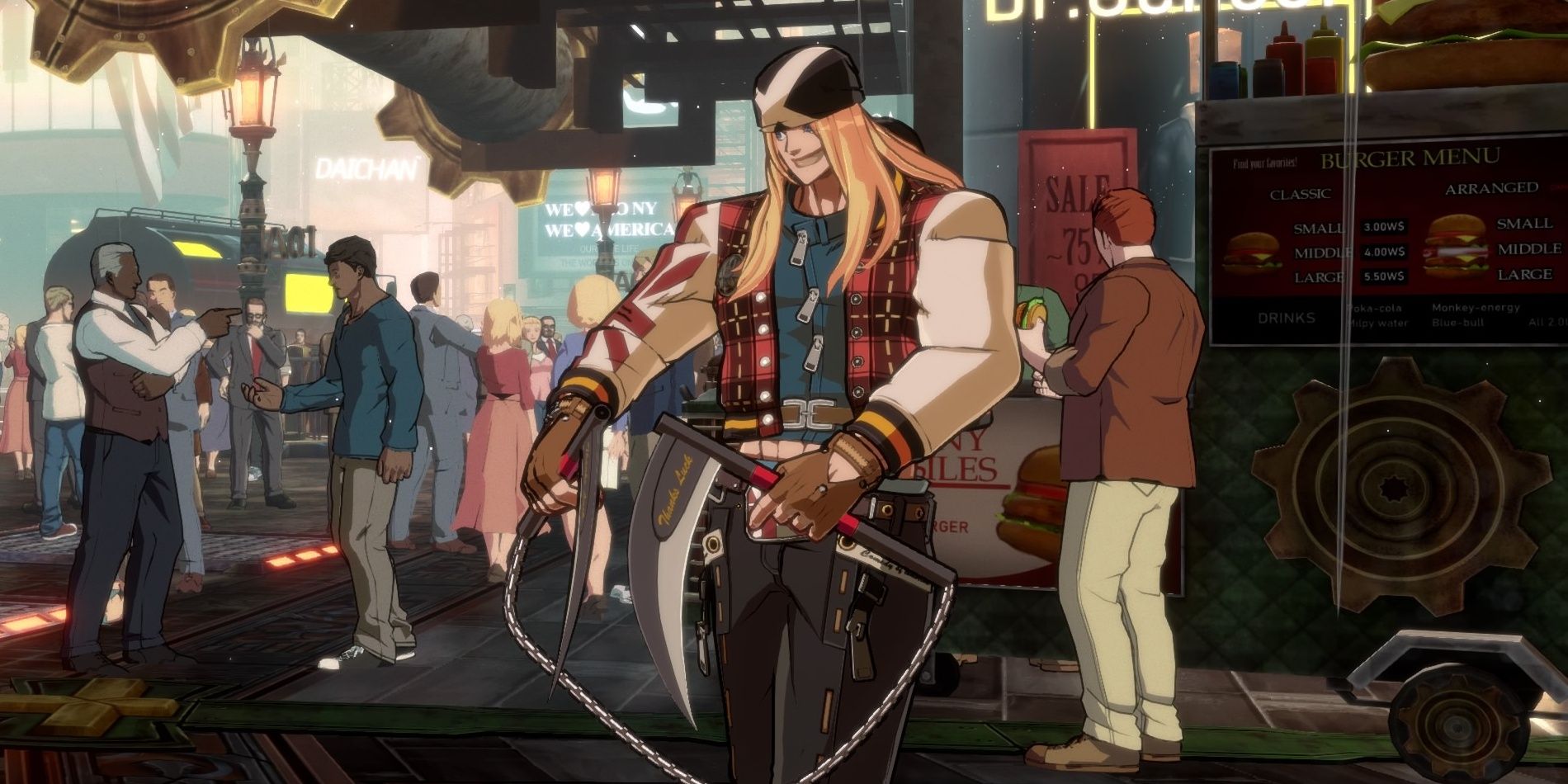 Axl Low has the most challenging learning curve on this list and benefits primarily from long-ranged attacks, which most others severely lack. While not for every newcomer, what Axl offers in terms of range will give players looking for a ranged character a way in, especially when compared to the other ranged-based fighters present in Guilty Gear Strive, many of which can prove challenging to learn for beginners.

With most of his attacks being long-ranged, Axl’s apparent weakness is when enemies can close in on him, making it critical that you keep your opponents in check. While Axl seemingly puts all of his eggs in one basket, he deals significant damage and can frame trap the opposition with most of his basic attacks.

With Axl being the hardest to learn and master on this list and shining in one combat area, it should be advised that he may not be for everyone. If you are looking for a ranged character that can deal large amounts of damage, he will be the best early choice and is excellent for learning how to pace yourself in a fight and play defense.