One of the greatest things about House Flipper is that you’re allowed to design everything and anything to your heart’s content. When you take jobs for money, you can’t sell anything you aren’t supposed to, but you can still rearrange things, buy extra things, and do whatever you want within the parameters of the job’s requirements.

There’s enough from the base game and DLC that House Flipper is just shy of an ordinary life simulator game. That doesn’t mean you can’t try to renovate when you’re buying houses, especially when you can move your office into them and claim it as your own. There are some great places to renovate in the game, providing you have enough money to buy them.

10 Cyberpunk Has Never Been Cooler 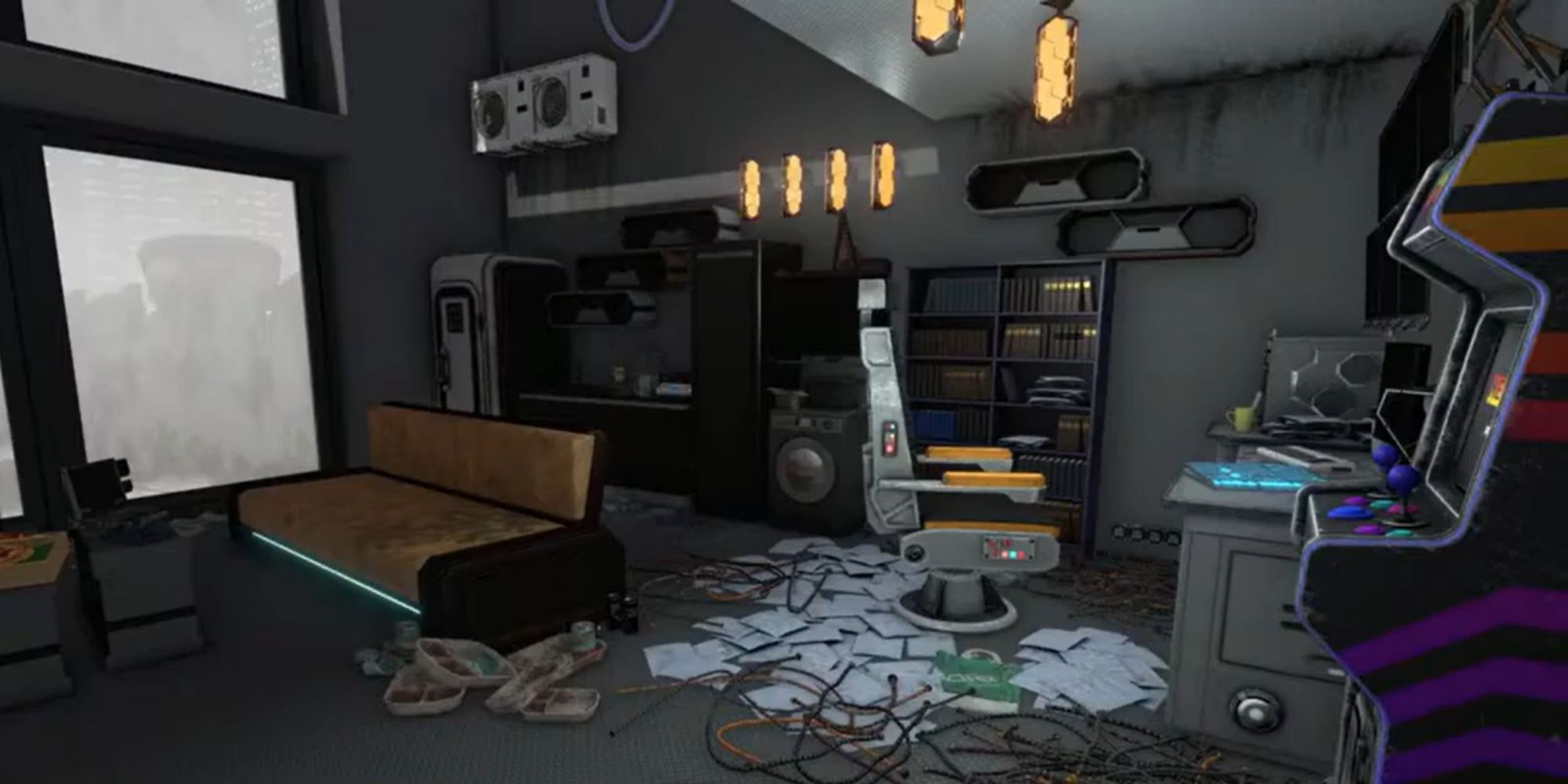 The free Cyberpunk DLC introduced lots of high-tech furniture, or at least furniture that looked high-tech. It also added several apartments available to purchase and renovate, and the Hacker Loft is one of them. The apartment is said to have been owned by an infamous hacker, who scraped enough credits together to leave his past behind.

While it’s already fully furnished and doesn’t need much more than a basic clean, it still looks amazing, and there’s nothing to stop you from changing it up regardless of the furniture inside. If it will please your highest possible buyer, It’s definitely worth putting in a little extra effort to get the best sale possible.

9 A Yacht With An Ocean View 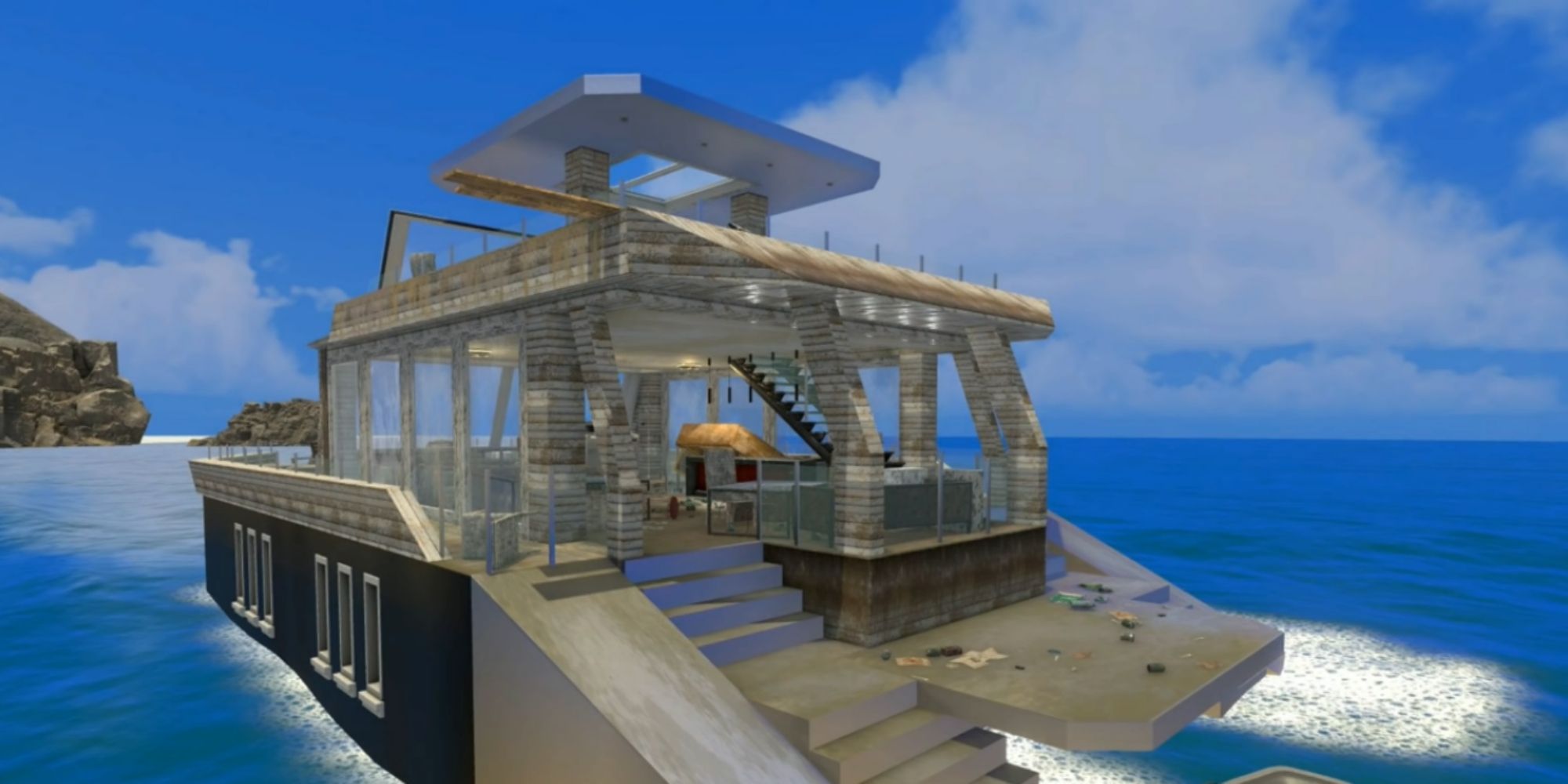 Introduced in the Luxury DLC, the property literally named ‘a yacht with an ocean view’ is hard to beat. According to the game, the yacht was found abandoned in a nearby bay until the city claimed it. Now, it’s up for sale and you could be the lucky person to buy it, renovate it, and sell it again.

There’s mostly cleaning to do and fixtures to replace inside the yacht, but it’s one of the few unique house locations in the game. Almost everything else is surrounded by other generic houses in generic neighborhoods. The ocean view is worth the price.

8 Claim The Dragon Balls For Yourself 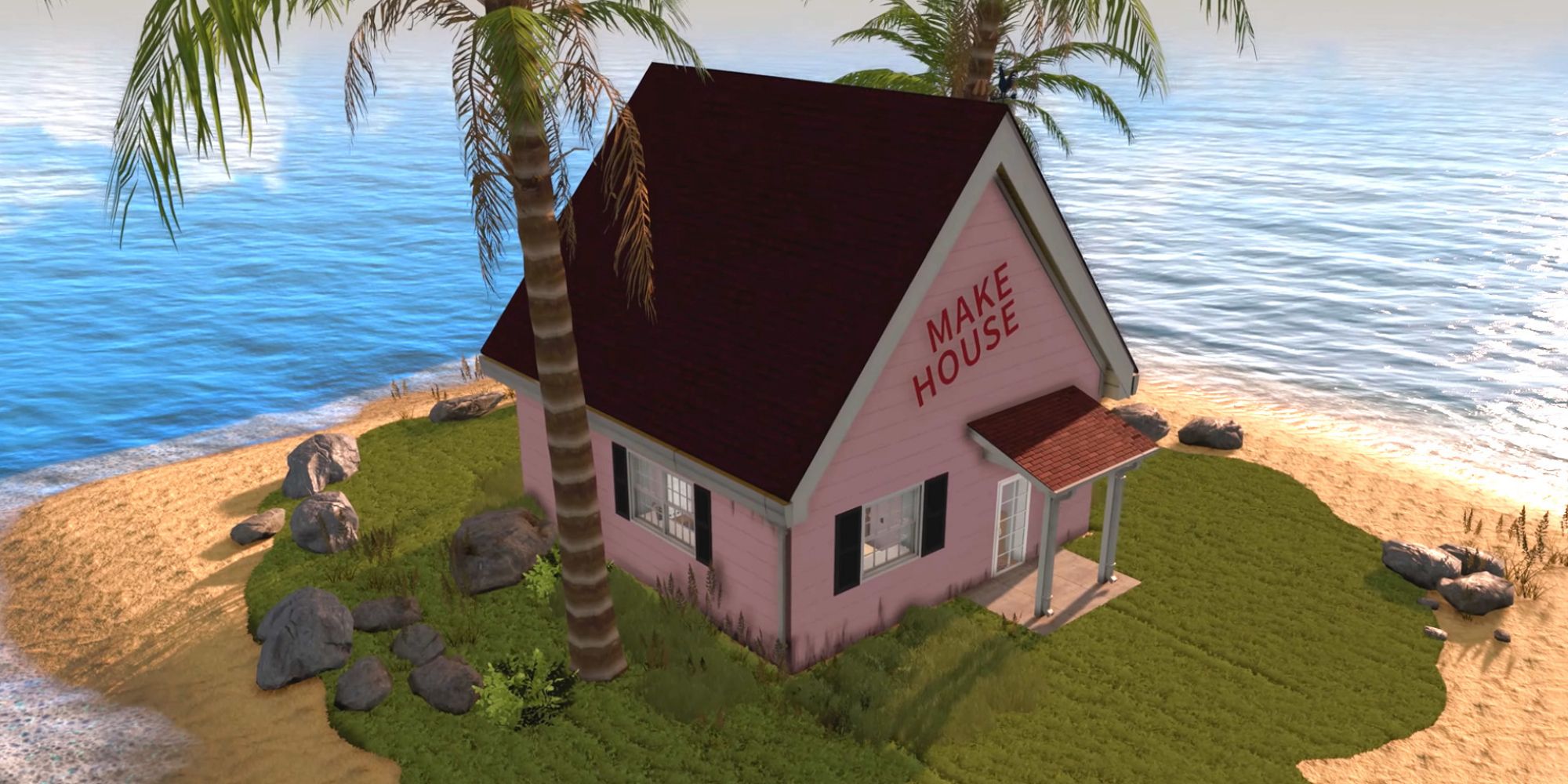 When scrolling through the list of houses to renovate, you might find that the Turtle House catches your eye. It’s actually a reference to the Dragon Ball anime, recreating a known location: a house that belongs to Master Roshi. The house is covered in references to the show and the character, mostly hidden in the magazines laying around.

Among the usual renovations, you are also tasked with collecting seven golden orbs known as flipper bells, which are meant to refer to the seven important Dragon Balls from the anime. Once you have all of them, you can control the day and night cycle around the property from their display case. 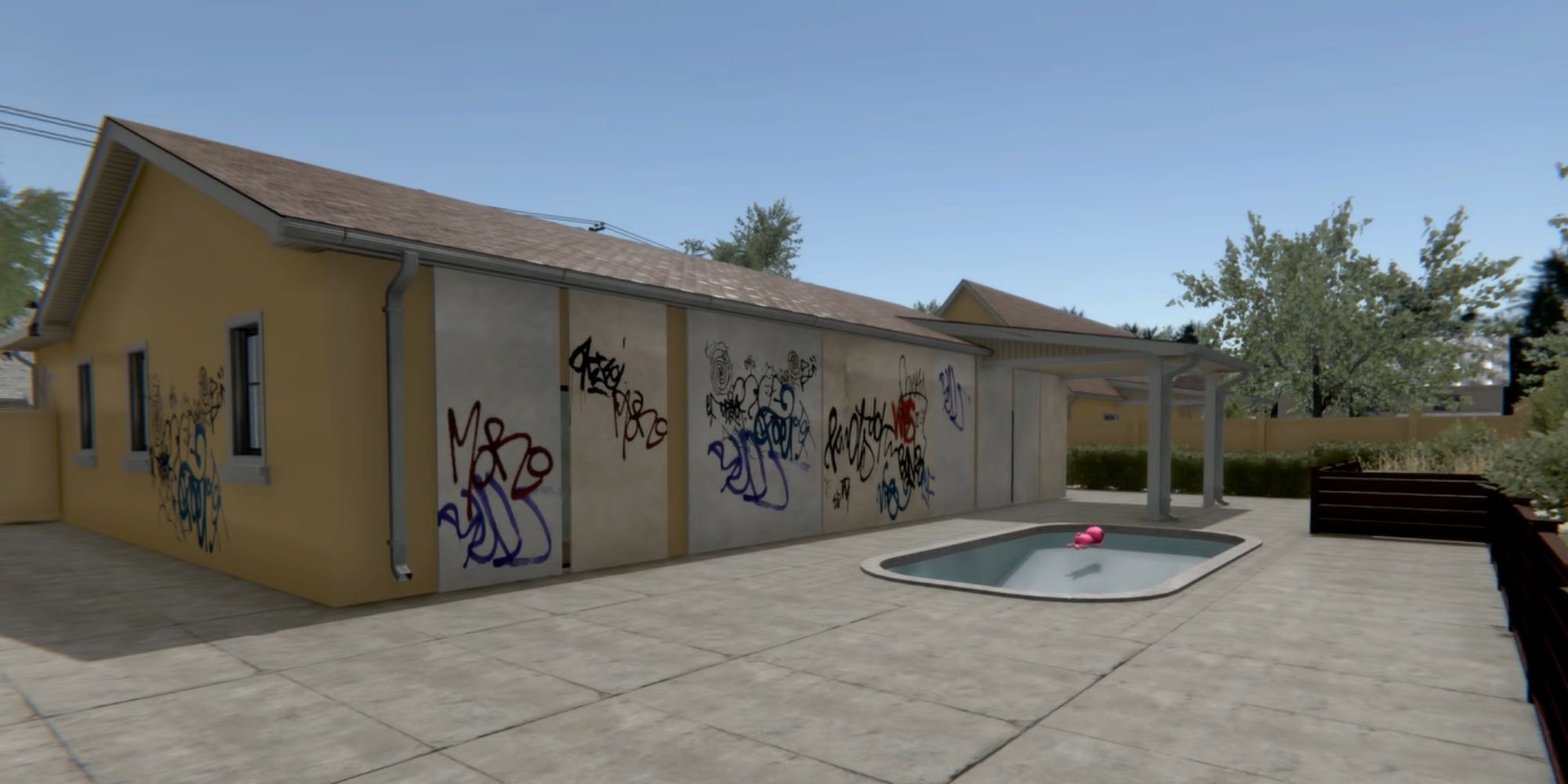 The Huckster’s House may look like a run of the mill, one story house from the outside, but it’s actually a reference to the TV show Breaking Bad. It’s a recreation of the house the main character, Walter White, and his family lived, and even includes the garage where he made his drugs.

While you’re renovating the house, you’ll stumble across a hole full of money that can’t be removed. If you want to hide the evidence from what the previous residents left behind, and not get into trouble with the law yourself, it’s best to cover this with a rug or a different piece of furniture.

6 There’s A Curse On This House 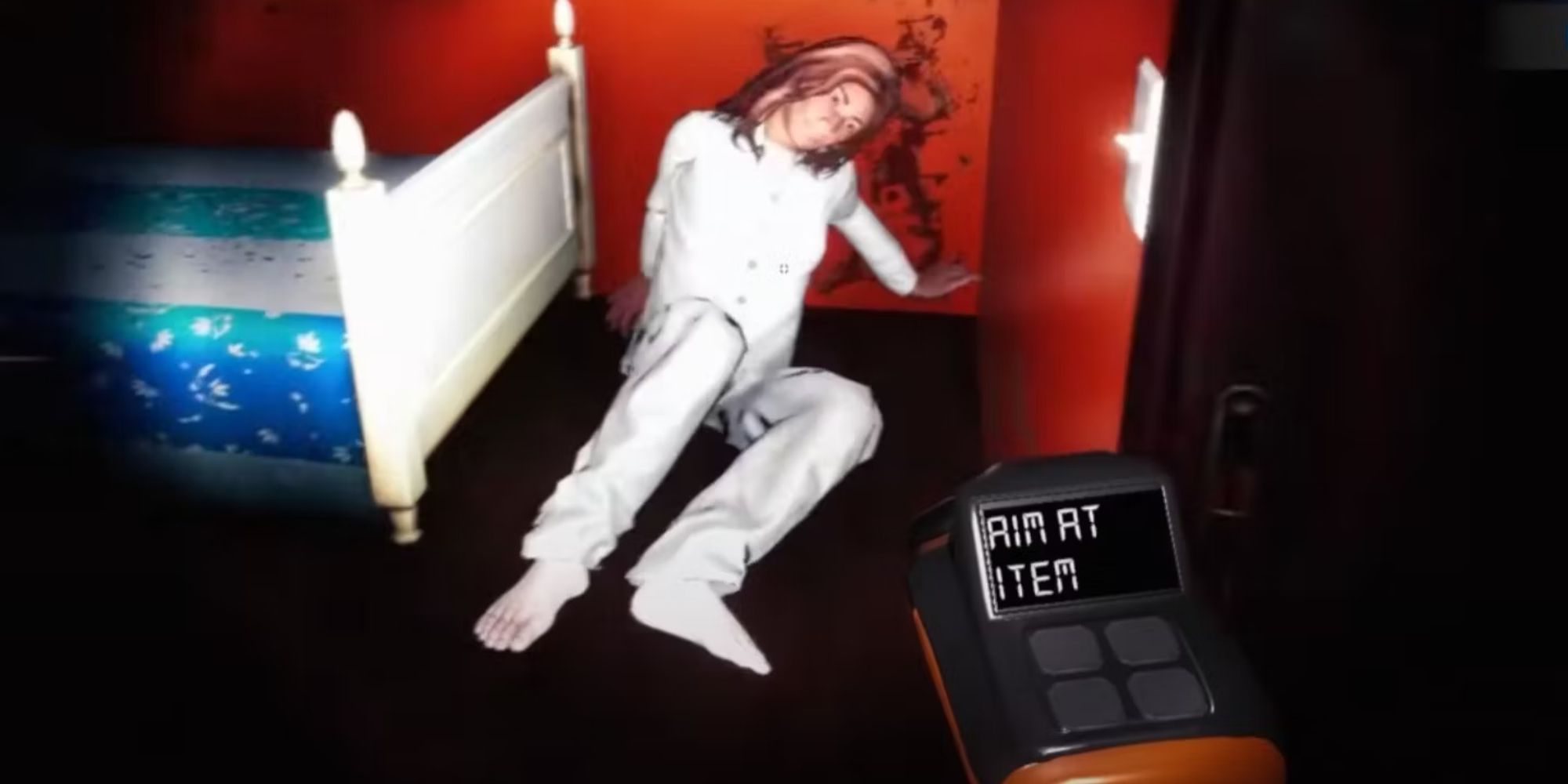 The first thing you may note when you buy Samarta Myers’ House is that the renovation takes place at night. The second may be the chilling laugh you’ll hear, because, if you look behind you, none other than Michael Myers is hiding across the street. That’s right, House Flipper embraced the horror of their game and made a horror level, referencing the Halloween movie series.

Aside from Michael Myers, you’ll also find a Scream mask above the fireplace that changes its expression every few minutes, and a ghost waits on the second floor to jumpscare you. It’s easy to put an end to the horror if you want to, however. Simply bury the coffin in the backyard, and you can get back to your regularly scheduled renovation.

5 Alone For The Holidays 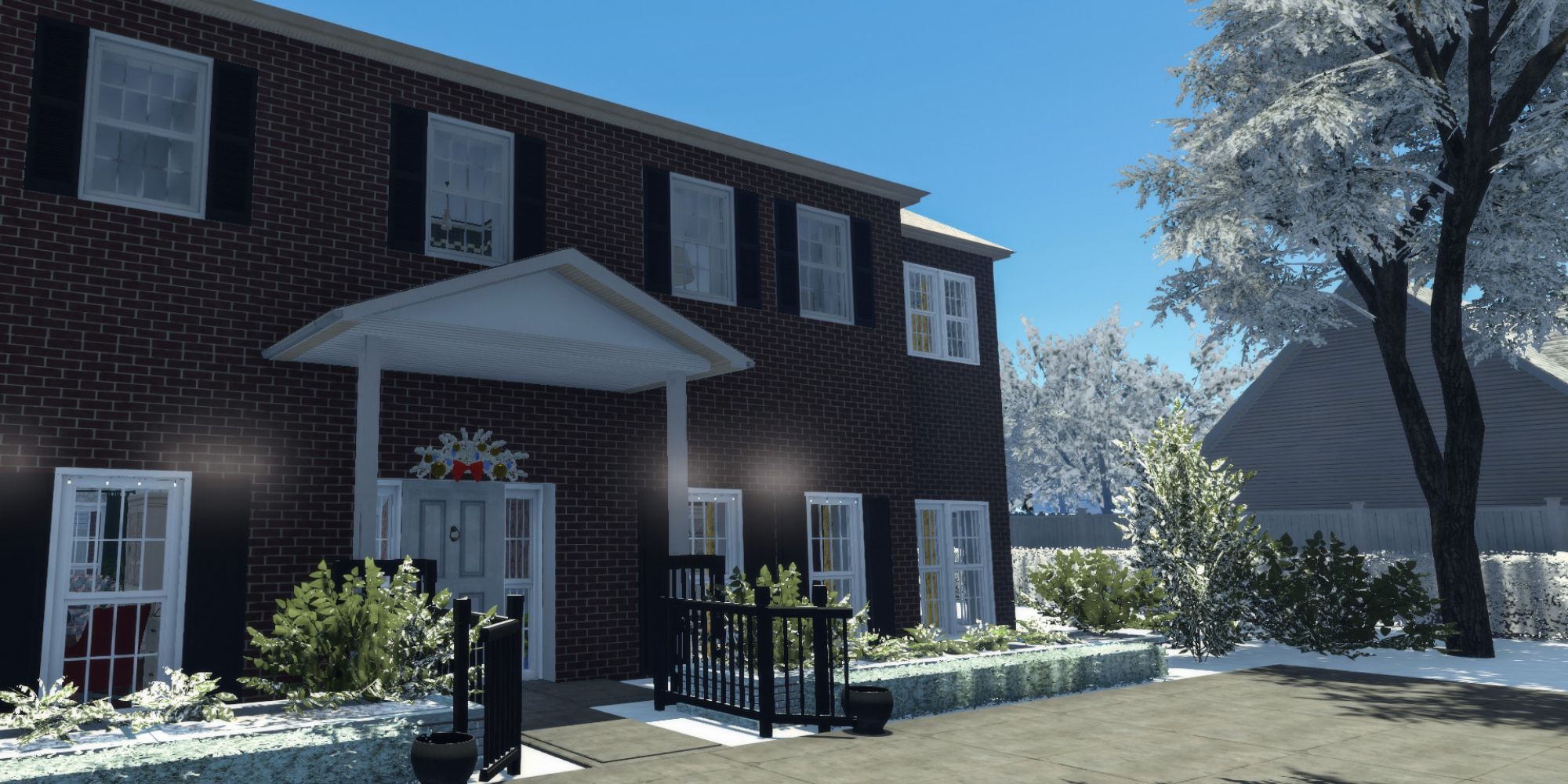 In a Christmas update, the Alone Home was added to the game — a near perfect recreation of the house in which Kevin McCallister lives in the movie Home Alone. See classic rooms remade inside the house, and clean up the mess left behind after all of the traps were activated.

The house is large, with two floors and a basement, so you’ll definitely have a lot to do here if you want to fix the place up. Once you’ve cleaned everything and replaced the fixtures that need it, there are a ton of rooms waiting for you to redecorate. Just make sure no one tries to steal from you while you’re working.

4 There’s A Lot Of Pizza To Clean 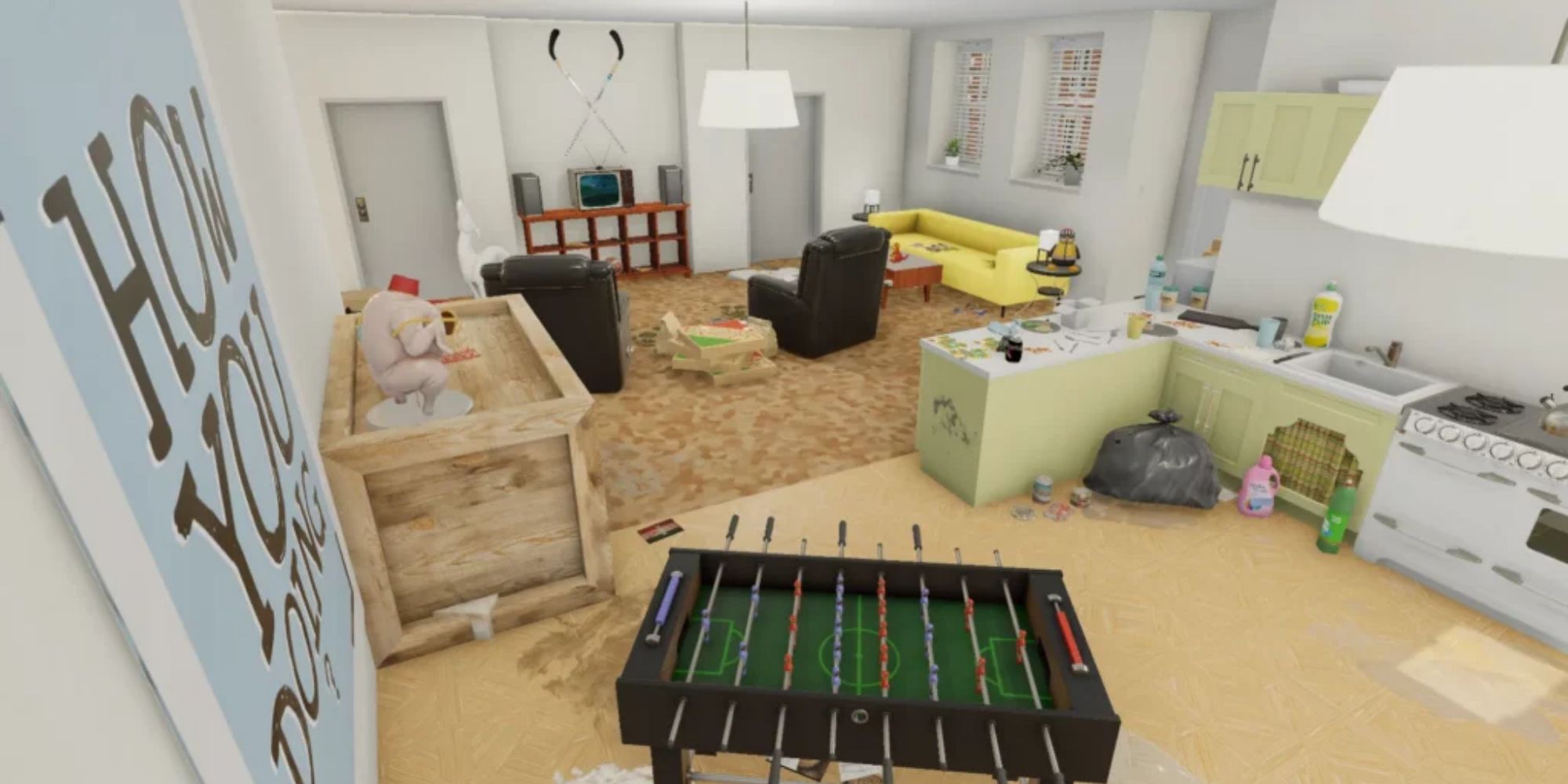 ‘The one to flip’ is a small apartment in House Flipper that is a recreation of Chandler’s apartment in the popular Friends TV show. The two signature armchairs sit in front of a small TV, and there are a lot of empty pizza boxes.

There’s not much to do outside of cleaning the apartment, so it’s up to you whether you want to redo the apartment or leave it in its classic look. There’s always upgrading it too, if you want to give the classic apartment a more modern appearance.

3 Bring Your Friends Over 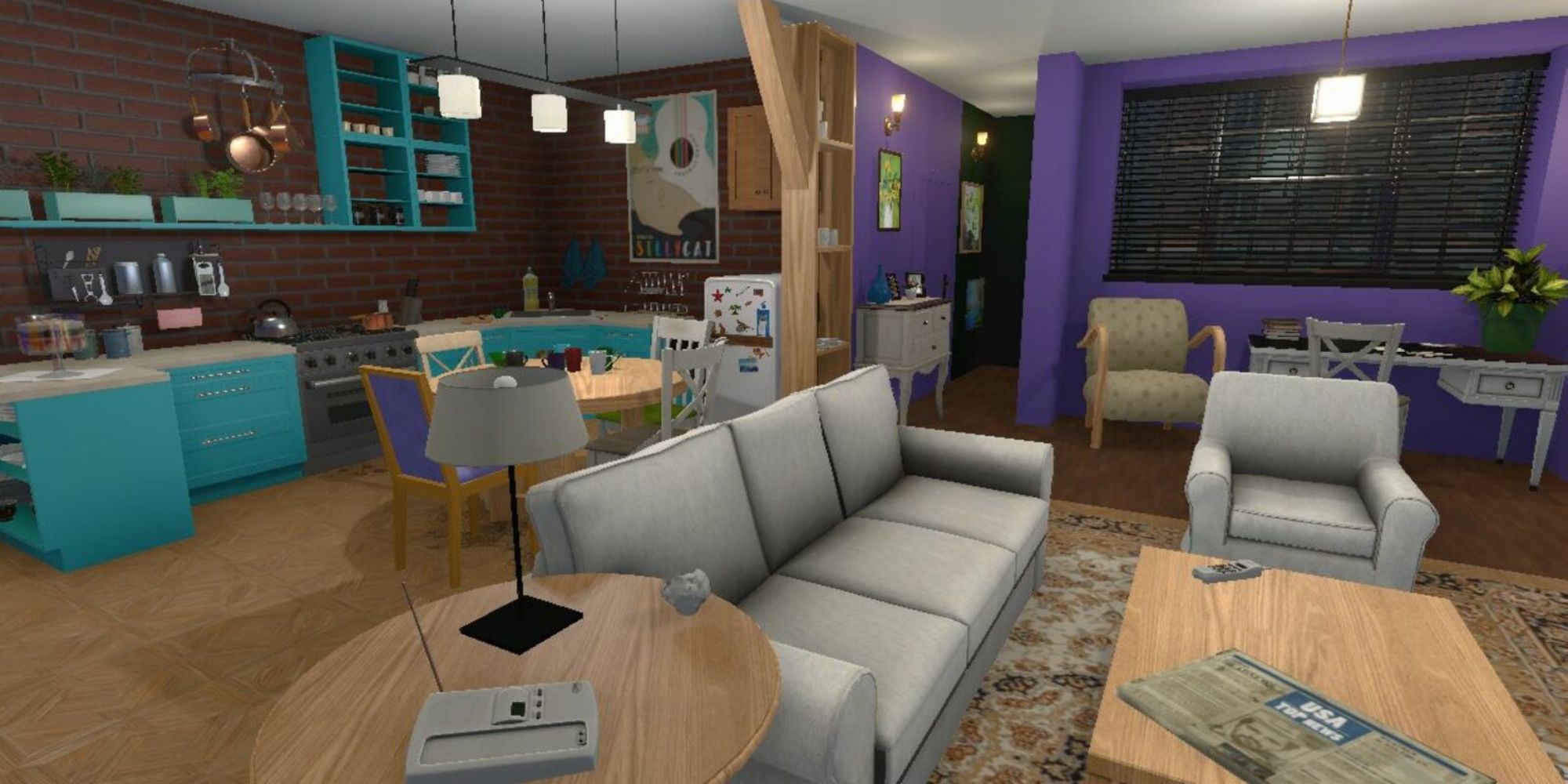 Visit Rachel and Monica’s apartment from Friends in ‘The one to move in’. The living room and kitchen are almost identical to the classic apartment, even down to which walls are painted and which walls are exposed brick. While they are both completely spotless, the bedrooms are less than perfect.

Clean up the apartment and then do what you want to it, from making it your office and living your days as if you were on the show yourself, or completely redoing the space to make it something different. Either way, you can enjoy a great view. 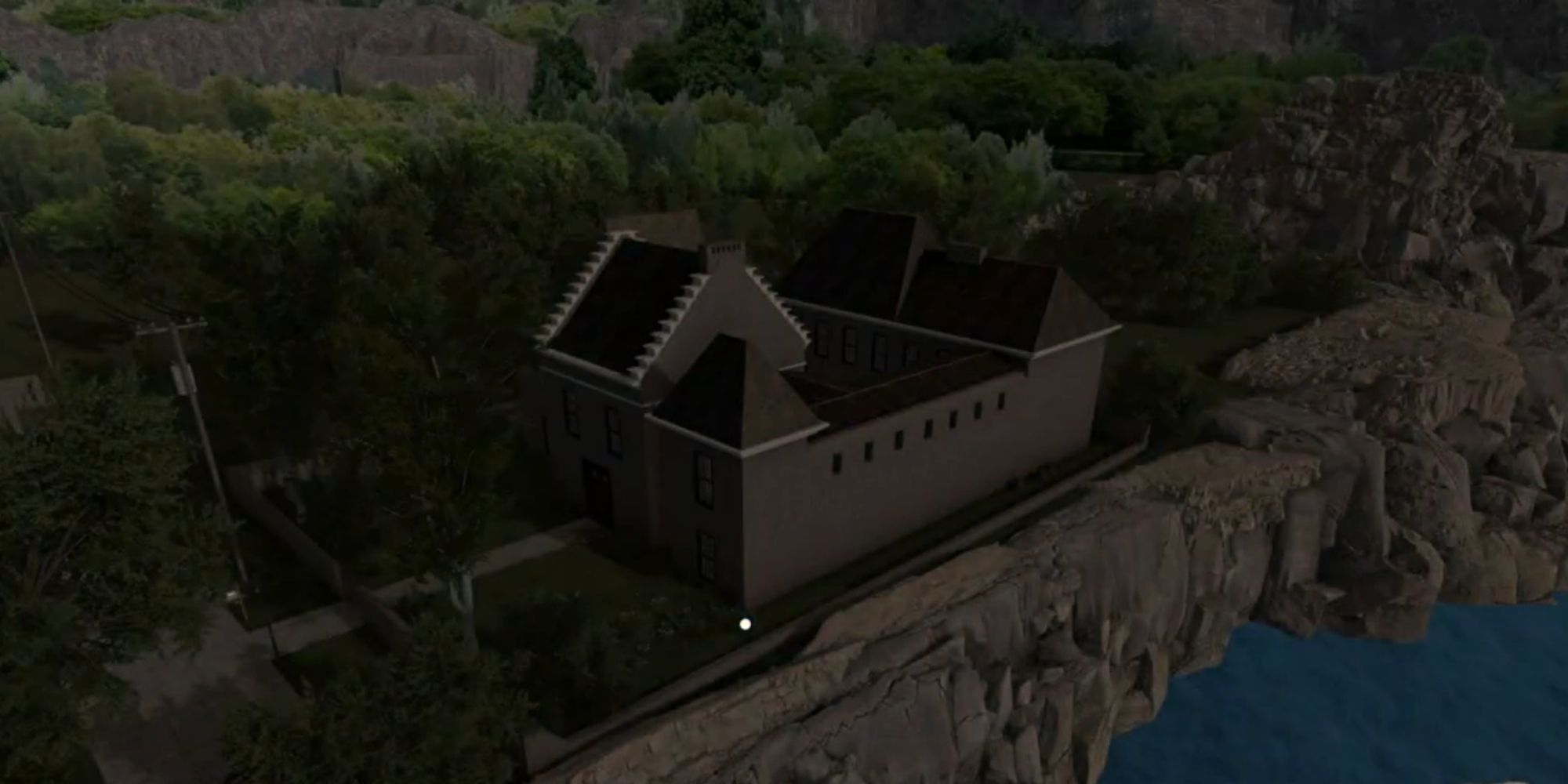 You might want to bring a crucifix to this castle, or you might end up like the many previous owners who became anemic and suffered from night terrors after staying here. The Castle, as it’s called in the game, is a reference to Dracula. From old-looking architecture and furniture to a full crypt down below, there are plenty of secrets to discover here.

The apparent fear of the supernatural here could be in line with some of the strangest simulator games, especially considering you never really ever see another person in the game. Still, the property is set at night, so there’s always the fear of something lurking around the corner in a castle as big as this. Be sure not to miss grabbing the broken mirrors as you go around cleaning the place up.

1 Houston, We Have A Home 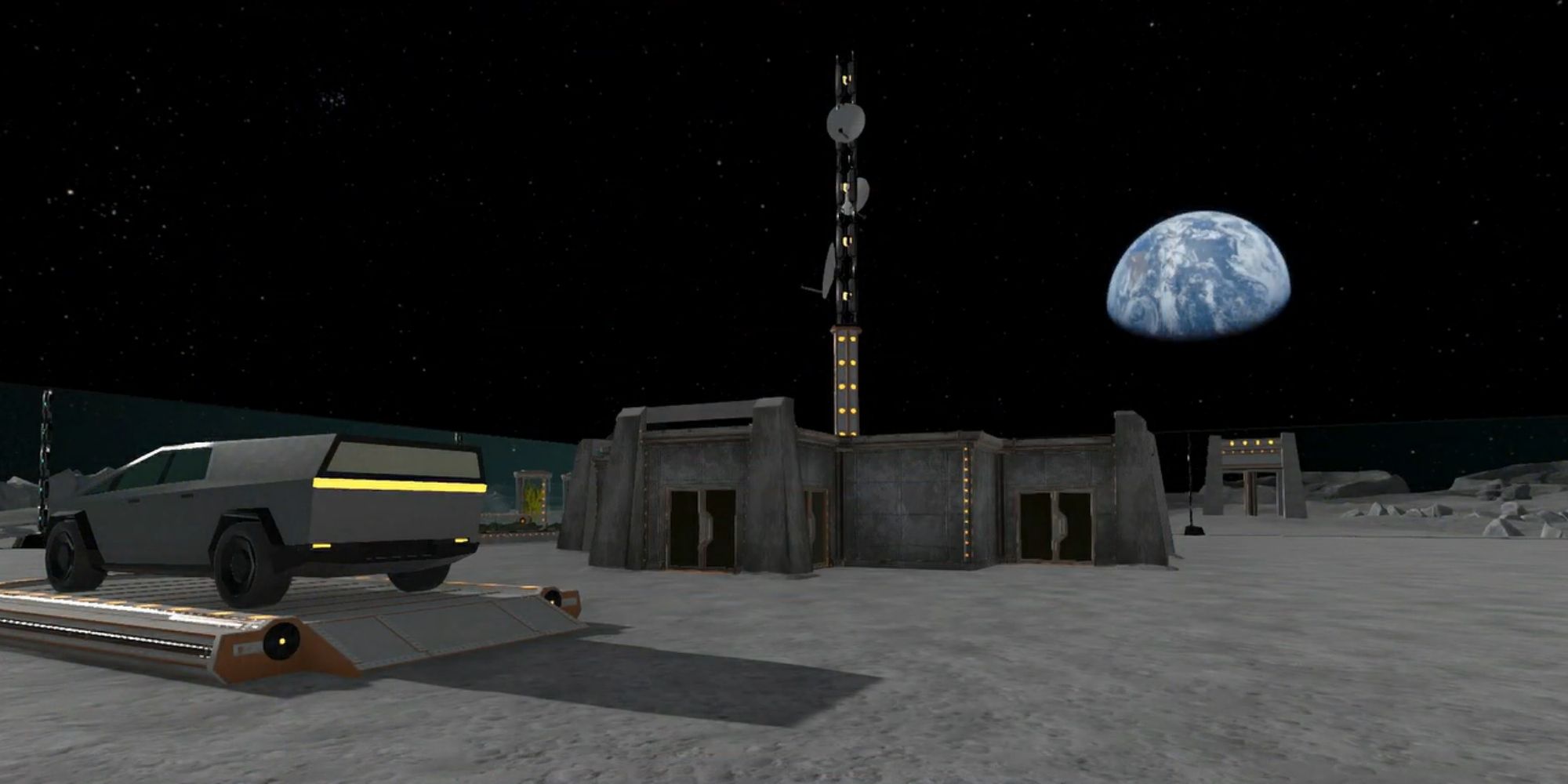 House on the Moon is one of the coolest locations in House Flipper. Instead of being in your normal neighborhoods, you get to literally go to the Moon to renovate and sell a house there. Or, you could move yourself in and live on the moon.

Once you get the cleaning and the fixture replacing out of the way, the inside has a lot of potential waiting for your hands. Fully deck it out in cyberpunk furniture to make it really feel like you’re in the future, or make it feel more whimsical and out of place with wacky wall colors and decorations. Just don’t forget to enjoy the view of Earth while you’re up there.