Animating an ornate, beautiful door in a video game has been said by several developers to be one of the most laborious design processes ever; Death Trash developer Stephan Hövelbrinks, for instance, have said that doors “have all sorts of possible bugs” and can be “a lot of pain”, whereas Crystal Dynamics game director Will Kerslake has, in an interview with The Verge, talked about how there are “so many issues with doors”. Part of the problem with video game doors is that they can be interacted with in so many ways and across so many different situations, that getting all these right can be a tall task. How would doors open and close during combat situations? What happens if an object is obstructing the door’s path? For all these reasons, many developers simply do not want to deal with the nitty-gritty of functional doors and decide to just dispense with them altogether. One example is the Assassin’s Creed series; with the exception of Valhalla, the series has mostly chosen to not feature doors in its games at all.

So it came as a surprise when I chanced upon an indie game that is all about doors. Doors, doors, and more doors: you open them, close them, walk in them, and explore different realms through them. There are even fake doors to open, and doors on the floor to drop your entire body through. This particular game is called Just More Doors, developed by French indie studio Teagher Studio, and is an exploration game in which the point is to open as many doors as possible until you achieve a nebulous victory… of sorts. I was curious about how much work it takes for the studio to make a game full of doors, and whether it was a logistical and design nightmare for them. The short answer is that it isn’t—but there were other challenges they had to overcome.

“For Just More Doors it was easy because we made it simple: [you’re] a FPS player without hands, etc. However, due to the fact that the world generates itself when opening a door, there's quite a lot of code behind the opening of doors,” Thomas, the co-founder of the studio, tells me over a message. “We made an entire game about doors, but we made the right decisions to avoid all the things game devs hate about doors.”

To break it down briefly, doors in Just More Doors are interacted with from the first-person perspective, with no hands involved. That means when you go near a door and engage with it, the door simply swings open—there is no hand animation to push the door open, or to fiddle with the doorknobs. At the same time, only one door can be open at the same time; if there’s another door that’s open, it’ll immediately swing shut when you open the door in front of you.

“You see, in Just More Doors, we generate the world with a set of predefined rules depending on the actions of the player. But to optimize it, we need to also deconstruct the world behind the player, without them noticing it. So we need to close the door behind the player while pushing them in the next room. If not, they would see the previous room being destroyed and would sit in the middle of nowhere,” Thomas explains. 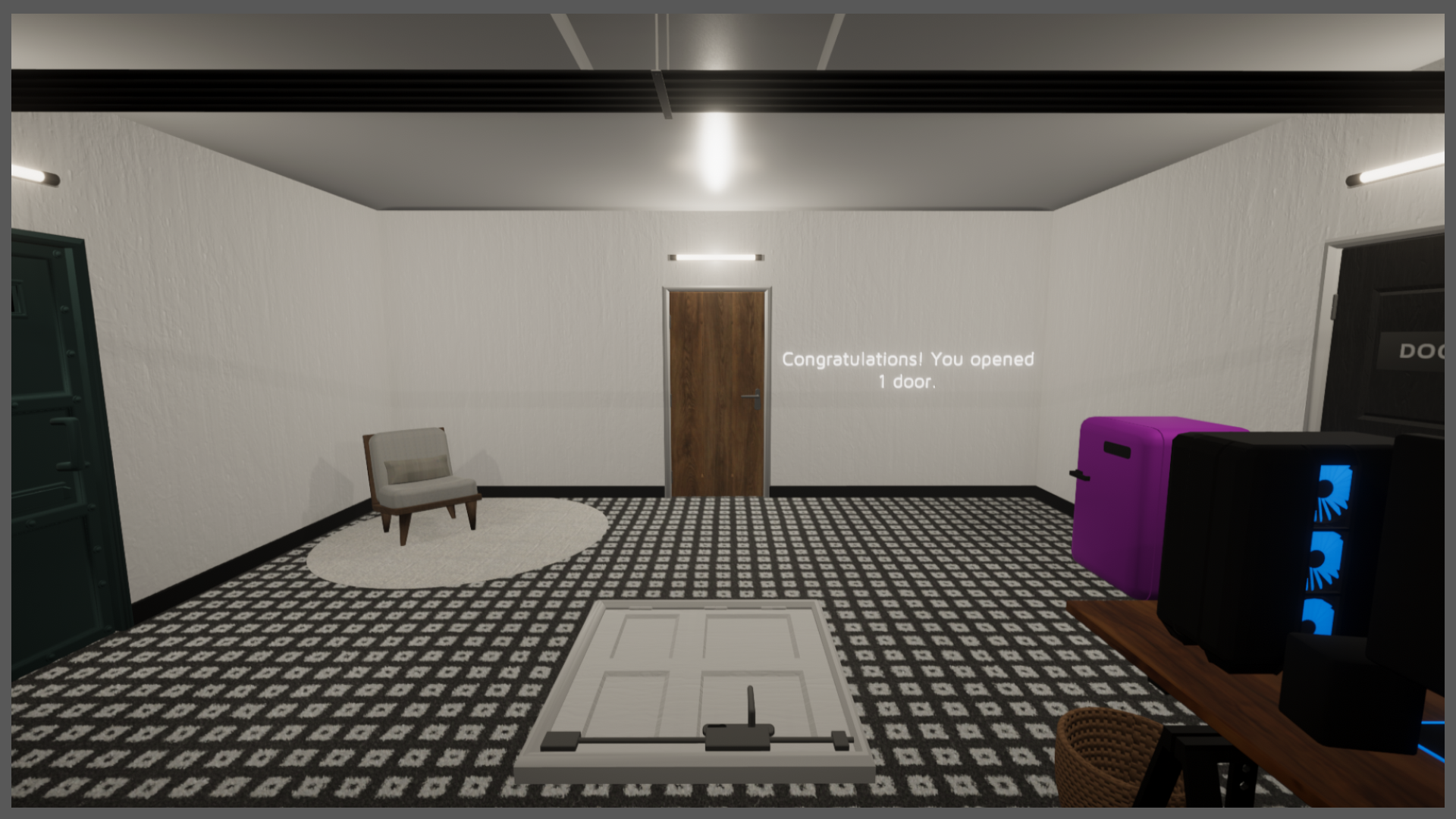 Nonetheless, the concept of making a game centred around doors is still an interesting one. More than just a simple point of entry for players to go from room to room, doors can also represent progression, even building anticipation for events that may take place within the game. The studio hopes to turn this idea on its head by inviting its players to contemplate about the joys of such anticipation, especially when they reach the ending. “The game is 100 percent based on the fact that you're guided by the simple promise of something great awaiting behind the door. You open doors and doors and doors to only think that it leads to nowhere. But you'll continue for a few more, because, well, imagine you stop but you were only one door away from the victory? And we pushed this idea as far as we could,” Thomas says. “Watching the players discover all the hidden things in the game is really pleasant, and the face they do [make] when they discover the ending is just priceless.”