Despite its huge cultural footprint, pen and paper role-playing games are a relatively tiny part of the larger tabletop games industry. Last week The Orr Group, the team behind the popular Roll20 virtual tabletop suite, published its latest numbers on who’s playing which tabletop RPGs online. It’s a rare look into the relative size of games like Dungeons & Dragons and Pathfinder.

Roll20 is a unique platform that allows players to share video, audio, and text chat alongside a shared tabletop experience. Users can roll virtual dice, move miniatures around on the screen, and even play with a flesh-and-blood dungeon master while logged in from anywhere in the world. It’s the most popular way to play tabletop RPGs online, and boasts more than four million registered accounts. As such it’s an excellent window into the larger trends in tabletop RPGs. 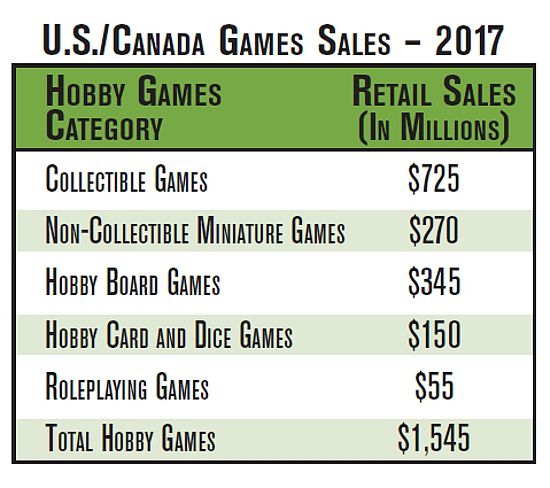 Numbers are estimates only.
ICV2

Of course, there are plenty of caveats to this data dump. Not everyone who plays tabletop RPGs does so online, for one. Roll20 also has a close publishing relationship with Wizards of the Coast. New content for D&D drops in stores around the same time that it shows up on Roll20, so they’re likely to have more D&D players for that simple reason alone. At the end of the day, how representative the Roll20 platform truly is of the overall RPG landscape is up for debate. But it’s more or less the only data set out there.

What this year’s report shows is that, to no one’s surprise, D&D is far and away the most popular tabletop RPG in the world. Nearly 52 percent of the campaigns running on Roll20 are using that system, while more than 54 percent of individual accounts are involved in D&D games. Coming in second in both categories is Pathfinder, which is on the eve of its second edition launch. But only 6.46 percent of Roll20 campaigns are Pathfinder campaigns. That’s a massive delta between first and second place.

What’s interesting about this year’s numbers is the growth of Call of Cthulhu games, which span a number of flavors and editions from various publishers. They represent more than 9 percent of the campaigns being run on Roll20.

But also note the “uncategorized” category. That’s where the majority of your smaller, independently-produced RPGs are going to live. To my eye, that part of the landscape represents much of the creative growth and churn that makes tabletop RPGs so interesting to play and follow. The Orr Group is using slightly different tools and metrics than in years past, so this report isn’t a direct comparison to previous years. Look for the 2020 report around this time next year.