A recent Forrester report commissioned by Capital One noted that while container adoption in the enterprise was growing as part of a broader transition to the cloud and microservices, businesses that used container management platforms struggled with the compliance aspect of meeting industry regulations and enforcing policies. Portability — deploying applications in any cloud environment — was also cited as a core issue.

This is something that Nirmata is setting out to solve, with a unified management platform for Kubernetes clusters designed for enterprise developer operations (DevOps) teams. The San Jose-based company is also the creator and chief contributor to ultimately wants to Kyverno, an open source policy engine for Kubernetes.

Nirmata, ultimately, wants to “conquer Kubernetes complexity,” and to help inits mission the company announced today that it has raised $3.6 million in pre-series A funding to “capitalize on the full potential of Kubernetes-native policy management.”

Containers are software packages consisting of all of the components required to operate anywhere, from public clouds to private data centers — they help solve the problem of how to get software to play nice when moved between environments. Kubernetes, meanwhile, is a popular open source orchestration platform that originated inside Google, and which serves to automate many of the otherwise resource-intensive manual processes involved in managing containerized applications.

One of the biggest draws of Kubernetes is that it helps accelerate development velocity and agility. However, it may surprise few to learn that companies are often more inclined to focus on the design and deployment stages — or “day 0” and “day 1” — in their haste to spin up containers. However, an application’s lifecycle extends far beyond its deployment stage — in production, it needs to be properly monitored and maintained to ensure it’s robust and secure. This is what is known as “day 2” operations, which is the time between the deployment of a Kubernetes cluster and when it’s upgraded to a new version. This is where Nirmata and Kyverno come into play.

Companies deploy Kyverno inside each Kubernetes cluster, which then acts as an admission controller for governing how the cluster is used and enforcing policies. “It has visibility to every request made to Kubernetes and can apply policies based on specified triggers and conditions,” Nirmata cofounder and VP of products Ritesh Patel told VentureBeat.

As the creators of Kyverno, Nirmata is the main code contributor as you might expect, but other notable companies have contributed as per data provided by the CNCF — these include Dell, Red Hat, Google, and Nextdoor.

Nirmata’s commercial customers include the New York Times and Duke Energy, though it claims a number of other notable enterprise clients that it wasn’t at liberty to divulge. The open source Kyverno, meanwhile, is used independent of Nirmata by a number of big businesses including Dell, Nextdoor, and Indian grocery delivery service Grofers.

“The number one problem we solve for enterprises is to eliminate challenges with day 2 Kubernetes,” Patel said. “Today there are several ways you can bring up Kubernetes clusters, but the main challenge continues to be operationalizing these clusters in a secure, scalable manner for use by developers.” 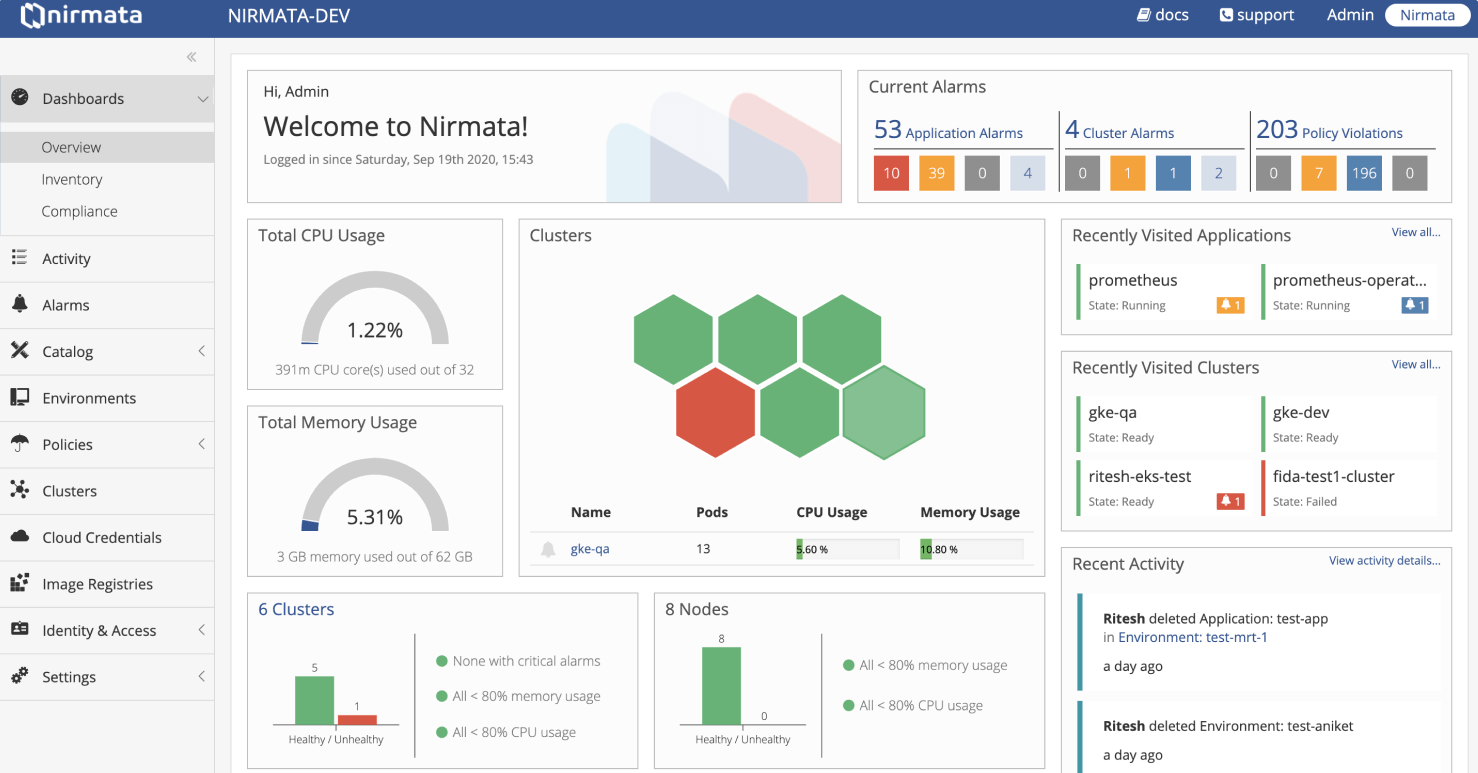 While commercializing Kyverno is a core raison d’être for Nirmata, the company ultimately exists to simplify day 2 Kubernetes operations and management — and that is why Nirmata’s SaaS pricing is divided into two core products. The “Nirmata Kubernetes platform” is a comprehensive turnkey solution that provides everything from cluster lifecycle management and workload management to policy management, and is targeted at companies looking for the full shebang including multicloud and hybrid cloud support. This competes with the likes of Rancher Labs and Red Hat’s OpenShift.

And then there is the “policy manager for Kubernetes,” which focuses specifically on full lifecycle management for Kyverno policies, such as providing compliance reporting, alerts, and giving broad visibility into policy violations. Companies can use this along with any other Kubernetes platform, such as OpenShift and Rancher.

The story so far

Nirmata’s origins can be traced back to 2013 when Patel — and his two cofounders Jim Bugwadia and Damien Toledo — founded a company called Nirmata Container Solutions to provide cloud-native and container solutions within the docker ecosystem. Fast forward to 2018, and the trio relaunched the business simply as Nirmata — it was at this point that they worked directly with customers to identify a need for a “secure, self-service Kubernetes platform while ensuring guardrails,” according to Patel.

The policy management facet of their offering was originally baked into the Nirmata platform, but it was carved out as a separate policy engine in 2019, rebranded as Kyverno, and then donated to the Cloud Native Computing Foundation (CNCF) last year.

Prior to now, Nirmata has been funded via a small amount of convertible debt, in addition to revenue gleaned from consulting services and product sales. With another $3.6 million in the bank from investors including Z5 Capital, Samsung Next, Uncorrelated Ventures, and Benhamou Global Ventures (BGV), the company is now well financed to build on its growth over the past year which has seen Kyverno’s downloads soar past the 6 million mark.

More specifically, Nirmata said that it plans to scale its operations to support the growing Kyverno community, and intends to establish an engineering team in India.