Twitter has made its first foray into the exciting world of games development with the launch of a cheery little game called Twitter Data Dash—a 2D platformer that seeks to explain the social media giant’s arcane privacy policy in a supposedly easy-to-digest manner. I say ‘supposedly’ because the game itself can be immensely frustrating to experience. And contrary to its express purpose, it doesn’t really help you understand the platform’s privacy policies any better either.

But I would commend Twitter on one thing: attempting to make what used to be an impenetrable wall of text a little simpler for the layperson to comprehend. As we all know, the privacy policy used to be a bunch of words for only the most hardened of privacy advocates to plough through; most of us just click ‘agree’ with our eyes glazed over, so we can move on to doing the fun stuff, which is tweeting about we have for lunch, pictures of our pets, and our collective scorn towards Elon Musk. To that end, Twitter had simplified all the legalese on its privacy policy page (which you can see here, if you like), and created the Twitter Data Dash game to go along with it.

On paper, this sounds like a great idea, but Twitter Data Dash just doesn’t seem like the best vehicle to convey this message. The game features a cute little blue pupper called Data, and you’ll need to walk Data through the land of PrivaCity, a place so cluttered with obstacles and floating bricks that it’s impossible for anyone to live in this space. Aside from making your way through the game’s four levels, you’ll also need to collect bones and avoid baddies, like cat adverts, and other things that will bludgeon your dog into surrendering your bones (okay, not really—your bone counter will just dip). When you complete the level, Twitter will inform you about how its privacy policy works in a single paragraph, alongside a button that will tweak your Twitter settings. Then it’s off to the next level—rinse and repeat.

But Twitter Data Dash is unbearably buggy and incredibly unplayable. I’ve tried to play the game on my computer, only to end up getting stuck a couple of times—an experience that, ironically, parallels my experience on the social media platform itself. Playing it on my mobile phone makes the game run a little smoother—yes, I’m very dedicated to my job—but there are still invisible walls to run into, gaps in the ground that will take more than just a few taps of the jump button to get out of, and massive walls that are impossible to scale. Then there’s Data’s jumping ability, which is rather jerky, uneven, and awful to use. I eventually gave up and went straight to the fourth level from the main menu, which is surprisingly finishable—until the game’s final boss stage (I can’t believe there’s a boss stage). Turns out that was a massive troll throwing icons of servers at my head. 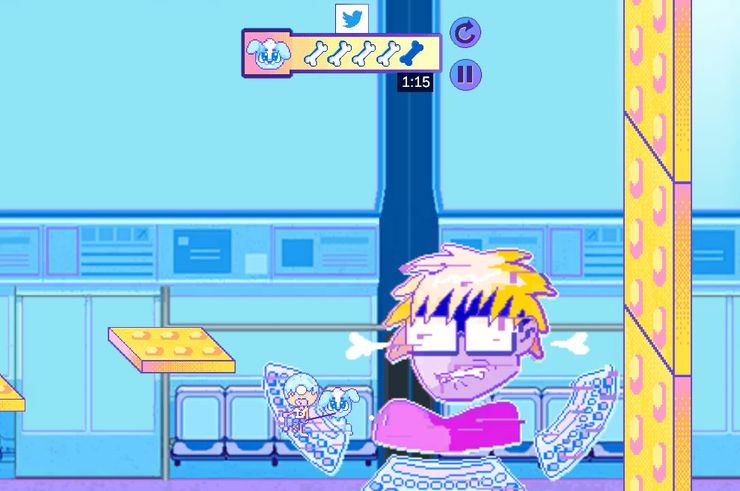 This boss fight is an exercise in frustration. These servers were being flung way too quickly for me to dodge, and I had no idea how to end the boss fight for a few good minutes. It was only after I accidentally fell into the troll’s head that I realised that they look like they are wincing in pain, which gave me a clue as to how to finish the damnable level. And after I finished the level, I was able to share my score for bragging rights—on Twitter, of course. Look at it, please:

I guess the point is that if trolls are harassing you, Twitter is suggesting that you can just bounce on their heads and hope for the best—a strategy that, I would say, is somewhat lacking. I certainly didn’t read the final paragraph of text after the boss stage. That said, whatever message Twitter is trying to convey to me is mostly lost in the rising bile of rage surfacing in my throat. Play Twitter Data Dash if you’re deathly bored or have a masochistic streak, but if you genuinely wish to know more about the site’s privacy policy, you’re better off reading their newly revamped privacy page.