Eurovision has been weird for the past couple of years. I mean, it’s always been weird – it’s Eurovision – but in my opinion it made a mess of how it handled the coronavirus pandemic. If there was any show that could handle a remote production, surely it would be one that has relied on Zoom calls from national celebrities across the continent for decades? Sure, there would be a lot of work in getting the acts to perform via video call as well as the judges, but Eurovision didn’t even try. Instead, it cancelled the 2020 contest.

The same acts who worked so hard to get to the 2020 contest performed in 2021, but due to strict Eurovision rules about entering the same song twice, they could not perform the songs they qualified with the previous year. The fact that the European Broadcasting Union (EBU) could not bend the rules due to the minor extenuating circumstances of a global pandemic meant that we were robbed of seeing Daði Freyr perform Think About Things live on the Eurovision stage. The combination of great vibes, a banging song, and matching jumpers with embroidered pixel art self-portraits would have all but guaranteed Iceland its first Eurovision trophy. I’m not (that) biased, either, he came first in six of the unofficial broadcasts that some countries showed in Eurovision’s stead.

As it turned out, Daði Freyr did not perform live in 2021 either, because one member of his band Gagnamagnið tested positive for Covid, and despite negative test results for everyone else, they stepped down in solidarity. If one member couldn’t live their dream, none of them would. A video of their rehearsal was shown instead, and their song 10 Years still managed to secure fourth place in the overall leaderboard. But I’m not here to talk about Eurovision, not really. I’ve managed to coerce you into reading three paragraphs about the greatest annual musical spectacle to grace our televisions, but I know when your patience is wearing thin. “Get to the games!” you cry. I’m getting there.

You see, Daði Freyr went viral with Think About Things; it was a TikTok sensation and launched the long-haired DJ to niche international stardom. What followed were virtual concerts where he covered Eurovision classics from Verka Serduchka, to Fuego, to JaJa Ding Dong (covers here, here, and here), new original singles, remixes from his heroes Hot Chip, a (much delayed) world tour, and a game. There we go.

The game, Think About Aliens!, is almost a continuation of the story that began in the music video for 10 Years, where Gagnamagnið faces off against a kaiju, using their powers of music to best the beast and save Iceland from a terrible fate. The band takes on a lovely pixel art form for the mobile game – what else – and Gagnamagnið flies to outer space in a musical platforming adventure.

The platforming itself is fun. It’s not Celeste-esque groundbreaking and genre-defining stuff, but it’s certainly well designed and thought through. You save different band members as you work your way through the spaceship, each of which has different abilities to help you through the levels. 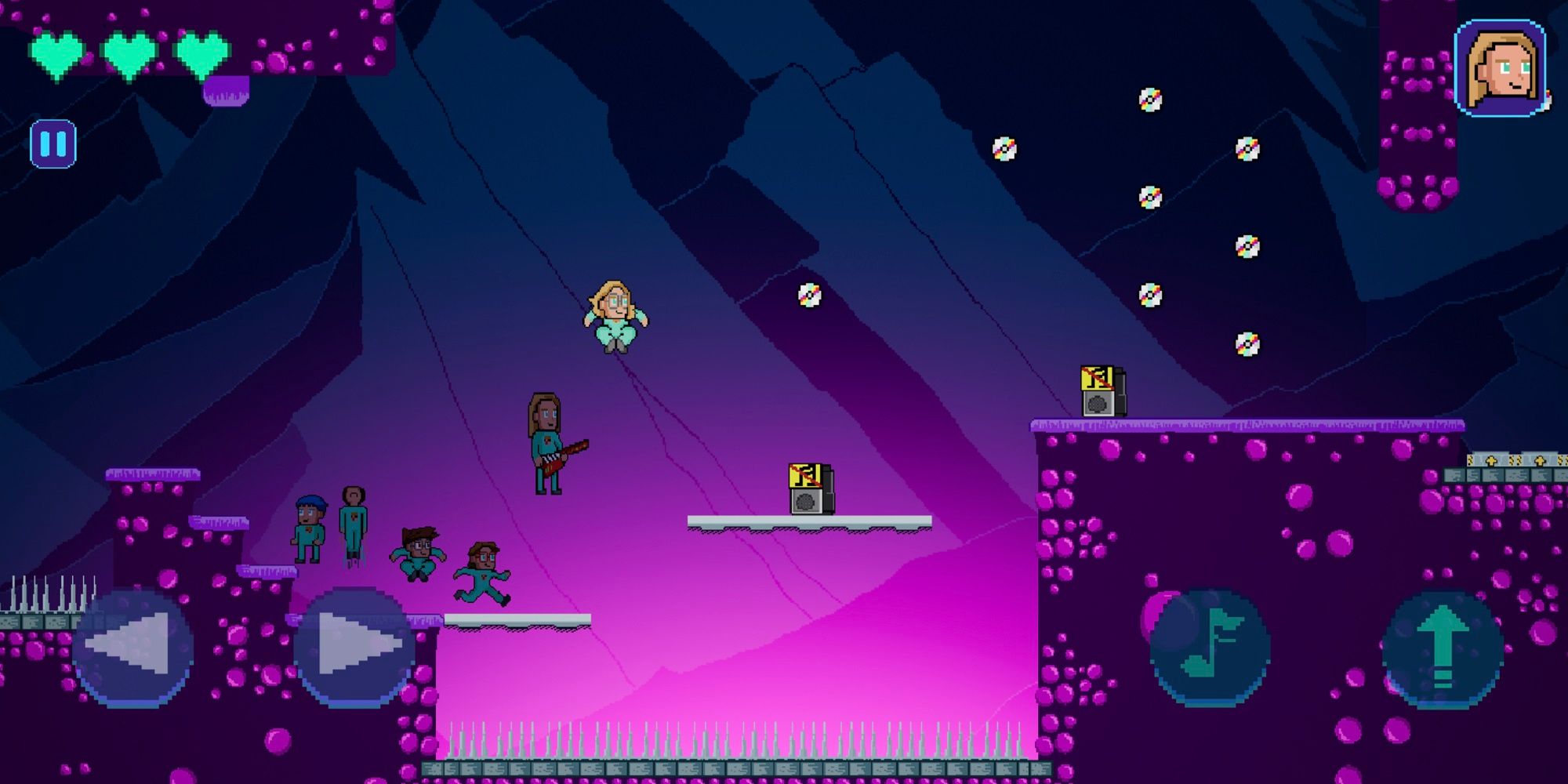 When you face a boss however, everything changes. They come in all manner of hilariously designed alien creatures from George, a crocodilian marketing manager with a saxophone gun, to Yvonne, a bearded octopus who works in Sales. But also the gameplay turns from platformer to a rhythm-based shmup, creating exciting and hectic battles that interrupt the platforming action like Slash shredding a guitar solo halfway through a Mozart recital. It shouldn’t work, but because Think About Aliens! embraces its own absurdity, it kind of does.

The best part of the game, however, is the soundtrack. Obviously. Daði Freyr’s synth pop bangers are the best musical pairing for a video game since Bugsnax got Kero Kero Bonito on board, and you can tell he had fun with it. The soundtrack really comes to a head in the boss fights, where you have to hit the right notes in time with the techno music blasting out of your phone speakers. Avoid the boss’ space-bullets too, of course. It’s high tempo, exciting fun, and creates a far better game than I ever expected. 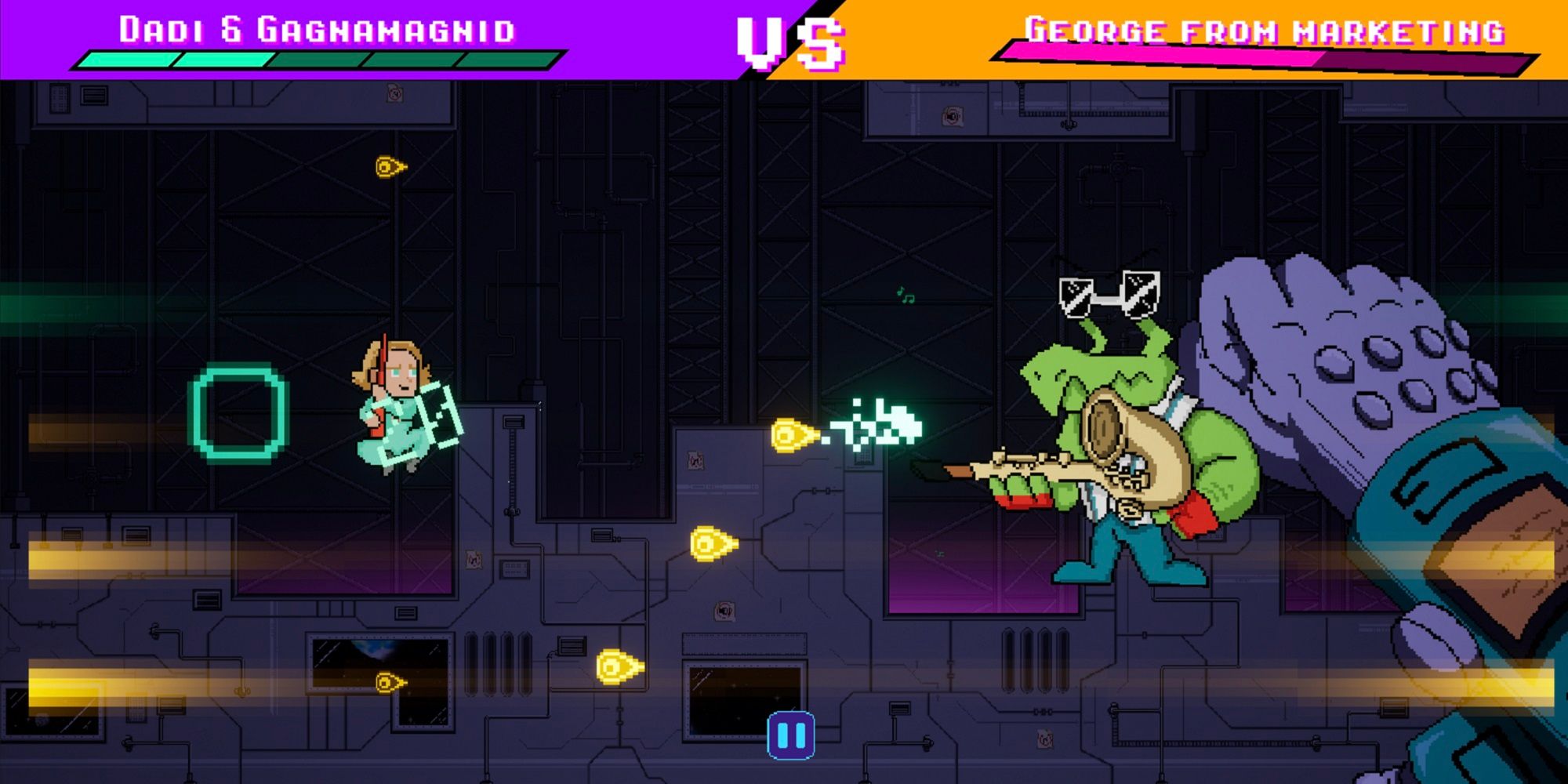 It’s safe to say that I completed the game as soon as it was released. I have the maximum three star rating on every level and I’ve unlocked every collectible, which are perfect nods to Iceland’s greatest Eurovision entries (and also suggest that cosmic interference was often in play to stop them from winning). Now I want you to play it. Embrace Eurovision, find Daði. Have some fun.