It's tough to beat The Last of Us for the sheer elegance of its opening level. Super Mario Bros. might have it beat for the speed with which it gets you into the action, but few games set up their lead character's personality and worldview as efficiently and emotionally as The Last of Us does. We meet Joel, who is overworked and a little terse, but warm, with his daughter Sarah. We watch as the family attempts to escape the outbreak that has hit their town. And we watch as Sarah dies in Joel's arms. It's a baptism by fire.

Then, we fast-forward 20 years. Though the setting is immediately clear and effective, I always find myself straining to understand the details of Tess and Joel's mission to find Robert. I started The Last of Us Part 1on PS5 yesterday and, despite having played each previous iteration of the game, I still had trouble grokking and caring about the stakes of this opening section.

There's a knock at the door and Joel wakes up with a start. He walks across his dingy room to find Tess waiting outside. The scene that follows has to relay a lot: that Tess is Joel's partner, that they work together as smugglers, that she is returning from a job she did without Joel, that her success on this job earned them a "couple of months" worth of ration cards. It also has to tell us that on her way back she got jumped by two people, that she believes those people work for Robert, that she and Joel have been tracking Robert, and that Robert is currently hiding out in "an old warehouse in Area 5." 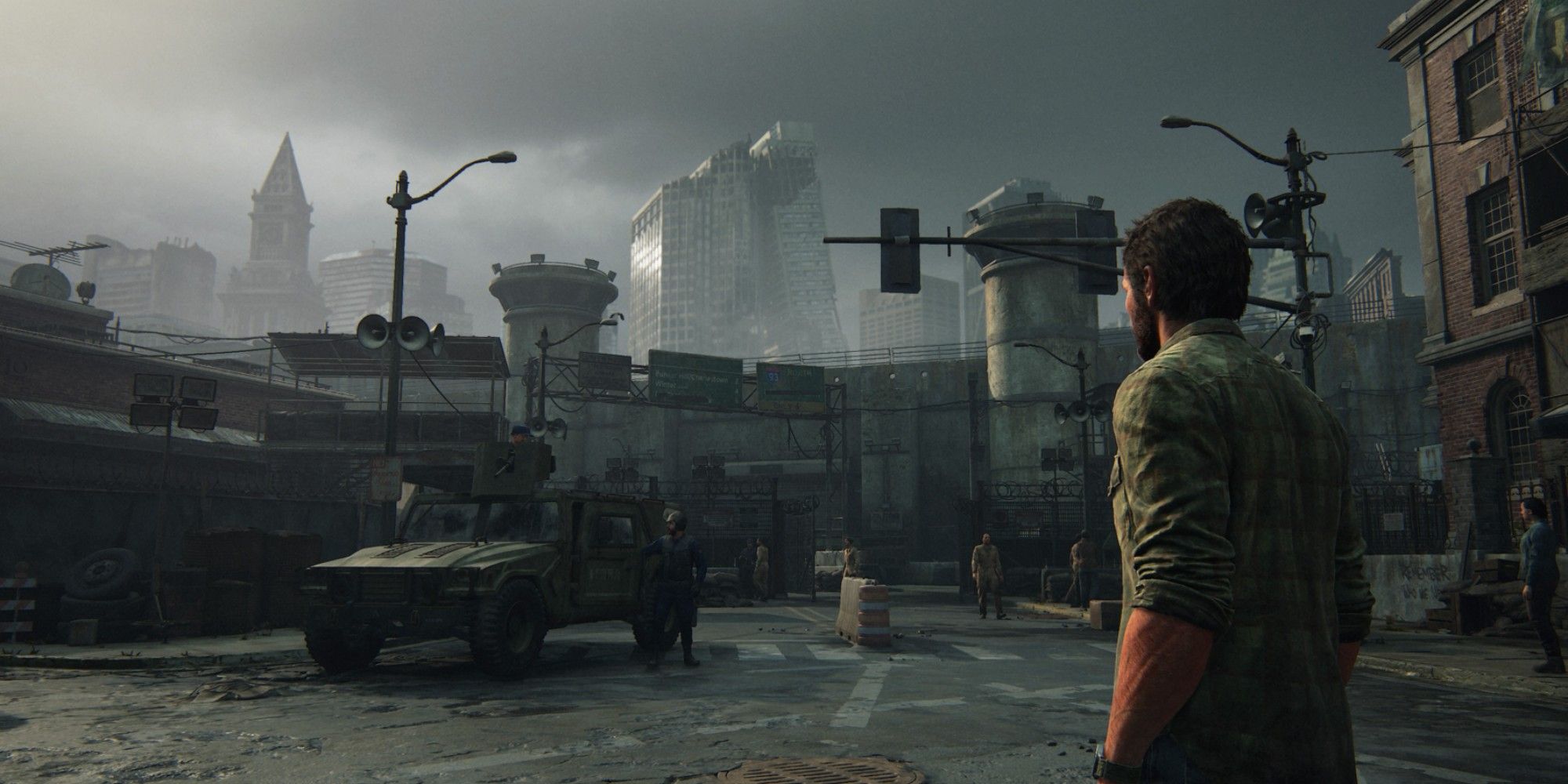 When I condense it down like that, lay it out in paragraph form, it begins to take shape. But, the scene itself has never failed to confuse me when I come across it in the game. It has to introduce us to two characters; one who we've met before but who we know has changed, and one who is completely new to us. It has to convey what their relationship is, and it has to set-up a fairly complex situation. The result is that every line of dialogue in this scene is offering us a new piece of information. It tells us a lot, but it doesn't show nearly enough.

This matters because it’s the mission that drives the first hour of the game after the time jump. Despite considering The Last of Us was one of my favorite games once I finished it, I remember telling a friend that I just didn't like it very much early on. Now, attempting to diagnose what didn't work for me back then, I'm fairly certain the hastily sketched stakes of the Robert mission is the culprit.

It's a bizarre issue, because this isn't a problem the game otherwise has. It introduces us to the Boston quarantine zone by having us walk past soldiers patrolling the streets. We cross paths with people who are talking about getting selected for "outside duty," and to a military checkpoint, where Joel lies about his and Tess' business, saying that he's visiting a friend. Then, abruptly, a truck blows up on the other side of the gate, and automatic weapon fire rings out. Someone shouts "Fireflies!" 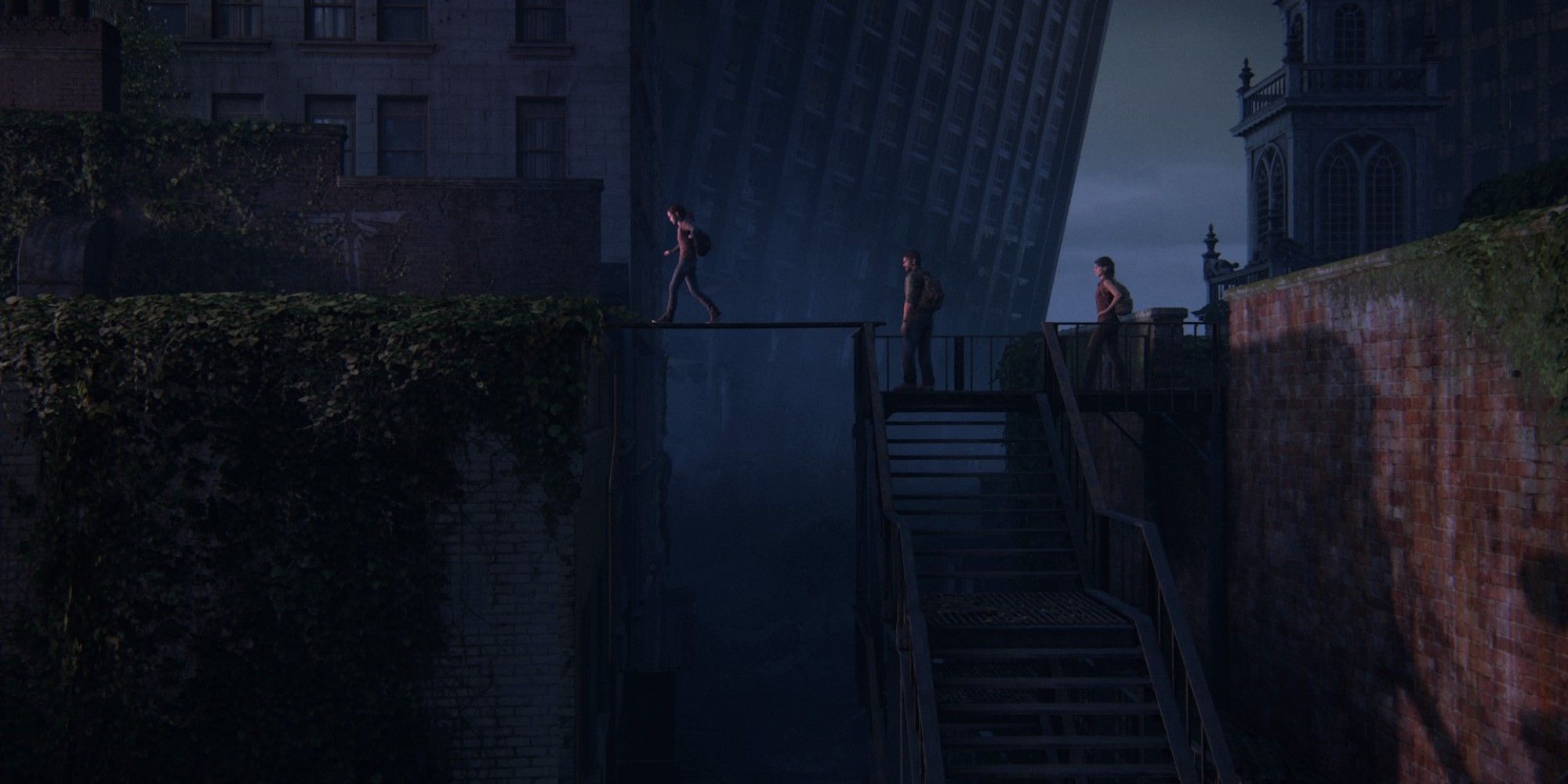 All of this works to paint a clear picture of the world. There are a lot of details, but by relaying them through gameplay, Naughty Dog makes it easy to understand. As Tess and Joel pass through a building to find an alternate route to Robert, a man approaches Tess and tells her that Marlene, the leader of the Fireflies, is also looking for Robert. Because we just heard the word Fireflies twice — when the soldier shouts it and when Joel mutters "Goddamn Fireflies" — we understand the importance of this immediately. As the level plays out, Tess is always the one to talk to people, and everyone she interacts with seems to like her. Meanwhile, people either ignore Joel or bristle at his presence. One guard stops him from passing through a tunnel until Tess calls him off. "Oh, sorry Tess," he responds, "Didn't realize you two were together, go ahead."

But, the game takes much longer to set up Joel and Tess' relationship to Robert. Eventually, Tess asks Joel, "You think Robert's still got our guns?" But, that doesn't happen until a while after their initial conversation about it. That's a miscalculation. As we go, we get an increasingly clear picture of Robert's importance — everyone knows who he is, he's employing a small army of goons — but the game takes a long time to parcel this information out, which means that I spend a solid hour of the game unclear about why I should care. Eventually they find him, torture the information they need out of him, and kill him. Immediately after that, we meet Marlene who takes Joel and Tess to meet Ellie. The game successfully pivots away from this intro to the relationship that it will develop over the rest of its runtime. It gets really good!

It takes longer to get there than I remembered. In this introduction to the post-apocalyptic world that Joel inhabits 20 years after the death of his daughter, we get a strong sense of the city, how Joel and Tess fit into it, and how they relate to each other. But, we only get a weak sketch of the stakes.