Moonlight Canyon is the penultimate level in Kirby And The Forgotten Land's Originull Wasteland. It's hectic from beginning to end, with collapsing blocks, dark tunnels, and a flying escape segment. Like every other level, there are hidden objectives to uncover. Completing these hidden objectives is a huge part of getting 100 percent completion. And this game is very good at hiding those objectives while they're right under the player's nose.

One such objective is in Moonlight Canyon – "Find the treasure hiding by cactus triplets". Most of this level is craggy rock or broken-down girders, hardly a place for cacti to grow. You may think that the cactus triplets are in some super obscure secret room, but they're actually very easy to get to. The trick is noticing them at all, but if you do, this is an easy secret objective to complete. 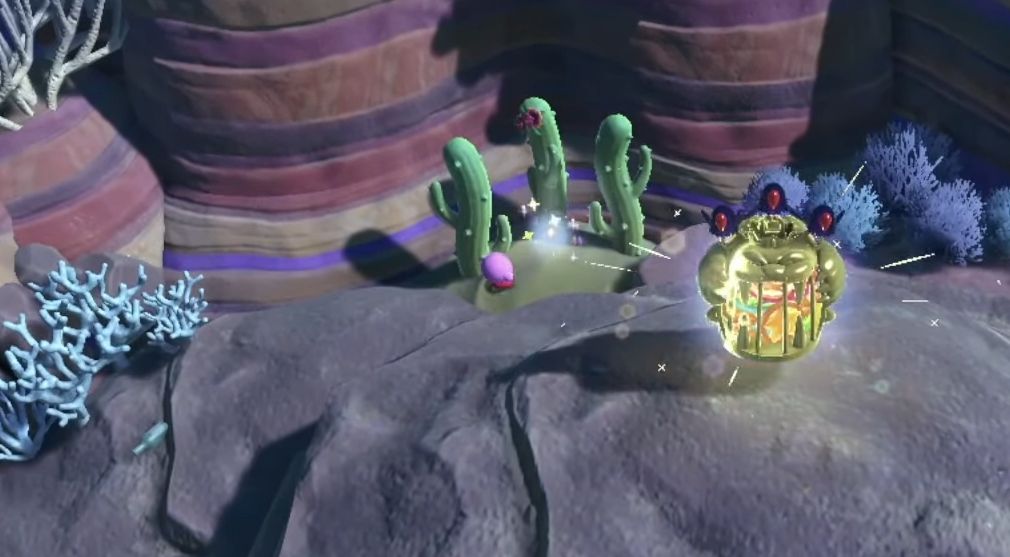 This hidden objective is located at the very end of Moonlight Canyon, after one of the trickiest parts of the stage. Arch Mouthful Mode will turn Kirby into a glider that flies through a dangerous area full of falling objects. Hitting the objects hurts, so you'll have to be agile. The yellow-striped girders fall quickly, while brown rock formations fall slowly.

The best way to find a path is by aiming for red and yellow rings. Many of the rings are blocked by enemies, but a spin attack will get rid of them.

At the end of the stage, you'll see the Waddle Dee cage atop a rock formation, or a pile of coins if you've completed the level before. Touching this will end the level, but don't do that yet. Behind the ending checkpoint is a small patch of sand with three cacti – one of them is wearing a pink bow.

A sparkling patch will appear as Kirby gets close to the triplets, and standing in the middle of them causes a chest to appear off to the right. You don't have to actually open the chest to complete the hidden objective, but there's no reason not to. It contains a decent handful of Star Coins. That's all there is to this one, so go ahead and finish the level.

While you're here, you might as well collect another item in this area. Drop off the ledge where the chest was and look to your immediate left. There are breakable crates underneath the rock formation. Destroy them to uncover a Gotcha Figure capsule. This isn't part of a mission, but it will help you complete your figure collection.

Other Missions In Moonlight Canyon

The cactus triplets objective is the easiest mission in an otherwise chaotic level. There are eleven hidden Waddle Dees in this stage, and you've found four by clearing the level and finding the hidden treasure. Here's a short rundown of every hidden objective in Moonlight Canyon: