Konami’s getting into the mini retro console game early next year with the release of the TurboGrafx-16 mini and its Japanese counterparts, the PC Engine mini and PC Engine CoreGrafx mini. All versions of the tiny console will include 57 games, offering ample nostalgia for those who rooted for the console forced to do battle with the Super NES and Sega Genesis.

And unlike the late ’80s system war of the time, the TurboGrafx-16 mini looks like it will hold its own against the likes of the Super NES Classic and Sega Genesis Mini.

The TurboGrafx-16 Mini and PC Engine Mini are playable at Tokyo Game Show this week, and the system looks incredibly promising, in no small part thanks to the high quality emulation from developer M2. The system itself feels accurate to the era; the TurboGrafx-16 mini controllers feel light and comfortable, just like the original, based on my hands-on time with the system. The TG-16 is big for a “mini” console, and not nearly as aesthetically pleasing as the PC Engine version.

The retro console’s interface is straightforward. There’s a list of games that I can scroll through horizontally, and I can rearrange their order by title and release date. A series of options, like language, display settings, background wallpapers, and more, is available by pressing down on the d-pad and entering a cleanly laid out menu.

In terms of display settings, the TurboGrafx-16 mini — the version I played primarily — offers a clean, pixel-perfect aspect ratio, as well as zoomed and full-screen (stretched) display options. You can even force the display to look like a TurboExpress/PC Engine GT, the handheld version of the console, and the appearance is accurately painful to look at. I tried to play Space Harrier this way, briefly, but could only tolerate it for less than a minute. It’s a fantastic, welcome, and horrible-on-the-eyes option. 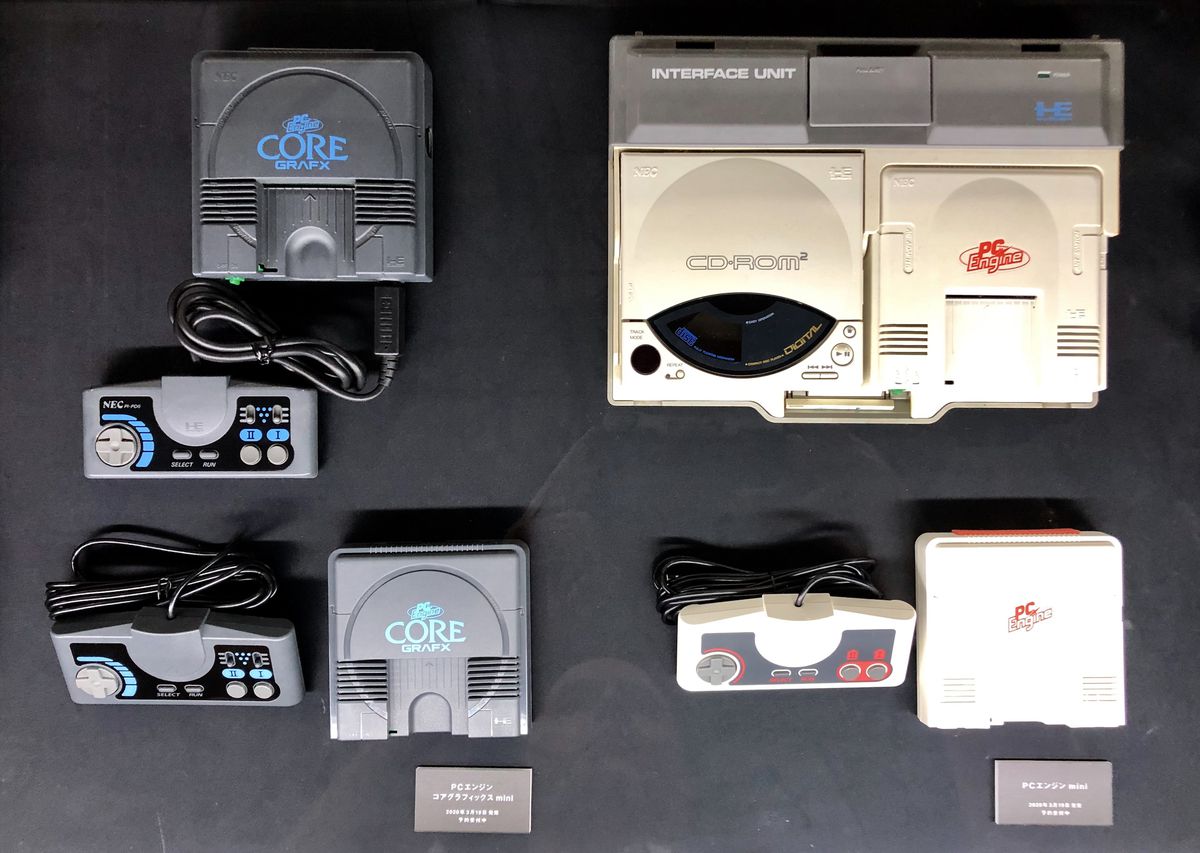 The 57 games included on the system are split into English-language TurboGrafx-16 titles and Japanese-language PC Engine titles. To switch between the two systems and their respective libraries, there’s a small icon of in the bottom right corner of the UI. Flip it from TurboGrafx-16 to PC Engine, or vice versa, and the screen will virtually “reset,” a cute effect that makes it look like you’ve turned off an old CRT television and booted up another console. Changing between the two systems is very quick — a couple seconds at most.

Picking a title offers a satisfying little animation, in which a HuCard, the system’s distinct credit card-sized cartridges, is inserted into the system onscreen. For CD-based titles, a disc spins up in the CD-ROM drive. It’s all very charming.

I played a handful of titles (Ninja Spirit, Splatterhouse, Bonk’s Revenge, Gradius) in English, and attempted only one, Hideo Kojima’s cyberpunk graphic adventure game Snatcher, in Japanese. While the promise of games like Snatcher and other PC Engine games being playable on the TurboGrafx-16 mini is exciting, the reality is that I’ll never actually play that game until I learn the language. That only slightly diminishes the appeal of a system that has plenty of good games on it and plays them accurately.

Speaking with assistant game director Jun Yoshimuro, who worked to secure the games for the TurboGrafx-16/PC Engine mini, he said that the company collaborated closely with some of the original game developers on these 30-year-old games to ensure their authenticity. In part, Konami reached out to veteran game makers to properly license everything for the system, but Yoshimuro told Polygon that the company also contracted those developers to play test the emulation for accuracy.