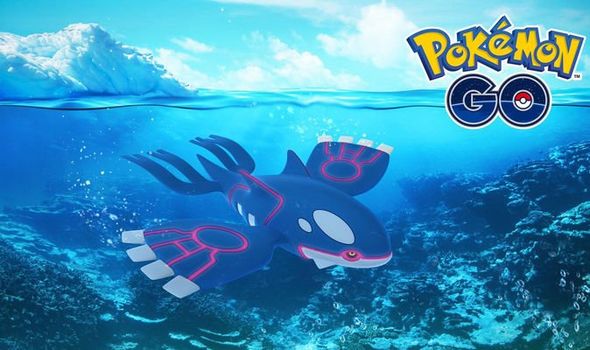 Pokemon Go Trainers can take on the difficult Kyogre Raids this week, thanks to a new update from Niantic.

As part of an ongoing Gym rotation, Trainers can now battle the Legendary Pokemon over the coming week.

And the big news is that fans will have another chance at grabbing a special Shiny Kyogre as well.

The Sea Basin Pokémon will be available to battle until June 27, 2019, at around 9pm.

After this, Kyogre will be replaced by Groudon, another hard-hitting Raid Battle which will no doubt prove popular with fans.

As many Trainers will already know, Kyogre can be a tough customer to battle, especially if it has positive weather effects boosting its stats.

But if you have a good group of Trainers brought together for the Pokemon Go Raid, a new shiny could be yours.

Having first made its appearance in February 2018, Trainers have learnt that Kyogre is weak only against Electric- and Grass-type attacks.

The Waterfall Water-type fast attack can be a pain to manage and its Charged Attack varies between Electric-type Thunder, Ice-type Blizzard, or Water-type Hydro Pump.

The Pokemon Company suggests adding Roserade, Magnezone, and Electivire to your battling team for this Kyogre encounter.

“Raikou will be the most effective Electric-type Pokémon by far, with Zapdos and Jolteon trailing afterward,” a guide from the Pokemon Company reads.

“Add Magneton, Ampharos, and other Electric-type Pokémon to your party only once you’ve exhausted these.

“If you’ve already spent the time to train up a Sceptile, it’ll pay dividends here. Most Trainers will need to rely on Exeggutor or Venusaur instead, with Meganium, Tangela, and Victreebel standing out as the best alternatives.

“Whichever Grass-type Pokémon you use, make sure they know Grass-type attacks—none of these Pokémon are optimal choices solely for their stats.”

There is no guarantee that the Kyogre you encounter will be a shiny one, making it a pretty lucky to run into one.

Trainers getting ready for the new encounter add: “Someone has to enter the raid and find out. Ditto helps so you don’t have to wait for it to fire one off.

“It seems there’s a lot of people that don’t know the auto-select algorithm got updated and no longer chooses based on survivability.

“You can no longer deduce raid boss charge move based on the suggested team.”

Another adds: “While everyone is coordinating whether they want teams or whatnot, you have one person go in alone and finds out.

“Others start the clock so by the the time the sacrificial lamb gets exits, they don’t have a large wait lobby and can easily swipe to the correct pre-created team.”