Move over Tesla. The Lightyear One will be a solar-powered electric vehicle that can drive 440 miles on a single charge.

I missed the Dutch company when I visited CES 2020, the big tech trade show in Las Vegas earlier this month. But the team was kind enough to transport the car to my house in Silicon Valley, where I got to sit in the prototype.

We couldn’t drive it because the Helmond, Netherlands-based Lightyear team doesn’t yet have permits to drive the car on American streets. But the solar-powered family car is quite futuristic. It felt like I was stepping into a futuristic car at Disney’s Epcot Center in Florida. 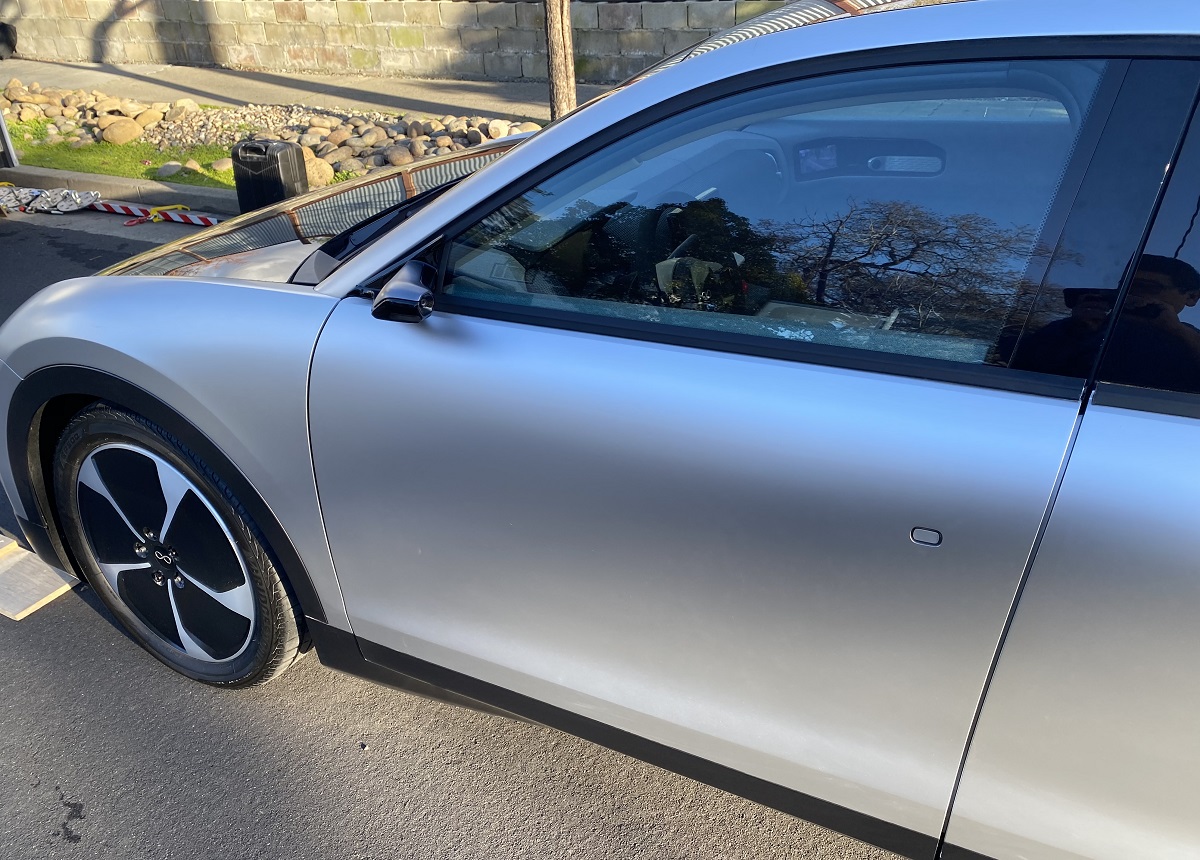 Above: You press a small button to open a door on the Lightyear One.

Solar-powered cars seem like a fantasy, as even electric car companies like Tesla aren’t building them yet. But the founders are optimistic that they can match what gas-powered and electric vehicles can do.

And change is happening. Bloomberg NEF reported that it took around five years to sell the first million electric cars and just a year and a half to shift the second million. After the 3 million milestone, it took only six months to pass 4 million electric vehicles sold at the end of 2018.

Perhaps the coolest thing about the car is the fact that the solar tiles cover the whole car, from front to back, across a curved roof. But the scariest thing is that the tiles also cover the space where you would normally have a back window. So you can’t turn your head and see through a window in the back. 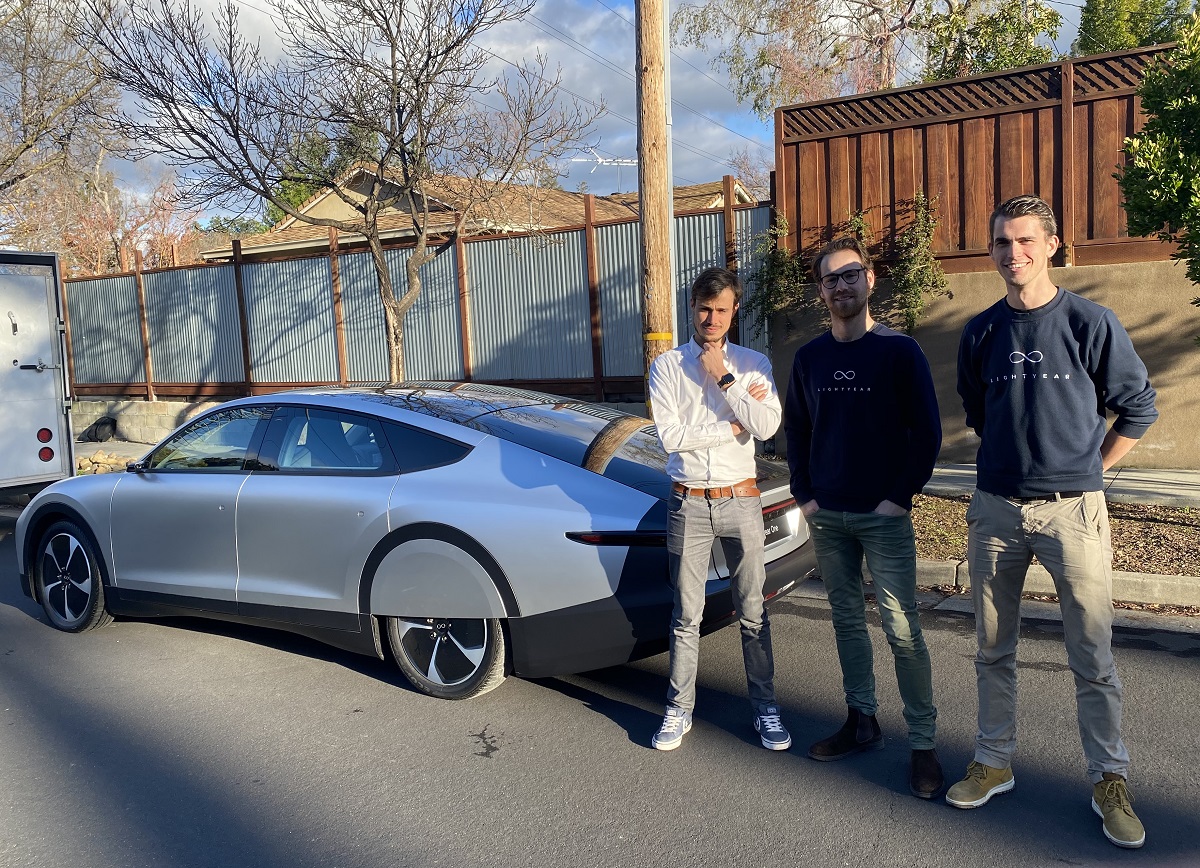 Arjo van der Ham, chief technology officer of Lightyear, said in an interview with VentureBeat that this is OK. I was looking at him skeptically while he said that.

He said you can actually see behind your car with two side mirror cameras that show up on displays near your door handles. The company will also install a center rearview mirror that is a camera view of what is behind your car, and it will also install side mirrors as well. The cameras can also use artificial intelligence to recognize risks such as a car coming up alongside your blind spot, and so the cameras can give you visual alerts. 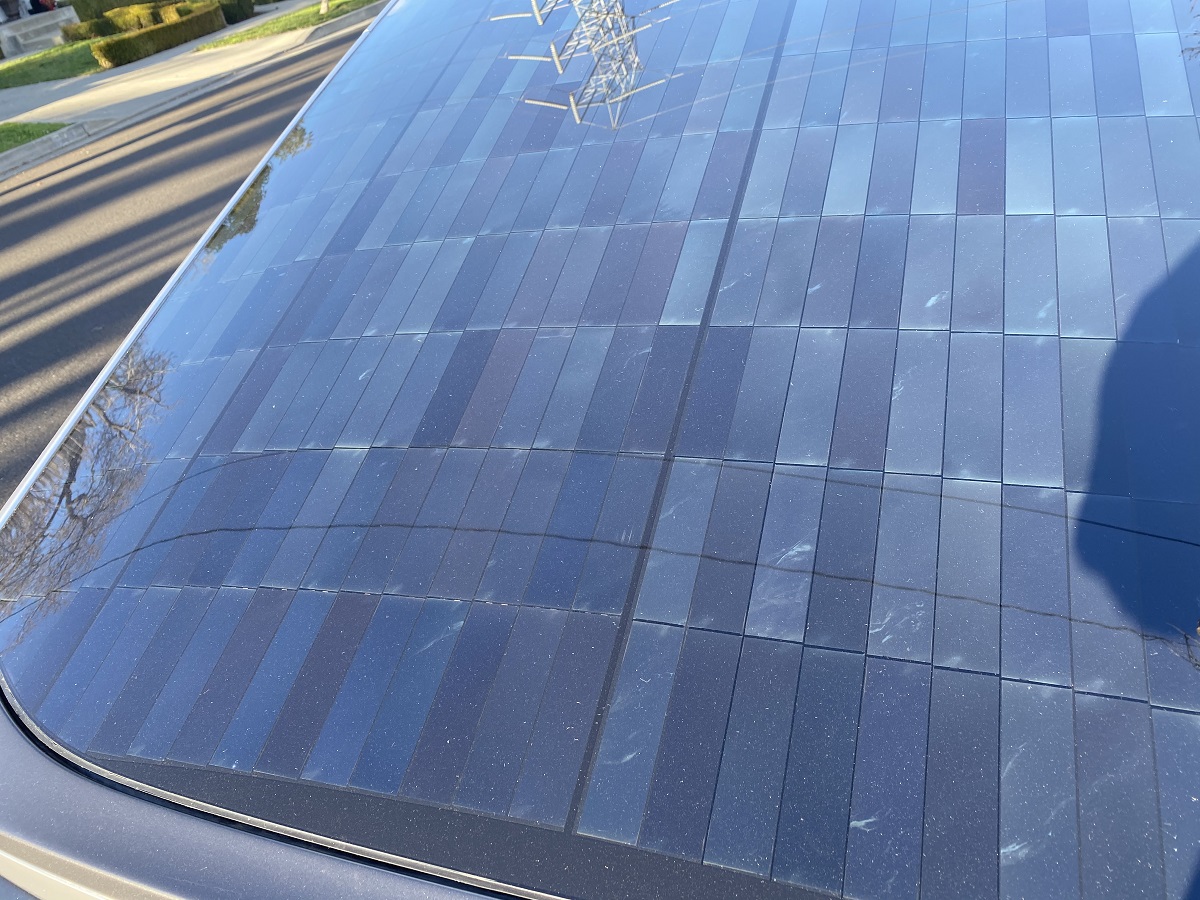 Above: There are 1,000 rectangular solar tiles on the Lightyear One.

Lightyear CEO and cofounder Lex Hoefsloot, said in an interview said the car’s electronics are all moved to the front of the car. But the car actually has four engines, one for each wheel.

“That means it can react very quickly to changes in driving, and with no motor in the middle, we can improve the aerodynamics of the car,” Hoefsloot said.

Across the whole car, there are 1,000 small solar tiles that soak up the sun and convert it to electricity. They are smaller than the tiles on a house roof, as the smaller tiles help the company create the curved roof for the car, said Hoefsloot. The tiles have a slight different color, so you can tell they are tiles up close. But from a distance, it looks like you have an all-black stripe on the car.

The car can pack about five adults and luggage in the trunk that adds up to 780 liters — a pretty sizable space. The car has a 60-kilotwatt-hour battery and charges at a rate of 12 kilometers per hour, but it can also use electric vehicle charging stations, which will get the car up to 507 kilometers range in an hour.

“We are building it for endurance and comfort,” said Hoefsloot. “It’s the first electric car you can really drive without a lot of charging. It’s not necessarily built for zero to 60 miles per hour speed.”

The car can go 100 miles per hour, and it goes from zero to 60 in eight seconds.

During a four-hour drive, the Lightyear One should accumulate nearly 50 kilometers’ worth of extra travel time from the solar charging. The chassis is made out of aluminum, a lighter material.

The company plans to make about 946 of these initial exclusive cars in the Netherlands starting in 2021, and then it will progress to larger volumes, working with a contract manufacturer in Europe. 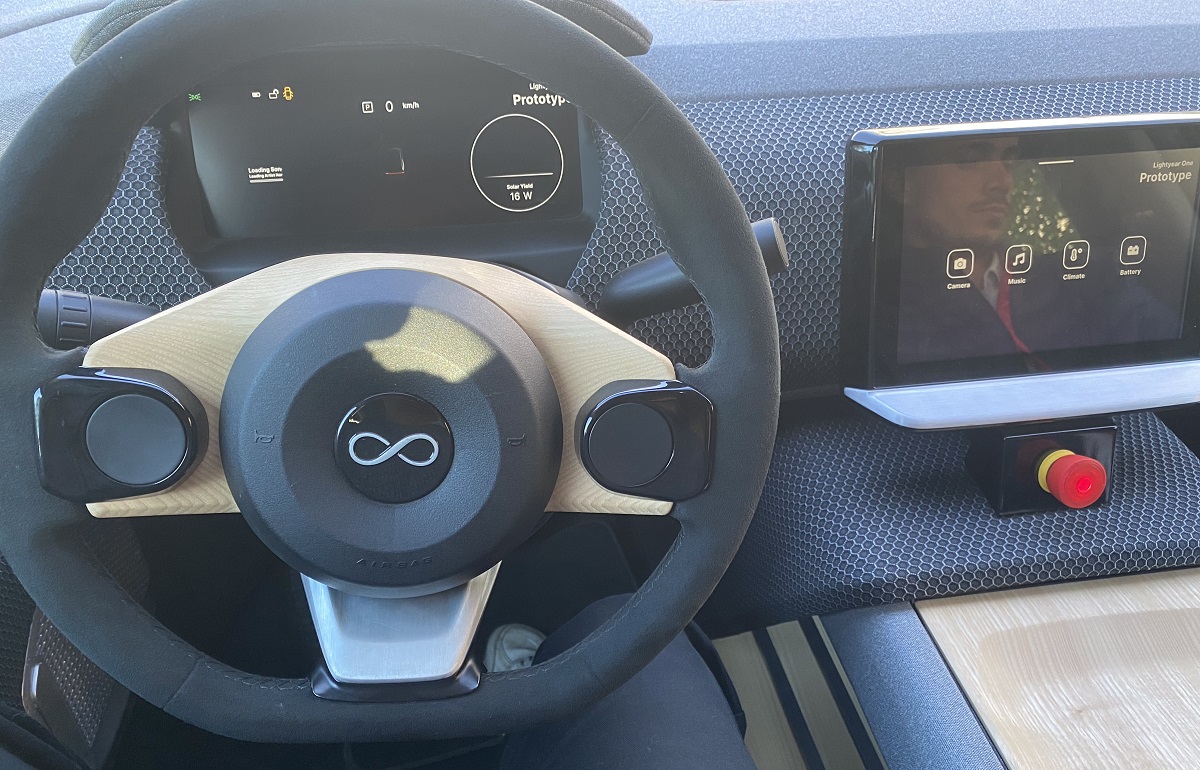 Above: It’s pretty sparse in the interior of the Lightyear One for now.

You press a button on the side of the car to open the door.

The car has a big red button in the middle of the dash area now, but that is a safety stop feature for now. In the future, it won’t be there. It will have a couple of display screens for the dashboard and infotainment display.

The heat is evenly absorbed on the tiles and the car has insulation, so you won’t have to worry about the solar cells producing too much heat, Hoefsloot said.

“This prototype covers the bare minimum functions for now,” he said.

The car is fairly long and so it has good crash protection for the passengers, he said. The inside needs some work, but the company will be redesigning that part in the future. 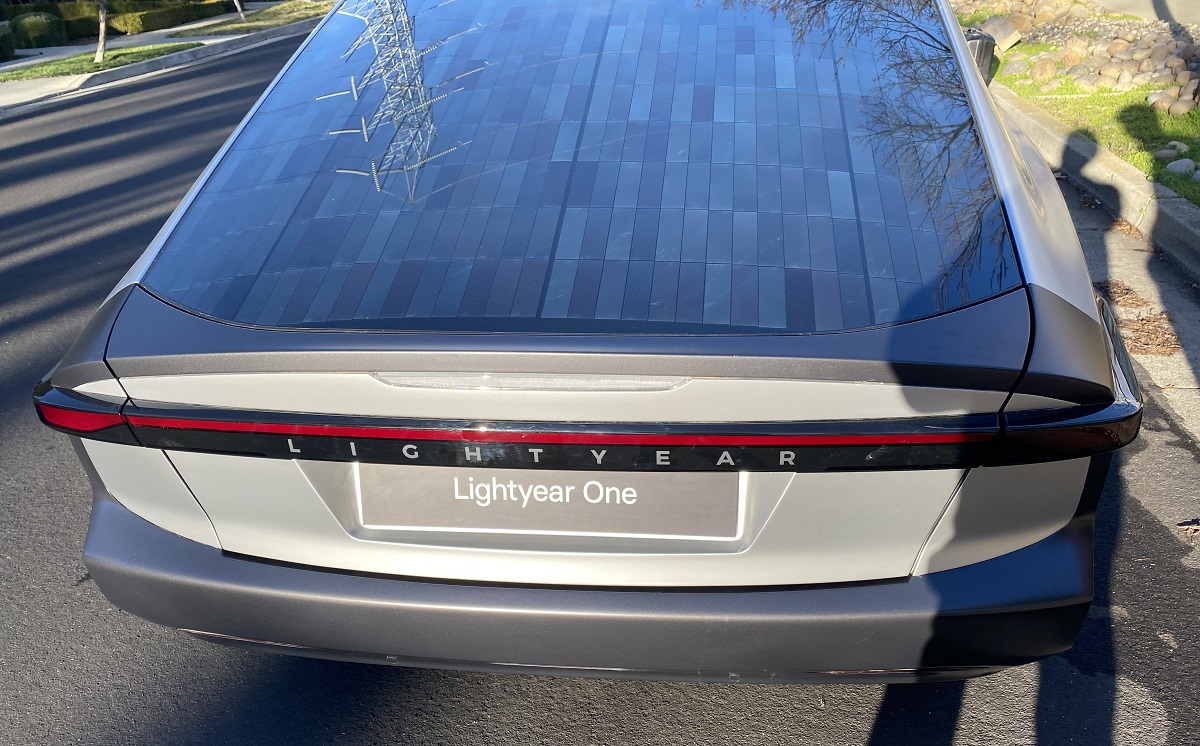 Above: The Lightyear One has curved surfaces for its solar tiles.

The team of five founders got started in 2016, and the demo car is their first that they are starting to show. Future prototypes will be more complete. Van der Ham said the team got into electric car racing in 2012, and they started working on the tech while at the Eindhoven University of Technology. They participated in the World Solar Race in Australia.

“After that, we took our student-built car around the world,” Van der Ham said. “People started asking us when they could buy it. By 2015, we were almost graduated, and so we started the company. We want to do something for the environment. We want to make this world a better place.” 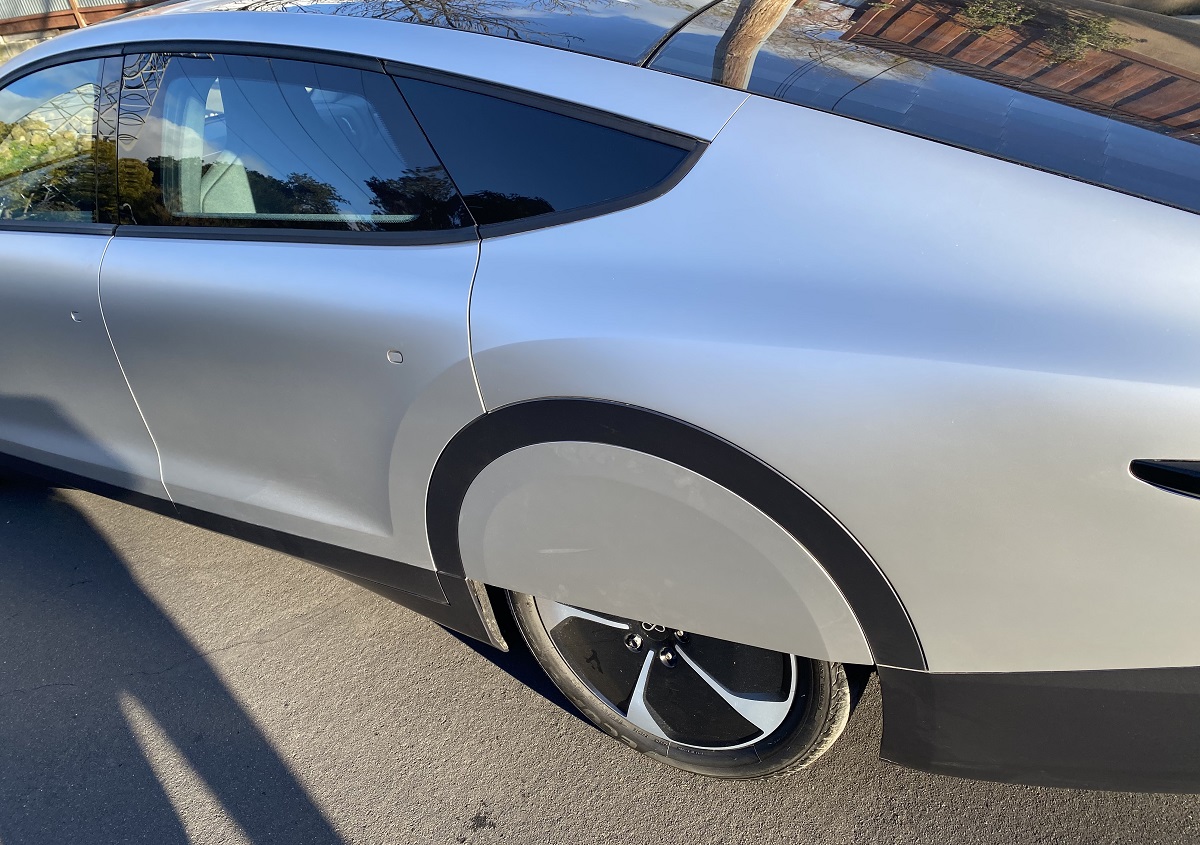 Above: Each tire has its own engine in the Lightyear One.

One of the things that makes a solar car more sustainable is its efficiency. You can get rid of the gas tank and redesign the engine (or engines in this case) so that they are smaller and take up less space, which in turn gives the car more range on a battery charge.

“If you make a relatively small battery for a shorter range, then the costs can go down,” he said. “Smaller batteries are still about a third of the bill of materials and in high volume. The charging hassle becomes a little better. If I have a more efficient car, if I can drive more miles with the same amount of energy, then if I charge at the same charging spot, I’m actually charging faster in terms of miles per hour. So this car is about twice as efficient as a Tesla, for example.”

He added, “If you are at the same charging station, you charge twice as far not because of supercharging but because the car uses less energy.”

If you charge the car at your home, you can put it inside the garage and charge it using your wall charger. But outside, it can charge overnight. In a year, the solar charging can get you about 8,000 miles of no-cost driving. 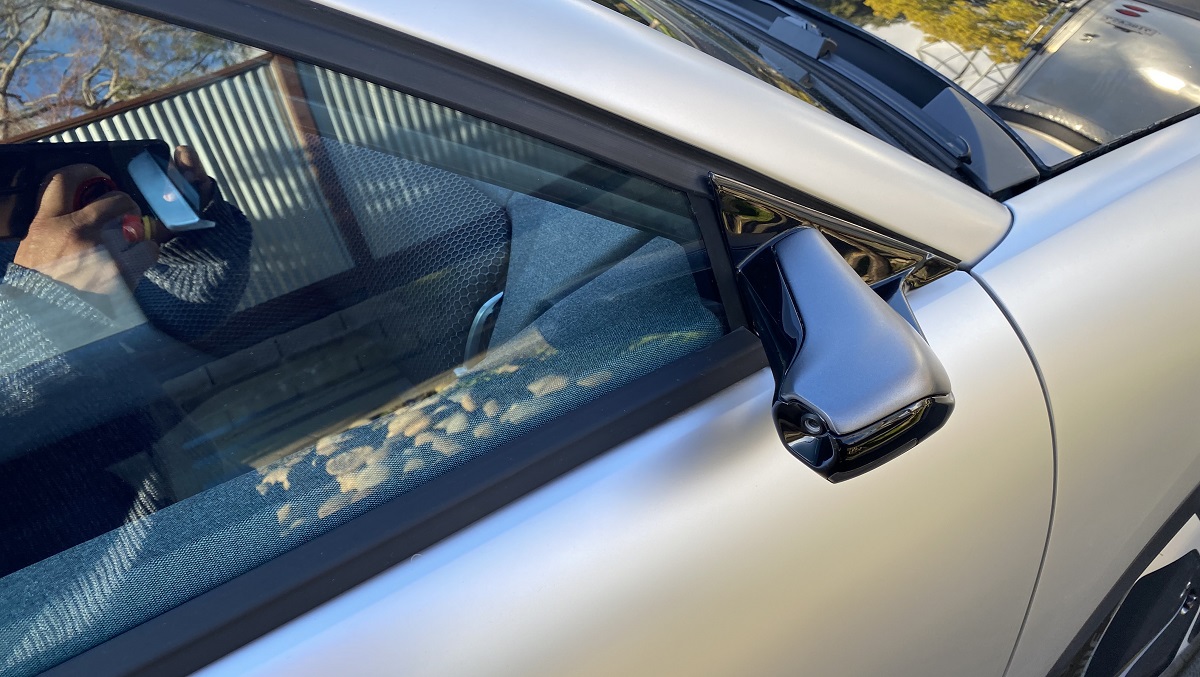 Above: Cameras will help you see behind the Lightyear One.

It’s hard to get enough solar cells on the car to enable enough charging.

“What has been super difficult is having a large surface area of solar cells, making the car very aerodynamic, but also giving people comfortable seating,” Hoefsloot said.

The car has a deep well where you put your feet, and the car is lower to the ground. It’s a very compact car in that respect, for a family car.

“We focus on making a super-efficient car, and we partner with others for the rest,” Hoefsloot said. 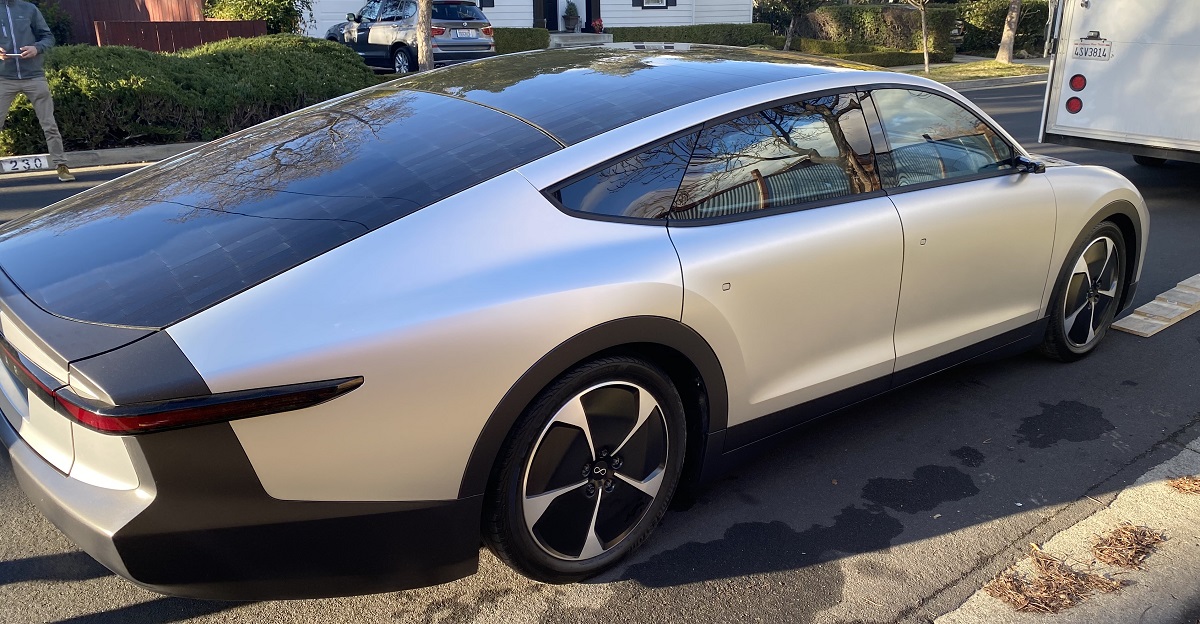 Above: The Lightyear One debuts in late 2021.

Lightyear has raised about $30 million so far, and it is raising more, and it has 120 employees. The company is using more off-the-shelf parts to reduce costs.

Overall, I was pretty impressed with the car’s balancing of practicality and sustainability. In a few years, I’m sure the concept will put even more pressure on car makers to bring cars into the sustainability era.