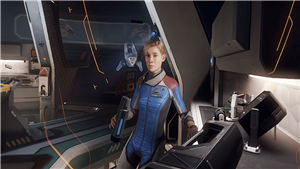 Facebook debuted a new trailer for Lone Echo II a few days out from its release on October 12.

You can check out the epic new trailer embedded above, which features a mix of new footage and some a better looks at sequences we saw peeks of in the gameplay trailer at the Oculus Gaming Showcase earlier this year.

Lone Echo II has been in the works for quite some time now, and will release as the last Oculus Rift exclusive game. Facebook recently stopped selling the Rift PC VR headset and has since doubled down on its commitment to its standalone Oculus Quest platform. The Quest platform has increasingly become Facebook’s platform for exclusives, such as Jurassic World Aftermath and The Climb 2. Even big titles that originally launched as PC VR exclusives, such as Medal of Honor: Above and Beyond, are now also making their way over to Quest 2.

After the initial announcement, developers Ready at Dawn didn’t give much more info until earlier this year, when an August release date was confirmed. However, the release was then delayed at the last minute, with the final October 12 date announced just over two weeks ago.

Will you be picking up Lone Echo II when it launches exclusively on the Oculus Store for Rift on October 12? Let us know in the comments.