In Lost Ark, each continent’s Adventurer's Tome contains varying levels of grind, luck, and more often than not, both. But, in order to reach 100 percent completion for those sweet, sweet Ignea Tokens, many of us find it worth it.

Shushire, being the last continent you go through before being forced to reach a certain item level (460) to progress in the story, is generally a good place to stop and smell the roses (however frozen they may be up there) and get to work on some of those collectibles. The cooking section in Shushire’s Adventurer’s Tome is seven items long, much like the rest of the continents, and thankfully, is not all too complex. Now, even though your overlay minimap is probably already open pretty much all the time, be sure to keep it so for convenience when hunting these ingredients down. 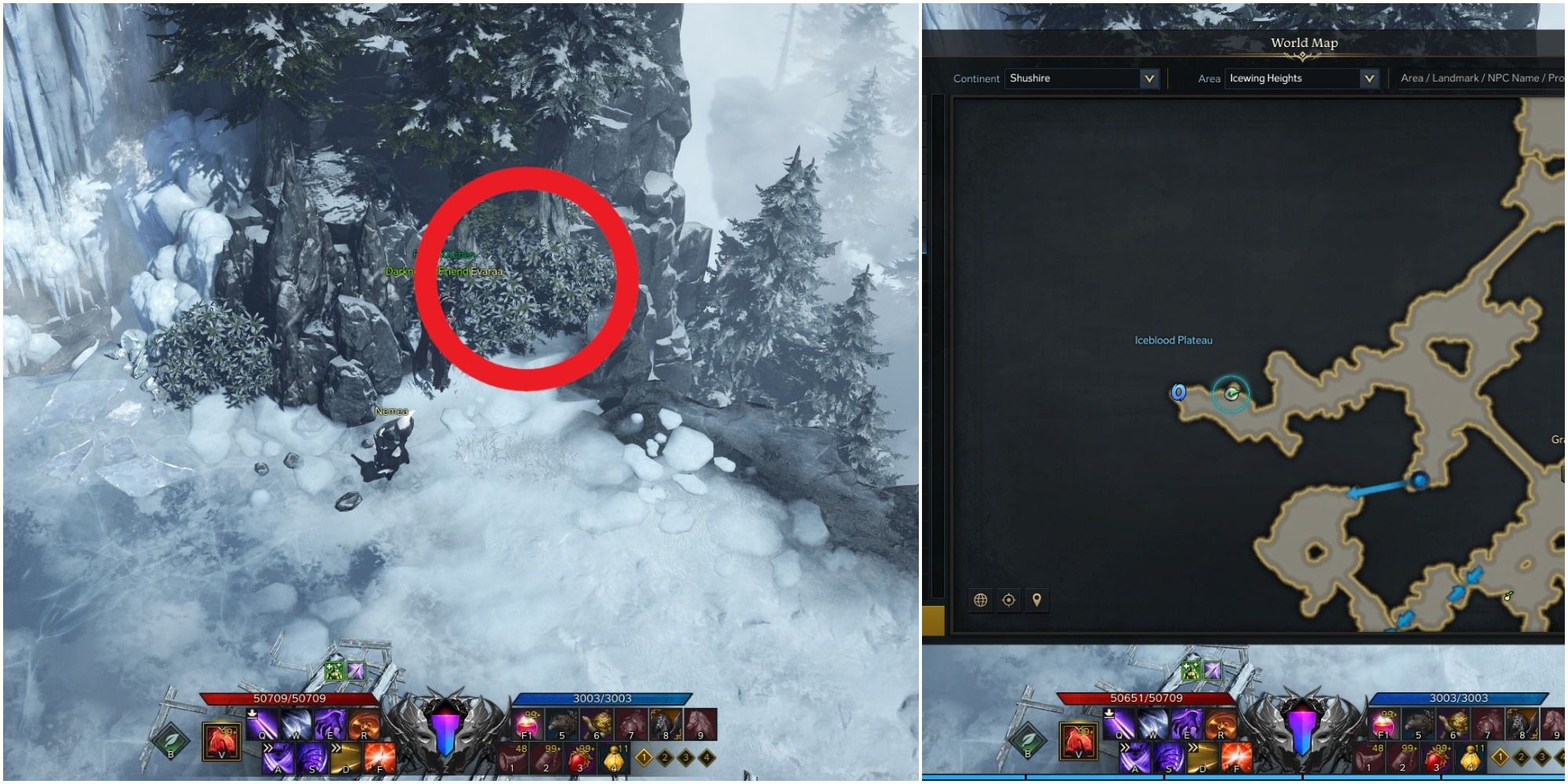 For the Frozen Butterfly Larva, there are no real extra steps here other than picking it up and consuming it for Adventurer’s Tome credit. This cooking collectible can be found in Icewing Heights, quite near the entrance to Iceblood Plateau.

It is obnoxiously obscured by a bush, and on top of that, an Icewing (those big moths with annoying ranged attacks) spawns right next to said bush. So, while it’s a good indicator as to which bush the Frozen Butterfly Larva is in, be sure to kill it so it doesn’t interrupt you while picking it up. 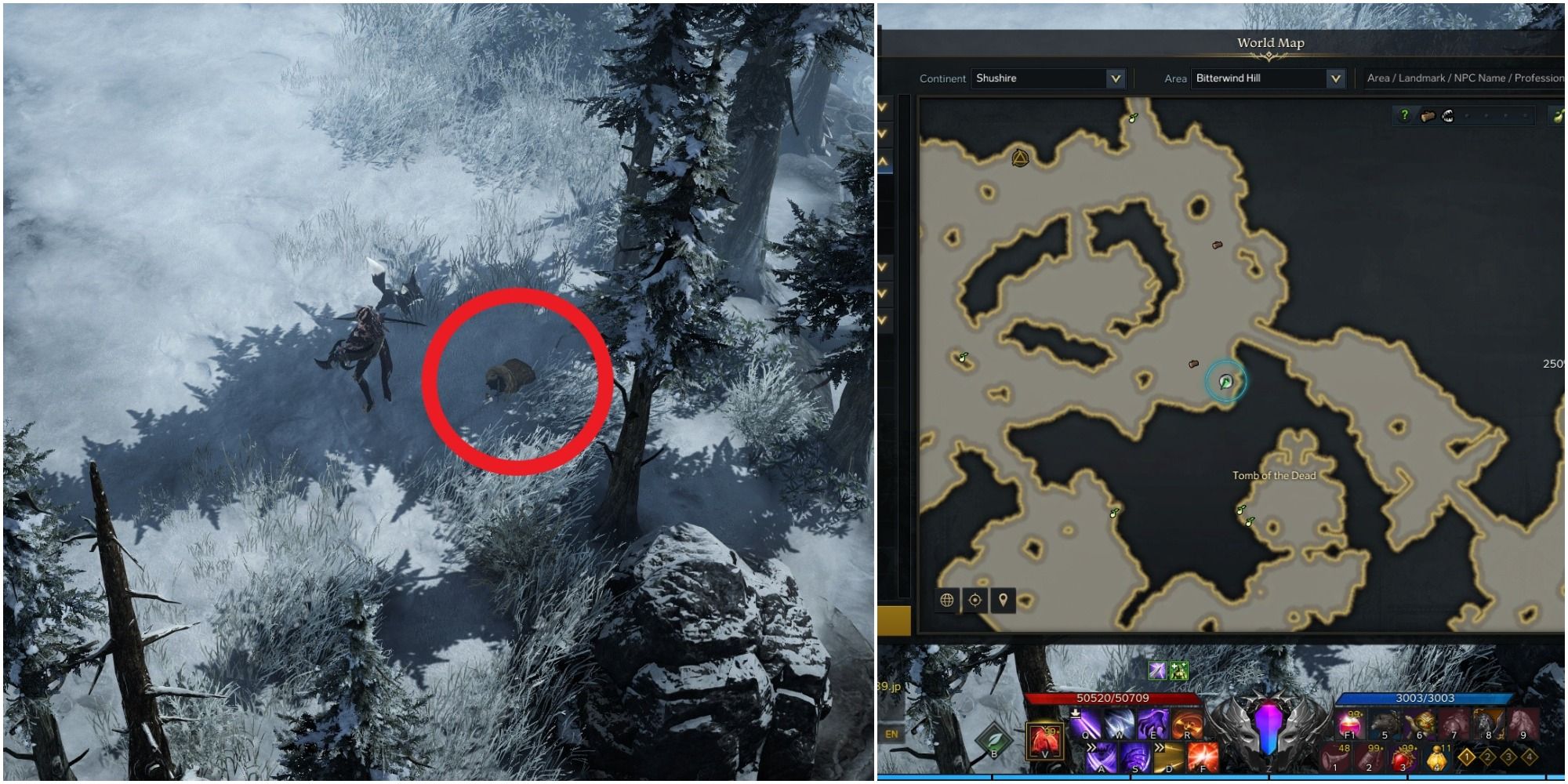 Surprisingly, you don’t get Wolf Meat by killing a bunch of wolves and hoping for an RNG drop. Instead (and refreshingly so), it’s another simple cooking collectible that you can just pick up and consume on the spot for credit.

It’s in an interactable brown bag in Bitterwind Hill, and there are a couple of mobs there (Bitterwind Largefangs) that you’ll have to kill to avoid getting interrupted while picking up the Wolf Meat. 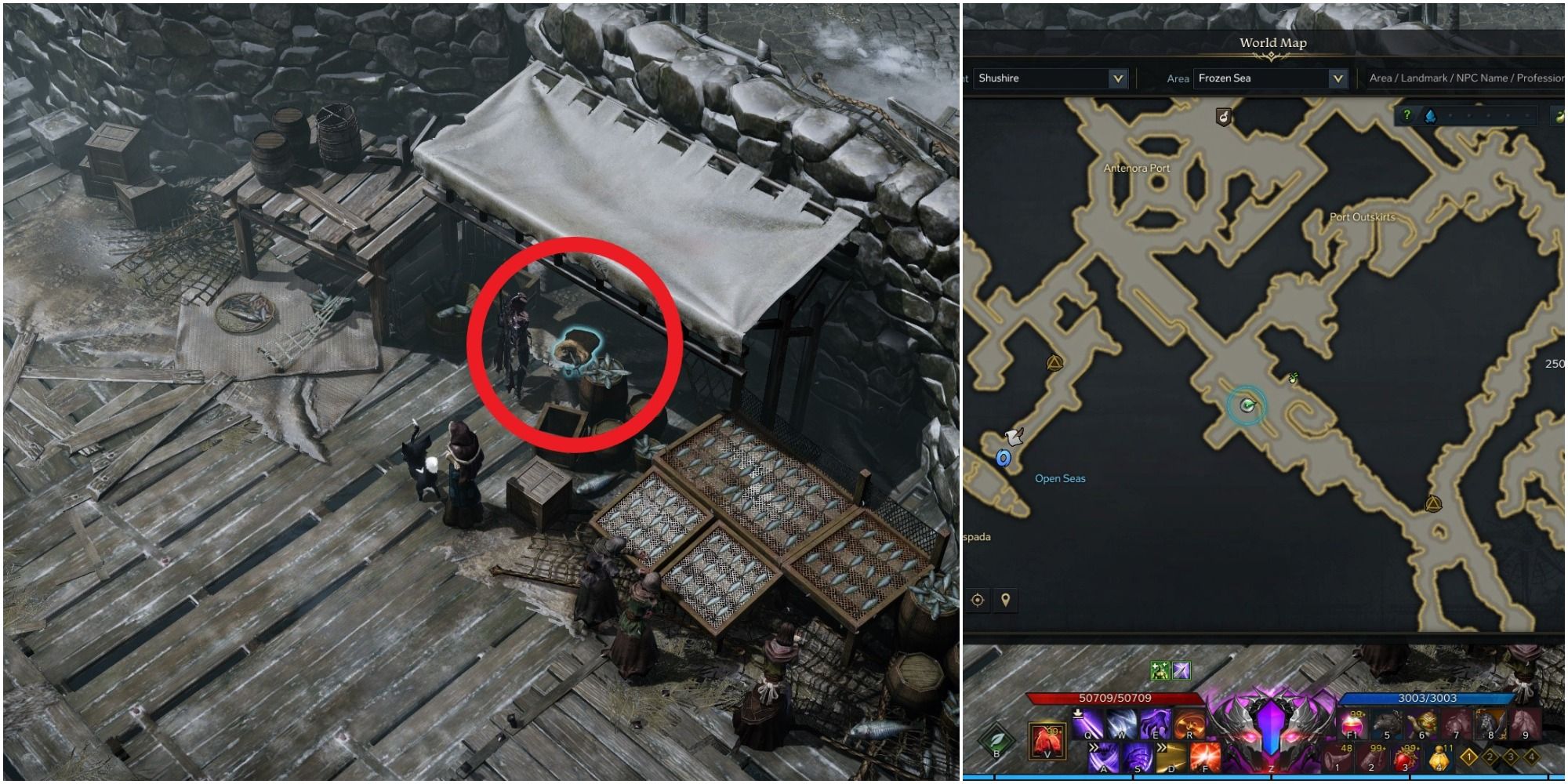 Old Canned Food (which somehow got an Amalone four star rating) is yet another easy "pick up and consume" for cooking collectible credit.

This one is found in Frozen Sea (the port-zone of Shushire) and is yet in another interactable bag, though it is slightly obscured by the shadow of the tent it is underneath. It also happens to be next to a barrel with a bunch of fish lying on top of it. 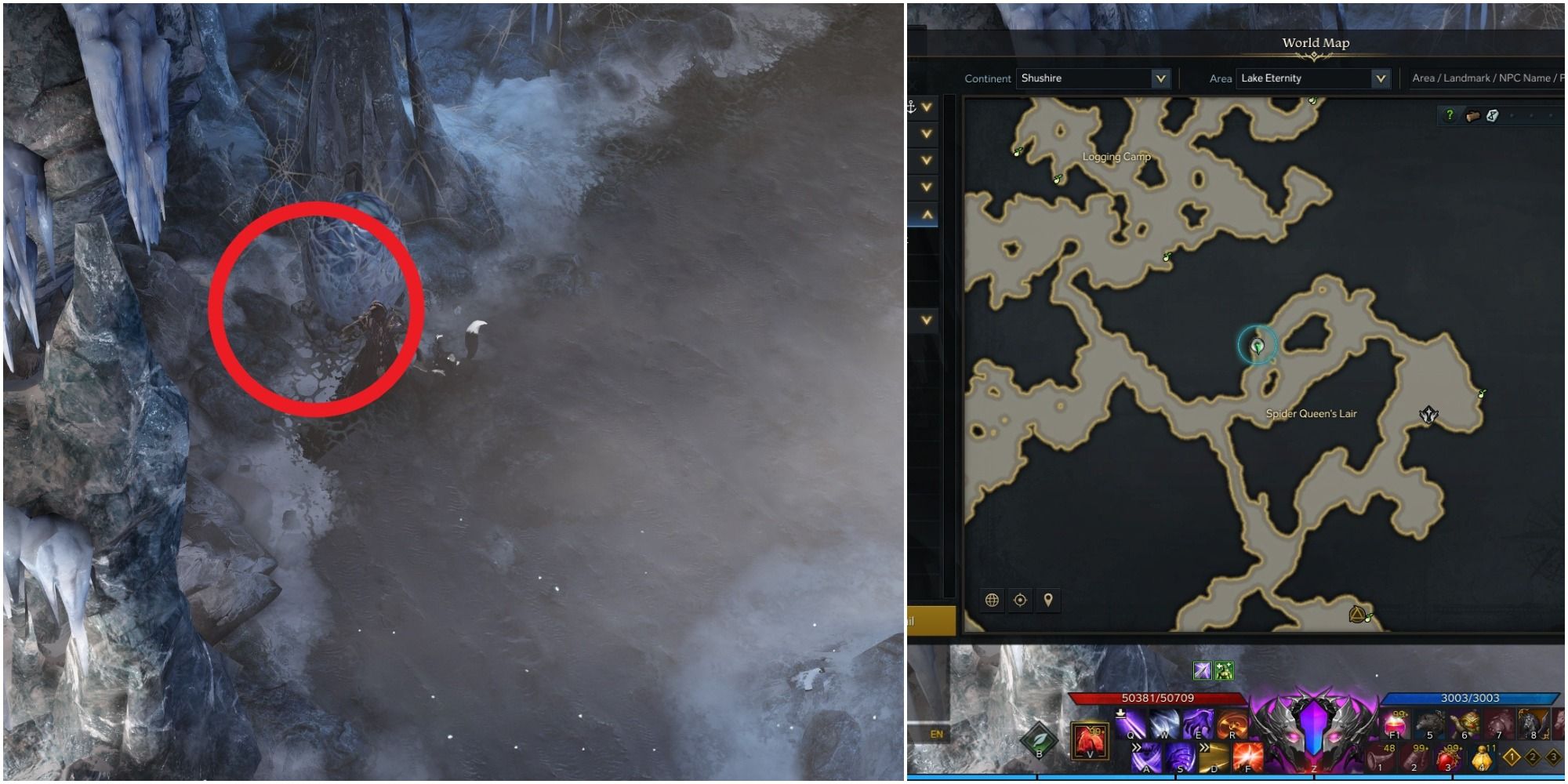 Fear not: this is not an RNG drop from field boss Tarsila, though it is located in her lair nearby, which is in Lake Eternity. Rather, it is, once again, an easy "pick up and consume" cooking collectible. It can be interacted with just to the left of the large egg.

Do be wary of the Small Cave Spiders on top of the ingredient’s location. They have relatively quick spawn timers that can easily ruin your day if you’re not fast. So, be sure to pick the egg up right after killing them, else you run the risk of getting interrupted. 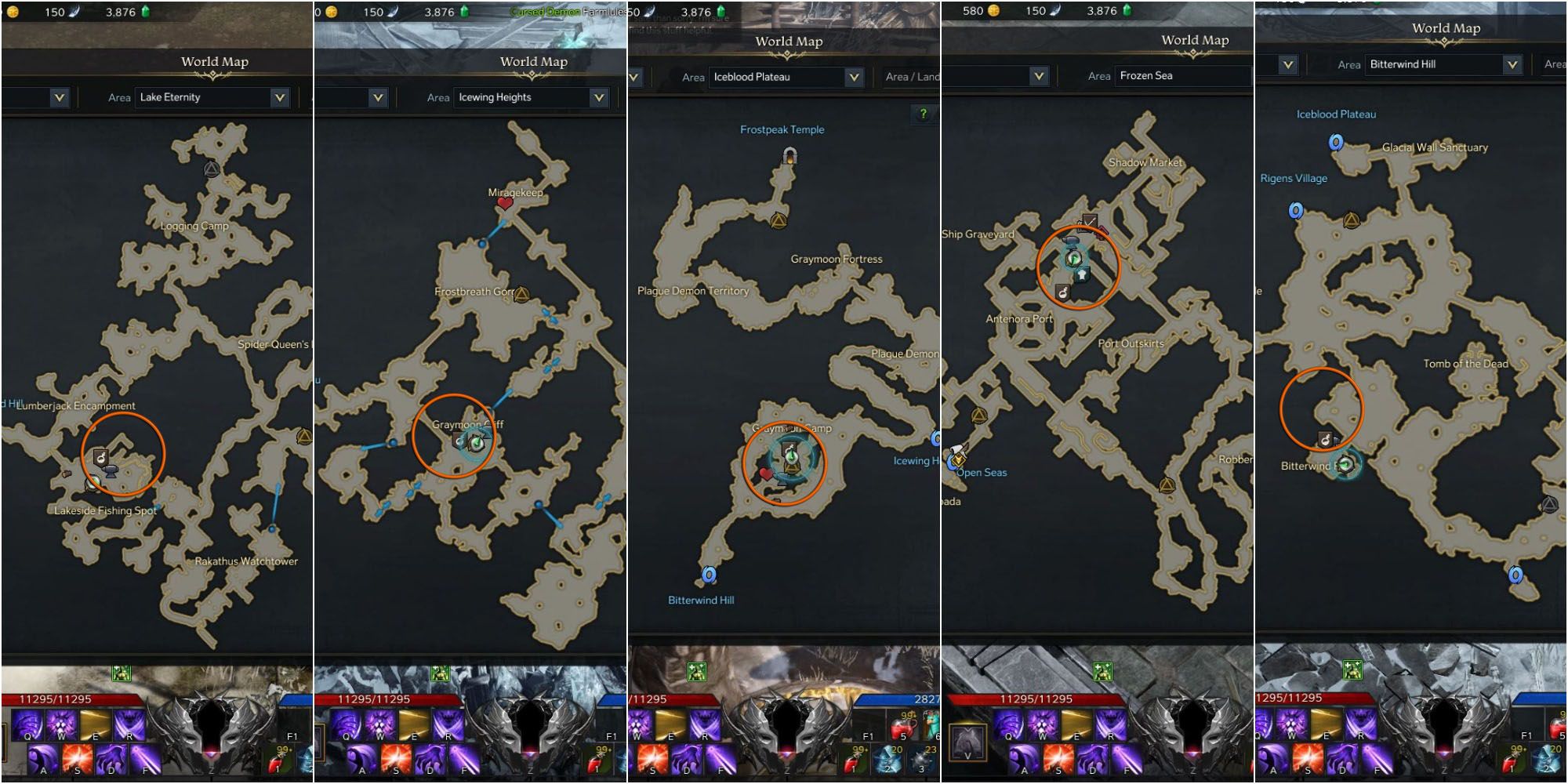 Anyway, once you’ve procured the Sapphire Sardine from him, head on over to cook Helena in Frozen Sea. She’s conveniently right next to one of the triports. 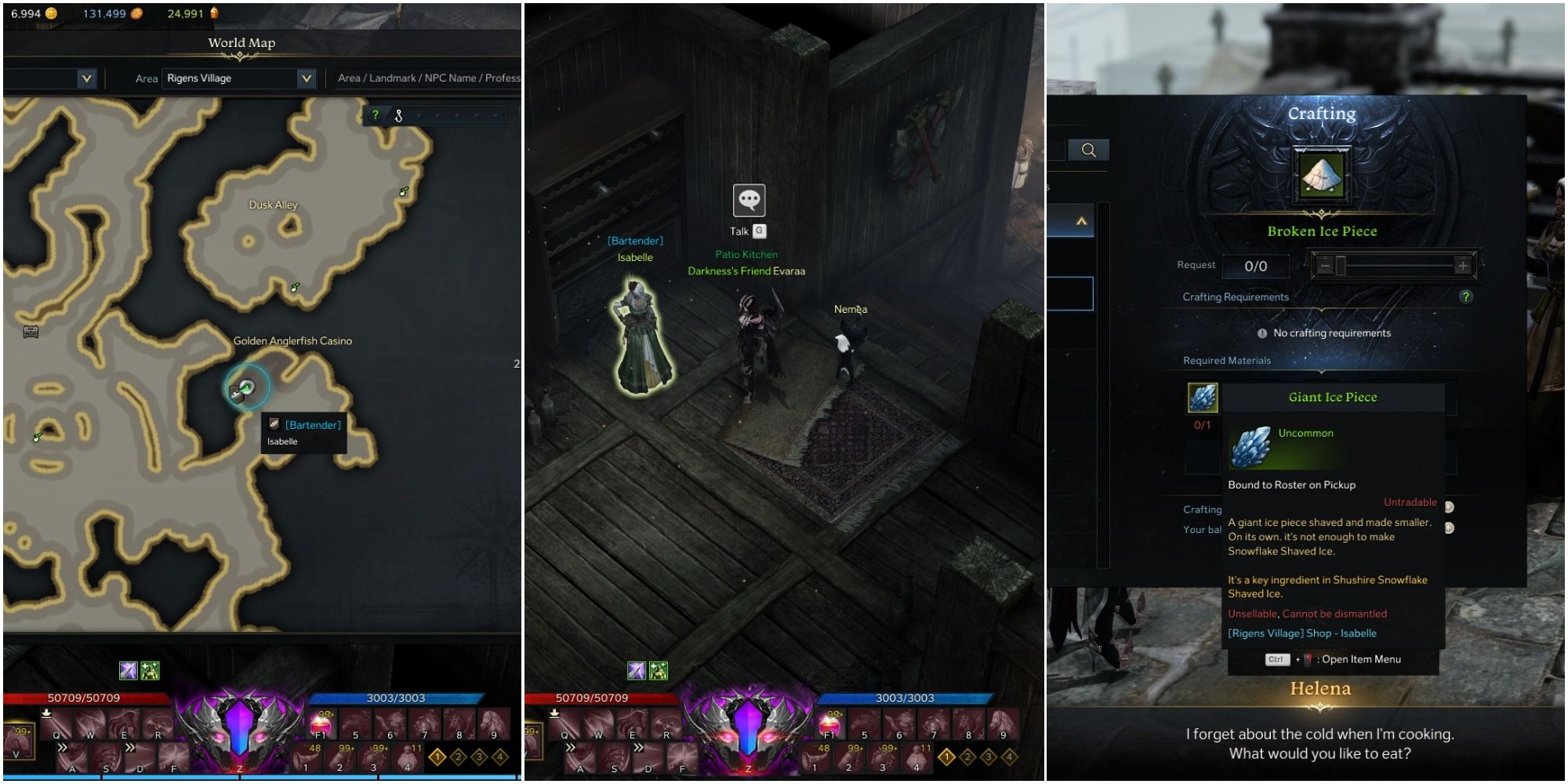 Now here comes the true RNG fest of Shushire’s cooking collectibles. Go to Bartender Isabelle in Rigen’s Village (Golden Anglerfish Casino, to be precise), and buy a generous amount of Giant Ice Pieces for 150 silver each, which she sells under her “Ingredients” tab (not her “cooking” tab). Though, honestly, you’ll probably be back for more. After you think you’ve got enough, make your way to cook Helena to craft Broken Ice Piece (you would think you could break them yourself, no?). It’s a one-for-one trade, so one Giant Ice Piece becomes one Broken Ice Piece, but here’s where the RNG enters: there is a chance for each craft to create a Chopped Ice Piece instead.

With all that said, be prepared to go back and forth between Isabelle and Helena a few times, since you need 50 Broken Ice Pieces and five Chopped Ice Pieces in order for Helena to craft Snowflake Shaved Ice, but be careful! In order for this to become Shushire Snowflake Shaved Ice (orange item), you must wait one minute for the regular Snowflake Shaved Ice (blue item) to turn into it. Otherwise, if you consume it before it transforms into its collectible version, you’ll have to go through the pain of that RNG all over again. 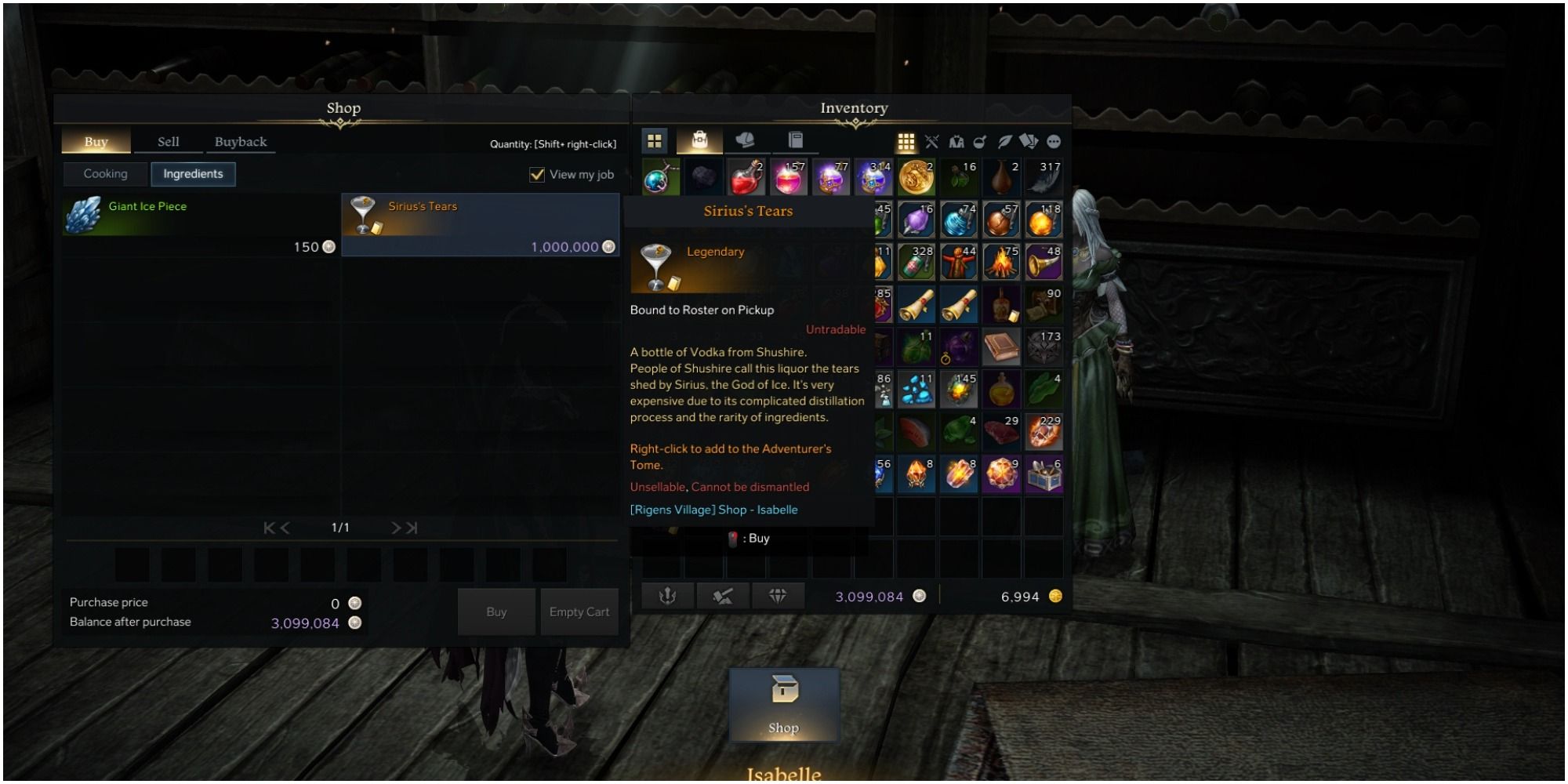 Sirius’ Tears can be bought from Bartender Isabelle for 1,000,000 silver and consumed for credit on the spot. This may sound like a lot of silver (and it certainly is in tier one), but you’ll make it back in no time. Worse comes to worst, you can convert gold into silver, and we’ve got some gold-making tips here, but silver truly does come easily, much more easily than gold, especially later in the game in tier three.

That said, if you feel like it’s too much money, Isabelle isn’t going anywhere, so come back when you’ve got the million to spare or if it’s the last thing on your Shushire checklist.