Green cards in the Magic: The Gathering Warhammer 40,000 Commander decks are dominated by the terrifying Tyranid army. These extragalactic insectoids are endlessly adaptable, capable of surviving any environment and fighting all armies in the eternal war of the distant future.

In the Warhammer 40,000 Commander decks, the green cards are loaded with powerful new mechanics, with a focus on +1/+1 counters, tokens, and card advantage. Let’s take a look at some of the best. 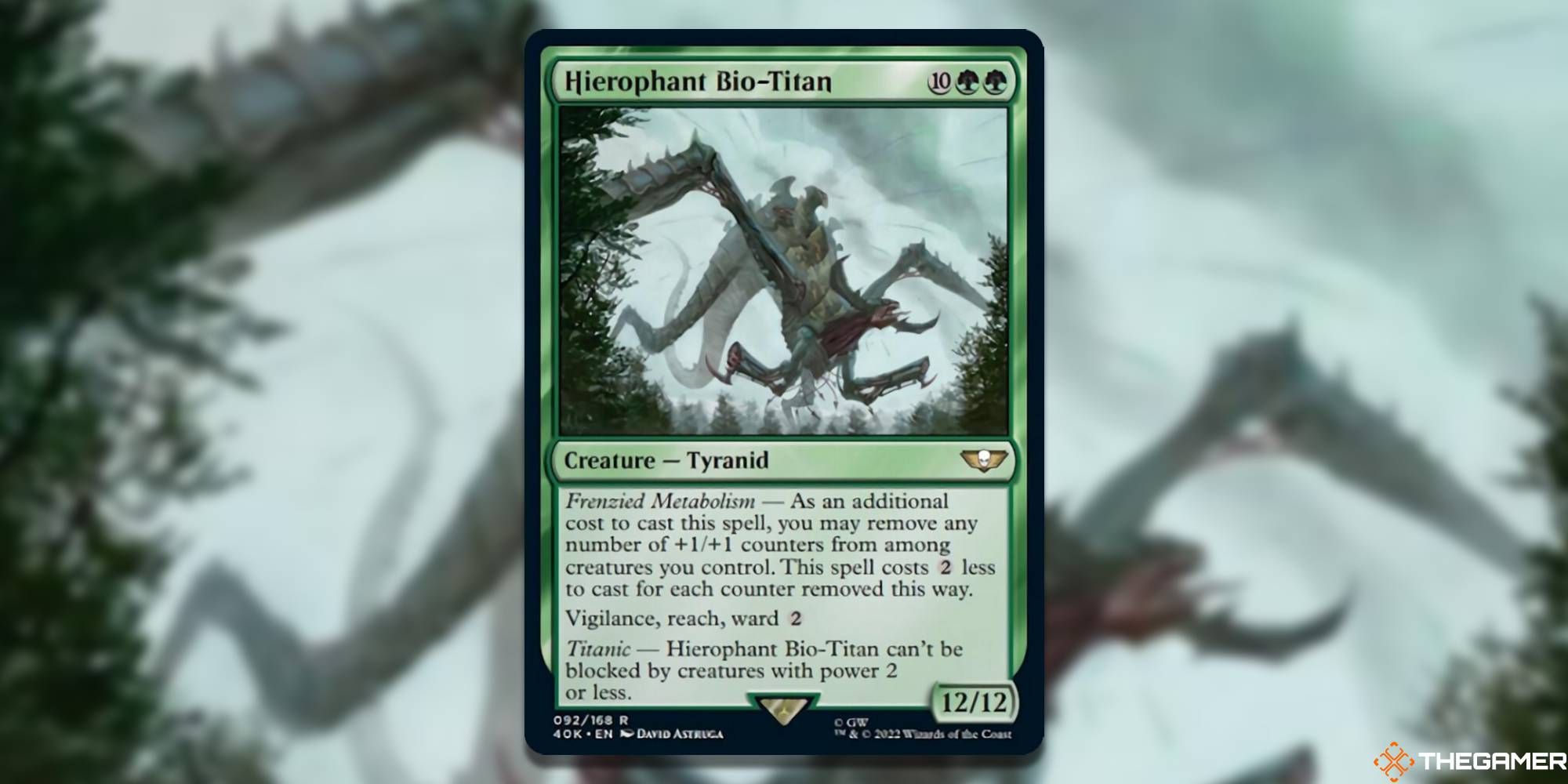 This Tyranid is the epitome of green top-end creatures, a huge body with a bunch of abilities and not one of them is trample. Hierophant Bio-Titan can have its casting cost reduced a bit with the Frenzied Metabolism ability, reducing it by two generic mana each time you choose to remove a +1/+1 counter from a creature you control.

Its second unique ability, Titanic, makes the Hierophant Bio-Titan a little harder to combat, as creatures with power two or less cannot block it. 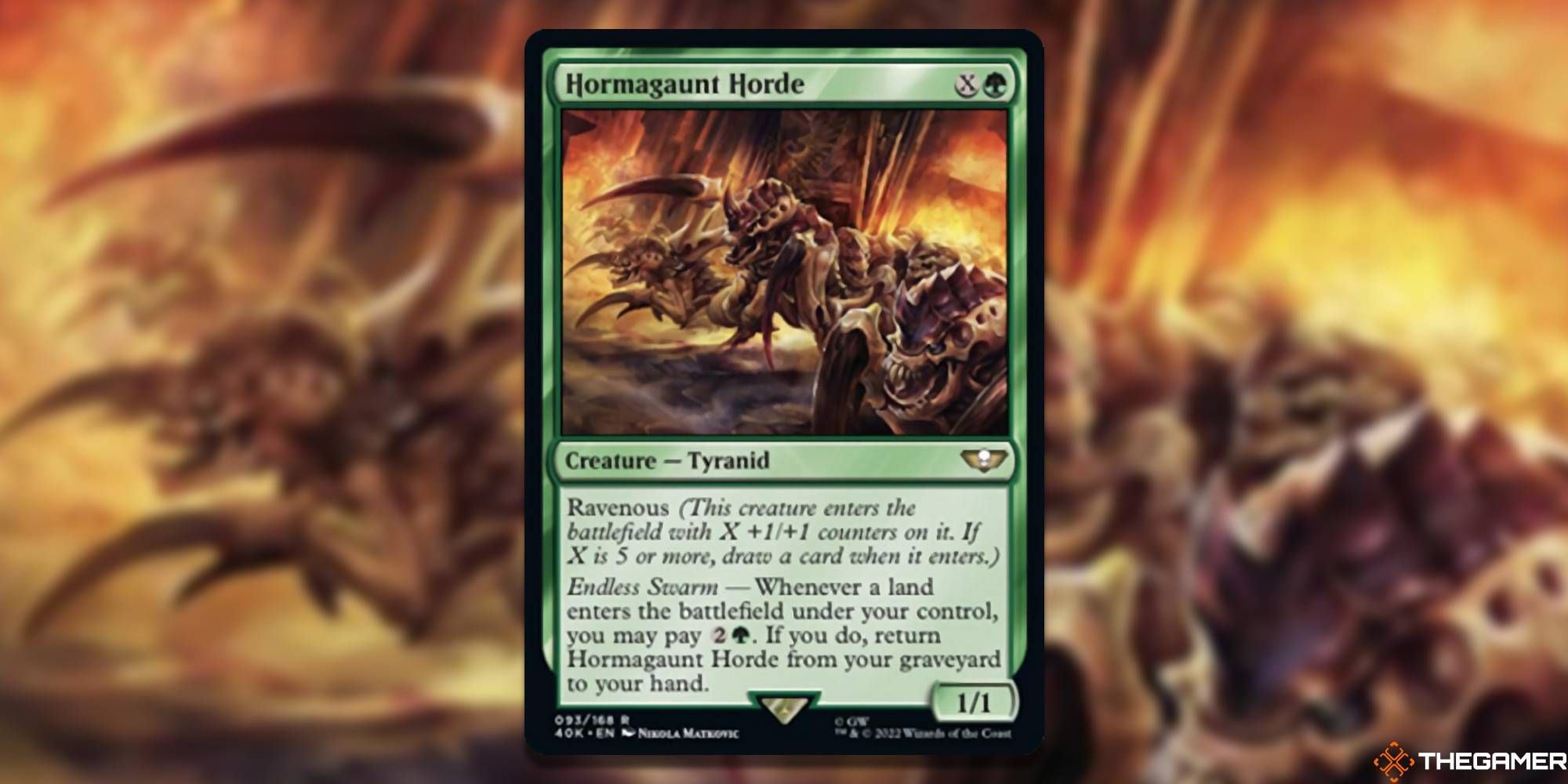 Hormagaunt Horde is particularly tough to beat with its Endless Swarm ability. When a land enters the battlefield under your control you can pay three mana and bring it back to your hand, giving you another opportunity to cast it even larger next time. 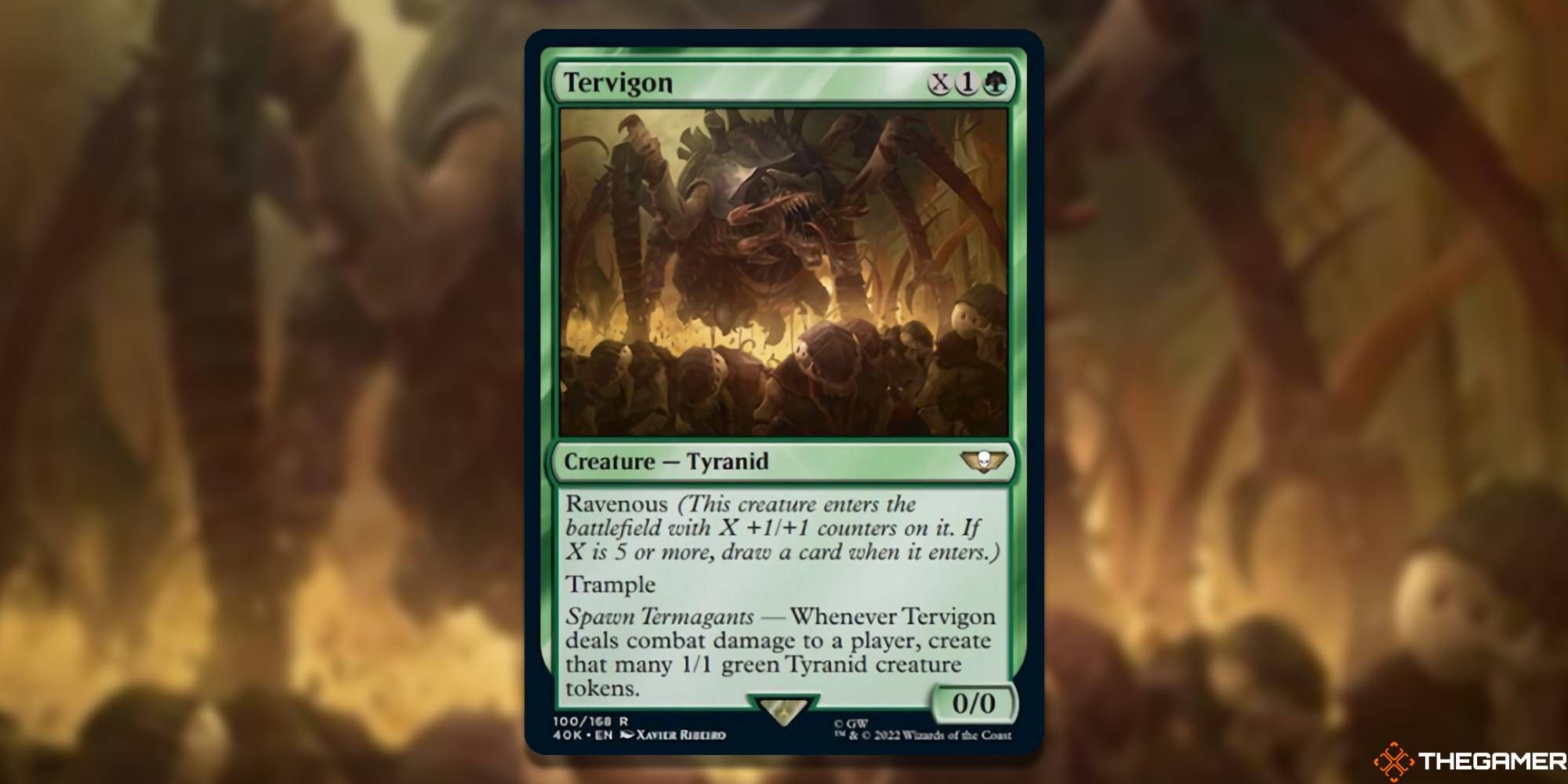 Another creature with Ravenous, this beefy Tyranid comes with trample, which means any extra damage done to a blocking creature rolls over to your opponent. Just pump enough mana into Tervigon’s ravenous ability to guarantee it’ll deal some damage to your opponent, and you’ll trigger its other ability, Spawn Termagants.

This ability creates 1/1 Tyranid tokens equal to the amount of damage Tervigon does to your opponent, quickly creating an army all on its own. 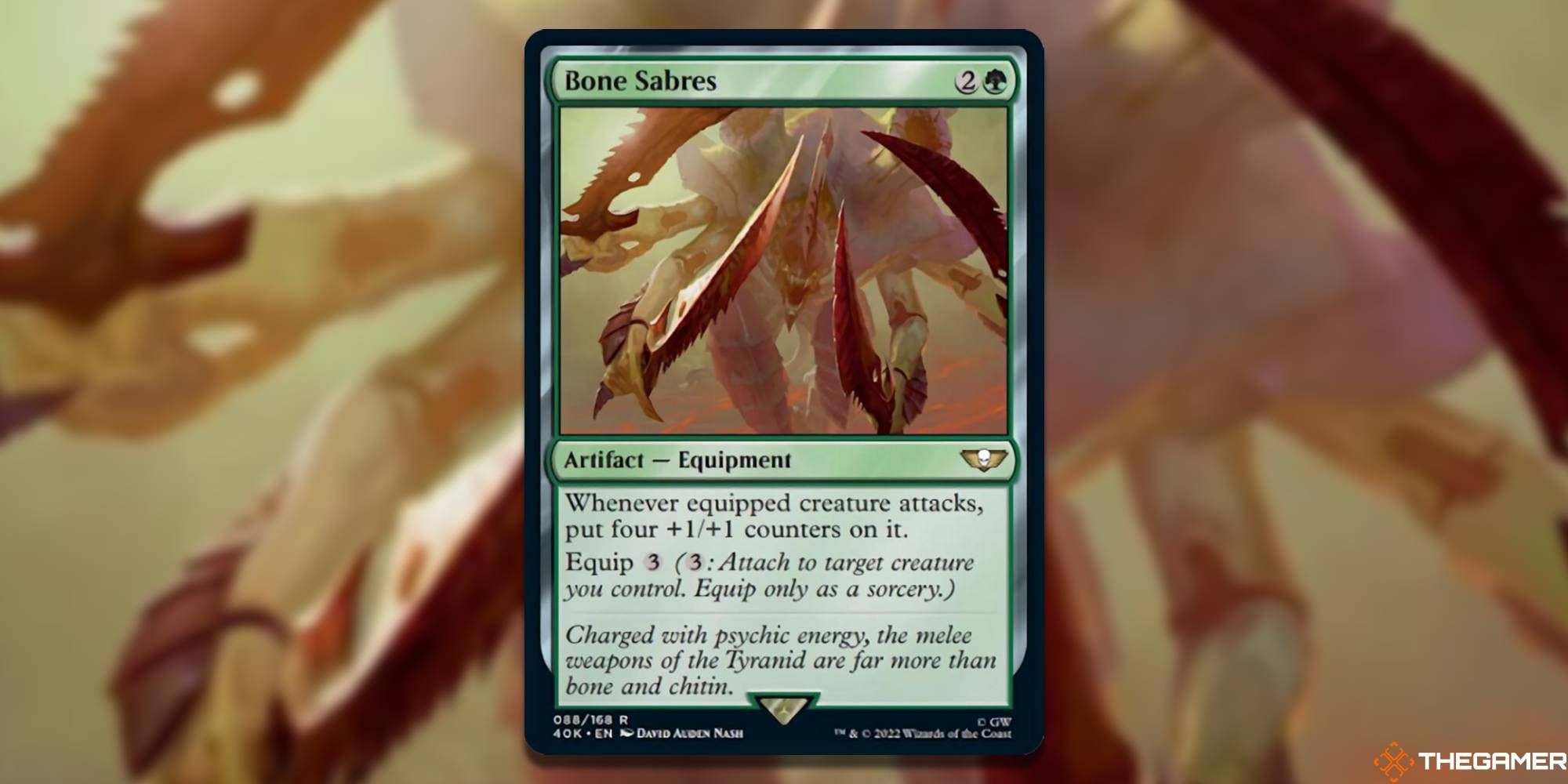 As far as equipment goes in Commander, it doesn’t get much better than Bone Sabres. At two generic and one green mana, the Bone Sabres come down early in the game, and with a relatively low equipment cost at three generic mana, you can attach it to an early mana ramper or smaller creature.

Once a creature with Bone Sabres attacks, you place four +1/+1 counters on the creature. Suddenly your little 1/1 Llanowar Elf is now a 5/5 beater. Once you’ve pumped up a creature enough to your liking, you can equip Bone Sabres to another creature and start powering it up. 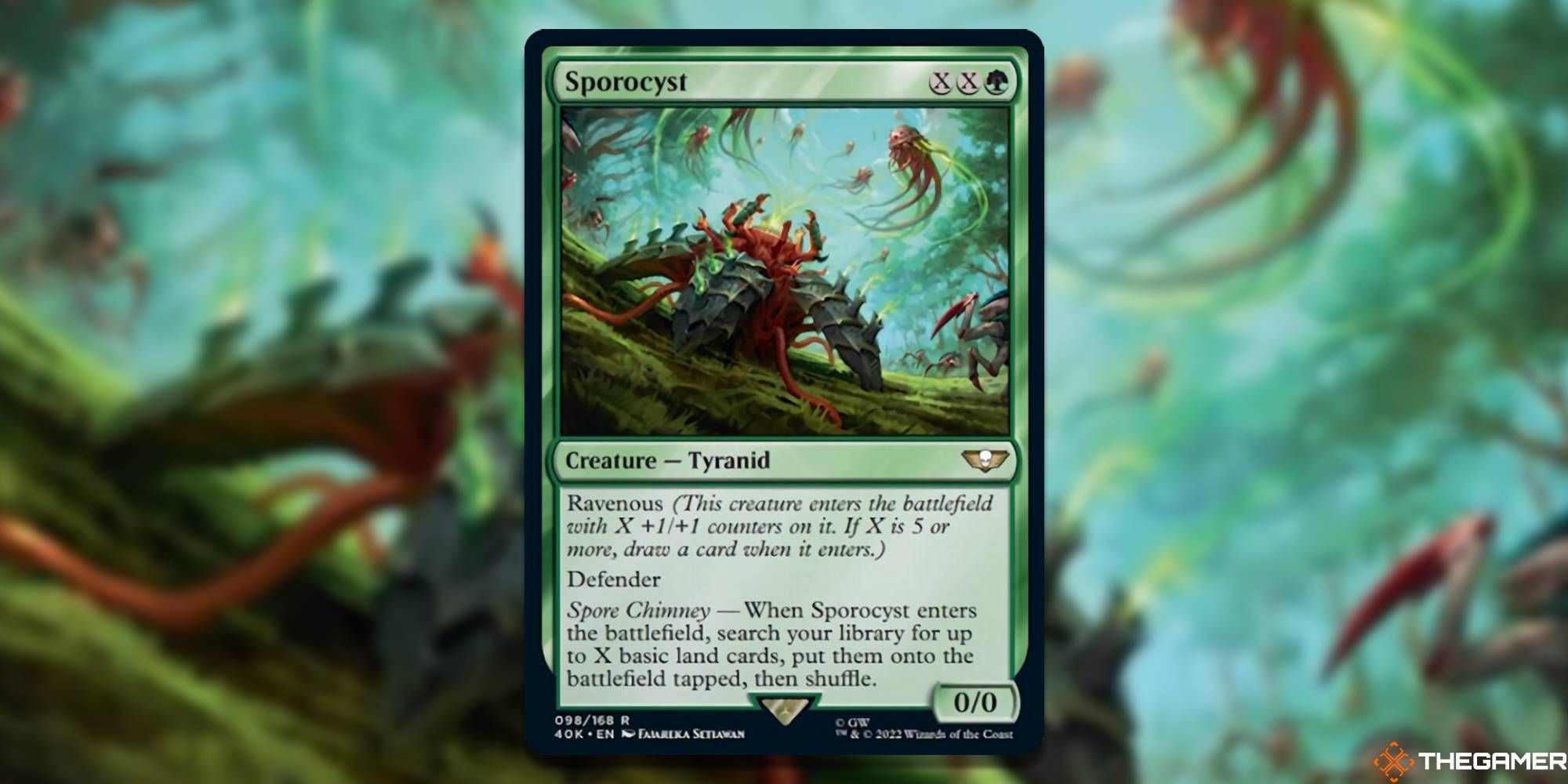 This plant-looking Tyranid is a weird little creature. With a double generic X casting cost, it requires players to pay the same amount for both X costs. In order to trigger Sporocyst’s ravenous ability, players will have to pay a total of 11 mana into the creature to draw their card, ending up with a 5/5 creature with fefender, meaning it can’t attack and can only block.

The payoff for that steep cost is that you can search your library for up to five basic lands, ramping you up in mana and possibly triggering a few landfall cards along the way. 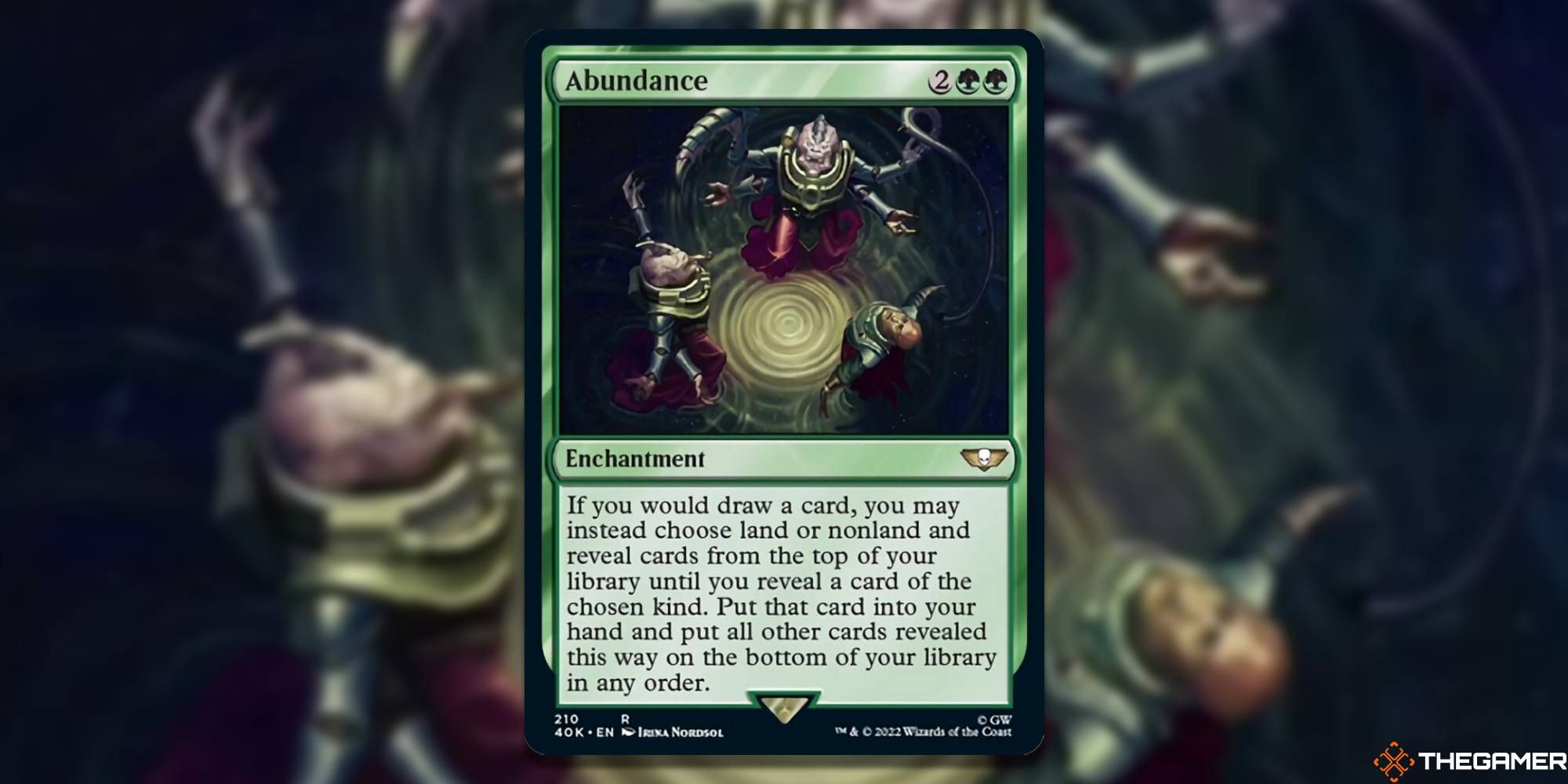 A reprint in the Tyranid Swarm Commander deck, Abundance has been a long-time staple in green-based strategies. This enchantment allows you to skip a draw and instead declare land or nonland, and start revealing the top card of your library until you find a card of the type you chose and you add that card to your hand.

Effectively this lets you skip through land pockets in your deck and always guarantees you’ll find a card you can play. 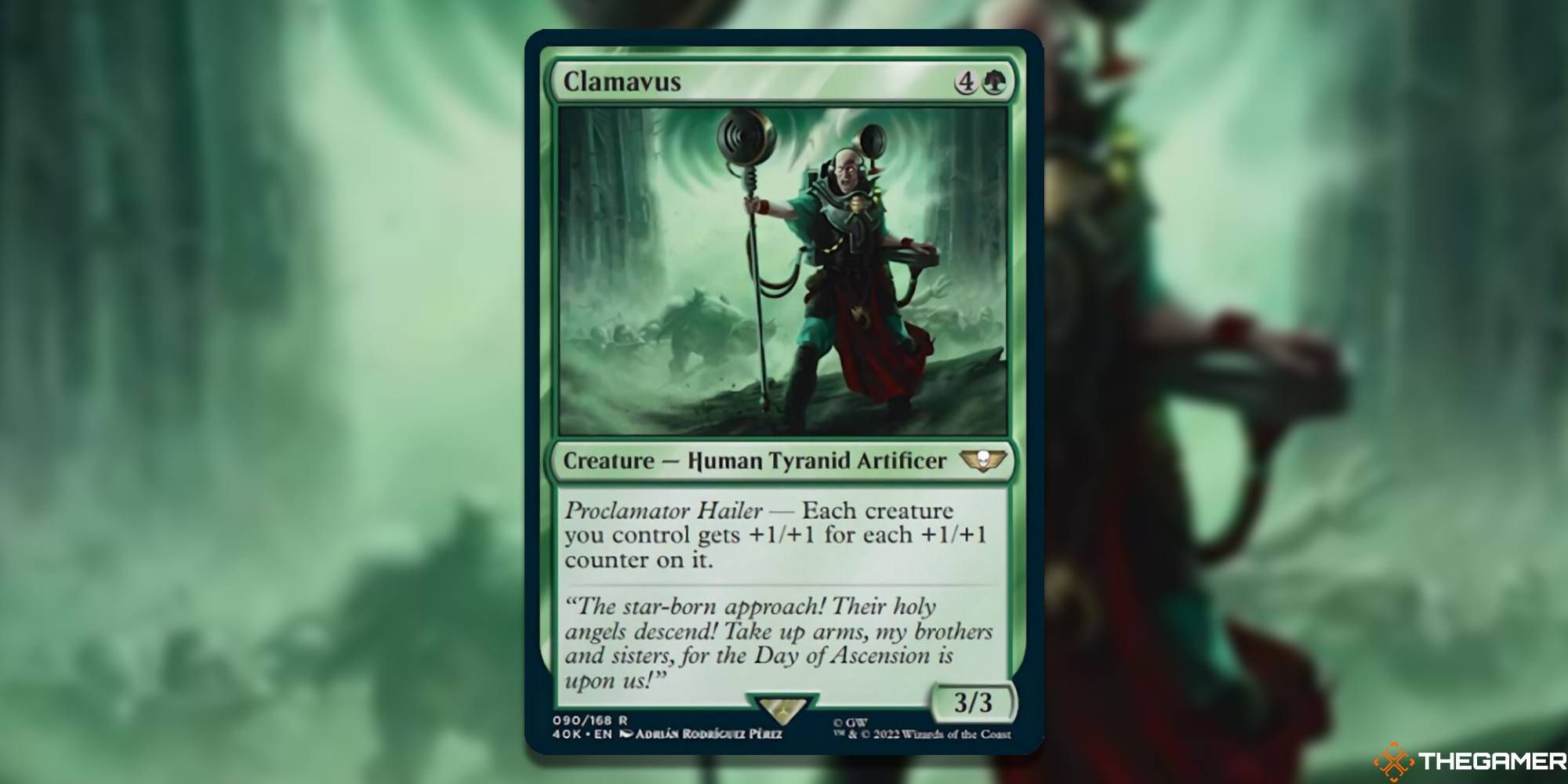 This interesting card acts like a traditional lord card, cards like Elvish Archdruid, but for creatures with +1/+1 counters on it. Each creature you control gains +1/+1 for each +1/+1 counter on it. While slightly confusing, it means that all your creatures get that much more powerful – for every counter, they get a total of +2/+2.

While dependent on placing counters on your creatures, in the right deck it isn’t hard at all to add counters to your board. 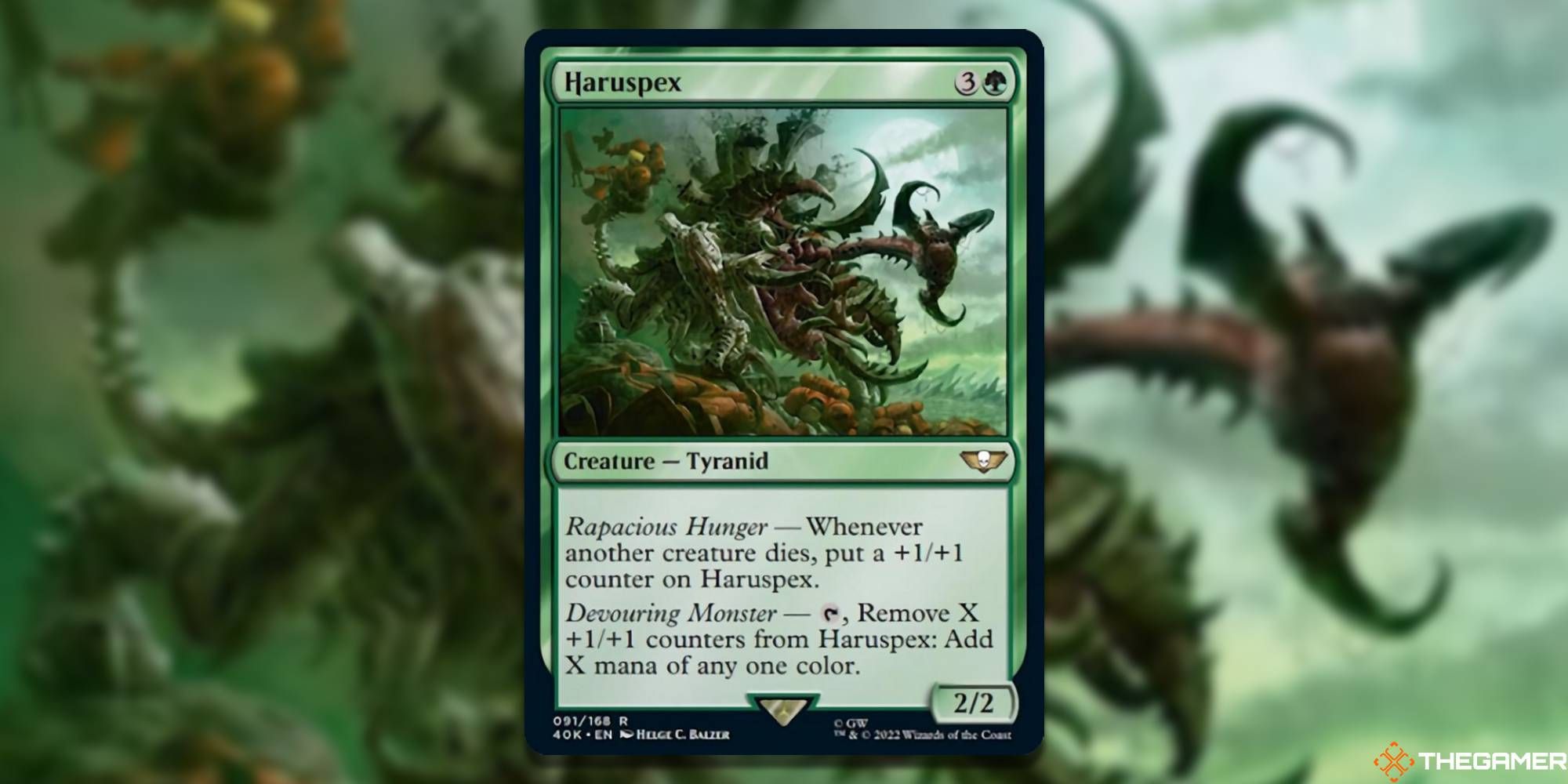 Speaking of adding counters, Haruspex is all about +1/+1 counters. Whenever a creature anywhere dies, it gains a +1/+1 counter. When played early, Haruspex can easily gain a bunch of counters while your opponents fight among each other. In a deck with a lot of sacrifice effects, players can load up the Haruspex for its second ability, Devouring Monster.

With this ability, you can remove any number of counters from it to gain that much mana of one color. The Haruspex rewards you for everyone else’s creatures dying, which is the best kind of Magic: The Gathering card in Commander. 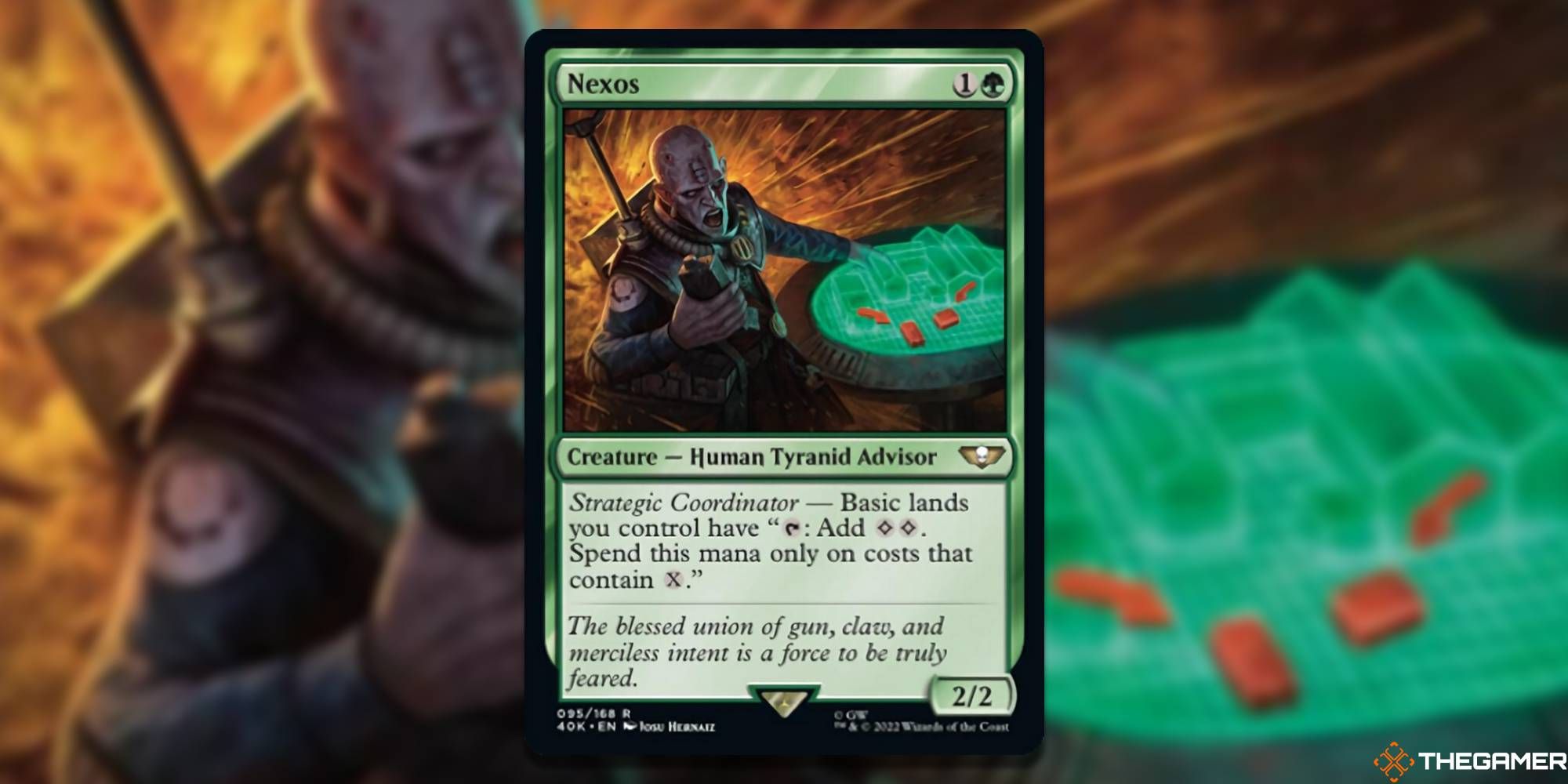 Nexos is an interesting card because it affects all your lands. With its Strategic Coordinator ability, Nexos gives all your lands the ability to tap for two generic mana instead of their usual mana generation ability, however, you can only spend that mana on spells with X in its casting cost.

While a little niche, excelling in decks that have plenty of X spells, it can turn any of those spells into a threat double what it could have been. 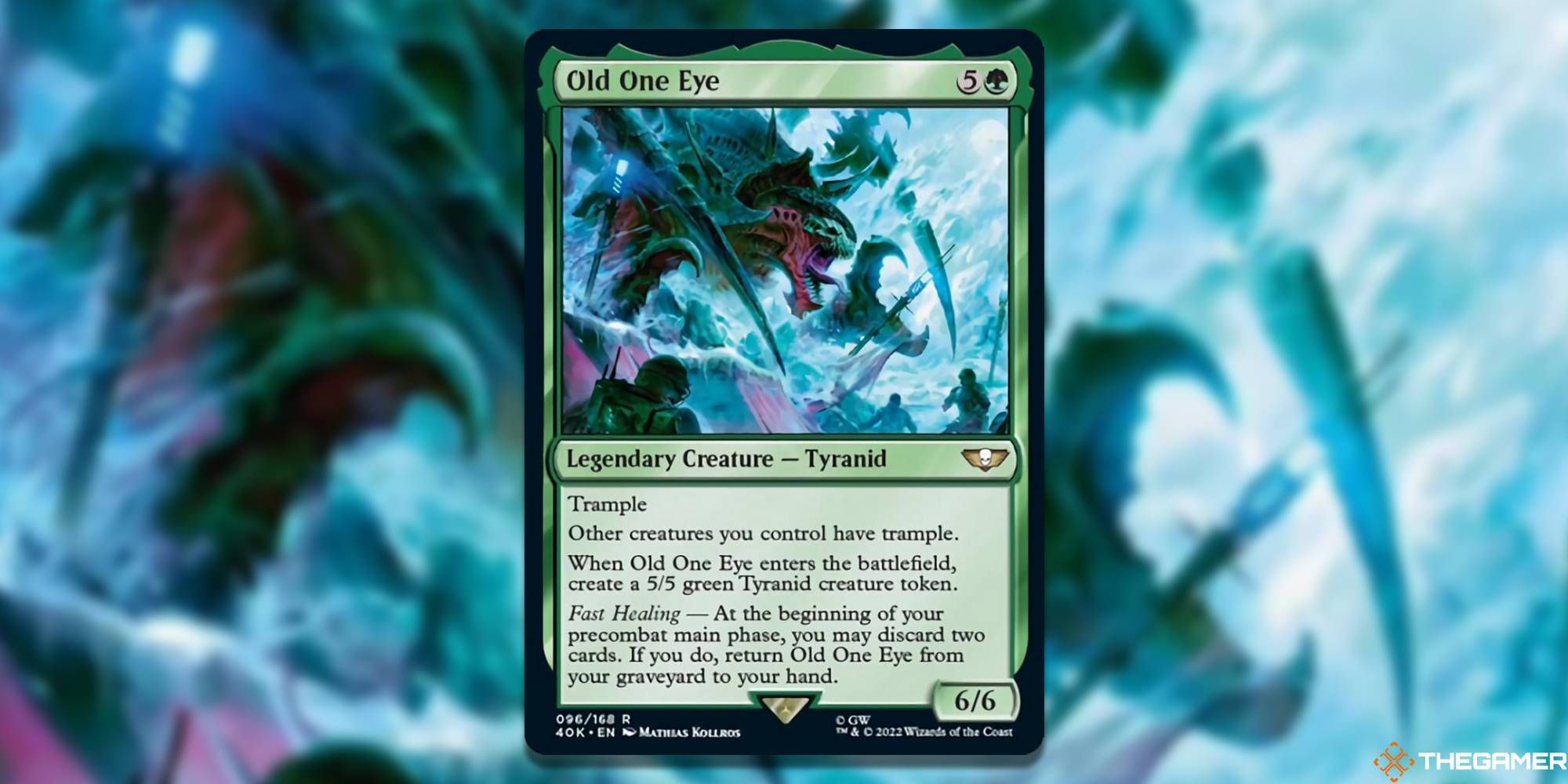 This powerful legendary creature brings a lot to the table. When it enters the battlefield you get a 5/5 Tyranid token, giving you a total of 11 power for just six mana total. Old One Eye then gives all your creatures trample, which is incredibly powerful.

If that wasn’t enough, Old One Eye just won’t die, capable of coming back to your hand with its Fast Healing ability.