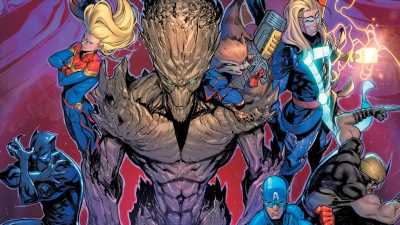 Are you a Marvel fan and tabletop RPG aficionado that would love to experience your favorite comic universe by slinging dice with friends around a table? The Marvel Multiverse Role-Playing Game could be just for you. The newly-announced board game will allow players to step into the boots of Marvel’s greatest champions, or to create their own heroes, to battle the biggest and baddest villains in comics.

While the game itself won’t be on shelves until 2023, the official rulebook, dubbed the Marvel Multiverse Role-Playing Game: Playtest Rulebook, will be sold first beginning March 2022. The book is written and co-designed by Matt Forbeck, author of The Marvel Encyclopedia and Dungeons & Dragons: Endless Quest, and will introduce players to the game’s D616 System (named after Earth-616, naturally). The press release doesn’t explain what the system is exactly, only describing it as a “natural evolution” to existing tabletop rules that will be “simple and easy-to-learn” for newcomers to the genre.

Since this is comics we’re talking about, the rulebook is packed with colorful illustrations by various comic artists. It features profiles on heroes such as Spider-Man, Thor, Captain America, Black Panther, Ms. Marvel, Captain Marvel, Wolverine, Storm, and many others.

Marvel hopes that releasing the rulebook this early will allow fans to offer feedback on the game before its full release the following year. The company plans to reveal more information about the Playtest Rulebook this fall.

In the meantime, if you’re a Dungeons & Dragons fan seeking new tabletop experiences, here are our recommendations for the best fantasy and sci-fi tabletop RPGs to play.  For Witcher fans, you can now help kickstart an upcoming board game based on that series as well.

So tabletop/Marvel fans, what’s your take on the Marvel Multiverse Role-Playing Game? Let us know in the comments!