There’s plenty of superhero action to be had in Marvel’s Midnight Suns, as you battle hordes of Hydra agents in turn-based tactical combat with your team of heroes. But the action isn’t restricted to fighting the bad guys, as your downtime between daily battles is used to level up your heroes and gain valuable bonuses.

One of the key advantages you have between battles is the ability to choose which single-use items you can take with you. While you can also spend energy improving your cards to make them more awesome in combat, many of these upgrades center around crafting and having the right Cauldron Books to make the items you need. Here we’ll discuss the Cauldron Book locations and the recipes inside each.

You will not be able to do anything with these books until you can use Agatha’s Cauldron. To do that you’ll need to have unlocked the second Power Word (Reveal) and completed Agatha’s next task, which unlocks the Cauldron for use.

Books Inside The Abbey 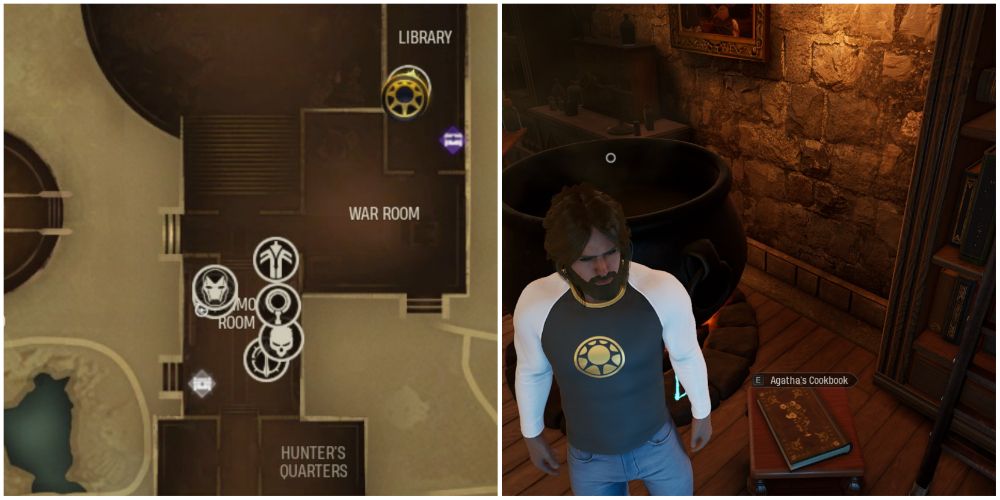 You’ll find this on the table right next to the cauldron in the library after completing Agatha's quest to reignite it. 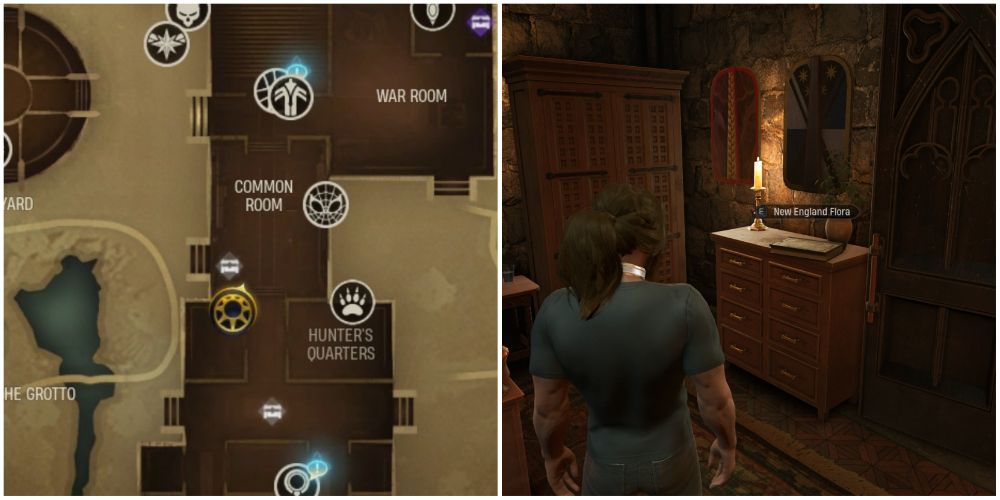 In the Caretaker's Room, which is directly opposite The Hunter’s room. The room only becomes accessible the day after the first story battle with Wanda, likely around Day 15 to 20 if you do the story missions as quickly as you can. 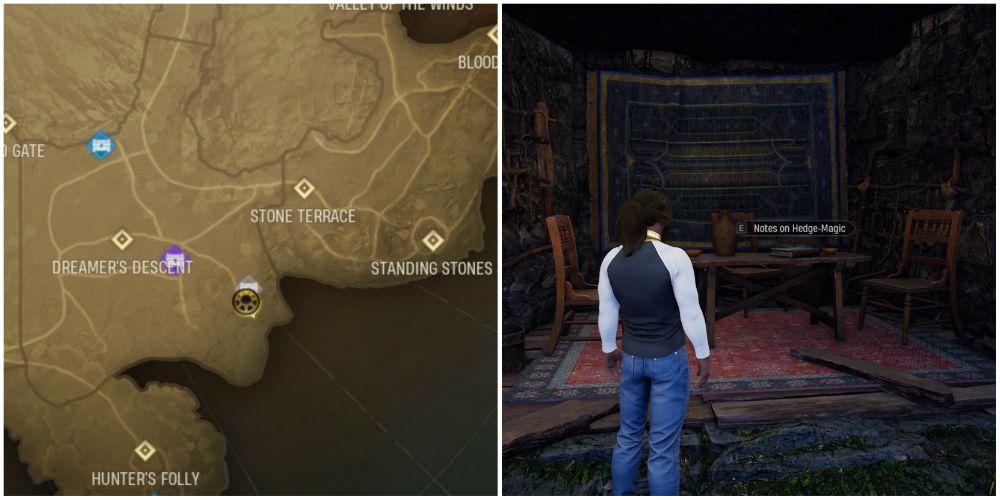 From the Dreamer’s Descent fast travel point, walk along the path east to the crossroads and go straight across. The path starts to go up some steps and turns a little to the right. At the end is a nook in the rock, with a table, chairs, and a tapestry. The recipe book is on the table. 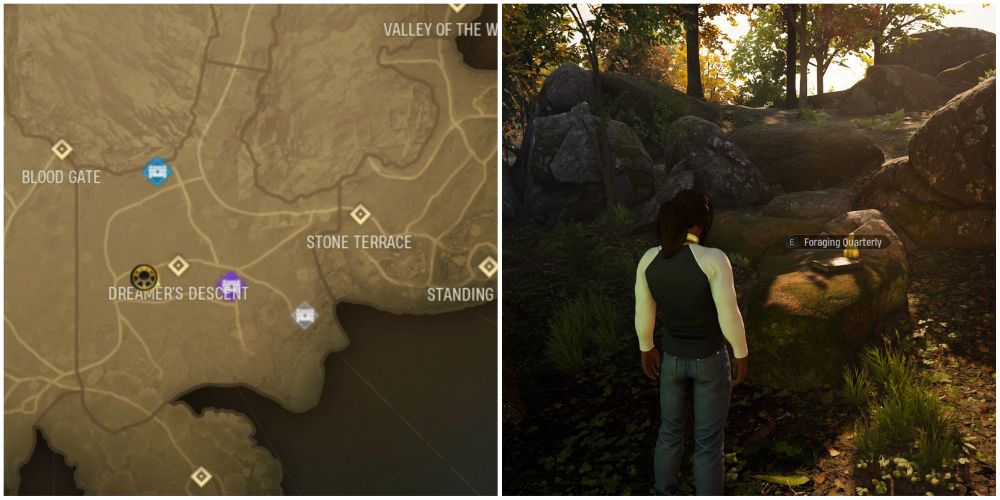 When you arrive via fast travel in Dreamers Descent, turn west and walk a few paces along the path. Before you get to the broken section of wall with an archway still in it, go left off the path just after two broken pillars. On a rock by some candles, you’ll find the book. 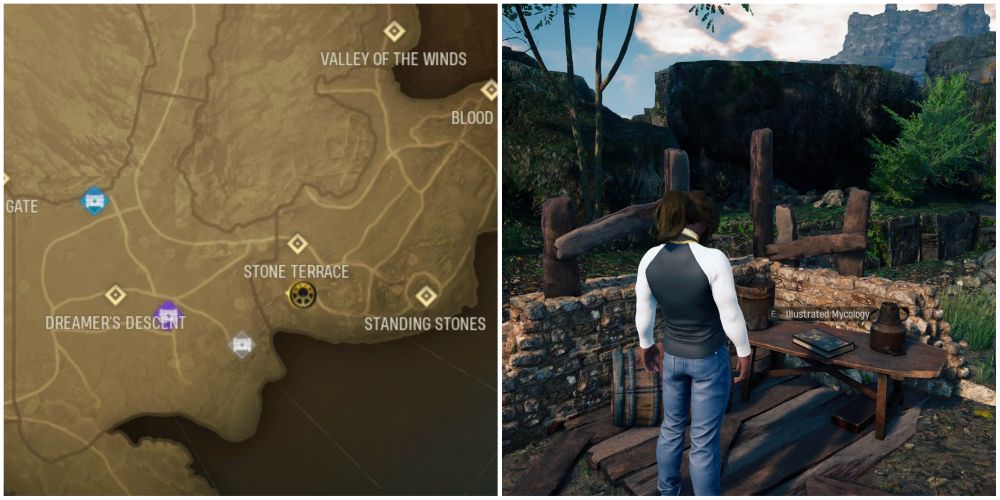 Head to Standing Stones and follow the path west down the stairs and keep going past your childhood fort. There are the remains of a building just beyond the fort, and the recipe book is on the table there between a bucket and a pale. 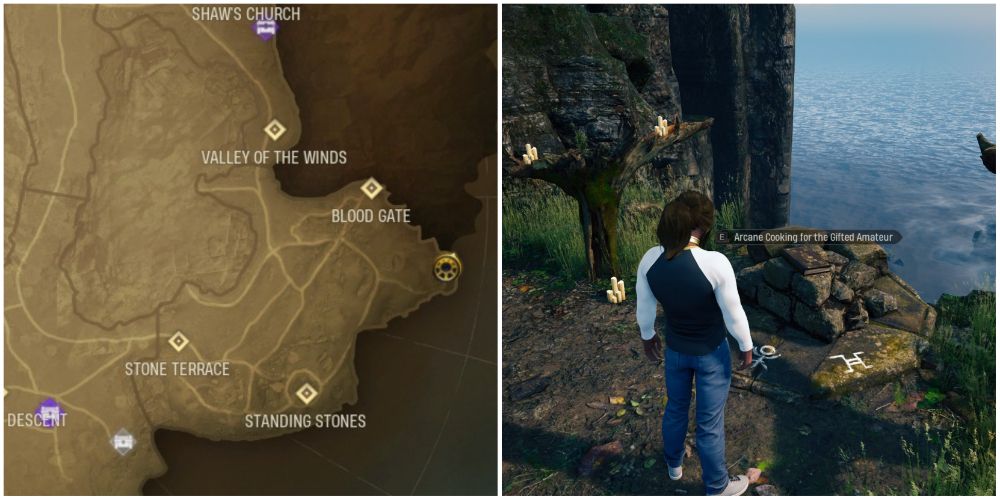 This time, follow the path that heads northeast from Standing Stones. At the fork, take the right-hand path towards the cliff edge. At the end of the path, you’ll find a small ritual spot overlooking the water, and the recipe book is on a pile of stones at the edge. 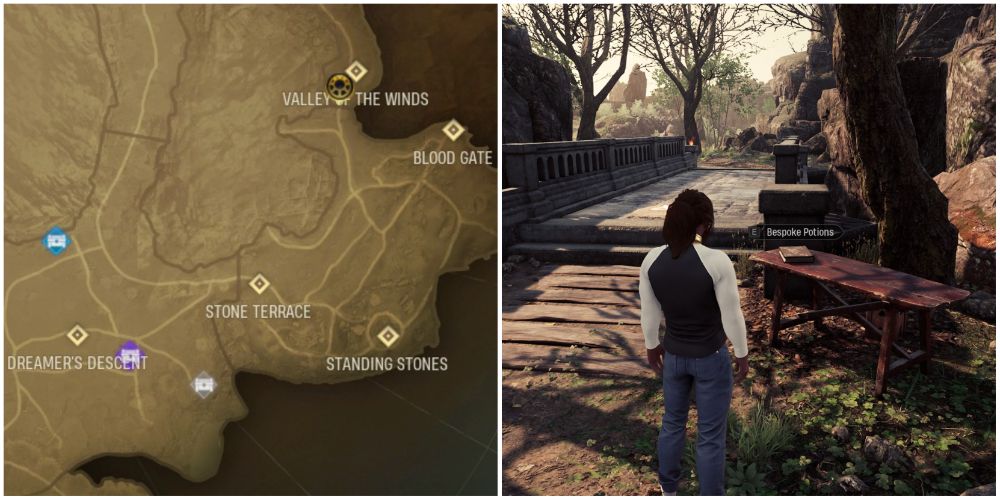 On a table, as you enter Valley of the Winds from the south, just on the other side of the bridge you rebuild with Power Word Reveal or a little left of the exit after you leave the second Blood Gate after receiving the Power Word. 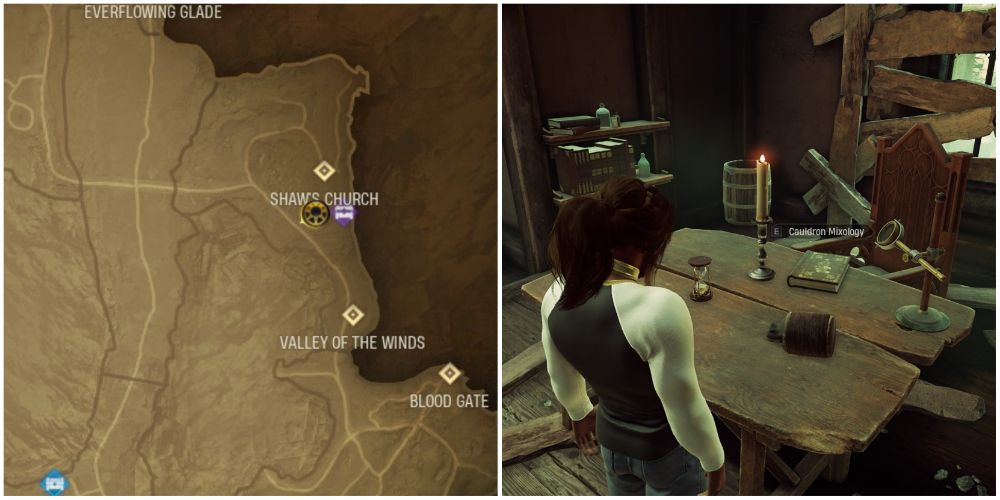 Go into the back room (study) in Shaw’s Church. To get there, go northwest from Valley of the Winds and take the right fork in the path that heads first north and then arcs to the right and down to the church. Once inside, go into the room at the back. The Cauldron Mixology recipe book is on the table to your right. 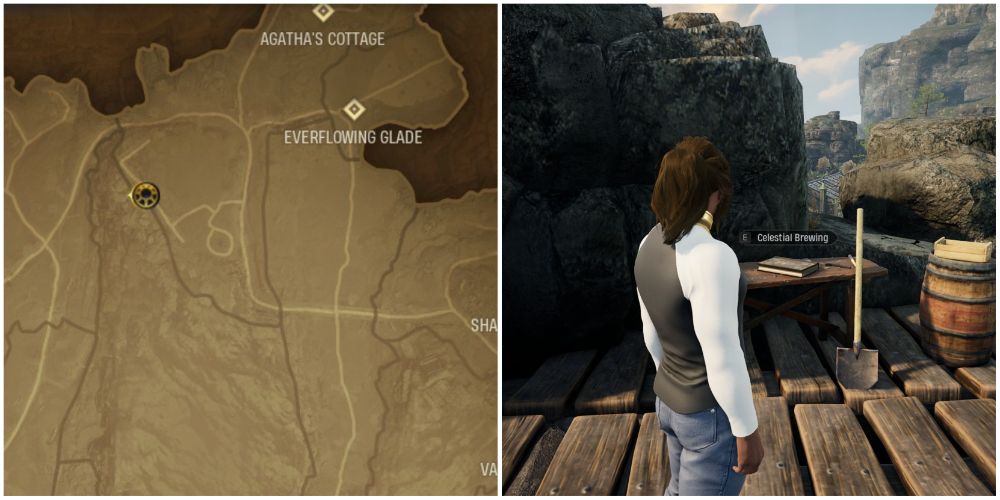 Leave Valley of the Winds northwest and take the left fork in the path. Head west over the high bridge and keep to the path as it turns north. Take the first left turn which goes west again, up the hill with the Old Salem Cemetery on your right. Go up the steps and right, where you’ll see a table with a book on it on your left. Grab it to gain the Celestial Brewing recipe book. 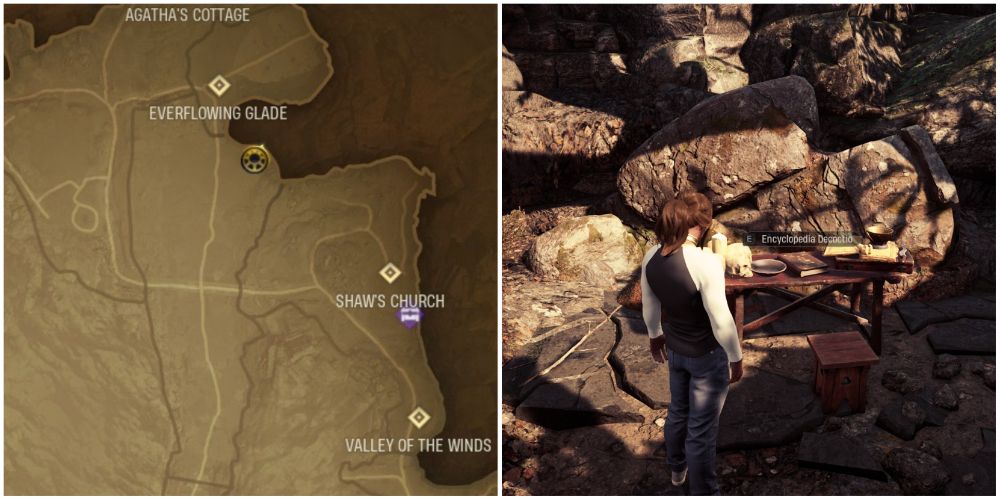 Follow the path south from the fast travel point at Everflowing Glade. Go down the steps and left at the small crossroads of paths, towards the Hunter Shrine. Just before you get to it, take the left path to a table on which you’ll find the Encyclopedia Decoctio. 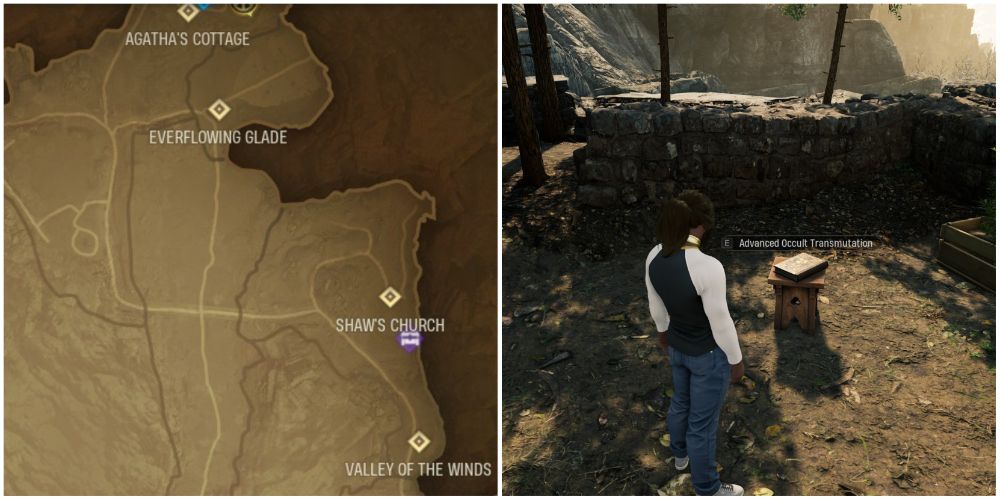 Fast travel to Everflowing Glade, head west, then turn right at the fork in the road. Take the first right turn and head up to Agatha’s Cottage. If you’re facing the cottage, walk around to the right into the garden there. You’ll see a little stool with a book on it to your right. It’s the Advanced Occult Transmutation recipe book you’re looking for. 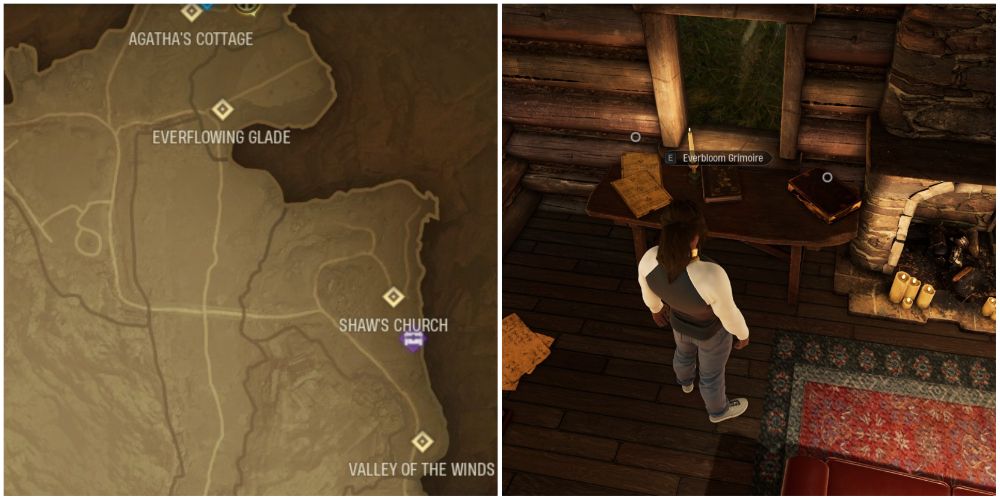 This one is inside Agatha’s Cottage. Head west from Everflowing Glade, take the right fork, then the first right turn. Break through the wall then head up the path and head up into the cottage. 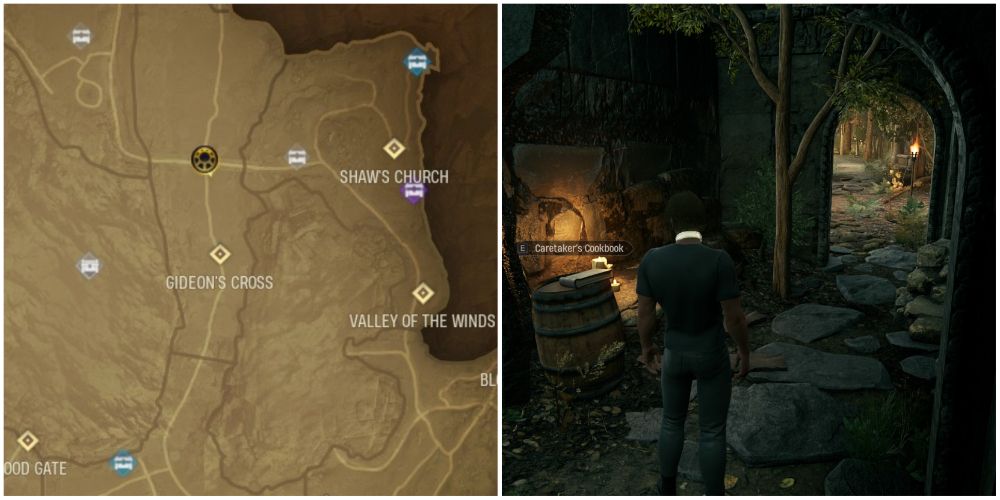 Head to Everflowing Glade and go south at the crossroads, down the steps, and right up to where the path is barred by rubble. You can now smash through it with Word of Power Break, once you do so keep heading south into Gideon’s Cross. You’ll quickly arrive at an archway underneath a high stone bridge. Just as you’re about to go under, you’ll see a barrel on the left and the Caretaker’s Cookbook resting on top of it. 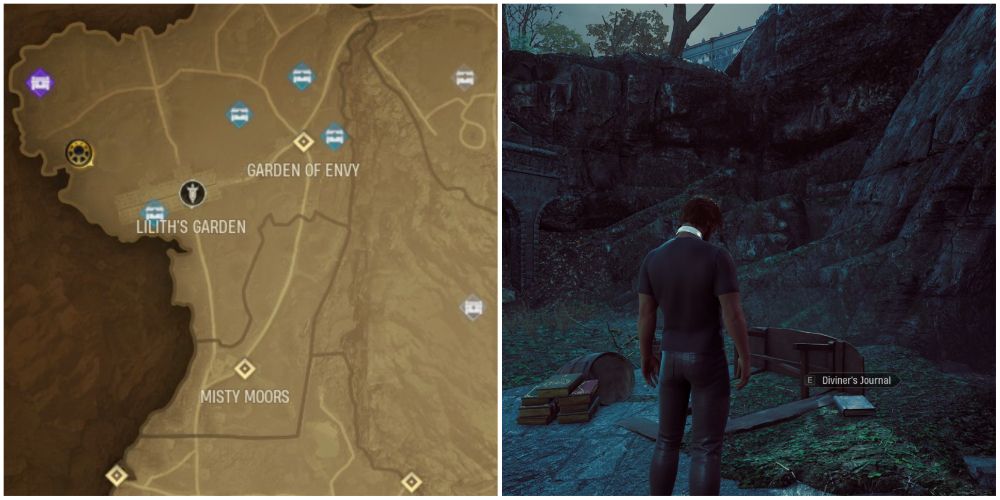 If you start at The Shop, follow the short path that heads northwest just outside the cave and smash through the wall that’s blocking the path north. Head into Misty Moors and take the right fork that heads right up and into Garden of Envy, breaking down another wall to get there. At the crossroads, take the path that leads northwest and follow it through another blocked area you can now deal with, under the bridge that goes to the final Blood Gate and keep heading west. At the very end of the path, turn left. Go up a few steps to where a table has been toppled. You’ll find the Diviner’s Journal on the floor by the table. 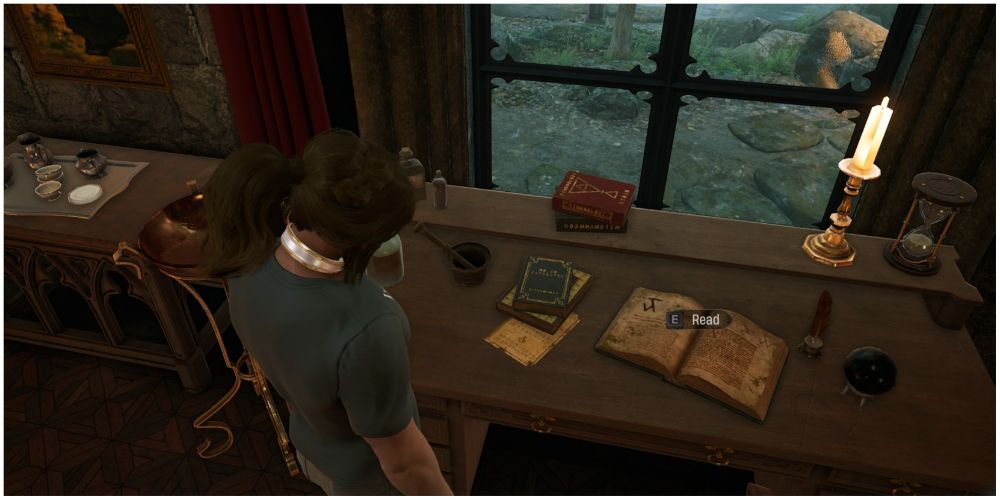