I don't know if the next Mass Effect is going to be called Mass Effect 4, or Mass Effect 5, or Mass Effect: A Different Subtitle, but I do know I'm going to scream if Shepard is in it. Well, more likely I'll just roll my eyes and say "ugh," before penning a 1,200 word essay on precisely why BioWare is wrong and I, as ever, am correct. The point is, we know little to nothing about it, and all we can do at this stage is speculate. But frankly, speculating about a game we know nothing about gets a little thin, and I've suggested enough changes or developments for games that have gone completely unheeded – remember my genius idea to have a Burnout game where you play as the road? – to know that devs aren't actually listening to me. Despite the fact that I regularly spin gold. Sit a while, if you will, by my wheel as I weave yet another tale of potential and untapped greatness: Mass Effect needs to make a Doctor Chakwas spin-off.

I recently wrote in defence of Kelly Chambers, the yeoman in Mass Effect 2. Not because I think she's a good character, but because I think the game woefully misuses her and wastes what might have been interesting potential. In a world swirling with intense killers on the edge of glory and defeat, Kelly is just a regular human lady who tells you when you have an email or a call waiting. She could have been a grounded contrast to everything going on around you, but instead is pushed to the fringes. That leaves Chakwas as the one who brings this much needed contrast to the game.

We meet Chakwas in the first Mass Effect, a game that, upon reflection, isn't too great at introducing characters. Still, Chakwas is a key part of the world building, and as one of few older humans we meet, also feels quite unique – even in a galaxy of space lizards and sexy mandible men. Ahead of the launch of the Legendary Edition, I set aside time to write about Chakwas, and how much I was looking forward to drinking brandy with her. She's an underrated character who adds a different texture to Mass Effect, and that's why she deserves a spin-off. 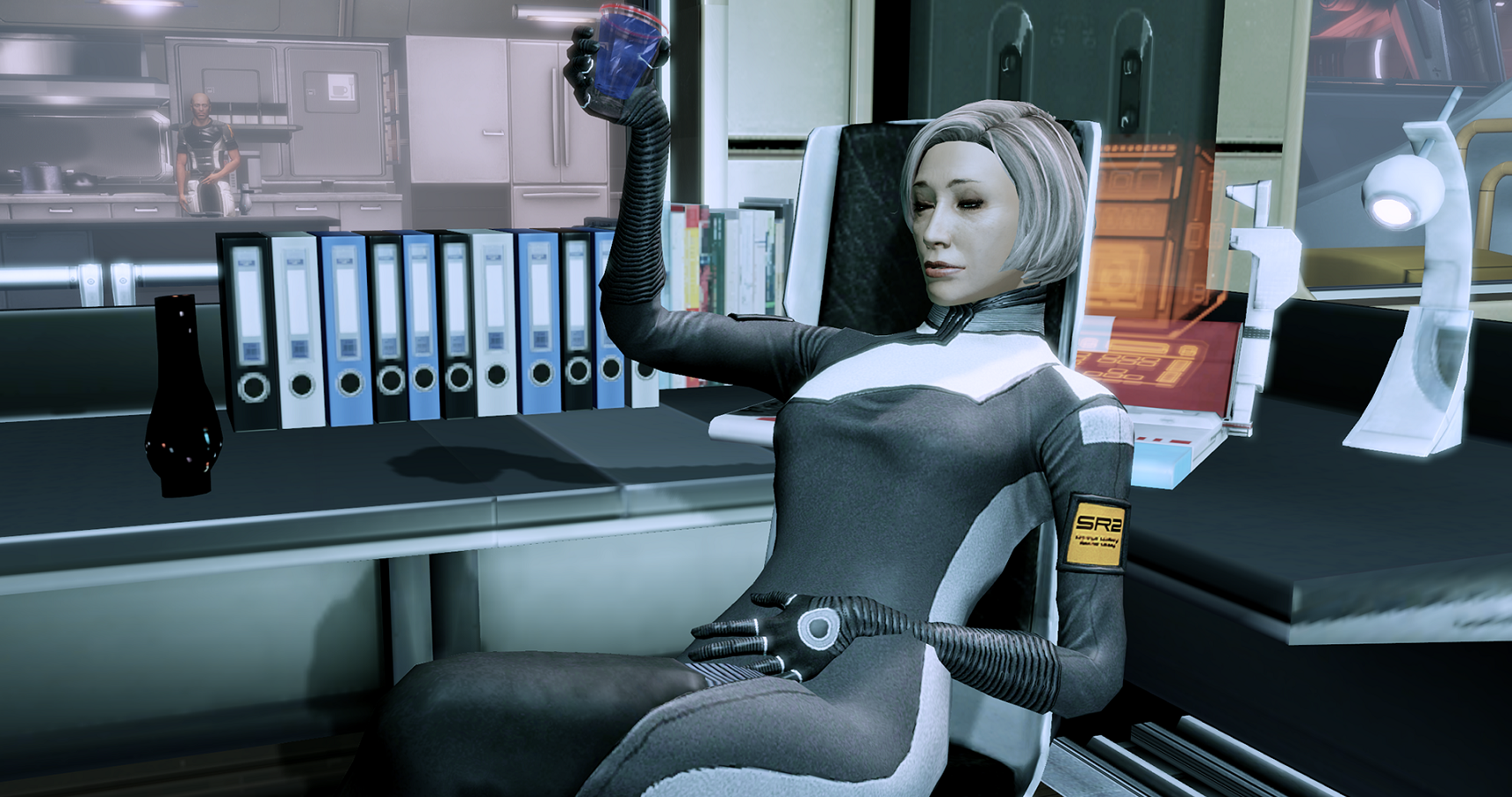 Chakwas is in her autumn years when she serves with Shepard, and while literally saving the galaxy is as high as the stakes can get, there is a sense that her earlier work was more personally important to her. She is very much a bit part player in Shepard's quest, whereas in her younger years her input was more crucial. Directly, she saved more lives. She joined the Alliance right out of medical school, initially just using it as a way to travel the galaxy, but quickly found a sense of duty amongst the soldiers she cared for. We're used to seeing Mass Effect as an adventure ourselves, flying to far off planets and shredding our enemies to pieces. It's only once the weight of the narrative sinks in that we, like Chakwas, realise we are involved in something so much bigger.

Having a Chakwas spin-off would take the attention away from the gunfights and the biotic blasts, and ground us more in the humanity of the thing. We'd see the real side of warfare, having to tend to soldiers, make difficult choices, and realise that sometimes you just can't win. That's not something Shepard ever really has to comprehend with – ultimately, Shepard is always victorious, even if Mass Effect 3 does a good job of offering up a sense of consequence. Chakwas lets us see the galaxy from a whole new perspective, and would give even greater care and attention to the storytelling at the heart of the Mass Effect galaxy. Now, let's drink to that.