Early on into your survival journey, one of the best structures to find in the overworld of Minecraft is an abandoned mineshaft. Not only are they relatively simple to find by going underground and walking around in caves, but they're also incredibly common. Sometimes, it's even possible to find multiple mineshafts morphed into a single structure.

Mineshafts are an amazingly good structure due to how big they are and how many ores they have the chance to expose. At the start of any survival world, they're an ideal place for some early game loot, experience points, and even a bit of adventure. However, if you're playing on harder difficulties or are new to the game, there are a few things to prepare before jumping right in.

Updated January 9, 2022, by Ashely Claudino: Mineshafts have been around since Minecraft was still in beta. Throughout all these years, the game has received tons of updates and modifications, and subsequently so have mineshafts. That is why we've decided to also update this article, to add relevant information related to the latest content that has changed mineshafts. 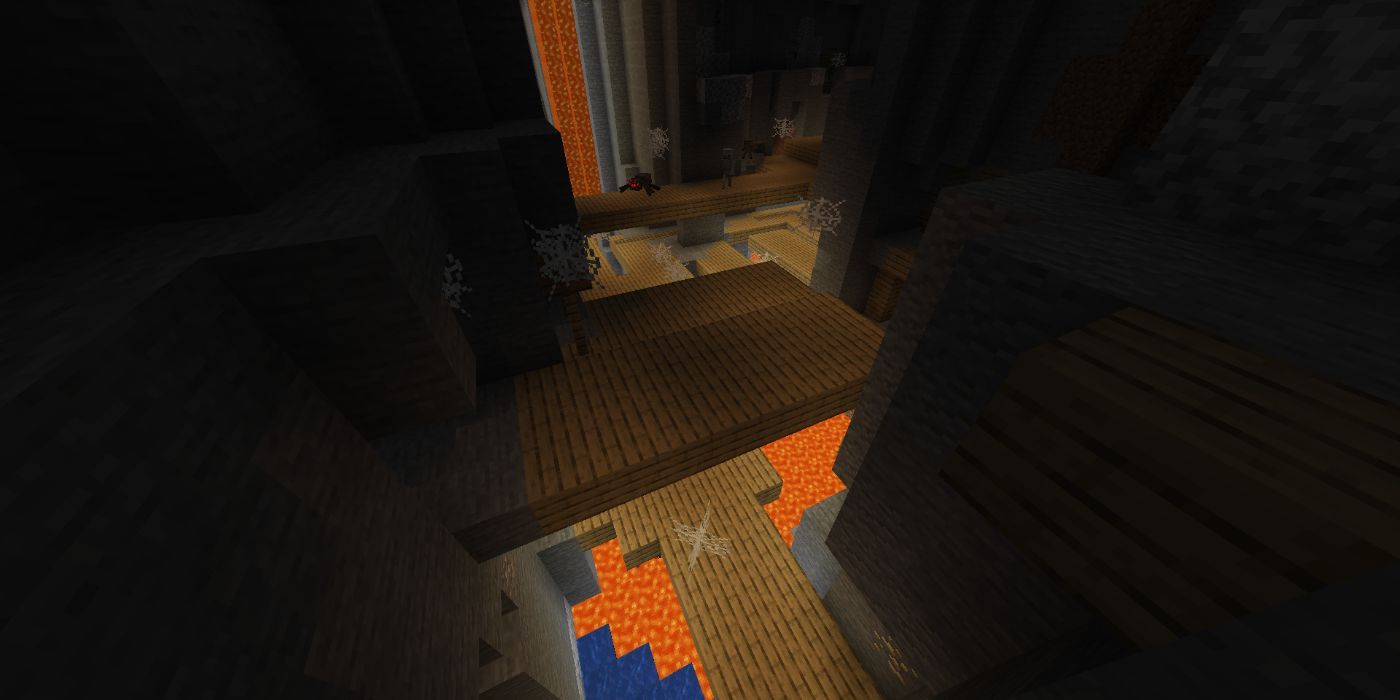 The first trick is to find a mineshaft. These structures, generally speaking, are not that complicated to find. Where there are caves, chances are there are mineshafts as well, so find yourself a cave that burrows deep into the ground and follow it for as long as you can. If you spot cobwebs and random wooden planks, you've found what you're looking for. 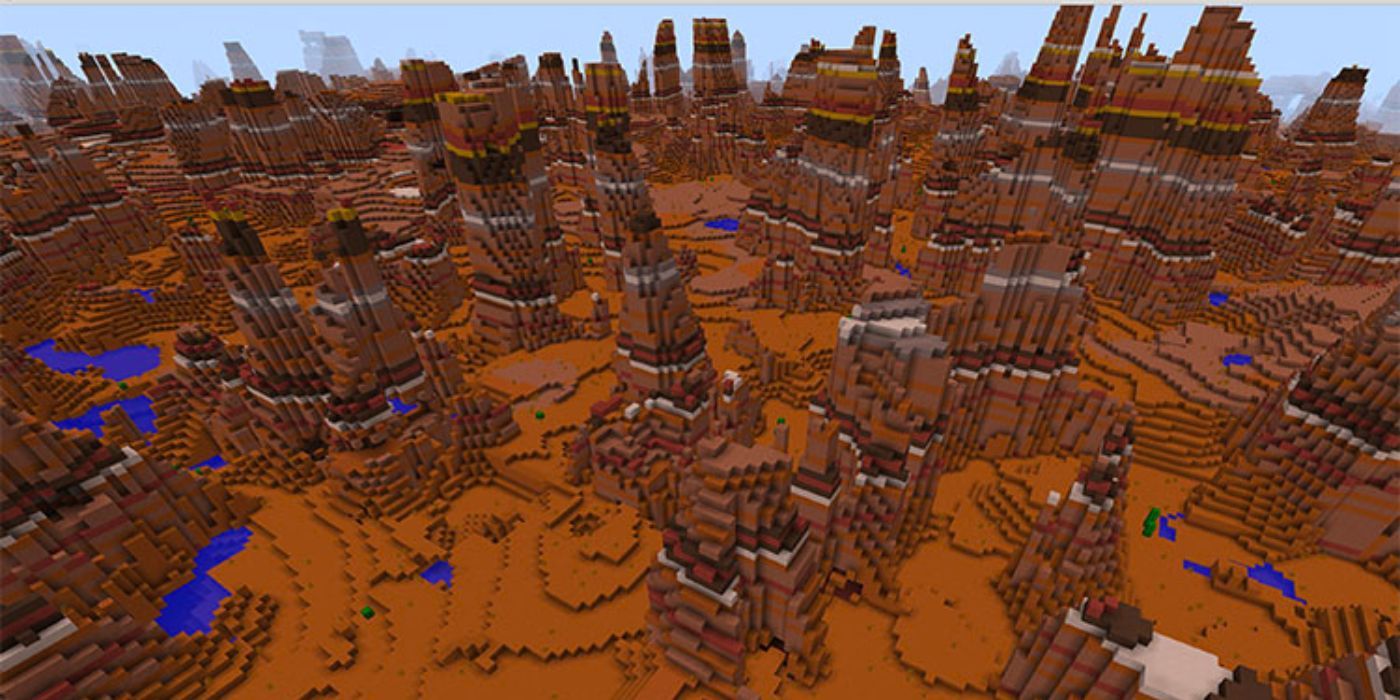 If you're lucky enough to spawn near or into a badlands biome, the task will be ten times easier. Badlands biomes spawn mineshafts at surface level, which means they can be spotted from afar when walking around. Typically, cobwebs and wooden structures are tell-tale signs of an abandoned mineshaft. The badlands versions also have more gold ore in them. 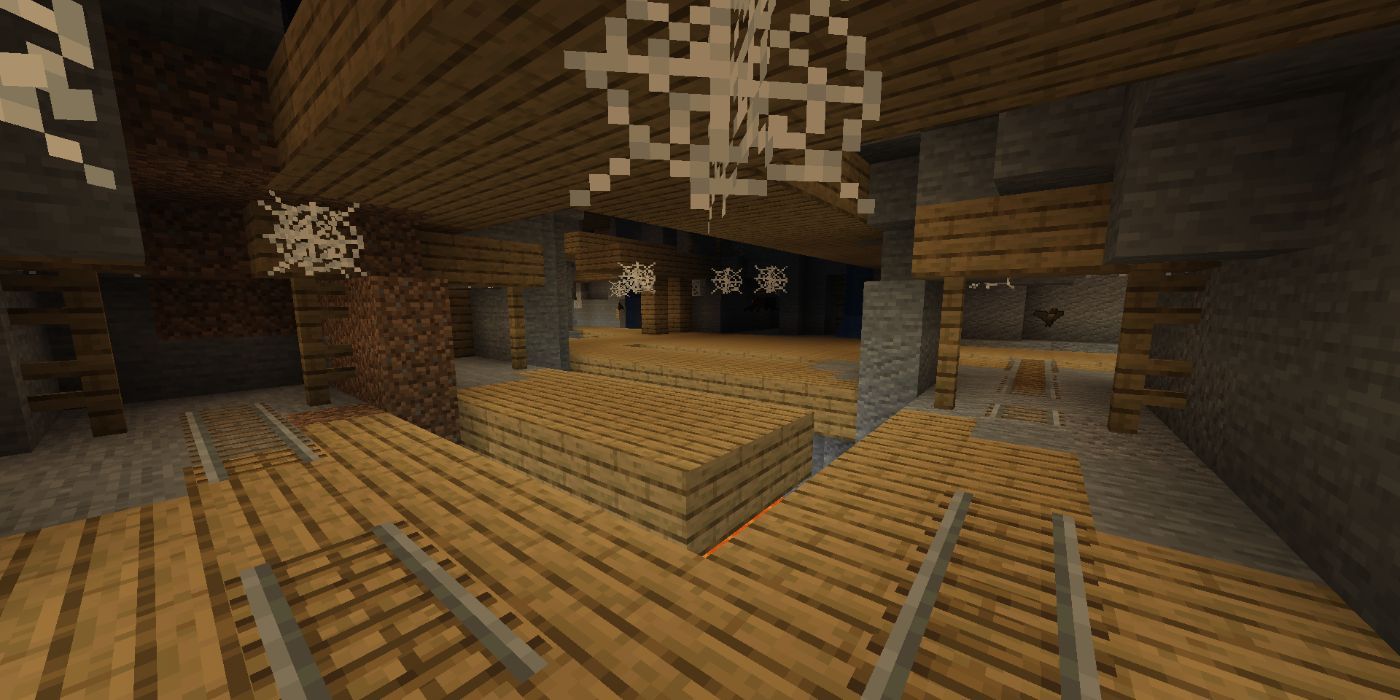 Although abandoned mineshafts are among the easiest structures to deal with, they're still swarming with mobs and potentially lava, so you'll want to go in prepared to avoid dying far away from your spawn point and losing all your items. 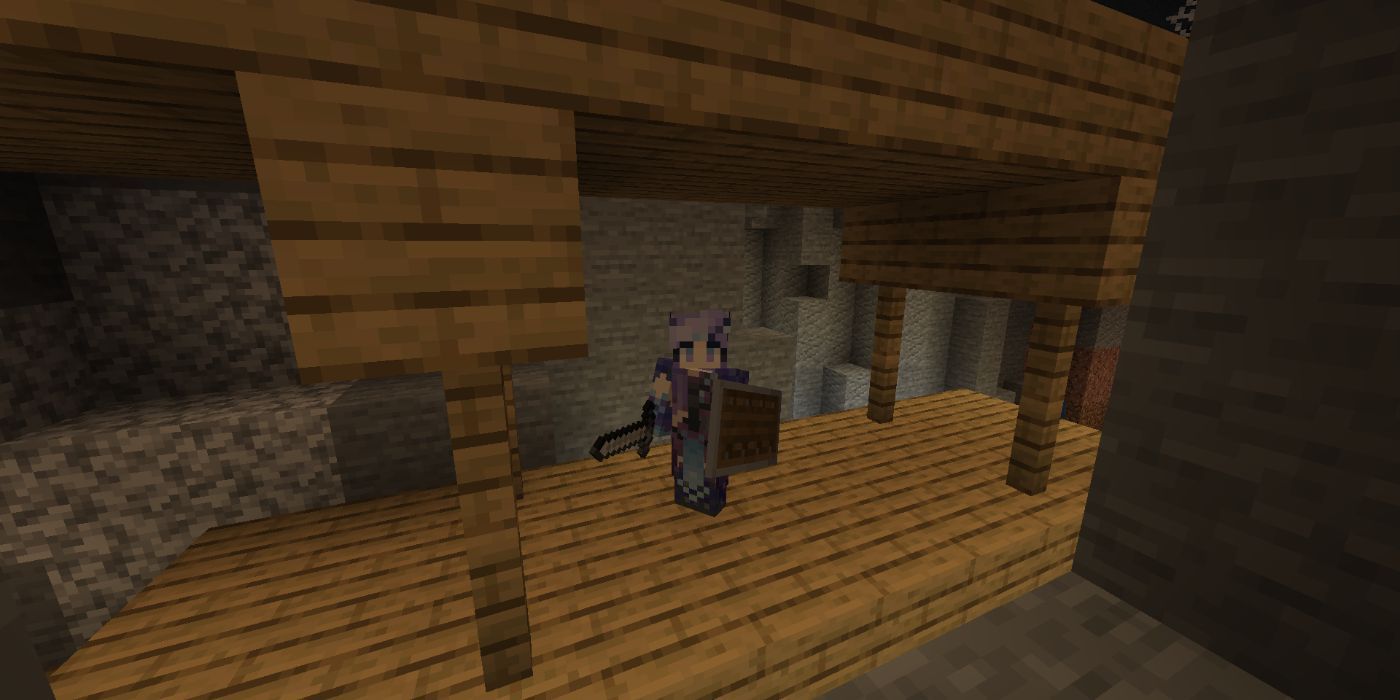 You don't need enchanted weapons or tools to conquer an abandoned mineshaft. In fact, a stone or iron sword will do perfectly fine. Pair that up with a shield, which will help you against a horde of mobs if you get swarmed. A bow isn't suited for the narrow, low-hanging corridors of a mineshaft. 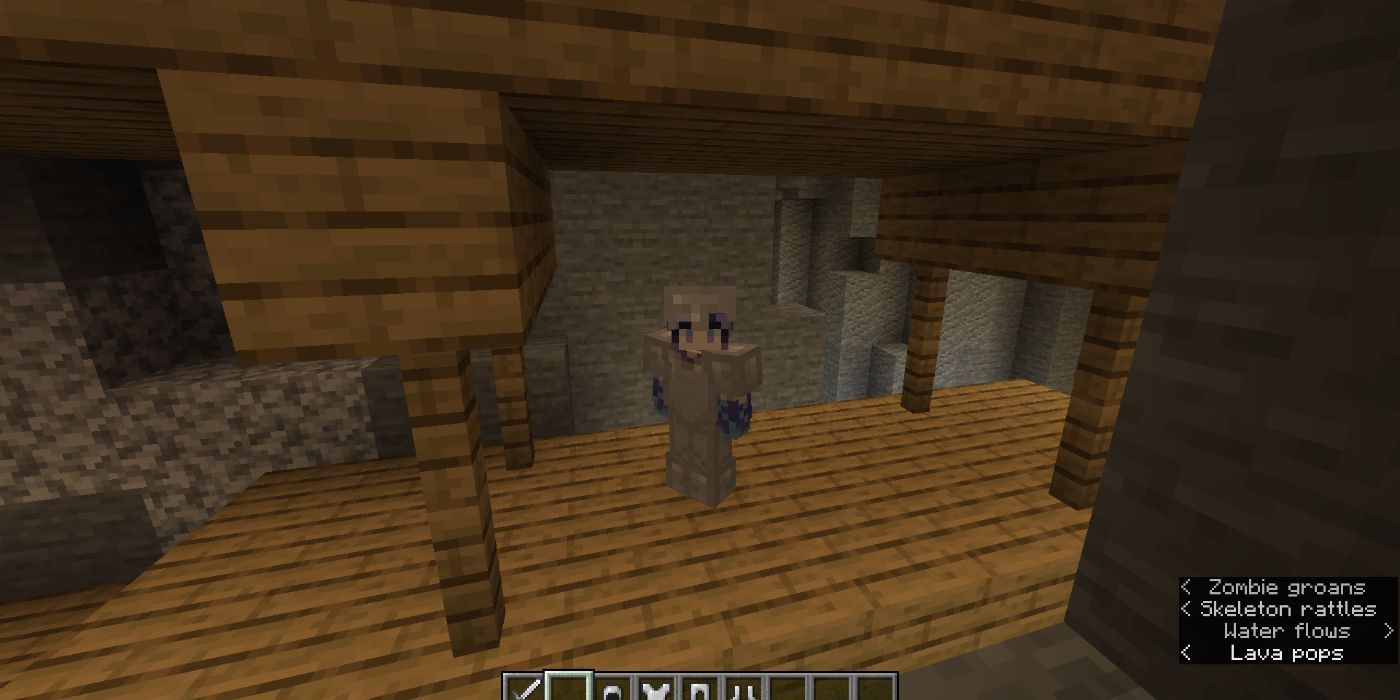 You'll want to have at least some type of armor before going in. Leather, chainmail, and iron are all great options. Leather armor is most likely the easiest to find in shipwrecks or by slaying cows and then crafting it yourself. However, full iron armor will give you the best and cheapest protection early on. 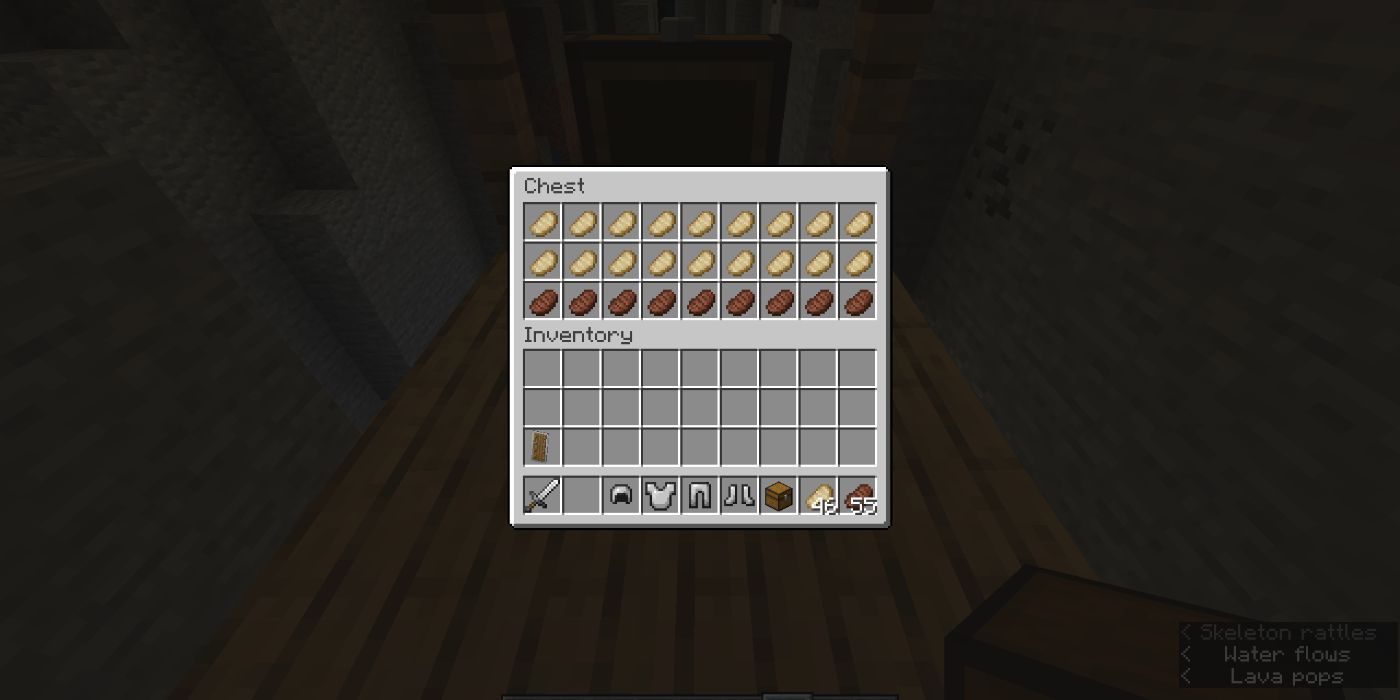 In order to survive hours upon hours of adventuring and caving, make sure to prepare plenty of food. At this point in the game, it's unlikely you'll have other consumables like potions or golden foods. If you do, feel free to take them along. Just having a stack of 20 food items, like steaks or pork chops, is the best approach. 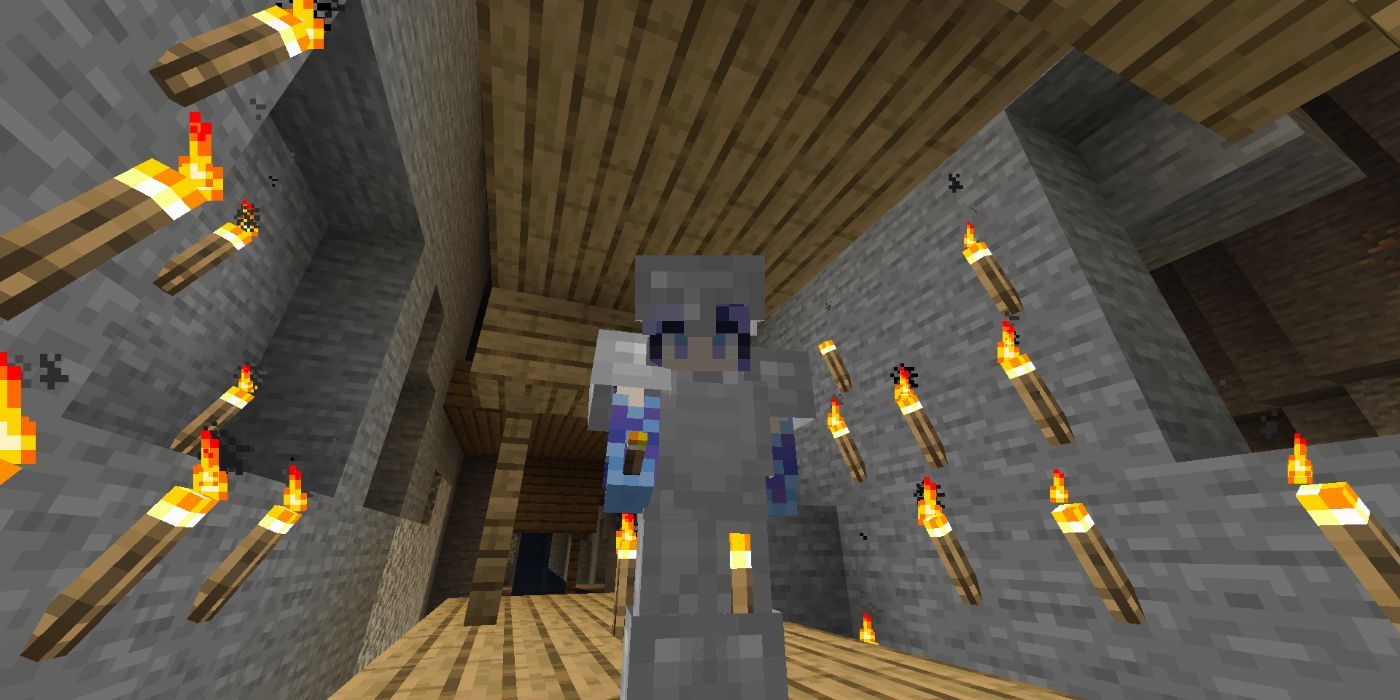 Since abandoned mineshafts are deep underground, you'll want to bring along stacks upon stacks of torches to light your path. This will also ensure that mobs will stop spawning.

Bring along your regular tools, such as pickaxes for ores and axes for wood, so you can use the naturally spawned wooden planks to make more sticks for torches. You can also bring a bucket of water in case you run into a lava pool. 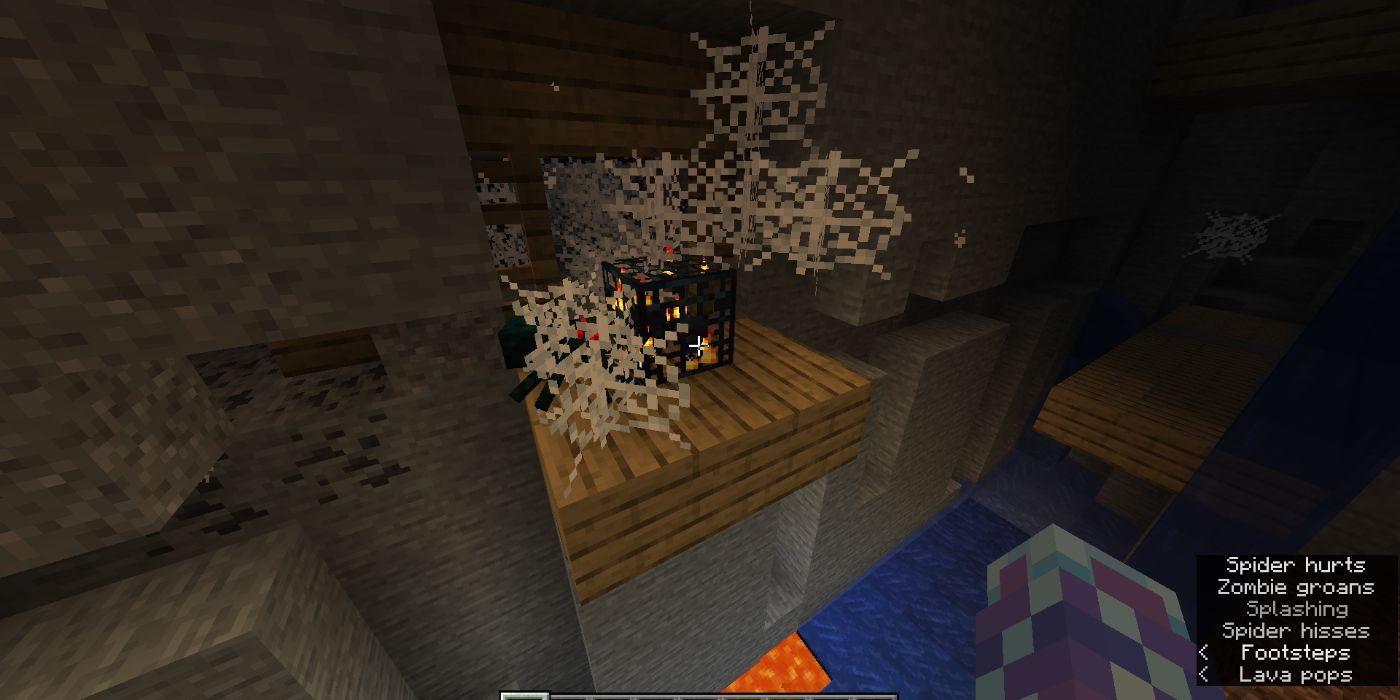 The hardest part of conquering an abandoned mineshaft isn't about finding one or fighting some of the regular mobs like zombie variants, skeletons, and creepers. The challenge comes from the unique cave spider mob that inhabits these mineshafts. There can be several cave spider spawners scattered around, usually encased in a lot of cobwebs. 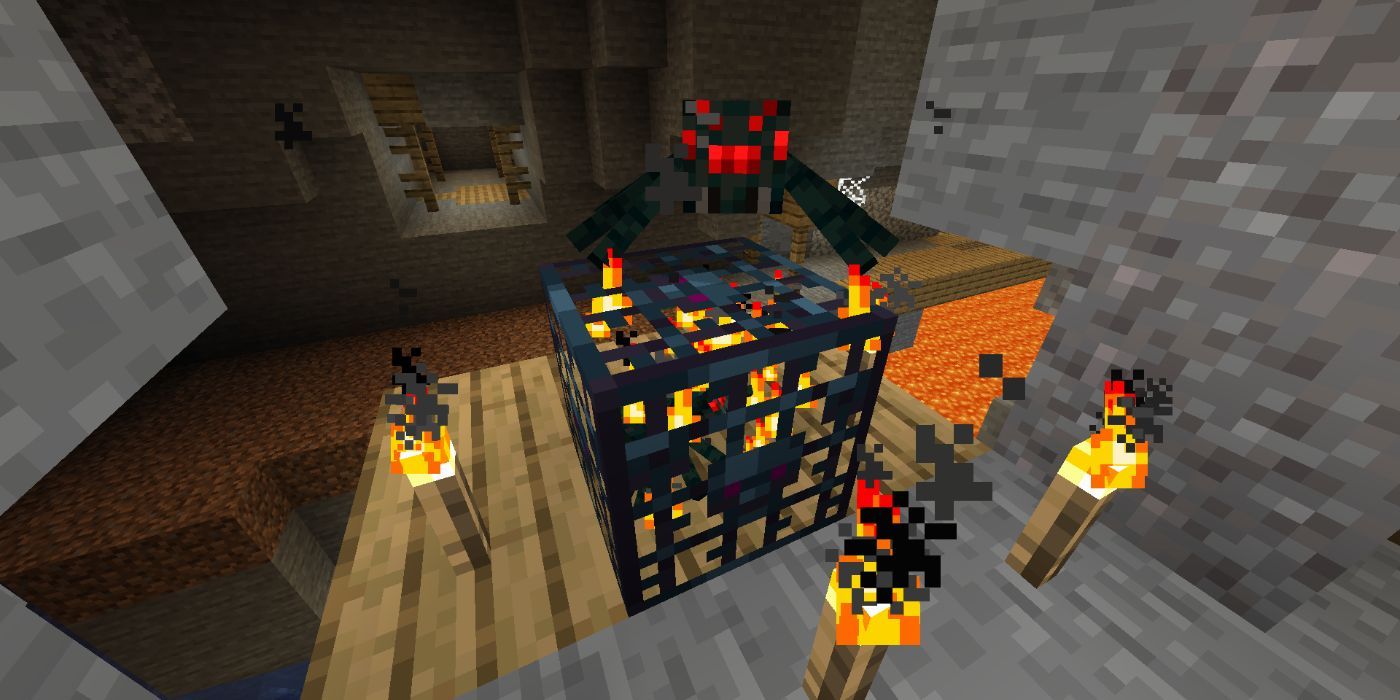 You have two options when it comes to the actual spawner itself: either you destroy the spawner and take the experience points, or you clear the area around it and place torches around to stop the spawner from working. That way you can use it later for experience points, although spiders are difficult to farm due to their small size and ability to climb walls.

There are still a few ways to make a spider spawner work. Cave spiders, in particular, are the easiest early-game spawners to farm since most of them often spawn in close vicinity of one another. For a good tutorial on cave spider farming, check out Kmond's tutorial on a simple design. 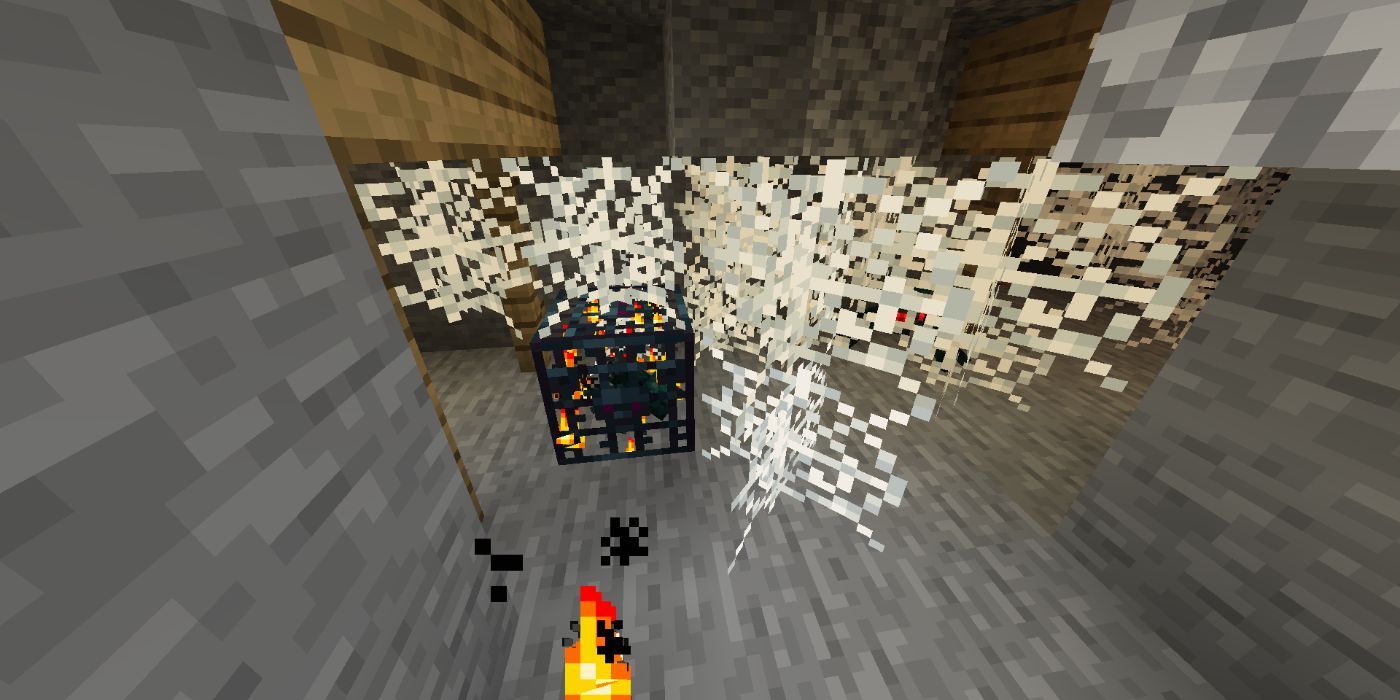 The cave spiders themselves are smaller than regular spiders. They can fit through a one-block wide space that's half a block tall, which makes them insanely hard to evade. They deal one heart of damage and inflict a Poison status for seven seconds in Normal difficulty. In Hard, they deal one and a half hearts of damage, and their Poison status lasts for 15 seconds. For Easy, they only deal pure damage worth one heart and inflict no Poison status. 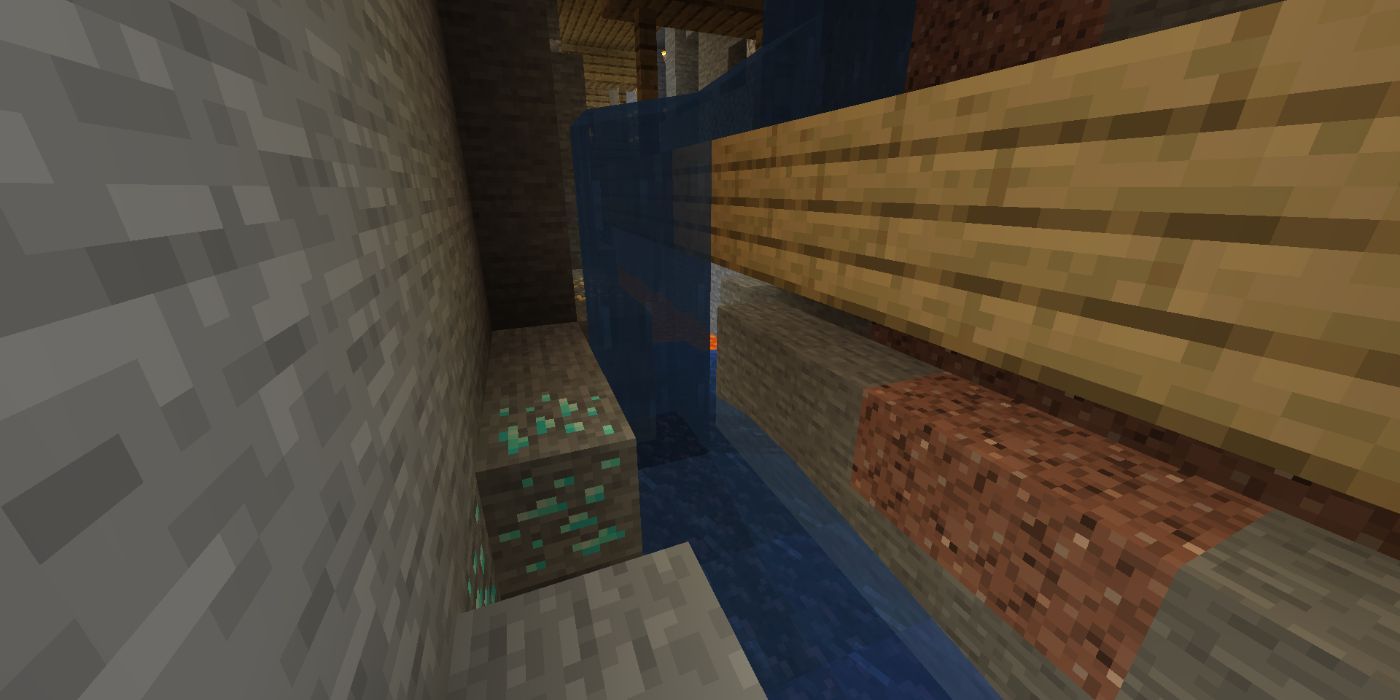 Mineshafts are ideal for finding ores. The hallways can expose a ton of ores for you to mine easily, and they can even be revived into full-fledged working mineshafts thanks to the abundance of rails already placed down. However, multiple chests can be found inside minecarts lying around. Here's the best loot you can find: 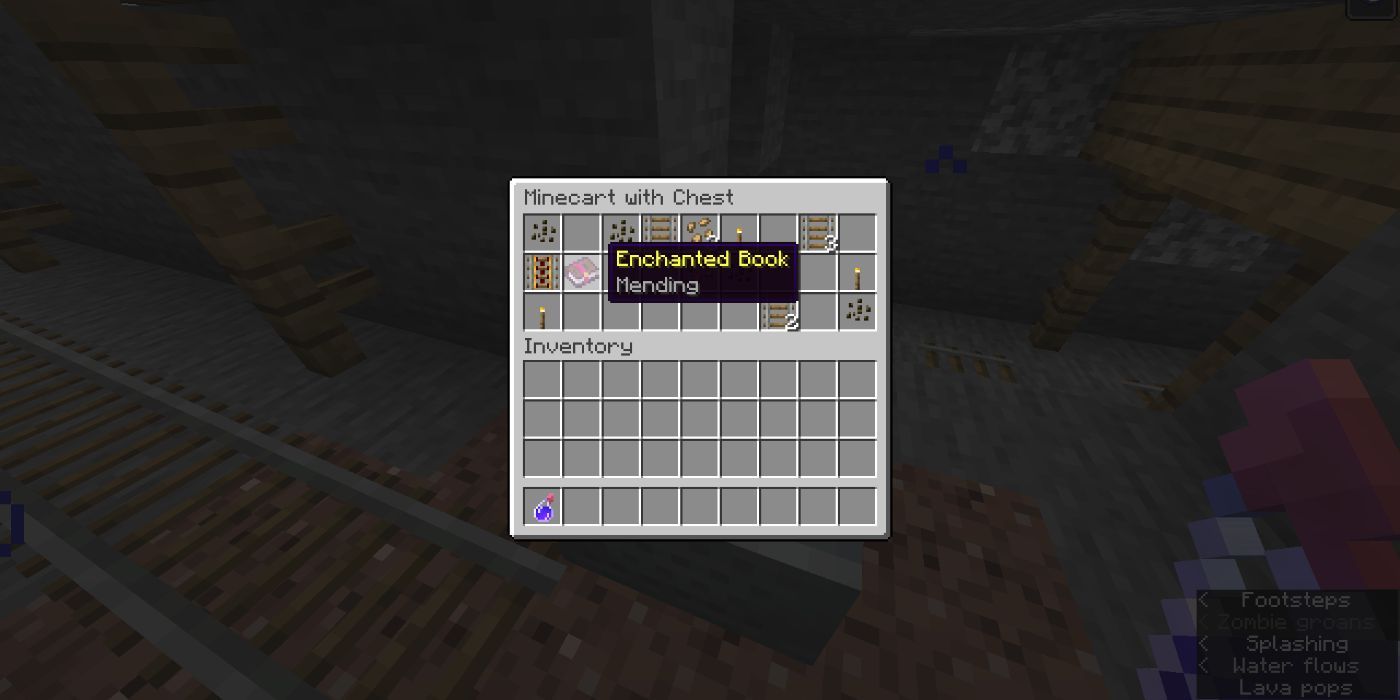 *With the Caves & Cliffs: Part I update, Glow berries were also added to the list of spawns inside a mineshaft. They spawn in chests on a minecart – this is the only way to obtain glow berries without having to find or plant cave vines. This update also made it so mineshafts could spawn inside larger caves and made it impossible for cobwebs to spawn suspended in the air in a mineshaft. And, once the second part of the Caves & Cliffs update was released, the first room of a mineshaft stopped generating with a dirt floor.