Mojang’s Stockholm headquarters are a shrine to its biggest game, but in a few moments it’s going to somehow get even more Minecrafty. I’m handed an iPhone and directed to point it at a pool table. I do, and suddenly a three-dimensional Minecraft building springs to life on the screen. As I circle around and walk closer and farther, the model seems fixed in place – I can even peer inside the windows and see villagers wandering around within. This is Minecraft Earth, an augmented-reality project that combines elements of Pokémon Go-style exploration with one of the biggest game franchises on the planet.

There’s a lot to cover, but the essence of Minecraft Earth is divided into two main sections. Using a map interface (themed, of course, to look like Minecraft), players are encouraged to walk around their neighborhoods and other real-world locations to complete tasks. Those tasks unlock blocks, which can then be used to create Minecraft creations in a free-building mode – either alone or with other players.

“The important thing to think about is not only is it a free-to-play Minecraft in AR, it is the full Minecraft experience,” says Brad Shuber, art director for the Microsoft team that’s developing the game in Redmond, Washington. “We didn’t build a new Minecraft to fit AR. We didn’t reduce it. We didn’t take it away. We didn’t remove features. It is the game you know, the features that you’re used to – the mobs, the landscapes, the redstone – all those things are here for you to use.” And, because you’re probably wondering, Microsoft answers the question of whether Minecraft Earth will have loot boxes with an unequivocal “no.”

It’s not flawless, but the demo is some of the best-looking AR tech I’ve seen. The structures seem rooted in place convincingly, without most of the weird jittering and flickering that can often destroy the illusion when you walk around the virtual objects. The demo uses a scannable QR code, but the actual game will rely on Microsoft’s spatial-anchors technology, which Shuber says enables devices to better and more accurately simulate interactions with virtual objects. That’s vital, since that illusion is a fundamental part of the experience.

In a demo reel, we see simulated versions of some of the tasks players will be able to participate in, which are called Tappables. You might see a mining opportunity a few blocks away. When you get there, a section of the pavement in front of you convincingly looks as though it’s made from Minecraft blocks. Tapping on your screen breaks them apart with your trusty pickaxe, and the resources are added to your inventory. In the trailer, the participants peer down into a newly revealed abyss and see monsters below, in addition to the dizzying depths.

Shuber says the team is being extremely careful with these public events. “We’re using layers upon layers upon layers of data – and Open Street Map is just part of it – to find places that we expect will be good places to play. So we can automatically populate large sections of areas with things.” The goal is to not only create positive experiences, but to also avoid problems that other games have had with putting points of interests in sensitive locations, such as war memorials and cemeteries.

I get to check out one of these events, where I have to take out a bunch of skeleton archers with my bow. I draw back the string by holding my finger on the button, and fire a shot by releasing it. It’s simple, but still satisfying to watch the enemies shatter with my attacks. Afterward, I’m rewarded with some new blocks.

You can think of these blocks as a giant chest of Lego pieces. The more you have, the more options you have for building. They’re not consumables, but you can’t use the same blocks simultaneously. “You can always go back and get them, but you can’t use them in multiple build places; they’re a currency of blocks that once you spend them you have to reclaim them to use them again,” Shuber says. He says they were considering the idea that, once used in a build, players would have to physically revisit that site to reclaim them. Shuber says it’s a sensation that’s similar to trekking great distances in Minecraft, but that it has the possibility of being annoying for players. How it will work in the finished game is still a work in progress. 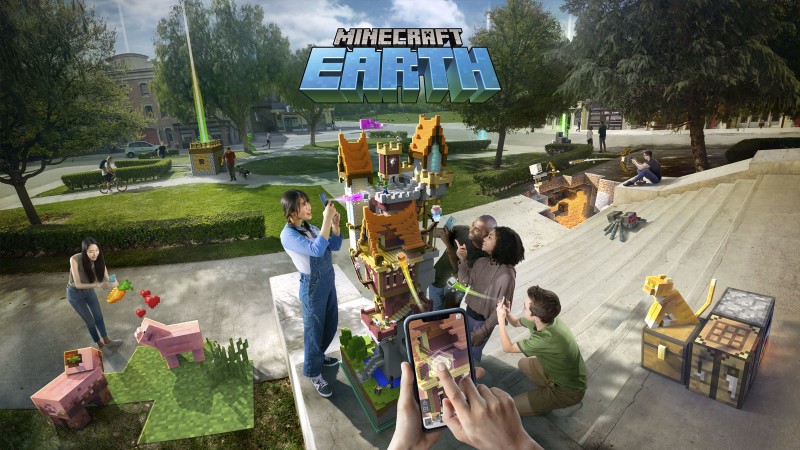 Minecraft Earth also has the concept of Build Plates, which is essentially like setting aside a flat space for free building. Here, you build your creations with your touchscreen, using the blocks in your inventory. If you want someone to join you, all they have to do is scan your phone – an interaction you have to choose to allow; strangers can’t jump into your project and start tearing things apart without that invite. Once builds are completed, they can be shared with other players.

“After my son’s soccer game, the fields cleared out and I stayed behind and placed a giant build plate in the soccer field and recorded it,” Shuber says. “It’s really cool. It’s funny how far back you have to get back with some of the larger builds, but when you’re looking at the sky and you see Minecraft clouds floating through the real sky and the lighting just is right, it’s a really believable experience.” During my hands-on demo, I got to see some of the subtle details, such as seeing other players from behind flowing waterfalls or stepping on a pressure plate and watching a door slam shut in their faces.

The team is adding some new mob variants, too, such as a muddy pig. It comes with a special mud block, which allows the pig to wallow around and get nice and dirty – to the point where a flower is able to grow on its head. 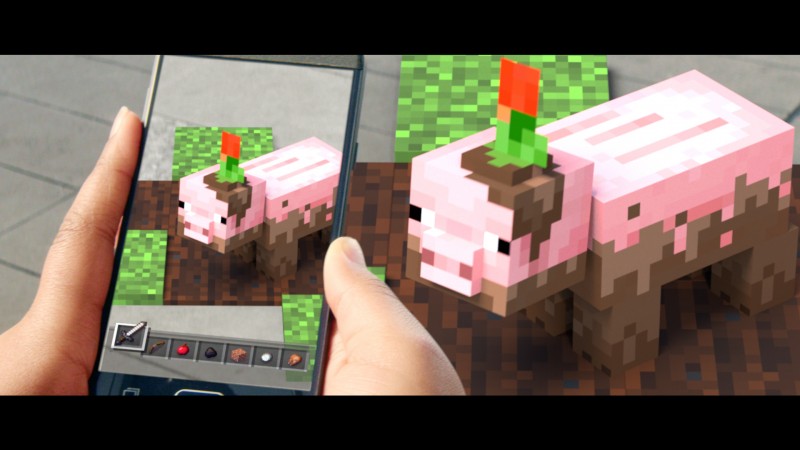 In the video, we see someone “fishing” near a body of water, which made me wonder how closely the real world and Minecraft Earth’s version connect. As Shuber says, these things can get complicated. For instance, do seasons matter? “When we first started, that was our thought. How cool would it be if you had to travel to a snowy place to get snowy blocks? You’re really reinforcing that sense of travel. But funny enough, we thought what if there’s a kid in Alaska who never gets to see the desert? Man, that would suck, and it wouldn’t be very Minecrafty. The goal is that as we introduce new biomes, the map changes over a period of time, whatever that period is. It might be desert today, it might be snowy tomorrow, it might be plains the next day, it might be flowers the next day after that. So that the world is coming to you constantly. But we always have that option to decide if we want to do a special thing at this time and this place.”

And then there’s the obvious question about monitoring what people build. What’s to prevent someone from building a huge, inappropriate structure and leaving it in public? “We will have places we determine are good places for community placed builds, and that’s where you can leave them permanently, but you always have the option of placing them wherever you want,” Shuber says. “And we’ll lean on the community managers that we already have who have lots of experience filtering through community builds and photos and interactions to help manage those things.”

Minecraft Earth is coming to iOS and Android devices this summer, though there’s no concrete date attached to its release at this point. There will be a closed beta before its release, and participants will get a special Minecraft Earth skin after registering. Shuber says the focus is on rolling the game out slowly, to make sure that they’re able to deliver something that’s a positive experience for everyone. Hopefully, we’ll have time to explore before having to put on our boots and winter coats.