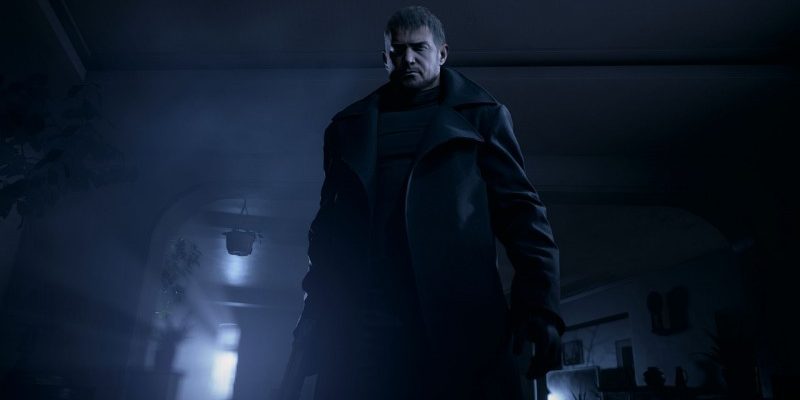 We’re just a few days out from the launch of Resident Evil Village. The follow-up to Resident Evil 7 already made a big impression on our most recent cover, but we still took the coverage online, showcasing how upgrades work, giving an environment tour, spotlighting new enemy the Lycan, and diving into how Capcom is balancing action and horror. However, one thing we haven’t discussed in more depth is the story and the role a certain iconic character plays in it.

As one of the original survivors of the zombie outbreak in Raccoon City, Chris Redfield has been there since the beginning of the Umbrella Corporation and the T-Virus’ rampage. A staple of the series, he’s continued to protect people by traveling the globe to stop the spread of various bioweapons, growing in both strength and know-how. However, that doesn’t mean this all hasn’t taken a toll on the man. After witnessing horrific events and dealing with difficult losses, Chris Redfield has been through a lot of trauma. The gray in his hair now shows; he’s put a lot of miles on his body, and who’s to say he hasn’t changed his morals and ideals along the way? Or, maybe the bigger question is, what would make him do so?

Capcom is teasing a very different role than we’re used to for Chris in Resident Evil Village, making him appear more heartless and evil. Trailers showed him killing protagonist Ethan Winters’ wife and kidnapping his daughter, leaving fans to wonder if Chris had fallen off the deep end. Or was he simply doing what he believed was for the greater good? It’s a huge turn for Chris, who originally rescued Ethan and Mia from the Baker plantation. But as we know in the Resident Evil world, things aren’t always what they seem, and there must be a reason for Chris’ change of heart.

Capcom confirmed discovering Chris’ true intentions is a big part of Ethan’s journey.  “He definitely plays a very significant role in this game,” says director Morimasa Sato. “He does this horrific act. One of the big mysteries as you play through the game is, ‘Why did he do that?’ He has a pivotal role in one of the major mysteries in the game.”

This is also the opportunity for us to see how Chris has grown through the years. He’s always had a tough exterior and played the role of the brawn well, but Capcom sees potential in going beyond that and changing our perception of him. “He is a character that has appeared so many times, in so many different Resident Evil titles,” Sato says. “It’s one of those things where we want to see the character grow. We want players to be able to see how he has progressed and come up with reasons or speculations like, ‘Okay, this is why he’s changed’ and ‘These are the reasons why he may have done the things that he’s doing now.’”

When we straight-up asked Capcom if Chris is the villain of this game, the response was telling and has us intrigued for what Village will reveal about the character. “This title really taps more into the dark side of Chris Redfield, the darker side of who he is,” Sato confirms.

That sounds like a pretty good fit for a horror game to us, and we’re curious just how far a “darker” Chris will go. Thankfully, we won’t have to wait too much longer to find out with Resident Evil Village hitting on Friday.

Do you think Chris Redfield will appear on the side of good or evil? Let us know in the comments below!