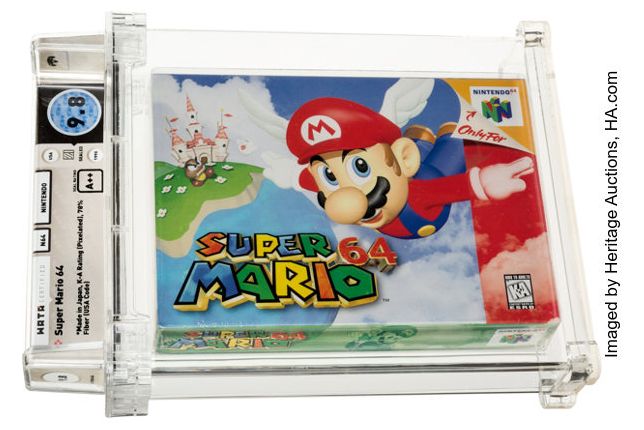 A pristine copy of Super Mario 64 on the N64 has sold for a staggering $1.56 million, breaking a record set only two days earlier.

When the N64 console was first launched there was much criticism about the cost of its games. Because they were released on cartridges rather than CD-ROMs, like the PlayStation 1, they were much more expensive: around £55 to £60 in the UK and $50 in the US.

That was a lot of money back then (adjusted for inflation around $70) but if you bought one of the earliest copies of Super Mario 64 then you now have a chance to make a tidy profit on it… of over £1 million.

The Heritage Auctions website reveals that an early copy of launch game Super Mario 64 has sold for a staggering $1,560,000, which works out as £1,125,095. The craziest thing is though, there’s nothing particularly special about it other than it’s in pristine condition.

Copies of NES games such as Super Mario Bros. and The Legend Of Zelda often sell for large amounts because they’re early editions, distinguished by slightly different packaging details.

The copy of Super Mario 64 is from the first wave of stock in 1996 but other than that there’s nothing rare about it beyond the condition, which includes an intact plastic seal.

The auctioneers claim there’s less than five other copies of the game in similar condition in the world, so if you’ve got a scuffed up copy with a beaten up box and scribbled notes in the manual it’s not going to go for the same amount (a quick check on eBay shows the going rate for the cartridge alone is less than £20).

This is now officially the most ever paid for a video game (the $1.56 million, not the £20), but bizarrely the previously record was only set two days earlier.

The fact that there have been two major sales in such quick succession suggests more are likely on the way, with the market for retro games heating up in a similar way to collectible trading card games such as Pokémon.