MultiVersus is a game packed with intriguing characters. Most of them have some pretty notable weaknesses to accompany some of their incredible strengths. However, there are a few characters that are just sorta good everywhere. They may not be as overwhelming as some of their peers, but they can fight you competently wherever you go. Garnet is an excellent example of that archetype.

While Garnet is great for people who value versatility, she isn't the simplest character in the game. By no means will you need a post-doctorate to play her, but she has a few mechanics that are unique to her toolkit. Thankfully, we are here to explain how all of her stuff works and to point you in the direction of her most potent moves. 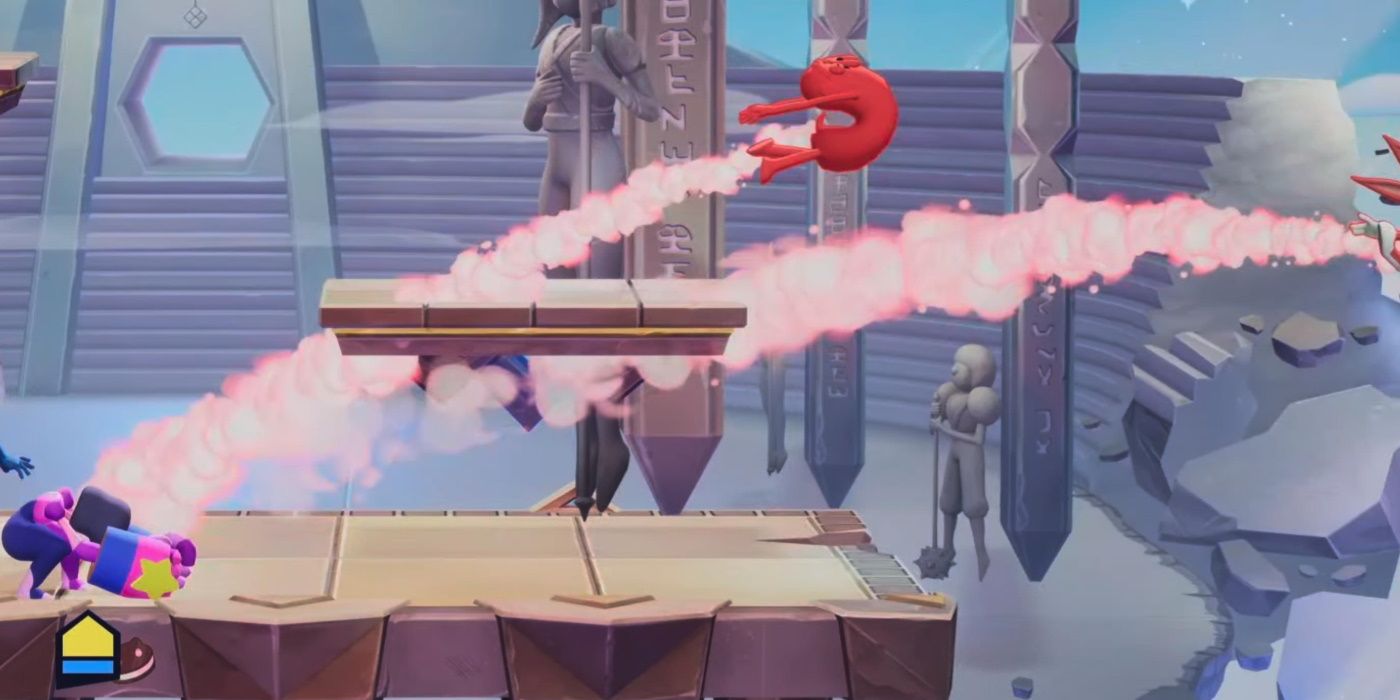 Garnet is an all-around effective fighter. While the game classifies her as a horizontal bruiser, we really think she's more versatile than that. Her vertical kit is pretty potent as well. She has a number of attacks that can effectively ring out opponents on any end of the arena. She is good on the ground, good in the air, and has some potent attacks that will help her buff her allies while debuffing her enemies. She also has great projectiles, and a number of armored attacks as well. Garnet really is the complete package!

And that isn't even mentioning how she has some of the best aerial spikes in the game. Oh, and did we mention that she has some unique ways to neutralize projectiles? Because she does. Once you learn how to use her moveset effectively, you will be able to efficiently fight your enemies wherever they go. 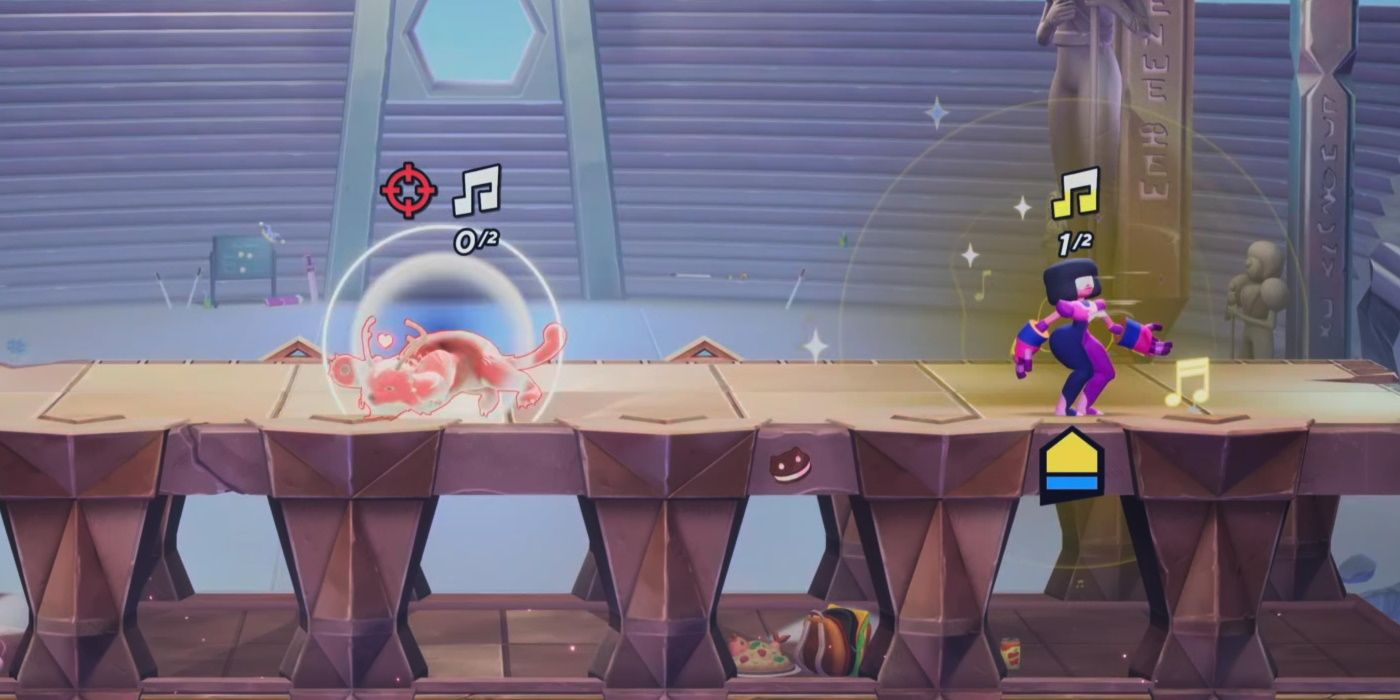 First and foremost, you are going to want to bust out her Stronger Than You attack at the beginning of the battle. It has no recovery, so if your opponent starts rushing toward you immediately, you can cancel right out of it. Moreover, if they try to toss projectiles at you, it will stop them in their tracks. Throughout the battle, during little down moments, try to keep your rhythm topped up. It will make a big difference for your team if you can keep those buffs active. 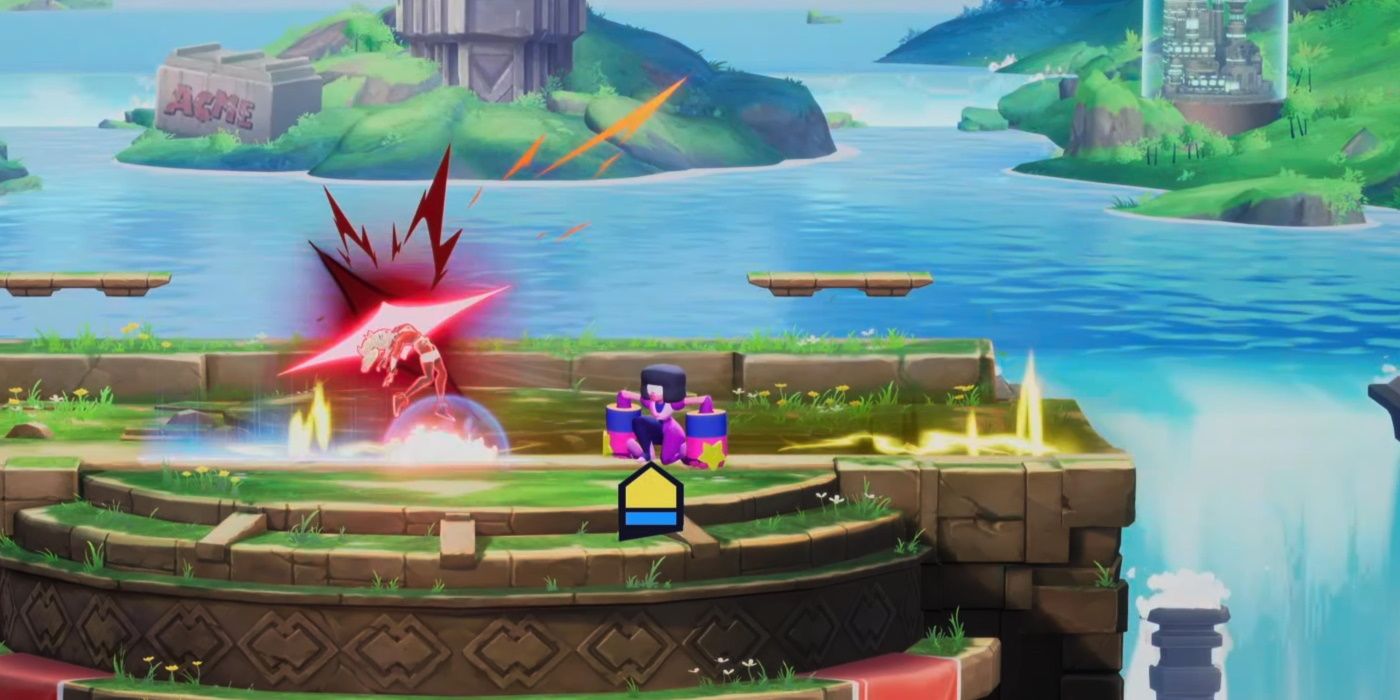 Now, what you are going to be looking to do is to engage with your Crystal Combo (use the armored finisher), and get your Spark Of Love down regularly. The spark will help buff you and your partner while giving your opponents shock. So, firing it where your opponents are, is typically pretty beneficial. The armored hit on your Crystal Combo will find its mark more often than not and will rack you up some KOs. If your enemies are teaming up on your ally, charge up a quick Shocking Slam. You can often grab two of them at the same time. Remember that this attack will pop them up and toward you, so follow up with your Double Jab (you probably won't have time to charge it).

Once your opponent's health starts getting lower, you will want to stop using the armored followup of your Crystal Combo, and start using the up ender. At a certain point (usually when your enemies are around the 60% point, but this will depend on their weight), the up ender of your Crystal Combo will start to set up your Flying Crossarm. You can get some earlyish kills with this sequence. 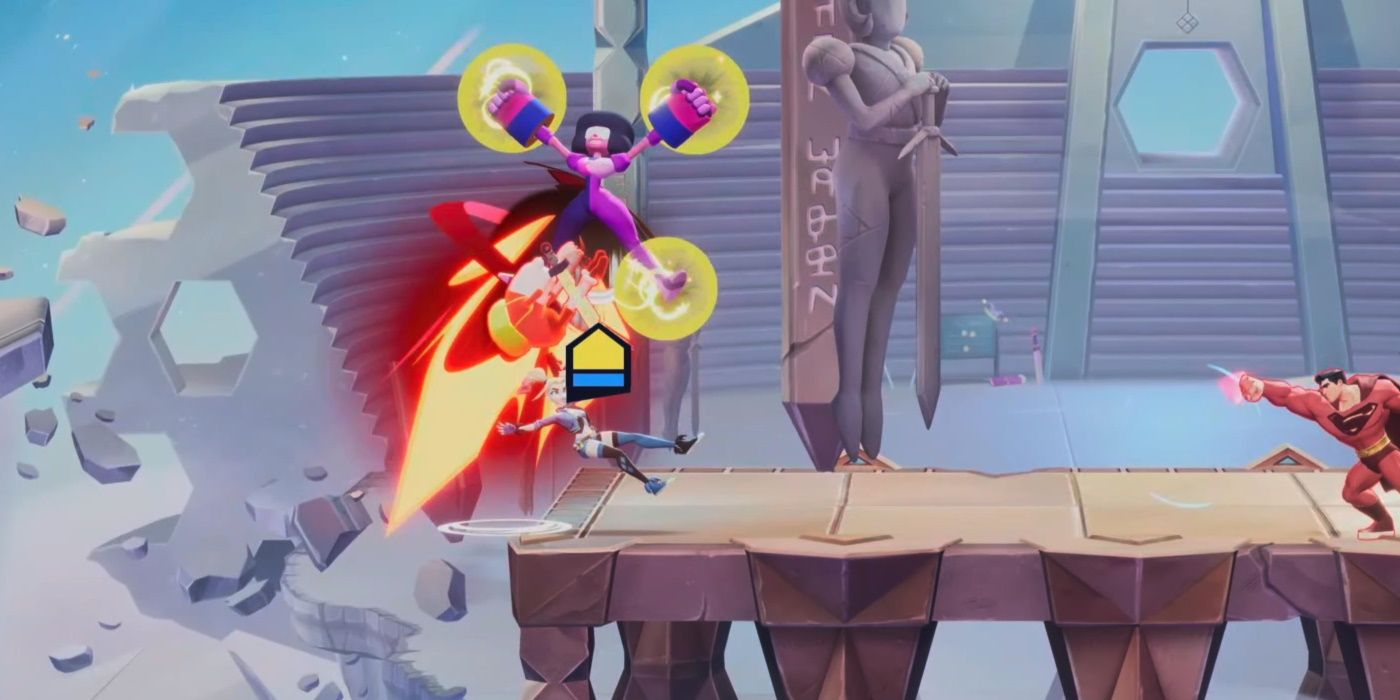 When edge guarding, you have a number of pretty great tools. If they have used all their jumps and dashes, and they are floating down to land on the edge of the platform, you can hit them with a well-timed Socking Slam. You can also charge up your Double Jab, which hits well above your head so will often finish them off, or you can meet them in the air with your Flying Crossarm. If they are making their way back and are horizontally aligned with you, you can crush them with your Rocker Punch projectile attack. Finally, if they are clinging to the edge below, your Starburst will absolutely mess them up and spike them to their death. 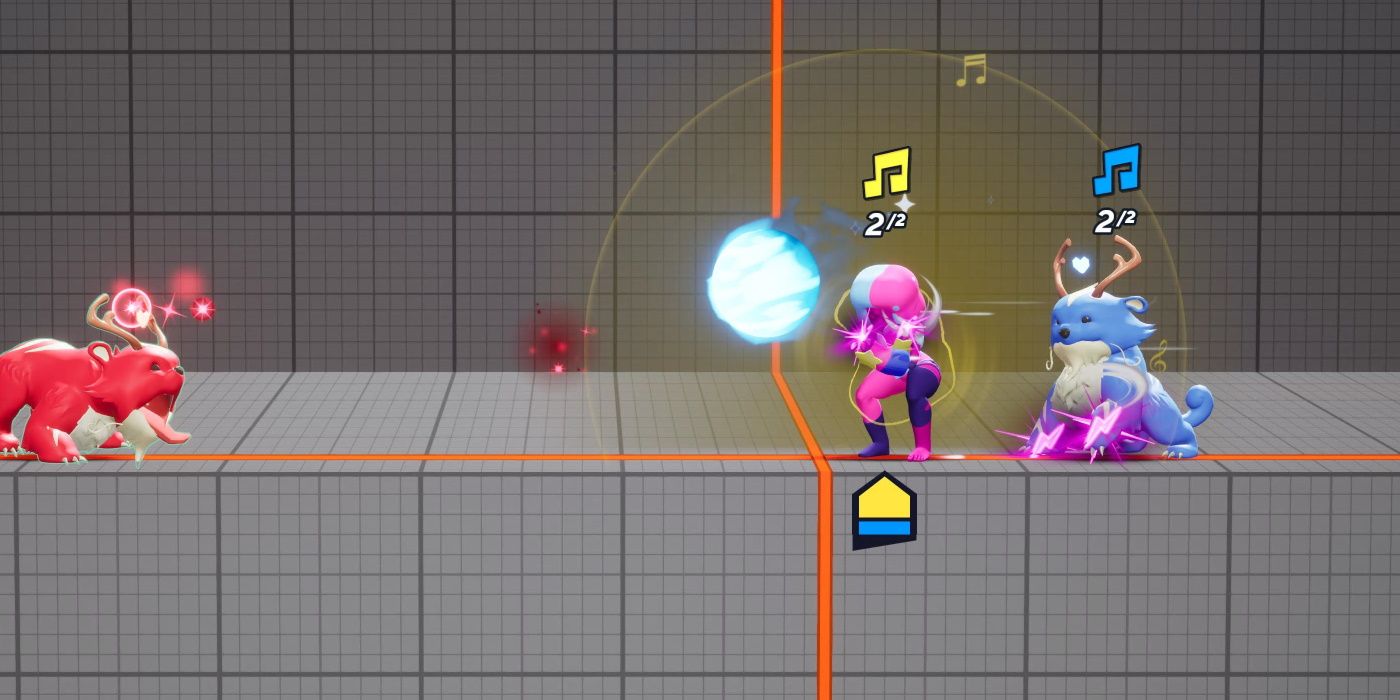 One of the best parts about Garnet is that she helps her team by just playing her game. When you buff yourself with Stronger Than You, you also buff your partner. When you put down the spark, that will also benefit your partner. You're going to want to be doing all that stuff anyway! The only specific tool for helping your partner would be the Gem Dash. If your partner holds the star you put down, you can zip over to them and refresh all their stuff.

One other opportunity to help your ally is if they are engaging in a projectile war. Remember, your Stronger Than You attack creates a bubble that will instantly stop every projectile being fired at you, but your partner's projectiles will sail right through it. 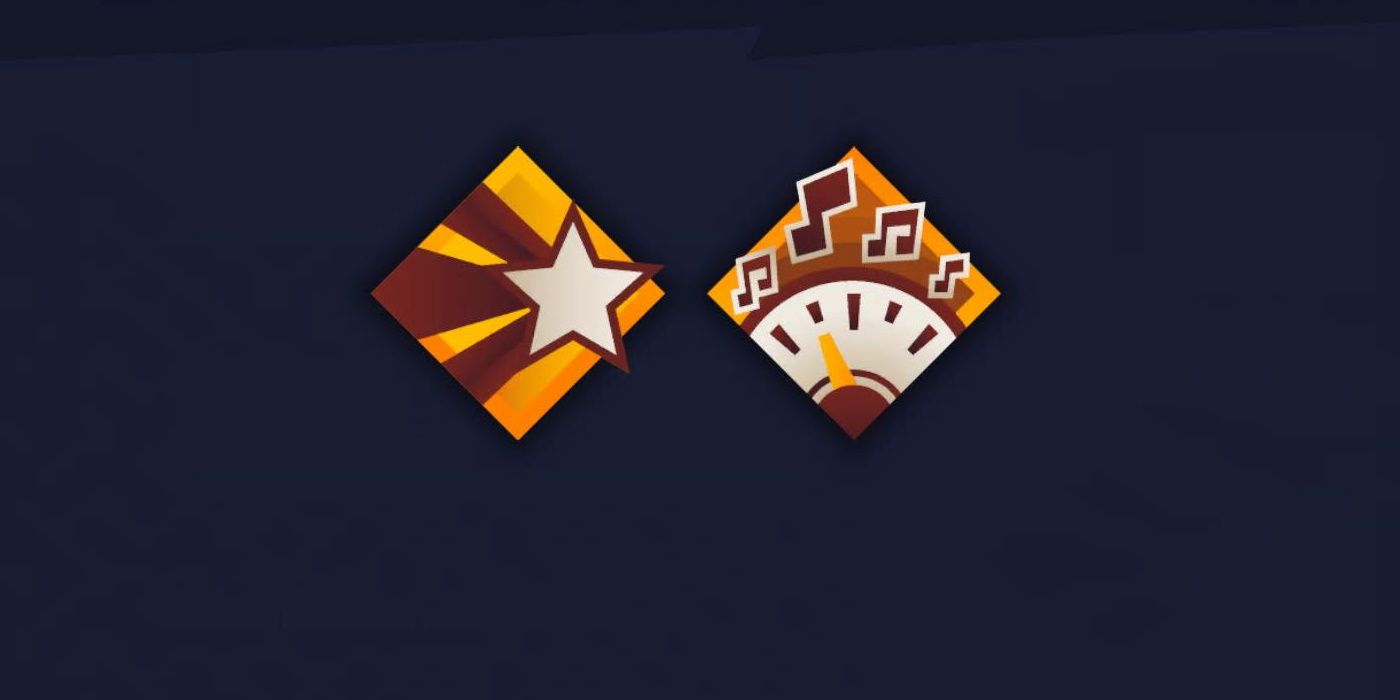 Garnet has two Signature Perks and both of them are pretty rad. Electric Groove will give you a charge of rhythm when you shock your opponent, and Marker will make it so your Rocket Punch leaves the star marker behind (allowing you to zip to it). Electric Groove is a no-brainer buff. You use a lot of lightning-based attacks when playing Garnet, so this will ensure that you are constantly receiving the potent Rhythm buff. The other is super neat and can be used to create some very tricky setups. It takes any preplanning out of having to use your Gem Dash.

This is another situation where you really can't go wrong with either, but the constant flow of Rhythm is definitely a huge boon that can be used to make your life easier with zero effort. So, Electric Groove is the easier of the two to implement effectively, though you can do some really tricky stuff with the Market perk, so more creative players will probably favor that one.