Cato Networks, a secure access service edge (SASE) company developing products to manage networking equipment, today announced that it raised $200 million at a $2.5 billion post-money valuation, bringing its total capital to $532 million. The round, which was led by Lightspeed Venture Partners with participation from Greylock, Aspect Ventures, Acrew Capital, Coatue, Singtel Innov8, and Shlomo Kramer, will be put toward sales, technology, and business growth, CEO Shlomo Kramer said in a statement.

SASE, a term coined by analysts at Gartner, combines a software-defined wide-area network (SD-WAN) with services including traffic prioritization, antivirus, VPNs, firewalls, and data loss prevention delivered from the cloud to the network edge. (A SD-WAN uses software-defined network technologies such as communicating over the internet using encryption between an organization’s locations.) That’s as opposed to the common practice of backhauling traffic over long distances to corporate datacenters for security, which can add latency when users and their apps are largely remote.

Tel Aviv, Israel-based Cato Networks, which was founded in 2015 by Gur Shatz (a former cofounder of Incapsula) and Kramer (a former cofounder of Check Point and Imperva), offers a SASE platform designed to optimize and secure app access for users and locations, integrating with existing datacenters. In 2016, the company launched its first generally available service, Cato Cloud, followed in 2017 by an intrusion-prevention-as-a-service product.

“Cato is at the forefront of SASE transformation,” Kramer said in a press release. “Large enterprises are deploying Cato as their global network to reap the operational and business benefits of Cato’s proven and mature SASE platform. Cato is rapidly expanding its service capabilities, global footprint, and sales and marketing teams, while preserving our unique DNA of agility, simplicity, and ease of doing business that is so valued by customers and partners.”

With SASE, network and security services are typically provided at points-of-presence (PoPs) located as close as possible to users, branch offices, and cloud services. The cloud-to-edge model is meant to simplify the delivery of SD-WAN and security capabilities to edge devices while enabling IT departments to implement different policies for different connections and sessions originating from the same source.

According to Lightspeed Venture Partners partner Yoni Cheifetz, SASE is being driven by the rise of mobile, edge, and cloud computing in the enterprise at the expense of the local area network and corporate datacenters. The global SASE market is projected to reach $5.42 billion in value by 2027, up from $2.66 billion in 2020, according to Valuates Reports.

“Cato has seen an amazing adoption of its SASE platform by increasingly larger enterprises,” Cheifetz said in a press release. “What started as a disruptive innovation and a novel idea, is now a fast-growing business that is at the heart of enterprises’ mission critical operations.” 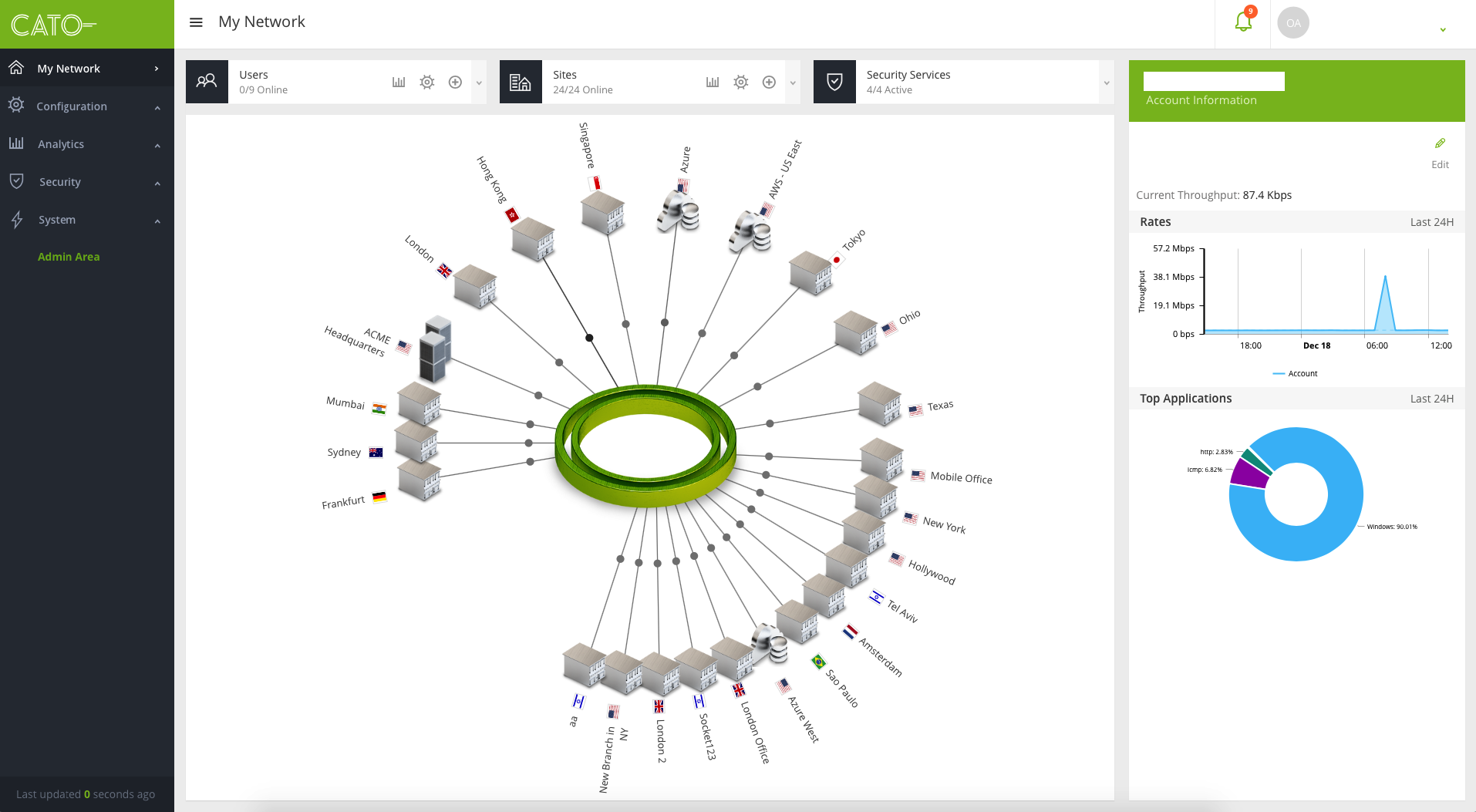 Cato connects branch locations, mobile users, and physical and cloud datacenters in a unified network. The network is managed by a cloud-based app used to configure policies and monitor activity and security events.

Cato’s platform is made up of two parts: the Cato SASE Cloud and Cato Security Services. The SASE cloud is a service running on a backbone of interconnected more than 65 PoPs to which enterprises, datacenters, and remote users connect. Cato Security Services is a set of network security capabilities built into the network, including a firewall, a secure web gateway, and antimalware and managed detection and response technologies.

During the past year, Cato says it opened new PoPs across the globe in places such as Casablanca and Morocco and increased density in Germany, Austria, and Switzerland, where it opened its 16th PoP (in Munich).

Some experts have criticized the SASE model for its lack of analytics, AI, and machine learning, as well as its potential to lock enterprises into a single vendor. For example, IDC analyst Brandon Butler believes that SD-WAN will evolve into what he calls “SD-Branch,” defined as centralized deployment and management of virtualized SD-WAN and security functions at multiple branch office locations.

But others like Scott Raynovich, chief analyst at Futuriom, a research community focused on next-generation cloud technologies, believes that SASE has massive growth potential.  “Cato pioneered SASE, creating the category before it existed,” he said in a statement. “They saw the need early on for enterprises to deliver global, cloud-delivered networking and security. It’s a vision that is now paying off with tremendous growth.”

Cato — which competes with Infoblox, Akamai, Netskope, Cloudflare, Cisco, and Palo Alto Networks, among others — claims that dozens of enterprises spend more than $250,000 in annual recurring revenue (ARR) with it today, an increase of 163% year-over-year. Several spend over $1 million in ARR.