The New BittBoy V3 is a handheld retro gaming emulation device that looks like Nintendo’s classic GameBoy—but has hardware powerful enough to play NES, Genesis, and even Playstation 1 games. For $70 (including an 8GB micro SD card) it offers great battery life, a nice screen, and consistent emulation. As of this writing we’re also seeing some great summer discounts. It’s a relatively easy option for those who like to take some favorite video games on the road, as long as you’re willing to deal with a few drawbacks. 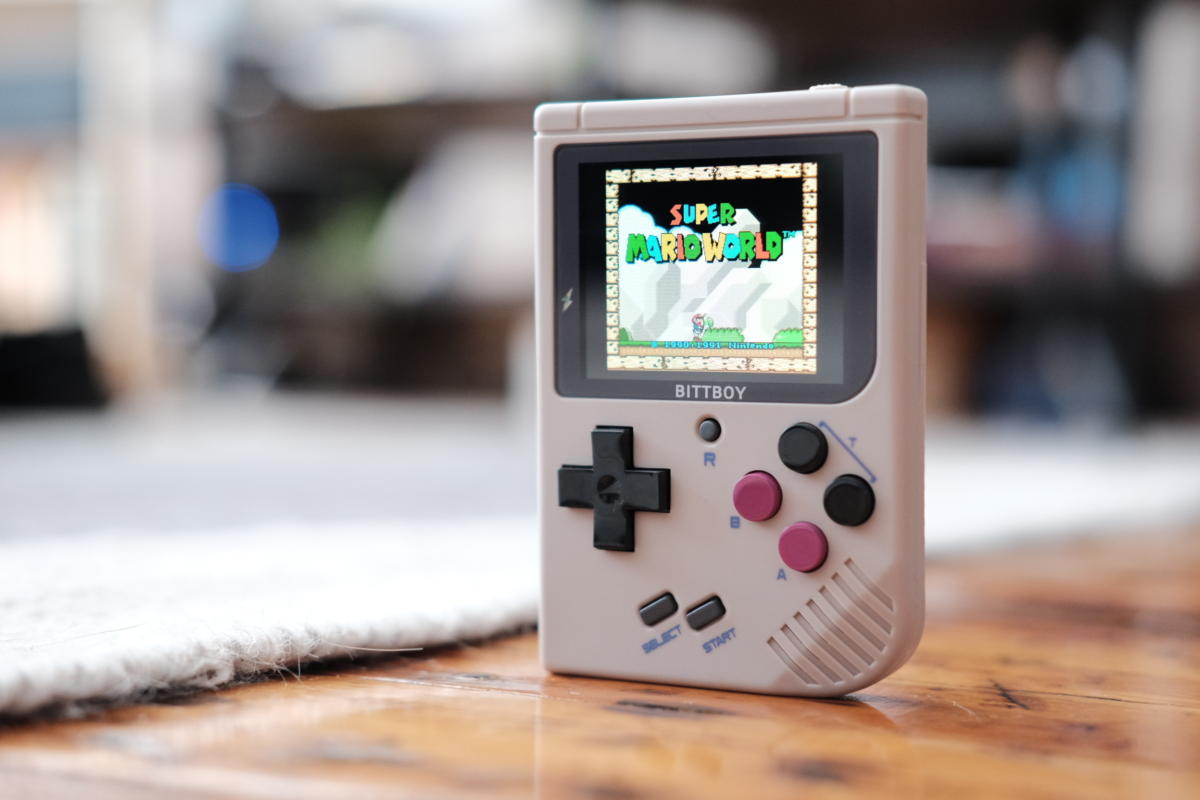 The BittBoy takes some design cues from the GameBoy. It has a similar textured-plastic feel and button placement, though it’s considerably smaller and lighter. In my large hands I find myself having to readjust often because my fingers tend to overlap in the back. On the other hand, that means the BittBoy fits in pockets and takes up little to no space in a backpack—a real treat! 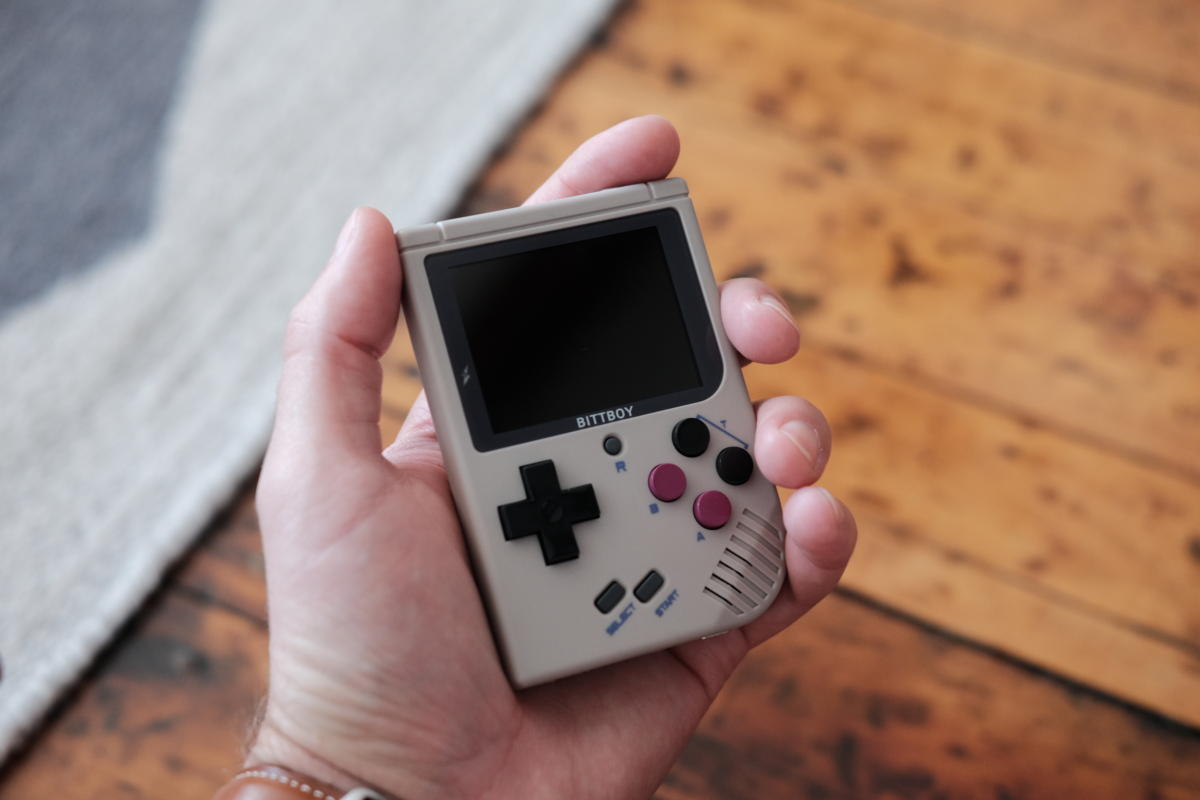 Easily fits in the palm of my hand

When it comes to battery life, the 700mAh removable lithium battery lasts surprisingly long. I get a couple weeks’ worth of playing on the train before having to recharge it via its micro-USB port. Unfortunately there’s minimal warning of battery rundown–just a teensy indicator on the home screen. If you miss that, the screen just slowly dims over the course of a few minutes, forcing you to hurry and save.

Speaking of the 2.4-inch IPS screen, it’s big enough for most use cases, is plenty bright and sharp for all sorts of viewing options, and offers great color rendition. Unfortunately there isn’t a brightness slider–instead, you have to hold down the Select button and then use two Turbo buttons to adjust it with a few steps. For the most part I left it on full-blast. 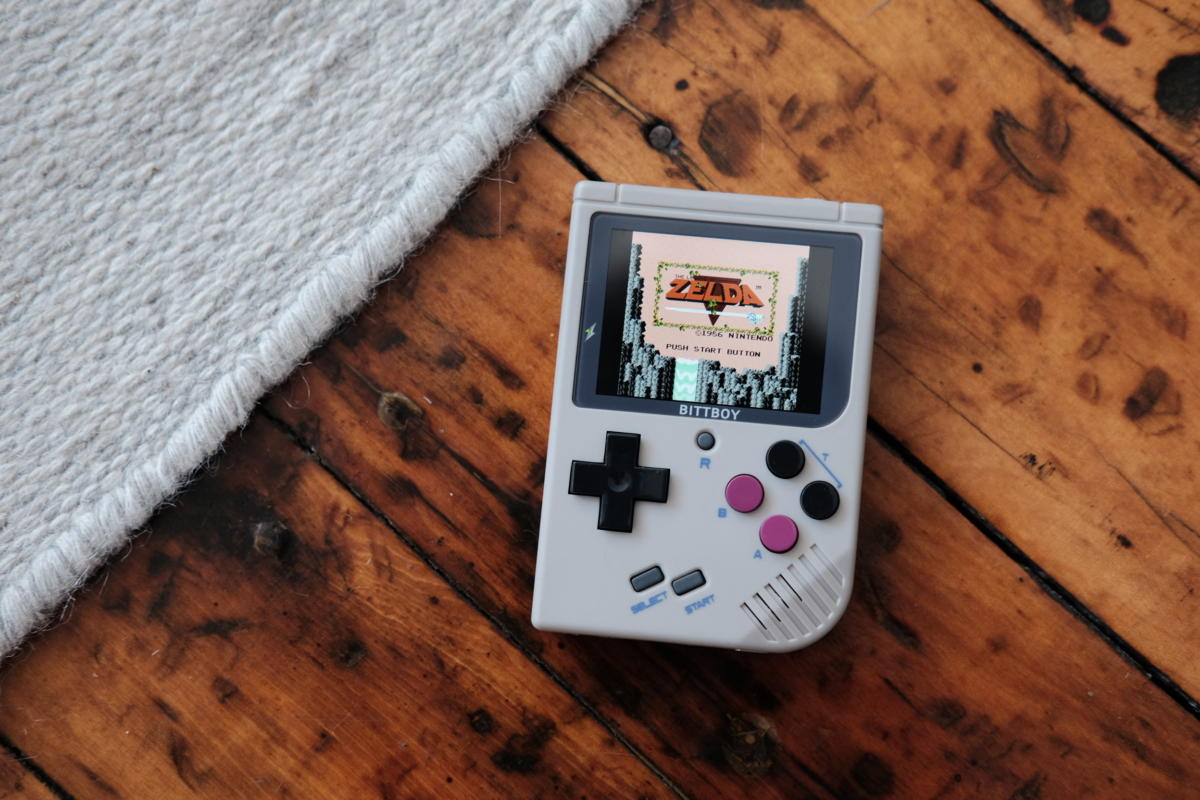 The screen is a highlight of the system

The real problem comes when having to adjust volume of the mono speaker or headphone jack using the same method, something I do way more often. You have to hold down Select and step through a few volume options with the B and A buttons. This is clunky and my least favorite thing about the hardware.

At least the feel of the buttons is fine. The d-pad is nice and smooth, with an even distribution of tension between the directions. It’s not super-smooth to roll over from one direction to another, but I wasn’t expecting perfection for the price. The face buttons have just a bit more resistance on initial press than I prefer, but there’s plenty of travel and I’ve had no problems with false positives or missed presses. 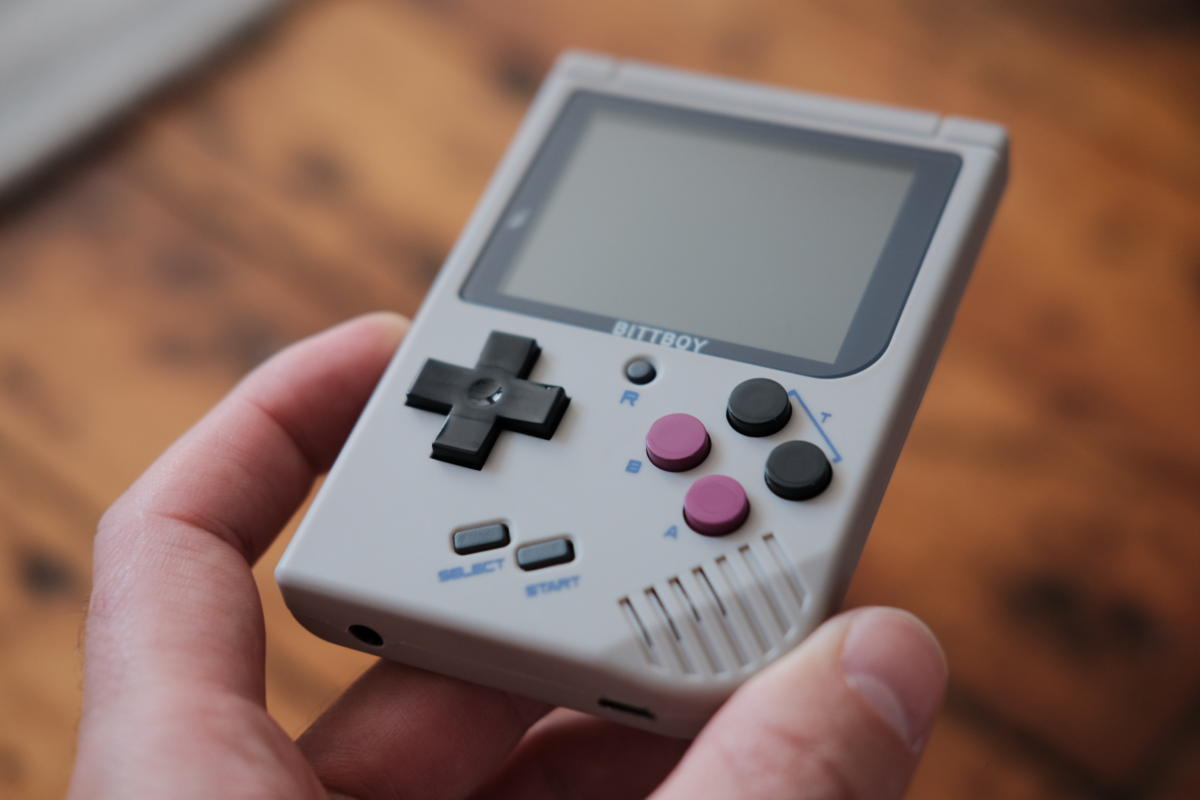 The BittBoy software support includes NES, SNES, GameBoy, GameBoy Color, GameBoy Advance, Master System, Genesis, WonderSwan, NeoGeo, and even PlayStation games via various built-in emulators. You load your ROMs onto an SD card that fits into a slot at the top. The operating system is already loaded on the device, so it couldn’t be more easy to set up and use. There are options if you want to tinker with settings to get the most out of each emulator, but for the most part I’ve stuck with the defaults. 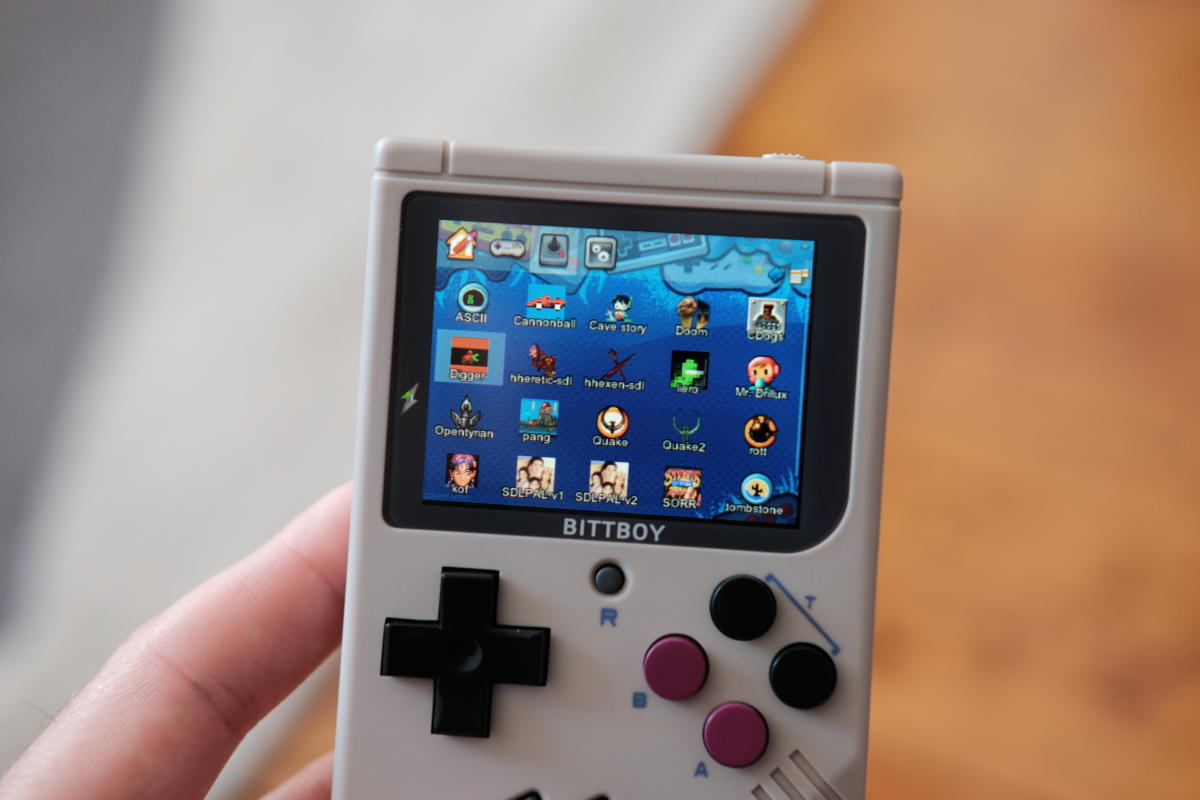 Like all emulation, you aren’t using the original hardware the games were designed for, so everything is not guaranteed to run perfectly—or at all, in some cases. But I’m personally not a stickler for a perfect emulation experience–I just want it be as damn close as possible with minimal effort. For the most part the BittBoy achieved just that.

Older games from systems like NES and Master System worked great. Even though the BittBoy technically supports Playstation 1 games, however, I found it to be a poor experience due to the limitation of the processor and lack of necessary buttons. Don’t get me wrong–some PS1 games will run just fine, but I didn’t find it was worthwhile to dig too deeply in the library. For the most part I stuck with handheld games from the various GameBoy generations, which is what I wanted to play in the first place. Each emulator has options for things like adjusting screen ratios. Most even have support for save states, which is a plus for portability. 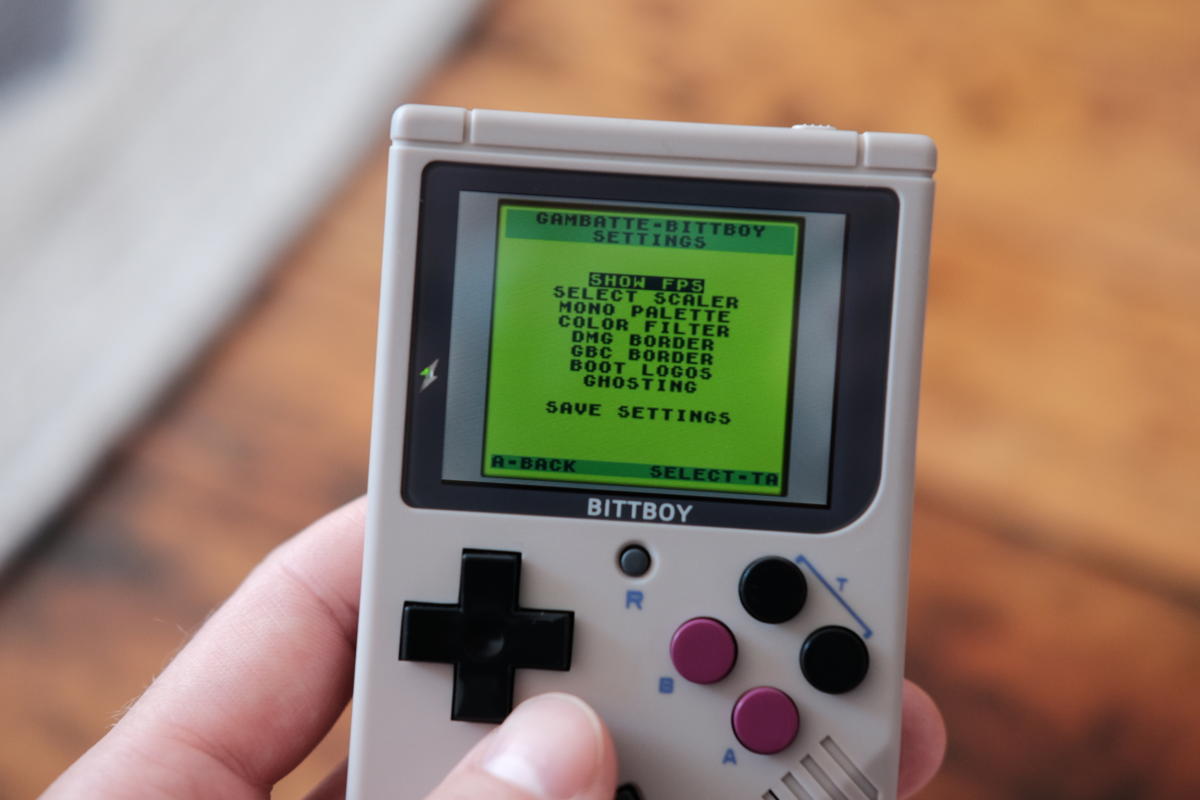 An example of the emulation options inside the GameBoy emulator

All in all I wouldn’t call the BittBoy’s user experience intuitive, as it does require a little bit of trial and error to get around, but it’s relatively easy and quick. It also features options for those who want to dive deeper into customizing their emulators, and is generally simple to use.

Of all the portable emulation devices I’ve tried, the New BittBoy v3 gets my highest recommendation. Its small size, great screen, and easy experience is only made better by its cheap price. Playing games that were made for handheld systems like the GameBoy on my TV with my Raspberry Pi-based emulator never felt quite right, so I’m glad to have the option to play these games in my hand once again. 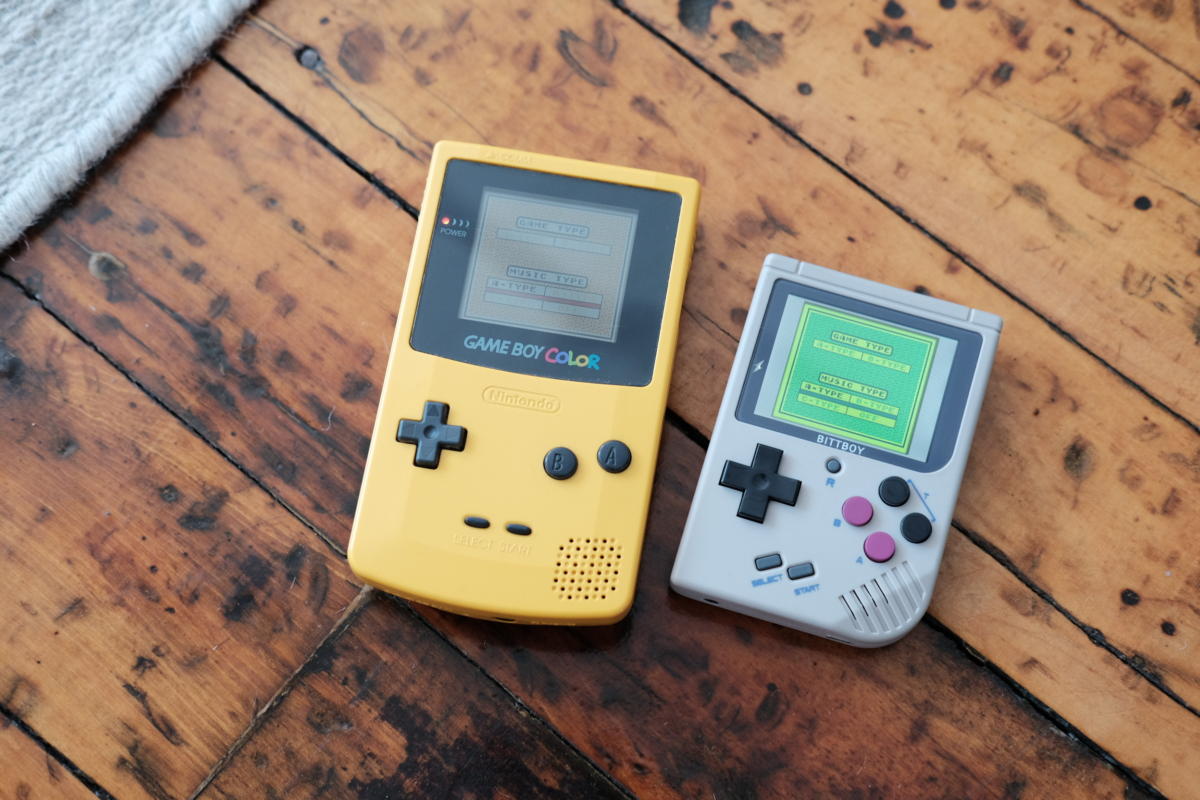 The BittBoy is a great modern handheld gaming device.

Mod Corner: If We Have To See This Creepy Among Us Sims 4 Mod, So Do You