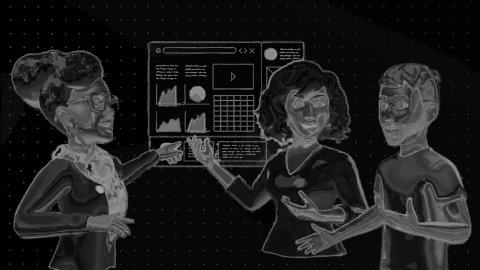 Announced at last year’s Connect, Meta Avatars replaces the legacy Oculus Avatar SDK first launched with the Oculus Touch controllers in late 2016. Back then avatars had a basic monochromic style with the eyes always hidden by a virtual headset or sunglasses. A major update released alongside Oculus Go in 2018 added skin tones, and another just before Oculus Quest in 2019 added lipsync, microexpressions, and simulated eye movement.

The new avatar system is a total replacement for the old system, not an update. It trades the semi-realistic aesthetic for a more playful cartoonish style. In April Facebook added the editor for the new avatars to the Quest and Rift system menus and launched a private beta for the SDK. The beta included PokerStars, Topgolf with Pro Putt, and Epic Roller Coasters.

The editor lets you create a full body avatar, but in apps you’ll only see from the torso up. A VR system with only head and hand tracking can make a reasonable guess as to your elbow position, but it’s not really possible to do the same for legs.

Meta is already using these new avatars across its Horizon suite of social VR apps. That will include Horizon Home, the coming update to Quest’s Home software adding social features. Meta hopes as many third party apps as possible leverage the SDK so users have a consistent virtual identity across a wide range of apps. The developers of Eleven Table Tennis and Cook-Out have expressed their intention to support it.

The SDK supports Quest and Windows-based VR platforms. However, users on non-Meta platforms can’t customize their own avatar. Instead they can pick between 32 default avatars – though the developer will need to build their own interface for this.