Video games rarely ever play with the passage of time in a permanent or meaningful way. Even The Legend of Zelda: Ocarina of Time – which notably features a seven year time skip halfway through the game – eventually gives Link a way of returning to his childhood. Nier Replicant actually commits to its five year time skip, so much so that not even New Game Plus lets you revisit Part 1.

The passage of time brings permanent change and Nier wants its audience to feel that. Major characters undergo radical redesigns, enemies in the field fundamentally change their behavior, and melancholy washes over what’s already an overwhelmingly oppressive world. Nier Replicant doesn’t hold back when it comes to actual change.

Nothing lasts forever, a fact Part 2 of Nier Replicant makes painfully clear. After entering Emil’s Manor at the end of Part 1, you’ve triggered the point of no return and are on the path towards the time skip. Nier Replicant has some real missables on account of its time skip, so make the most out of Part 1 while you can. The second half of Nier Replicant is a beast in and of itself. 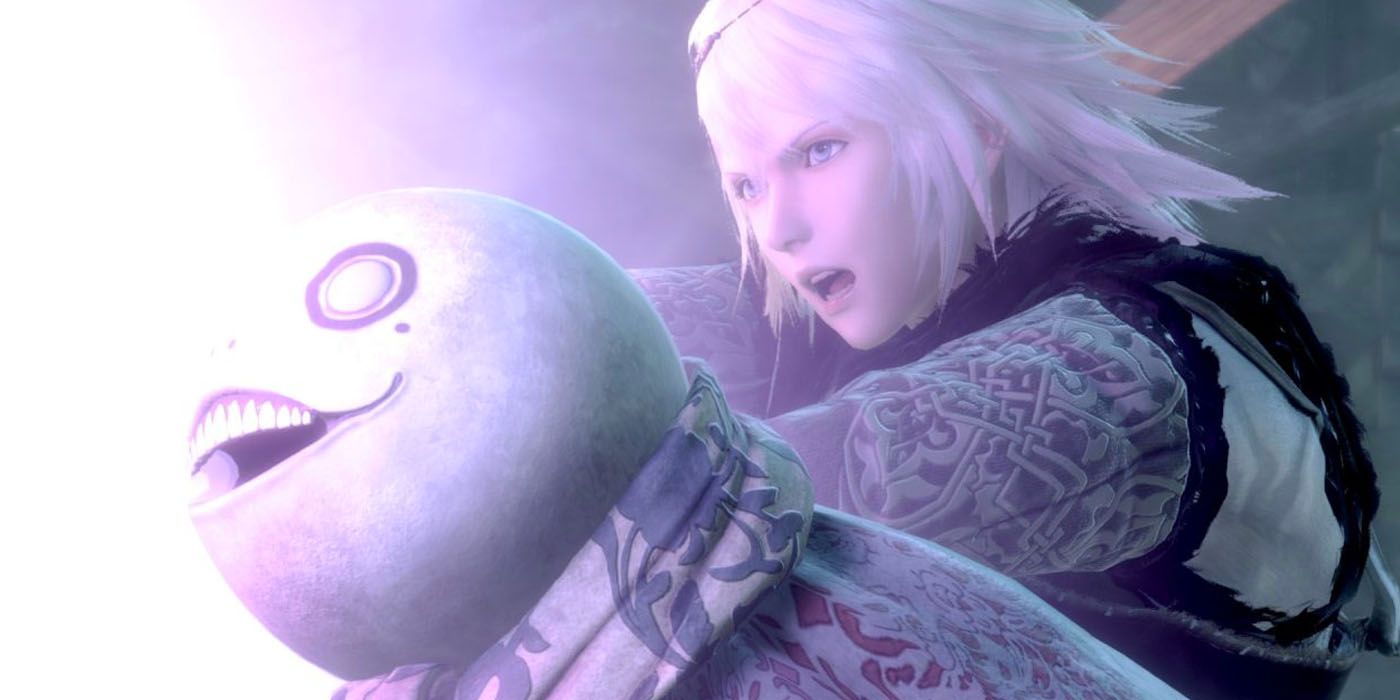 The most notable change following the time skip comes in Nier’s actual appearance. While Gestalt only featured a minor change on account of Father Nier being a fully grown man, Brother Nier goes through puberty during the five year jump. He’s now taller than Kainé, wears a prominently black outfit, and lets down his hair.

The shift from young Nier to adult Nier is honestly more impactful than young Link to adult Link in Ocarina of Time. Rounding out Nier’s time-skip redesign is a slight shift in personality as well. While young Nier dislikes Shades, adult Nier hates them with a blind rage that ultimately serves as commentary on the nature of JRPG protagonists slaughtering anyone they deem “enemy.”

Nier’s voice actor also changes, going from Zach Aguilar to Ray Chase. Both actors come together to deliver a fantastically voiced character. Aguilar captures the passion of a young man with just the right fervor without losing Nier’s idealism, while Chase brings a bitter (but still kindhearted) edge to the protagonist that makes him all the more compelling. 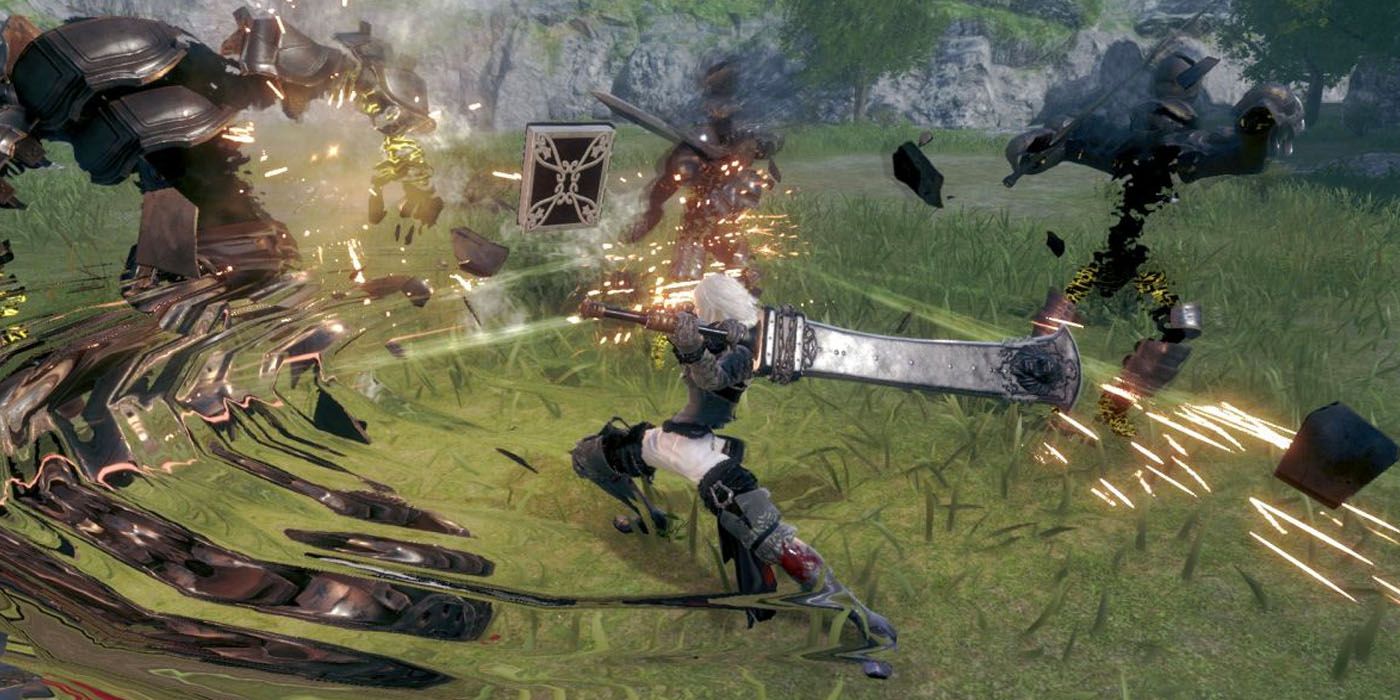 During Part 1, Nier can only use one weapon type: One-Handed Swords. The jack of all trades of Nier Replicant’s weaponry, One-Handed Swords chain quick combos and do reliable damage, but the fact so many are found during the first half means they pale in comparison to Nier’s Two-Handed Swords and Spears.

Having grown up during the time-skip, Nier is now strong enough to wield heavier weapons with their own play styles. Two-Handed Swords are slow, but they hit hard and can break a Shade’s guard easier than any other weapon. Spears are incredibly fast and can deal quick, lethal combos. What they lack in range, they make up for with reach. 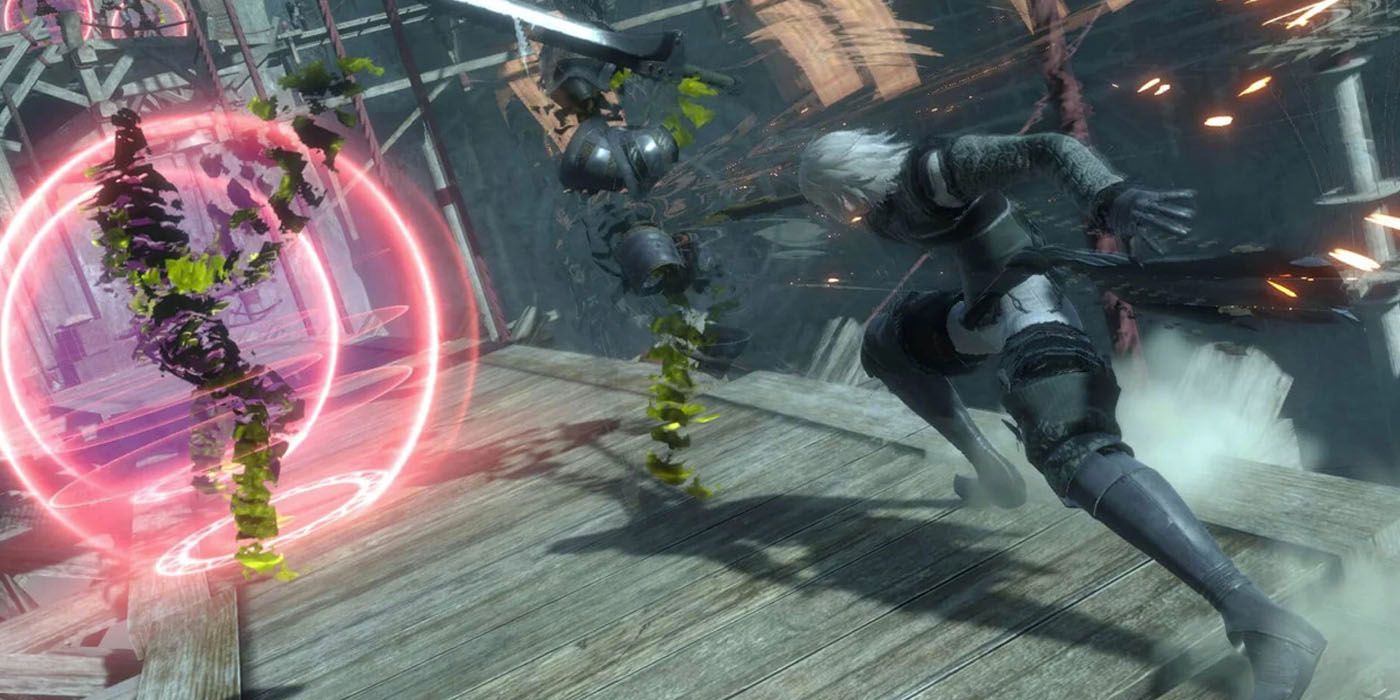 Aside from the rare enemy who can actually block attacks, Shades in Part 1 are relatively easy to kill. This changes in Part 2 when Shades start appearing wearing full suits of armor. While smaller Shades only wear shields that can be chipped away easily, other Shades are decked out in heavy gear that will tank light combos.

The fastest way to break down a Shade’s armor is to use charge attacks. Holding the Heavy Attack button allows Nier to do a strong strike with any of his three weapons, eating away at armor. Alternatively, equip Words that offer Guard or Armor Break. 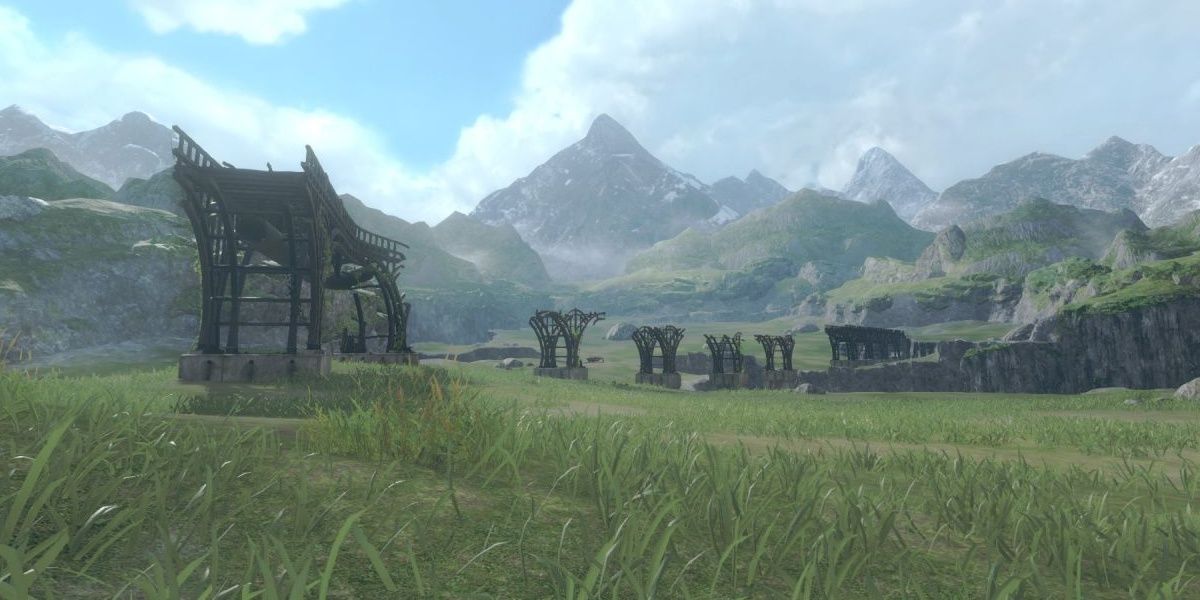 Nier Replicant is set in a dying world and the game makes a point to hint at a food crisis across multiple side quests. Attentive players might notice that a little bit of overhunting happens during the five year time skip. Animals appear in far less numbers during Part 2, with some species outright removed from the game.

Sheep, Bats, and Spiders no longer appear in the overworld after Part 1. The only animals left are Wolves and Scorpions in the Desert, and Goats and Boars which are now found on the Eastern Road. The lack of animals in Part 2 puts into perspective just how far gone Nier Replicant’s future is. 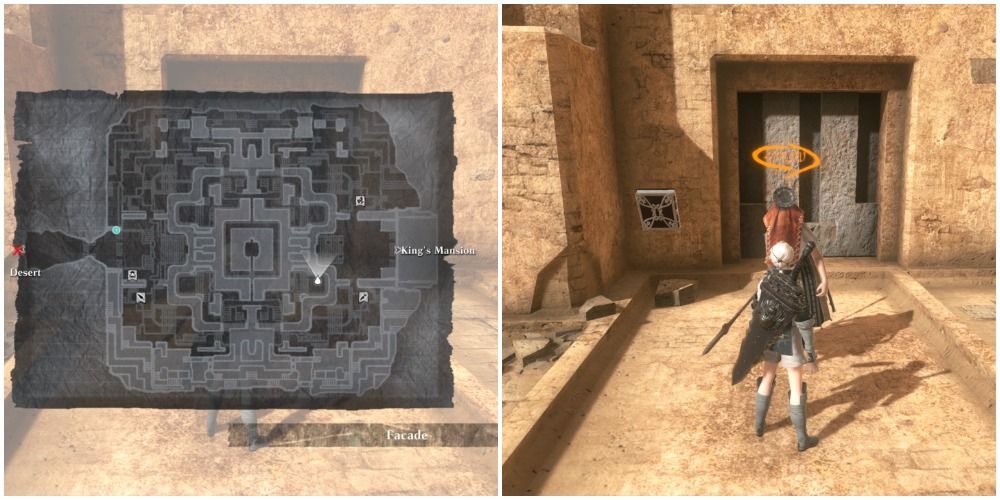 One major change after Part 1 is the complete loss of any side quest (other than The Fisherman’s Gambit) which you didn’t complete before the time skip. While none of the quests in Part 1 reward any missable weapons, this isn’t a huge deal, but this doesn’t mean you’ll be permanently locked out of 100% completion on that file.

Similarly, there are some Words that can only be unlocked during Part 1, locking players out of 100% Word completion until The Magical Stone appears as a side quest at the end of the game. For anyone who doesn’t want to miss anything major, make sure you have 50% side quest completion before going to Emi’s Manor.

Next: Nier Replicant: Where To Find Goat Hide 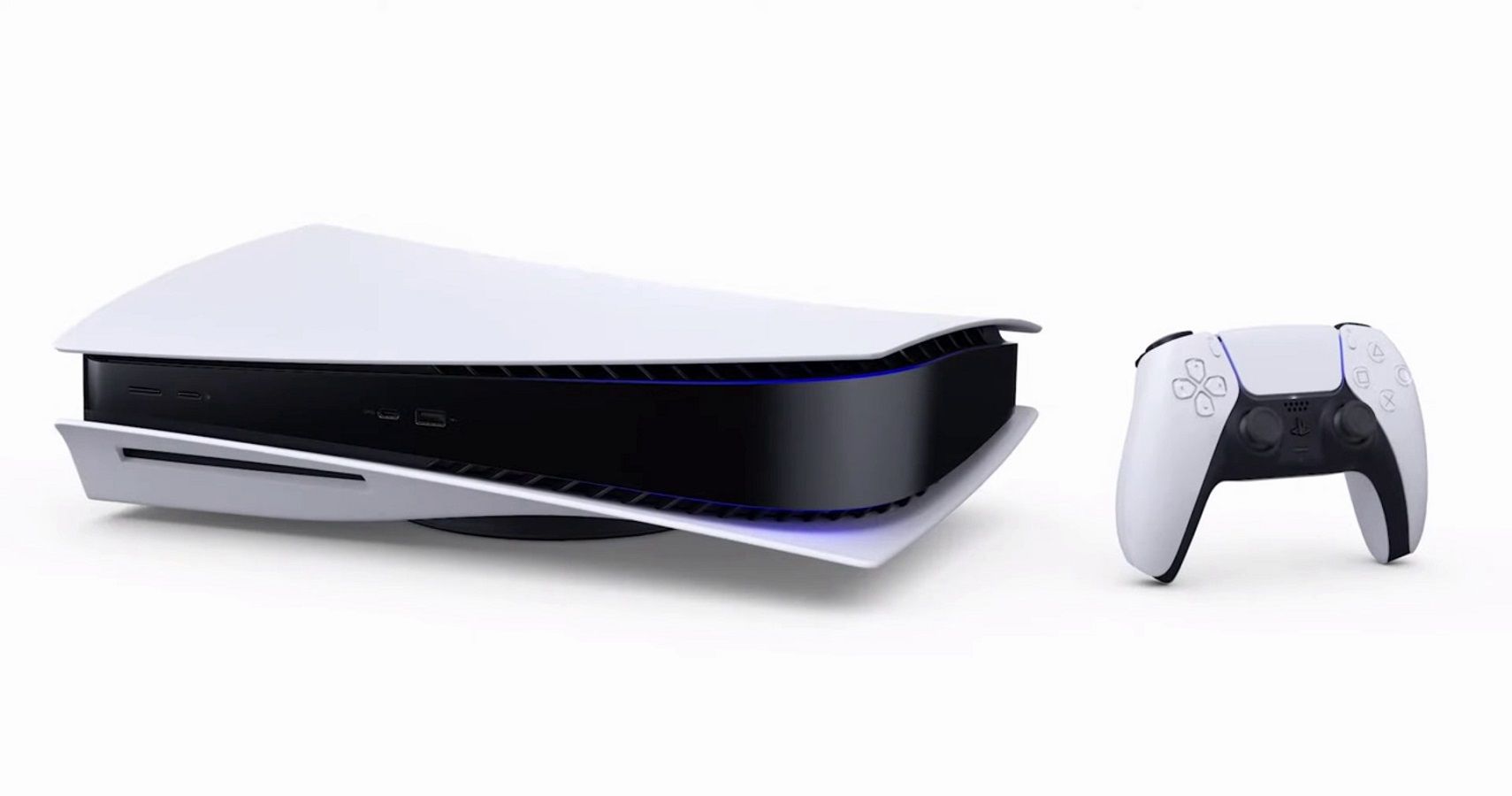