Detour might be the shortest main quest in Outriders. You enter a hub area that you can completely skip, then encounter three groups of bandits before the quest ends. It doesn’t get much faster than this.

With that said, this mission does contain some rather tough enemies and chaotic gunfights. You’ll need to kill two Vanguard Captains in this brief mission, which is quite the task on higher World Tiers. If you don’t want to lower your World Tier, consider crafting some better items before proceeding. Disregarding that, it’s time to carve a path through multiple groups of deadly bandits. 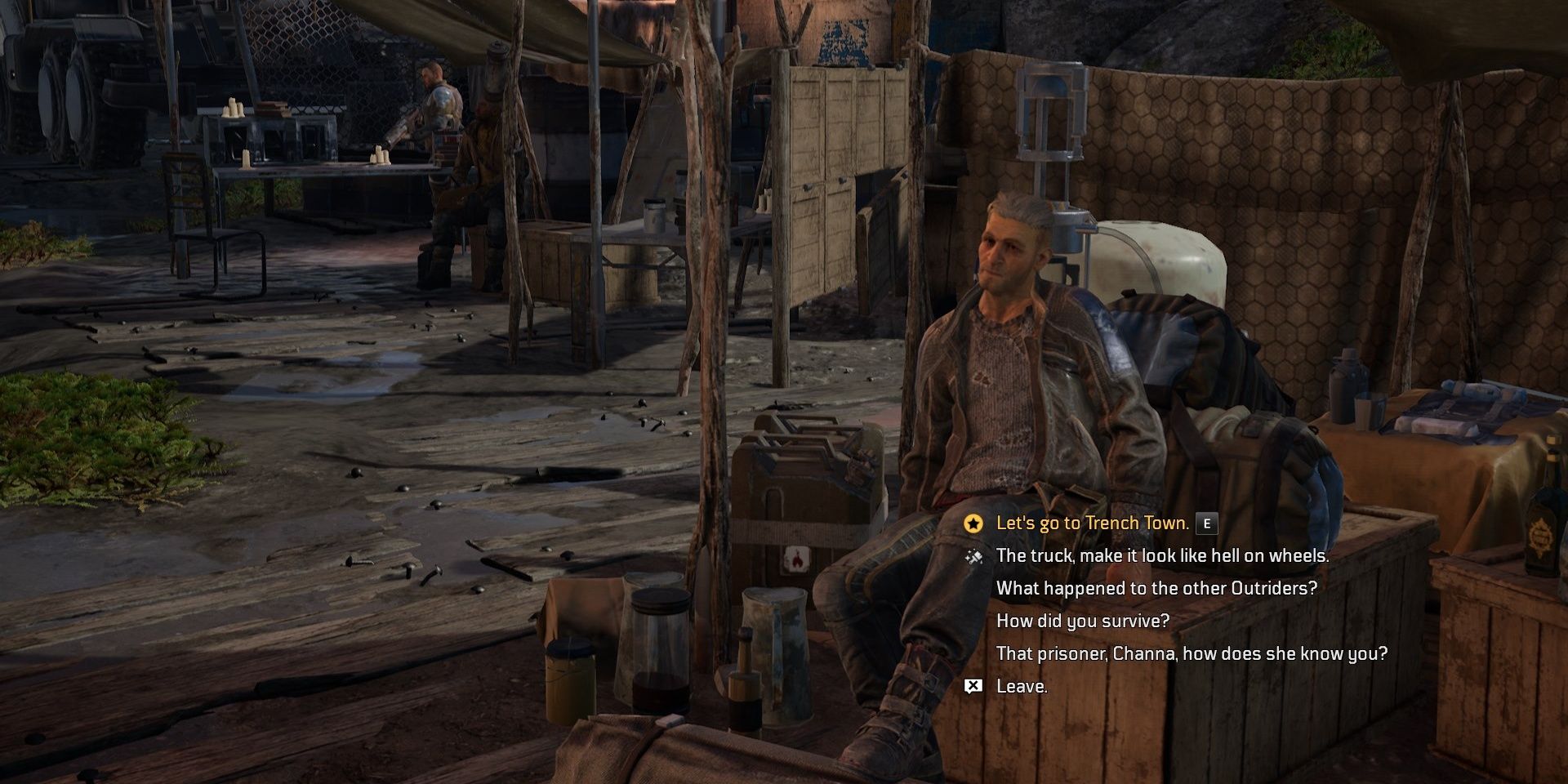 If you only care about progressing through the main story, there’s no reason to stay at Deadrock Pass. Equip your highest level gear, craft any mods you need, then speak to Jakub when you’re ready to leave. Select the “Let’s go to Trench Town” option to progress.

Escort Marshal Bailey And Her Captive To Trench Town 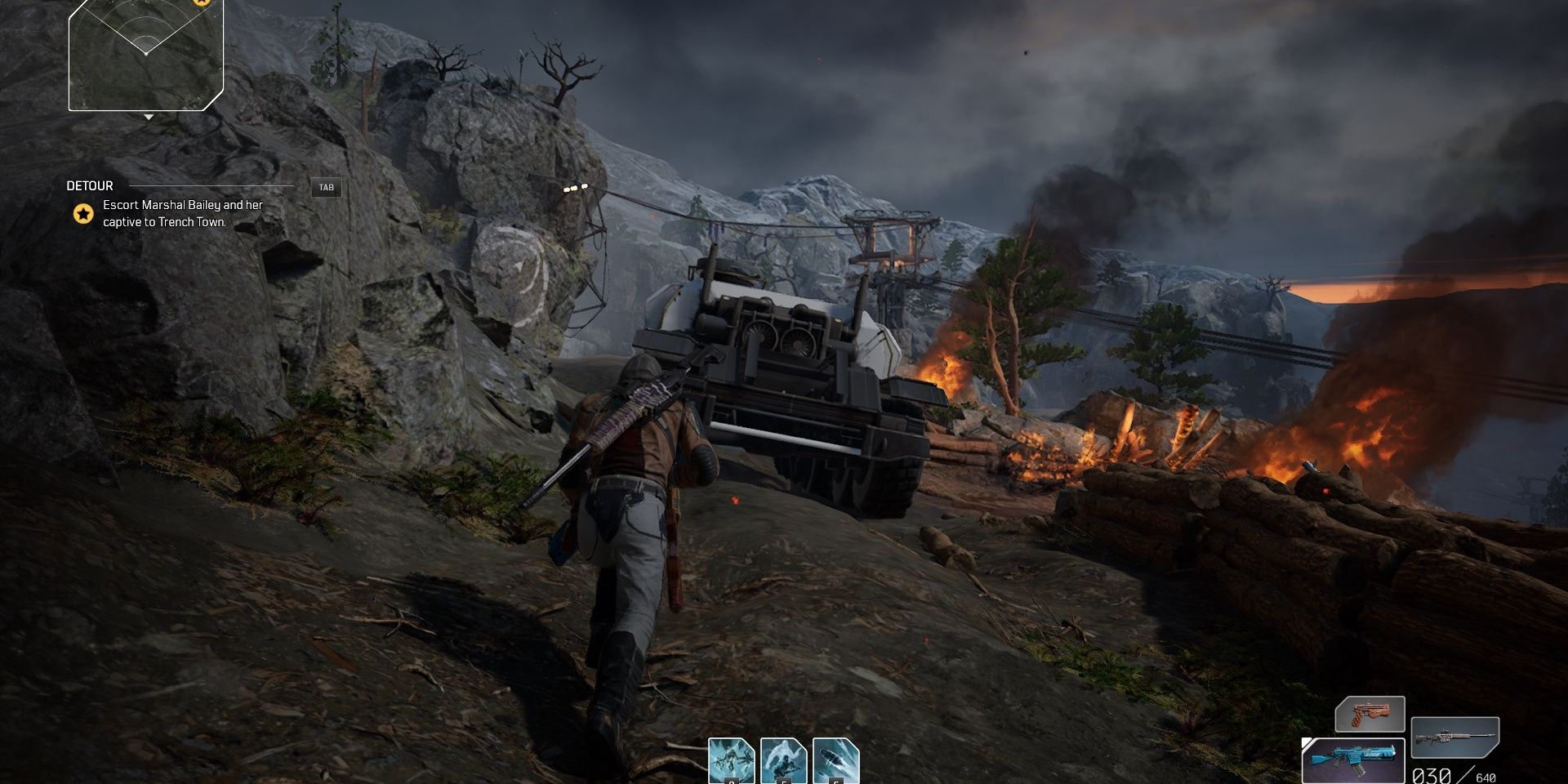 Since bandits have been sighted up the road, you’ll need to clear out the path before Jakub can escort Bailey. Run past the truck and continue down the road to find the first group of bandits. 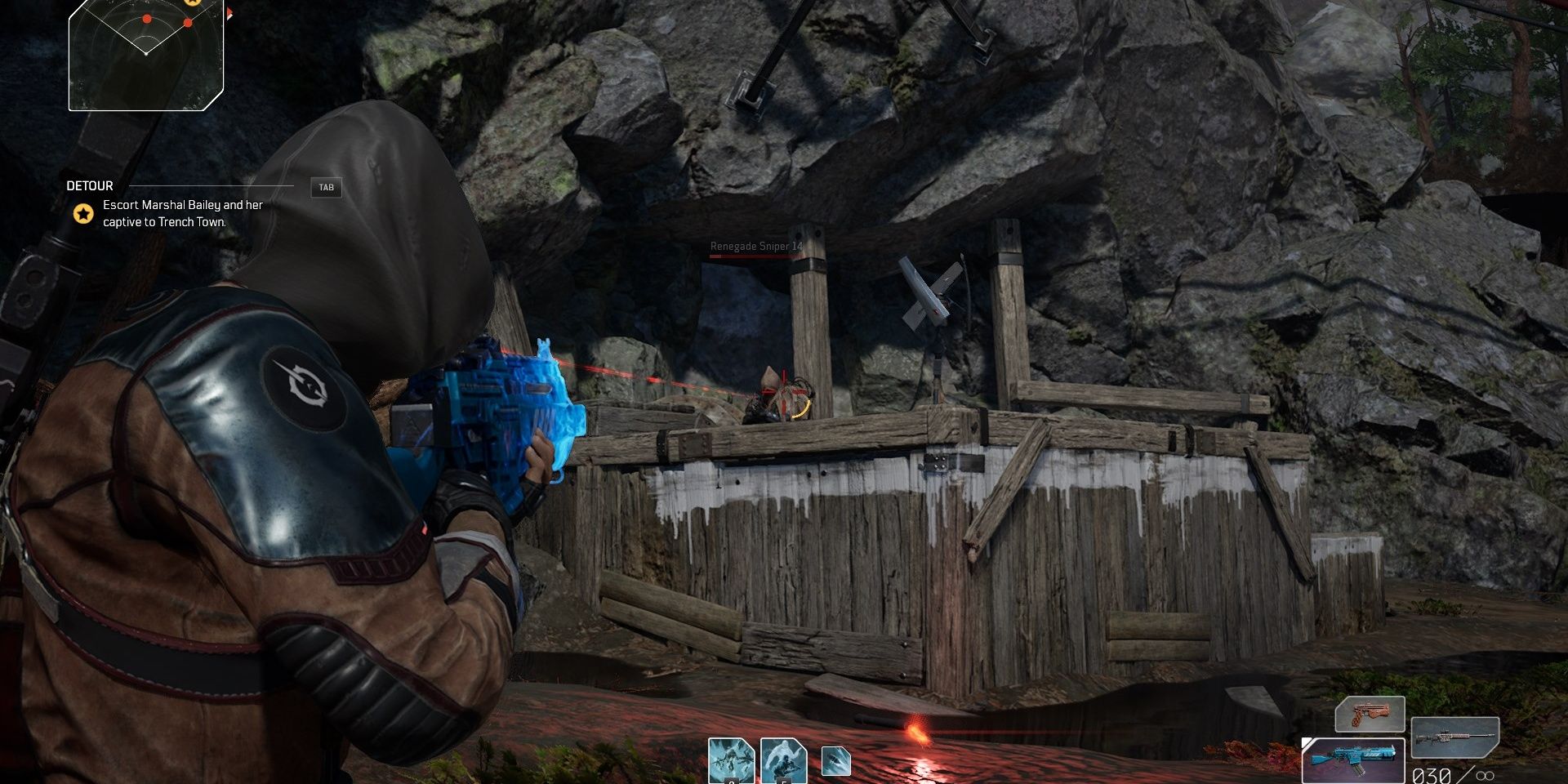 Most of these enemies are fodder and won’t take much punishment. There is a sniper on the wooden platform on the left part of the road, so take them out as soon as you can. 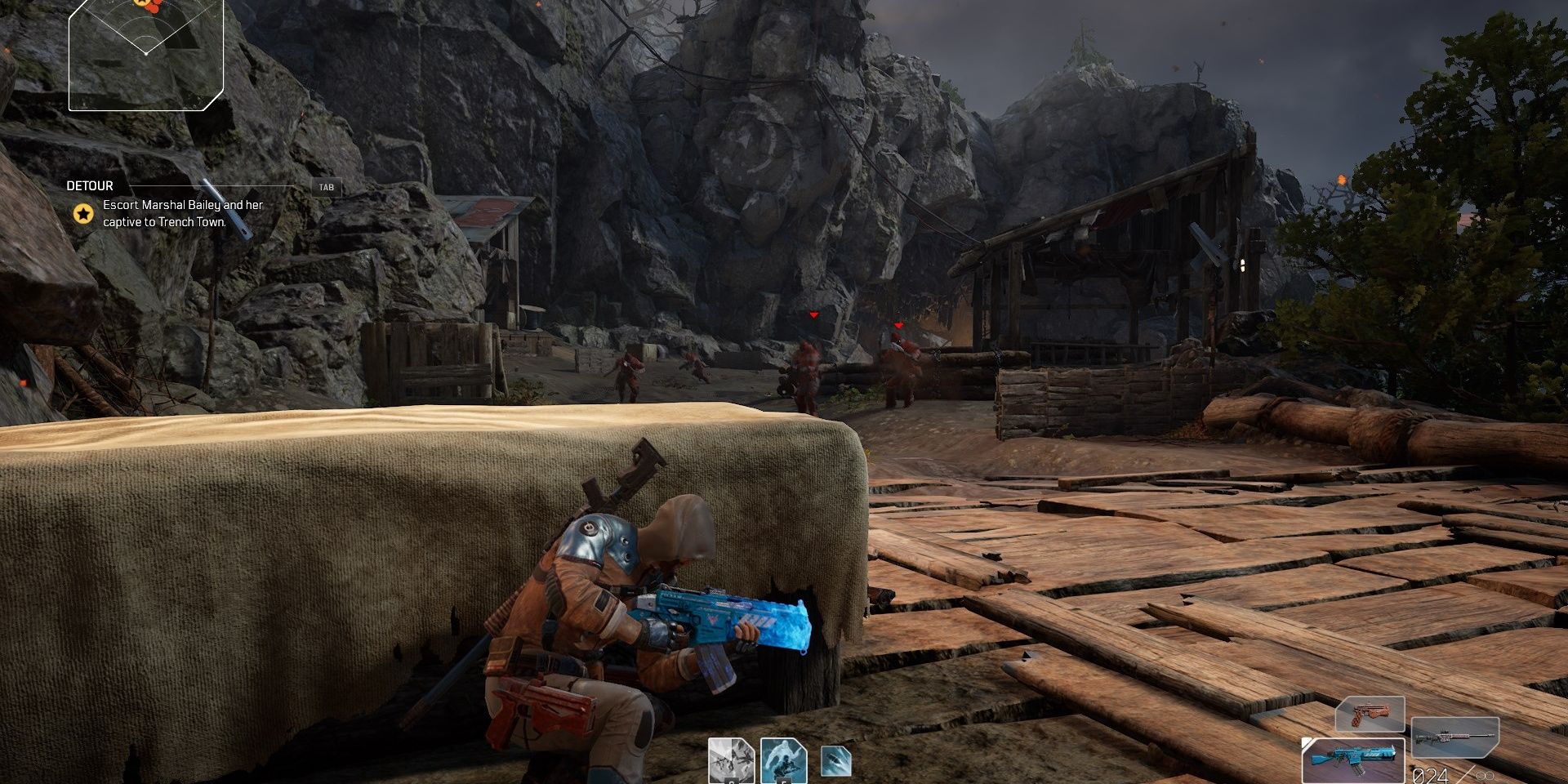 Past the wooden bridge is a group of melee units. They’ll slide and tumble towards your location. If they close the gap, use a melee attack or ability to quickly kill them. Past those enemies are more ranged units and a sniper. Head to the wooden shack at the back left part of the arena to find the sniper. Take them out, then clean up the rest of the enemies. 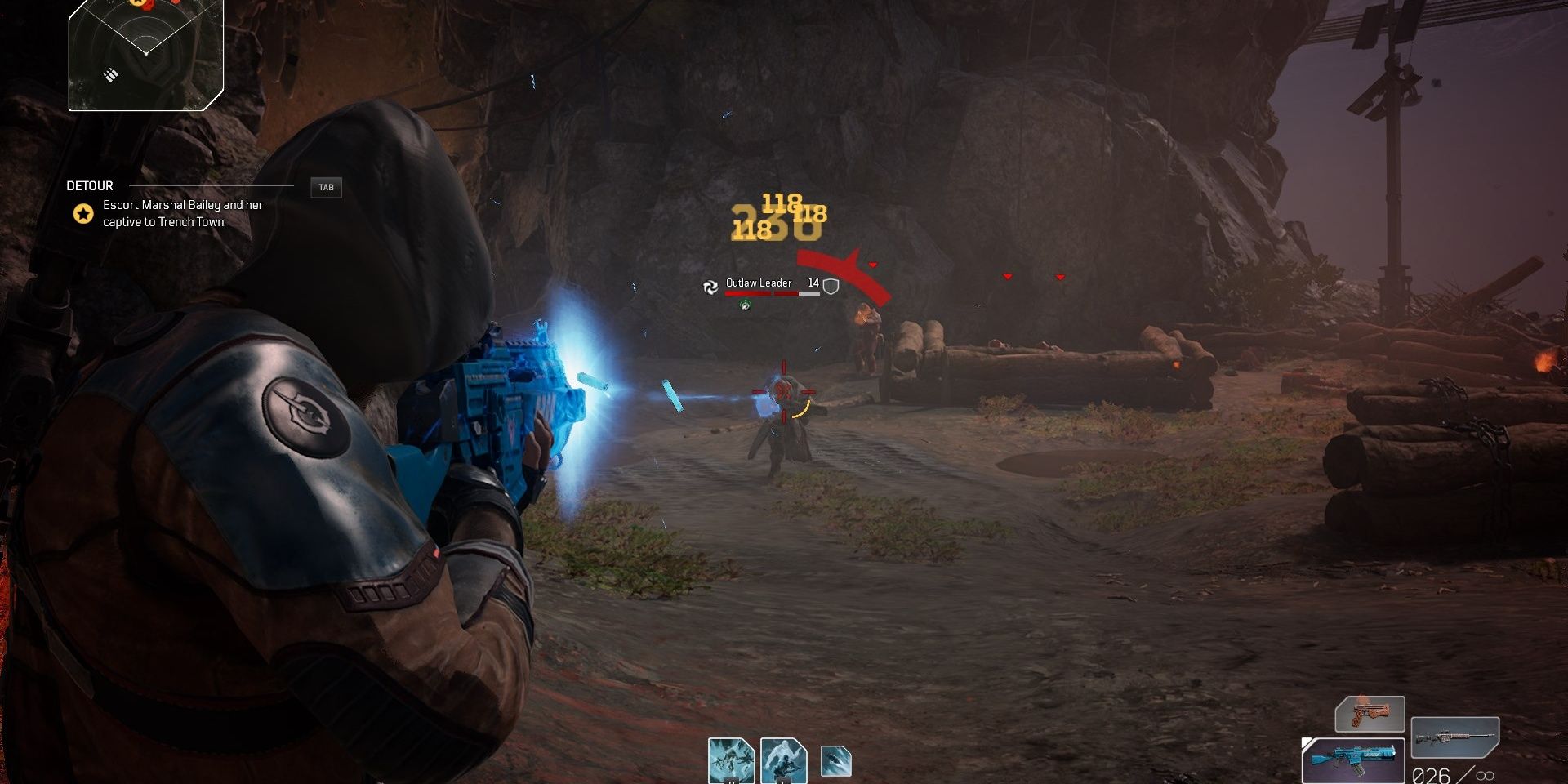 With those bandits dealt with, an additional wave of enemies will rappel from the cliffside in front of you. These enemies aren’t much of a threat, but the Captain that spawns alongside them is a different story.

Named “Outlaw Leader,” this enemy is just a reskinned Vanguard Captain that can freeze you. Kill the fodder enemies first, then focus on the Captain. If it ends up freezing you, use your melee ability to break free.

Further Up The Road 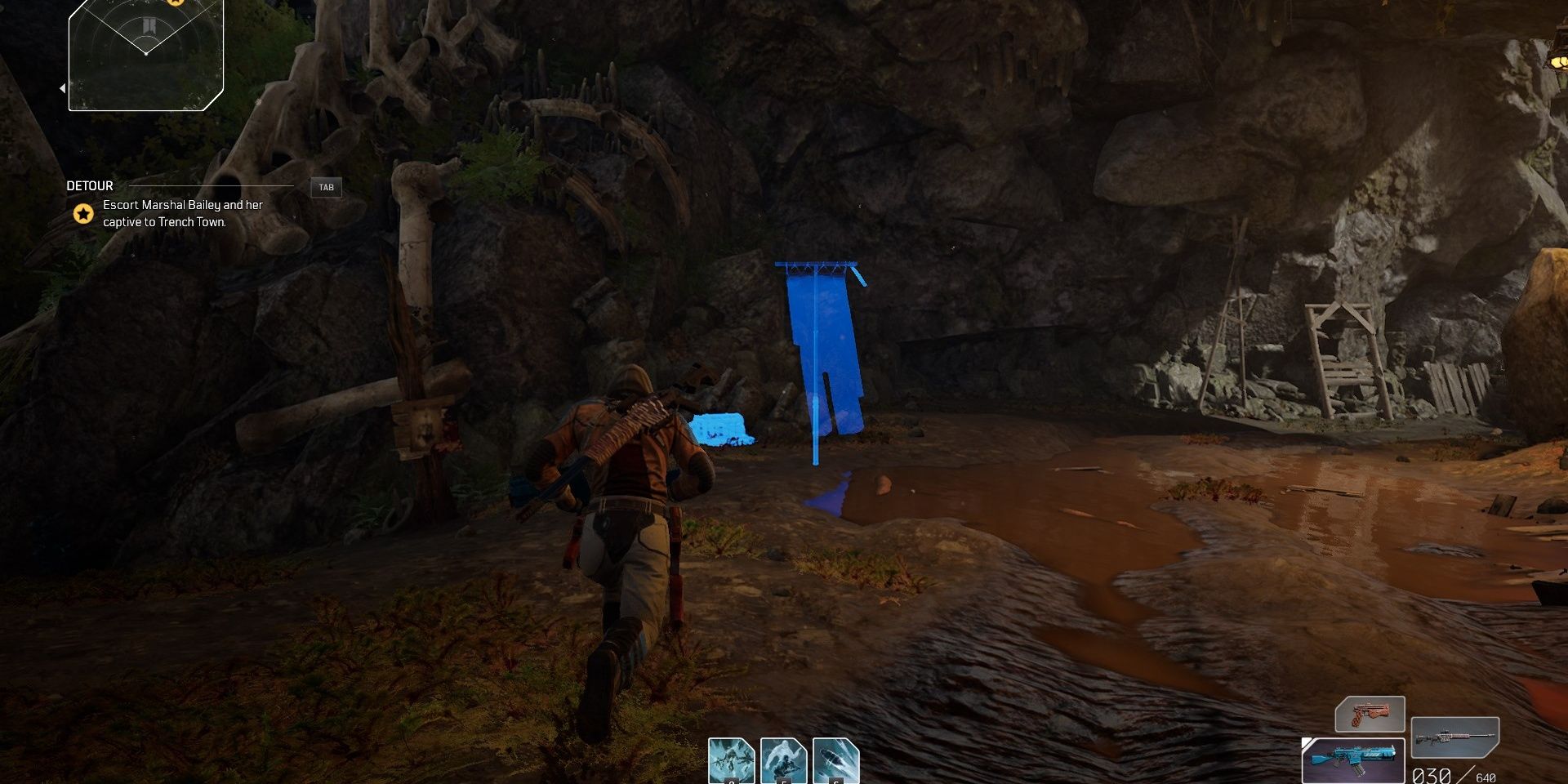 Plant a flag at the hologram location, then use this opportunity to restock on ammo. Press onward to fight the next group of enemies. 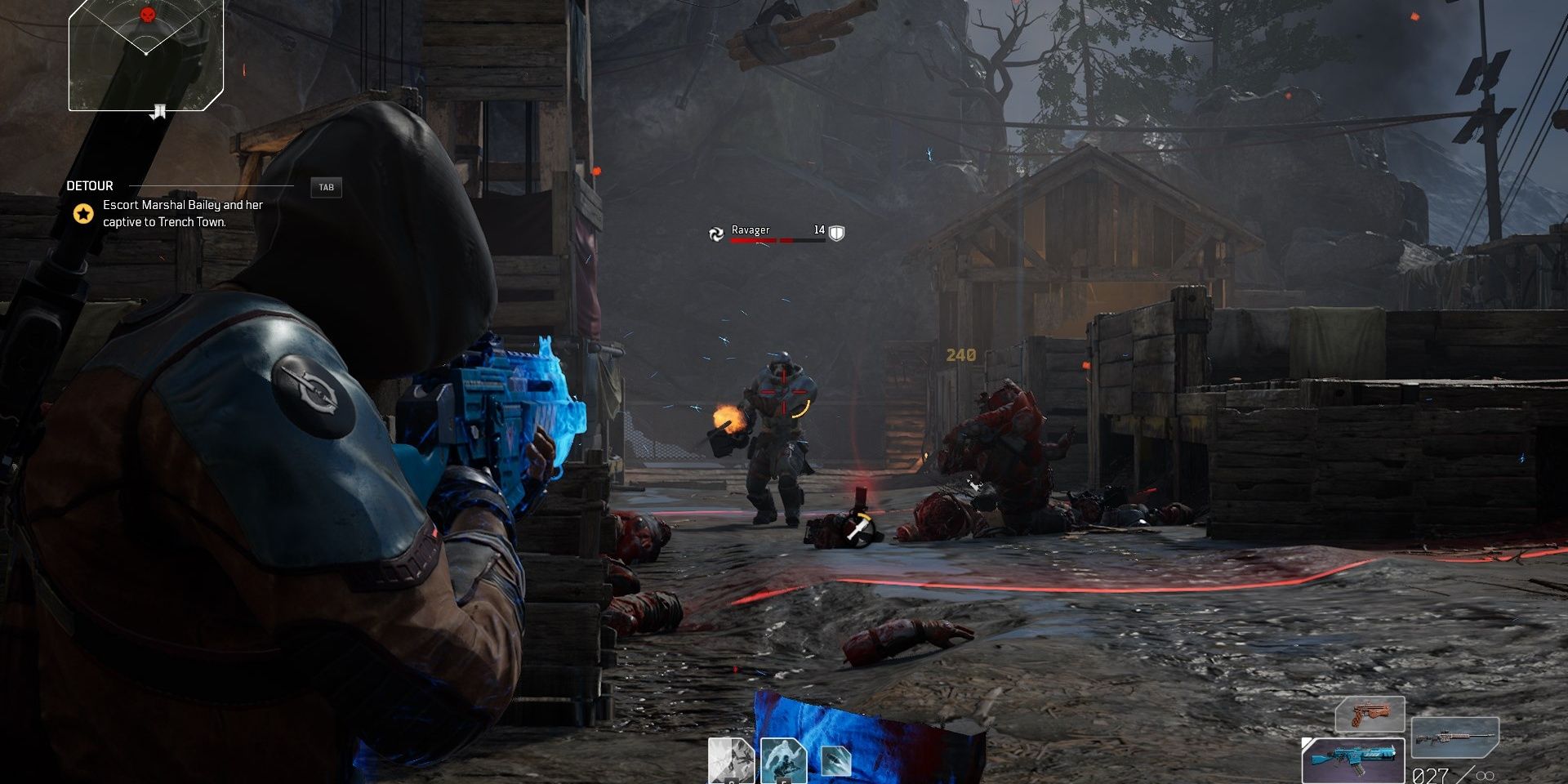 They’ll be two Ironclads (named Ravagers) that will spawn right after you arrive. A swift melee attack will break all of their armor, allowing you to take them out with ease. The rest of the enemies should be a breeze to kill. 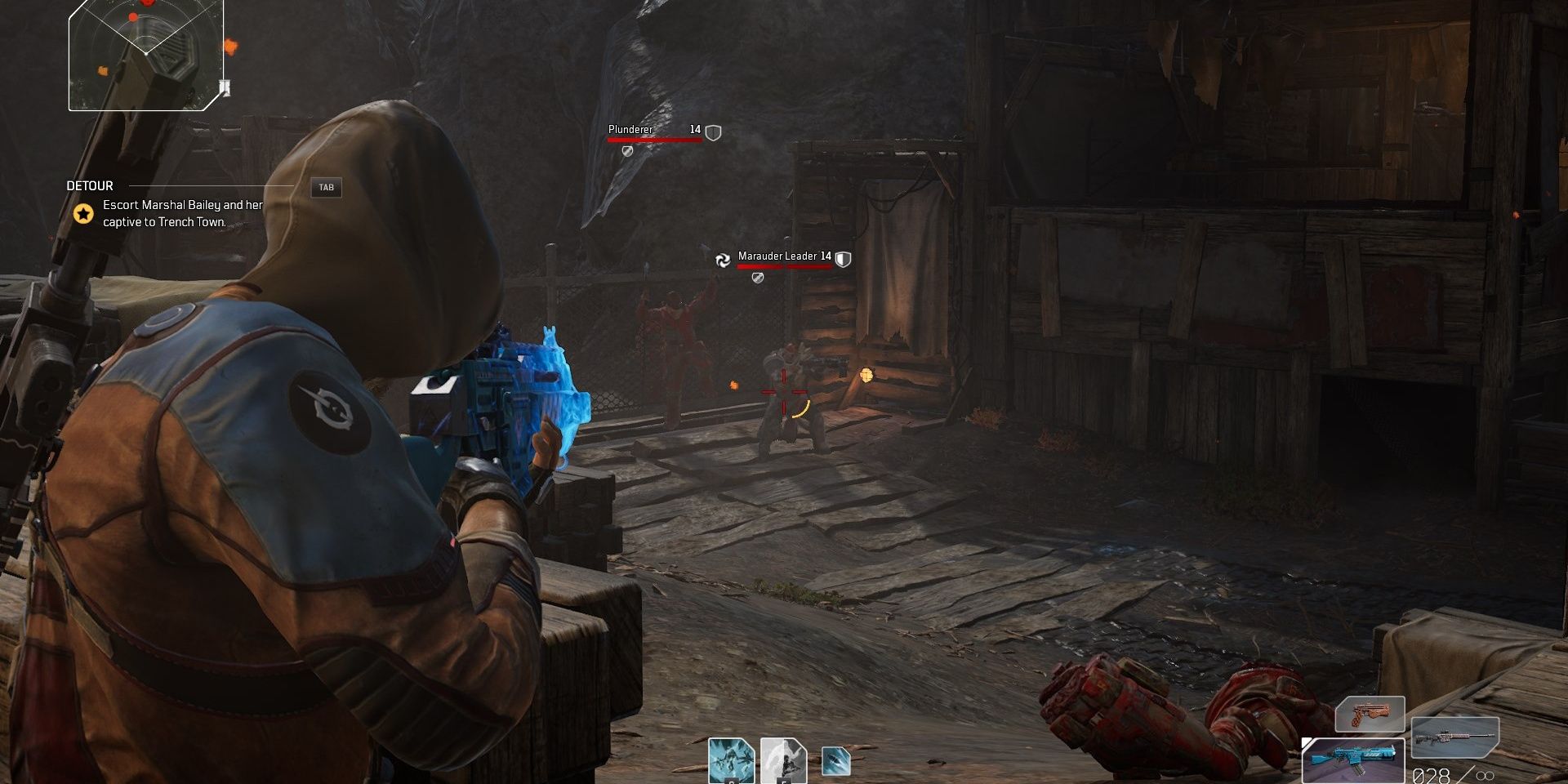 A Marauder Leader will jump over the fence at the end of the arena, accompanied by a few melee units. This Marauder can freeze you, just as the last Captain Elite could. It behaves the same as the last enemy you fought. Stay aggressive, use your melee if you’re frozen, and kill the melee units whenever you need to recover your HP. 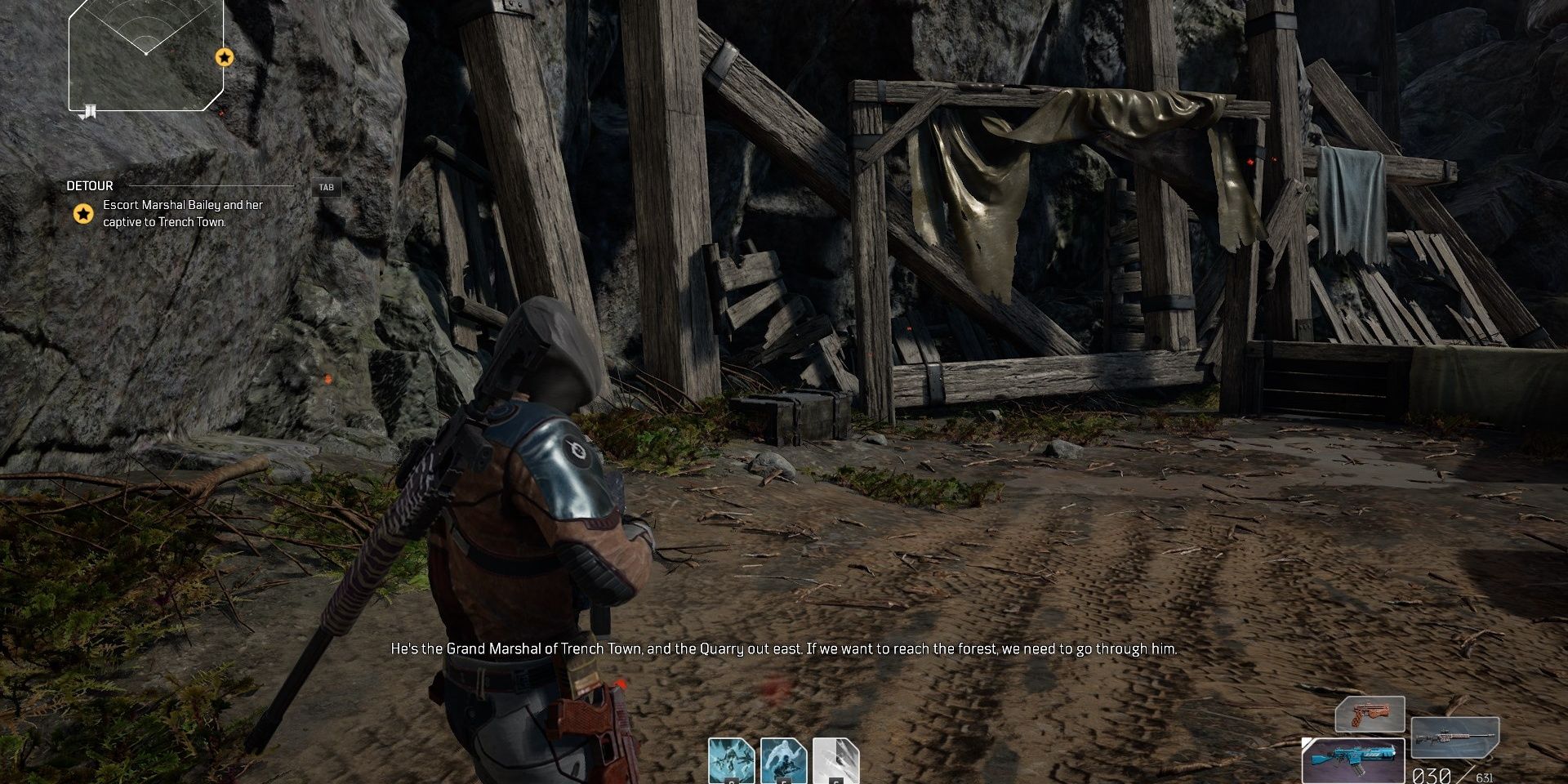 On the far left of the arena is a chest resting beside a rock wall. 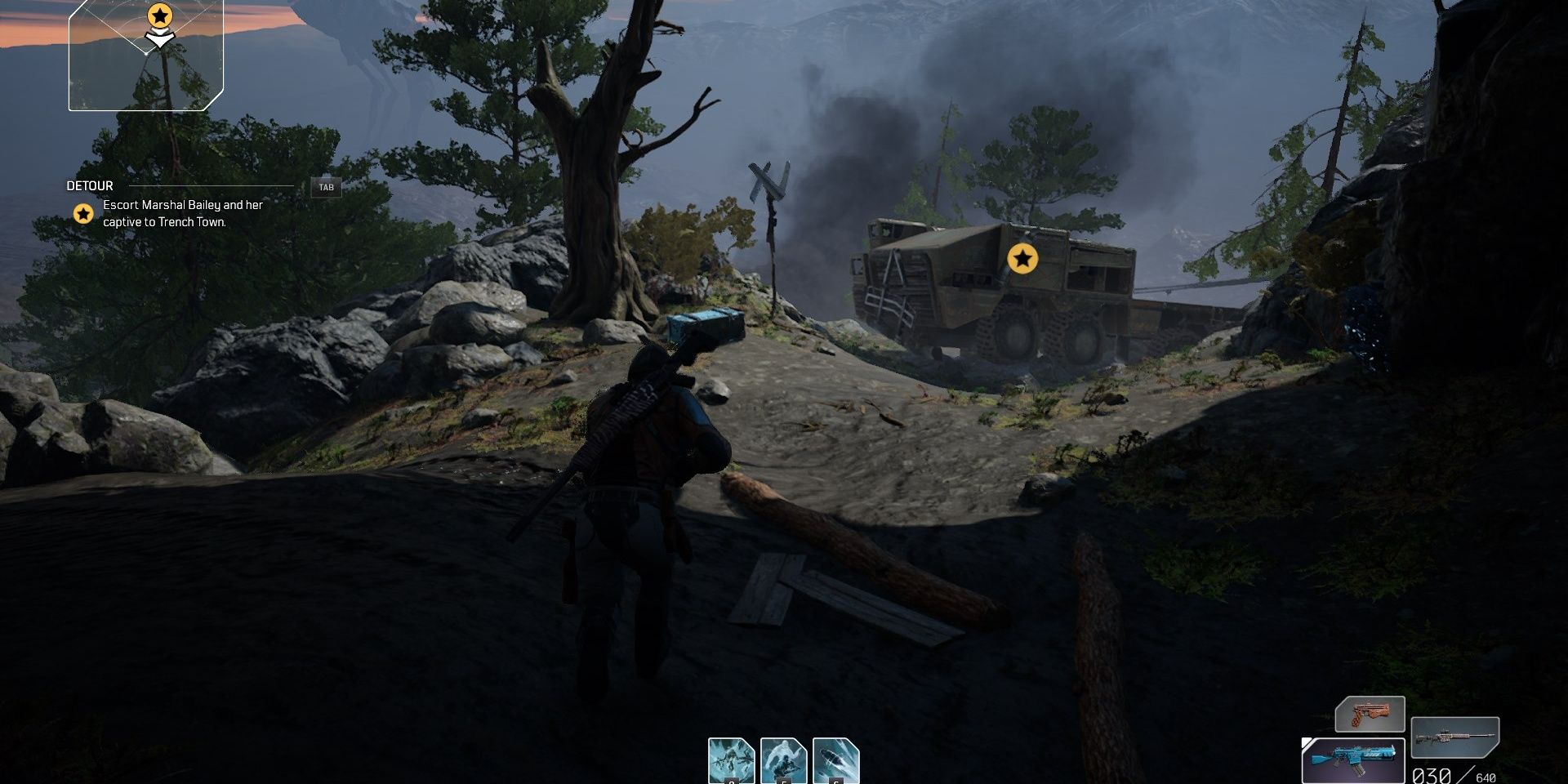 Open the gate the enemies came from, then rush down the end of the road to finish the quest. Be sure to loot the area and open the chest beside the truck before leaving.