Out of every Expedition in Outriders, Eye of the Storm is arguably the hardest of the bunch. This mission is the ultimate test of a build’s endgame viability, demanding either high damage output or crowd control effects just to complete it.

For farming, this is the worst mission in the game. Achieving Gold is impossible solo, and reaching a Silver rank is a big ask for most builds. With that said, there aren’t many Expeditions that push a build as much as Eye of the Storm, making this a good mission for testing a build’s damage output and overall survivability. Here is a complete guide on Outriders’ Eye of the Storm Expedition. 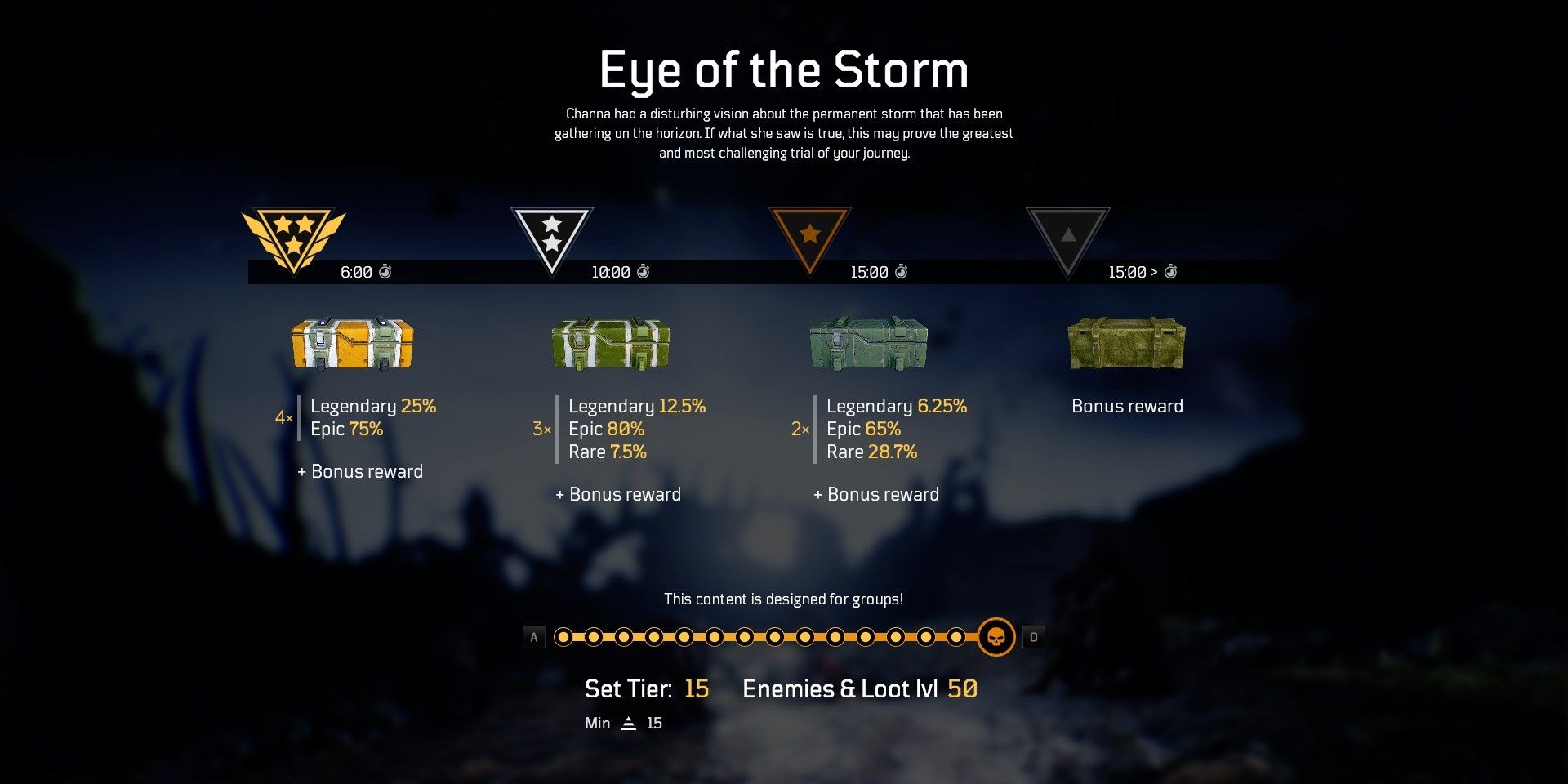 Note: Eye of the Storm requires 40,000 Drop Pod Resources to begin. You can only start this mission at Challenge Tier 15. This mission is impossible to Gold solo! You will have to get a group of people to get beyond a Silver rank.

Most of the enemies in this mission are Beasts, although the final encounter consists of a Feral boss and a new Feral enemy type: Reavers. The boss is absurdly tanky, absorbing hundreds of rounds from most Firepower builds. At least one member of your team should be a DPS build. A crowd control build is also highly recommended to make the first encounter quicker. 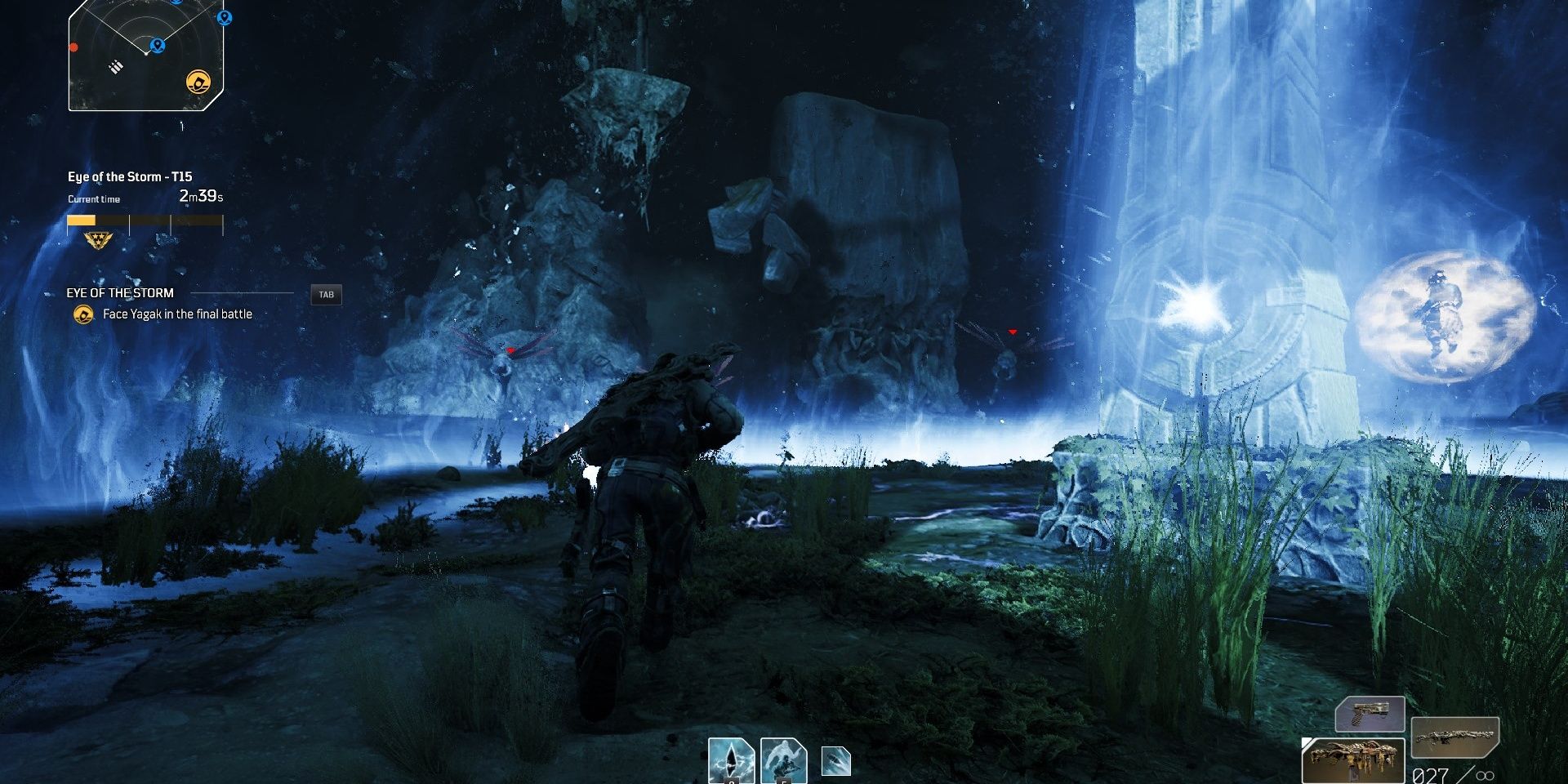 Eye of the Storm is a fairly short Expedition, but that doesn’t make it easy. It turns out that Yagak is still alive, recuperating his strength by using the storm. To weaken him, you’ll need to capture three Obelisks surrounding him. You can capture them in any order, and they don’t lose capture progress if you step away or get swarmed near one. Capturing an obelisk also kills every living enemy, giving you a short breather to reload or recharge your abilities.

Beasts will swarm you from every section of the arena, spawning waves of Alpha Perforos and Strix. The Perforos can stunlock you with ease, shutting down any build that lacks Armor. Strix are an arguably larger threat, inflicting Toxic from far away. Kill the Strix first before dealing with any other enemy type. Should your build revolve around shotguns or other close-range attacks, use the Obelisks as cover from any Strix projectiles.

If you’re playing this solo, crowd control is going to be your best option for staying alive. Whenever most of a given wave is defeated, a new wave will spawn to take its place. The breathing period between each wave of enemies is short, typically around five seconds. Freezing or Ashing enemies in place is a good way of giving yourself breathing room for capturing the obelisks. Unless you can one-shot CT15 enemies, crowd control is mandatory for obtaining Silver if you’re a solo player. 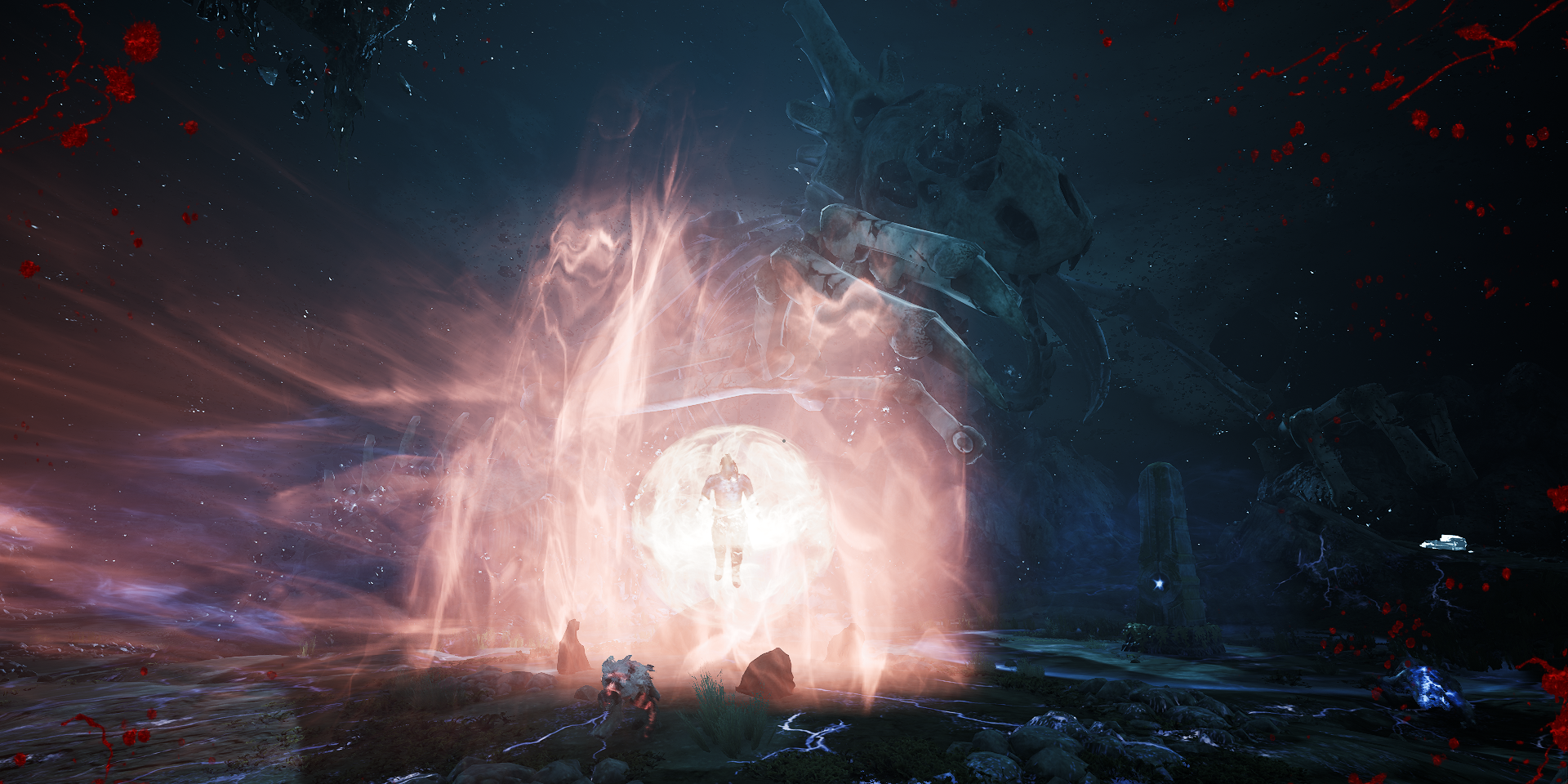 Nearly every wave will spawn Perforos, Alpha Perforos, Maulers, and Strix. The Strix and Alphas are the most dangerous enemies of the bunch, so focus on taking them out first. Waves spawn whenever you clear the previous one or whenever an obelisk is starting to be captured. Because of this, you can actually stop enemies from spawning by leaving one Strix alive. It’ll float away from you, giving you time to capture an obelisk. If you hop between obelisks or kill the Strix, it’ll spawn another wave.

The obelisk closest to you will spawn a Brood Mother when you stand near it for a few seconds. Shoot at its heart to break it, disabling its ability to buff allies. Keep it at a distance to prevent getting stunlocked.

Going clockwise, the next obelisk will spawn two Crawlers alongside the standard fodder wave. This is arguably the hardest obelisk, as these Crawlers can inflict Freeze from a distance. Focus on killing them right as they spawn.

A Behemoth will spawn when you first start to capture the third and final obelisk. As long as you don’t get hit by its charge or melee attack, it doesn’t pose much of a threat. Stay behind it to safely damage it. 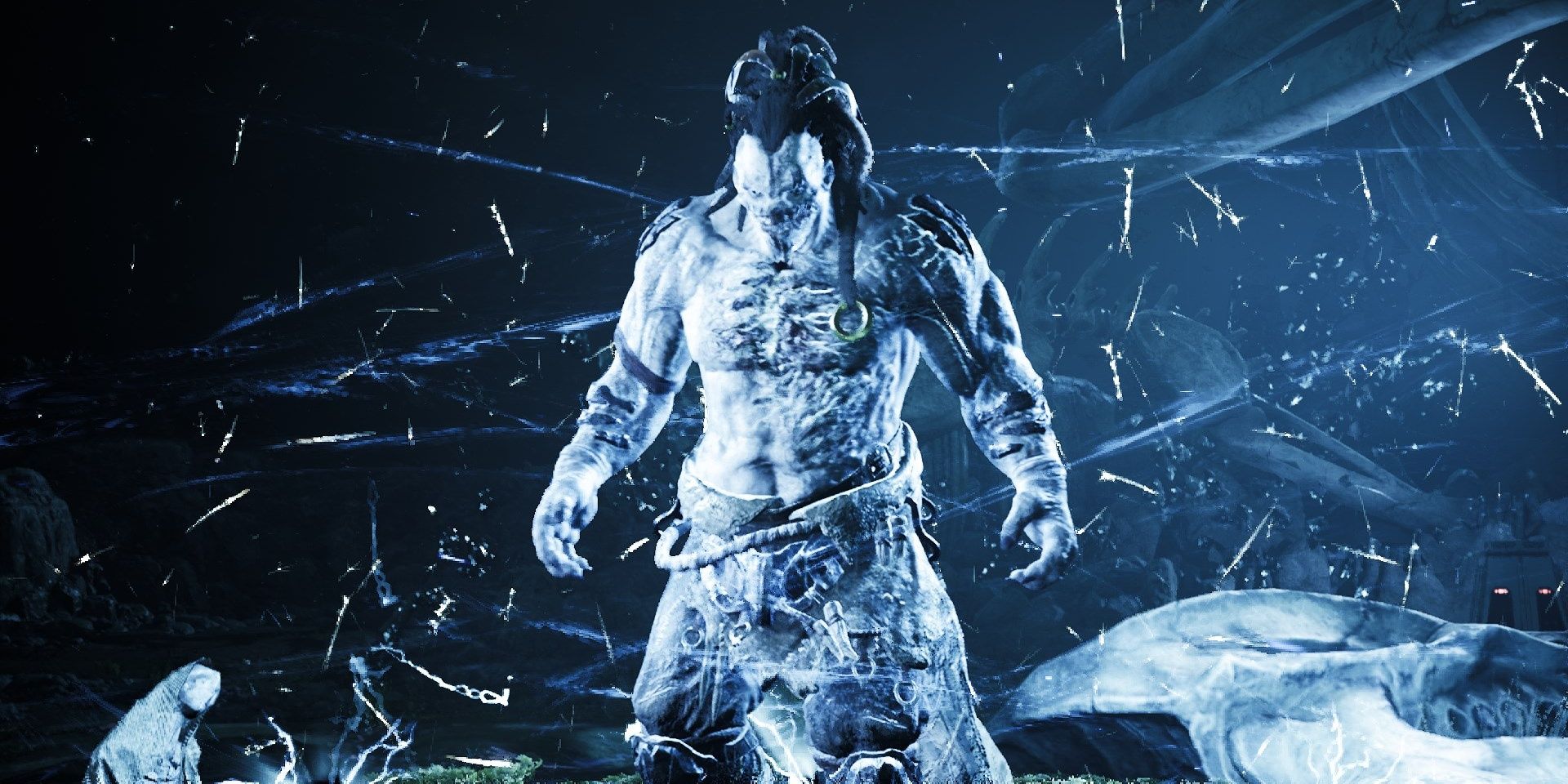 Yagak hasn’t learned any new tricks since the last time you fought him. He uses the second encounter moveset, summoning portals and casting abilities instead of using melee. The first part of this fight is fairly easy. Kite Yagak around the arena to prevent getting hit, then deal as much damage to him as possible. Whenever he summons a pair of Anomaly Rifts, take them out immediately. They’re more dangerous than Yagak himself.

For every third of Yagak’s health you remove, two Reavers will spawn at the center of the arena. Kill the Reavers immediately! Not enough emphasis can be placed on killing these Reavers. They use the same melee moveset that Yagak used when you first fought him, weaving leaps and wide slashes that can two-shot most builds. Reavers are absurdly dangerous and should be dealt with as soon as possible. Use crowd control effects to build some distance. Don’t become too reliant on them, however, as they count as Elites.

When Yagak reaches the last third of his health, waves of Ferals will begin to spawn alongside two Reavers. At this rate, unless you don’t deal much damage, killing Yagak right now is the best approach. When Yagak dies, every enemy will despawn. If you can’t kill Yagak, kill the Reavers first before damaging Yagak and the other Ferals. Defeat Yagak to finish the hardest Expedition in Outriders. 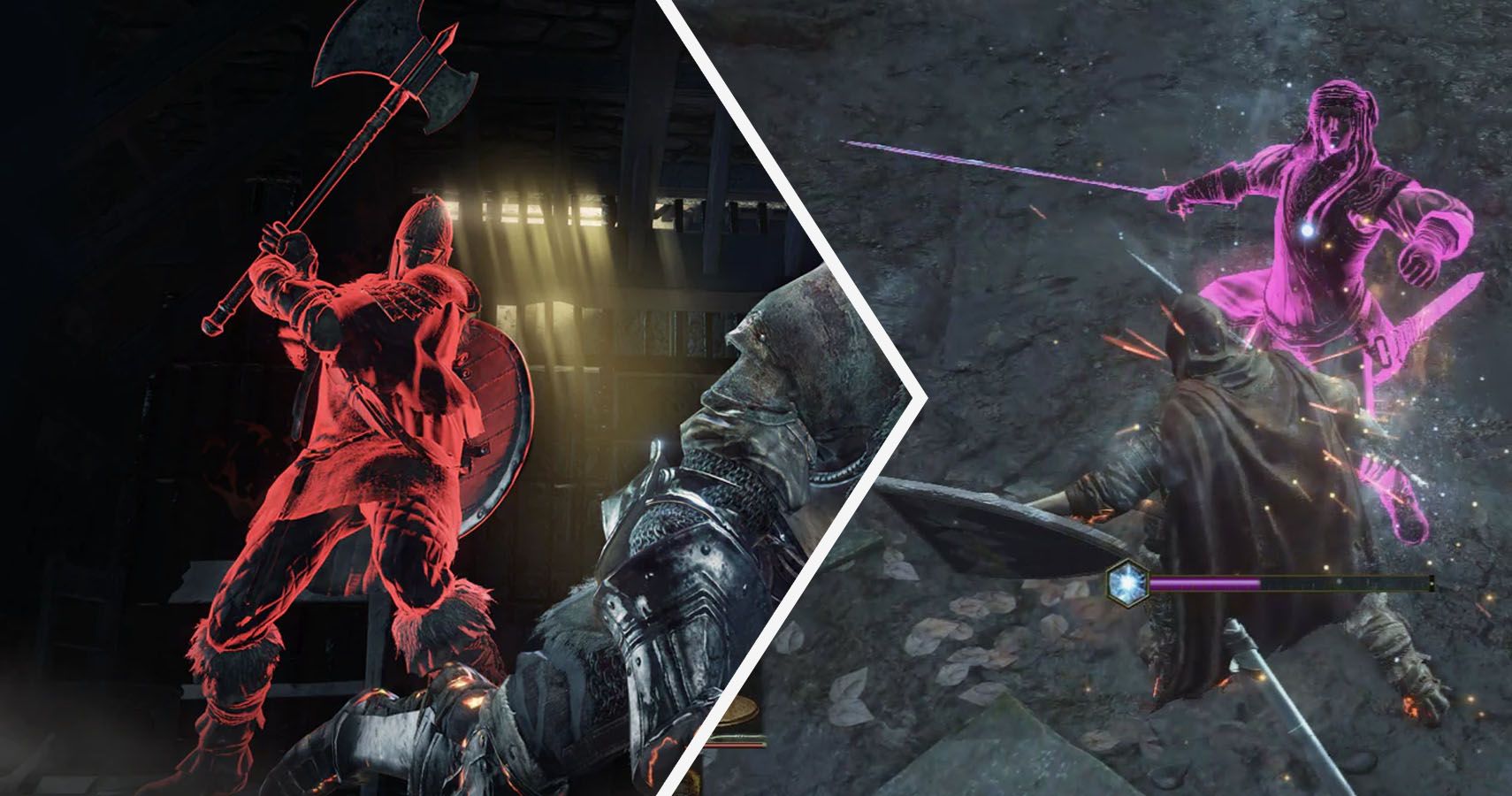