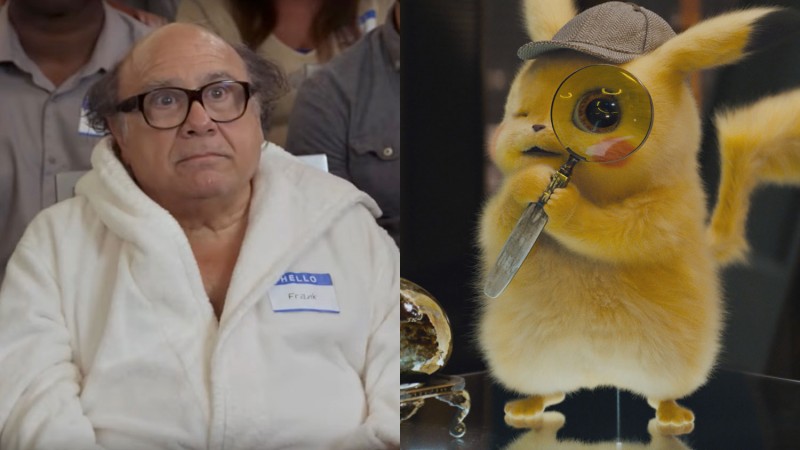 Before Detective Pikachu the video game was even localized for North America, the internet wanted to see Danny DeVito voice Pikachu. When the film was announced the internet’s fervor for DeVito-Pikachu only grew, but the role went to Ryan Reynolds. We visited the set of Pokémon Detective Pikachu in April 2018 and we asked Producer Cale Boyter if they were aware of the demand and whether or not he was considered. “We definitely thought about it and how it might inform the spirit of it. Danny is incredible by the way. I am a huge fan of Danny DeVito,” Boyter says.

When they were thinking about who to cast as Pikachu, VFX producer Greg Baxter says he and his team took lines from assorted actors’ past roles and animated an early version of Pikachu to the audio to see how it looked. Danny DeVito was one of the actors they did a test for. “It was really very funny, so I couldn’t speak to all the reasons why it wasn’t Danny DeVito cast,” Baxter says. “I love Danny and some point maybe after the movie comes about, we can share those early tests. It’s absolutely hilarious.”

Boyter also offered up a strange, cryptic tease saying, “I can’t give away too much, but in terms of where the story goes and how it evolves, we had to sort of look at everything, including what fans weren’t seeing yet to make the decision. But that spirit of Danny DeVito, I promise you, is still inside of Pikachu.” When I said that sounds like a great quote for the movie’s poster, Boyter laughed and said, “By the way, Ryan would probably love that.”

For more from our time on the set of Pokémon Detective Pikachu, you can head here to read the cast and director’s personal histories with Pokémon and here to read about how Pokémon Go wasn’t the reason the movie was greenlit, but it helped. You can also read an extended feature all about the visit in the upcoming May issue of the magazine.

Pokémon Detective Pikachu is coming to theaters on May 10.