People's fascination with dragons has paved the way for an abundance of video games. Because of dragons' mighty power and ability to breathe fire, they will often appear as final bosses in games, adding excitement and terror. We've seen some intriguing dragons with overwhelming designs over the years. Dragons are fictional creatures, but in video games, they display realism.

These are some of the most highly acclaimed video games from which dragons have appeared. The scale of these dragons makes them intimidating. As such fearsome but majestic creatures, the allure is pretty damn understandable.

Updated April 11, 2022, by Hilton Webster: Of the great and plentiful variety of enemies that exist across games, none enthrall the mind as much as dragons too. They're the one creature that seems to exist across all the cultures and mythos of the world. So dragons are always popular, but some recent games have put out some great ones. 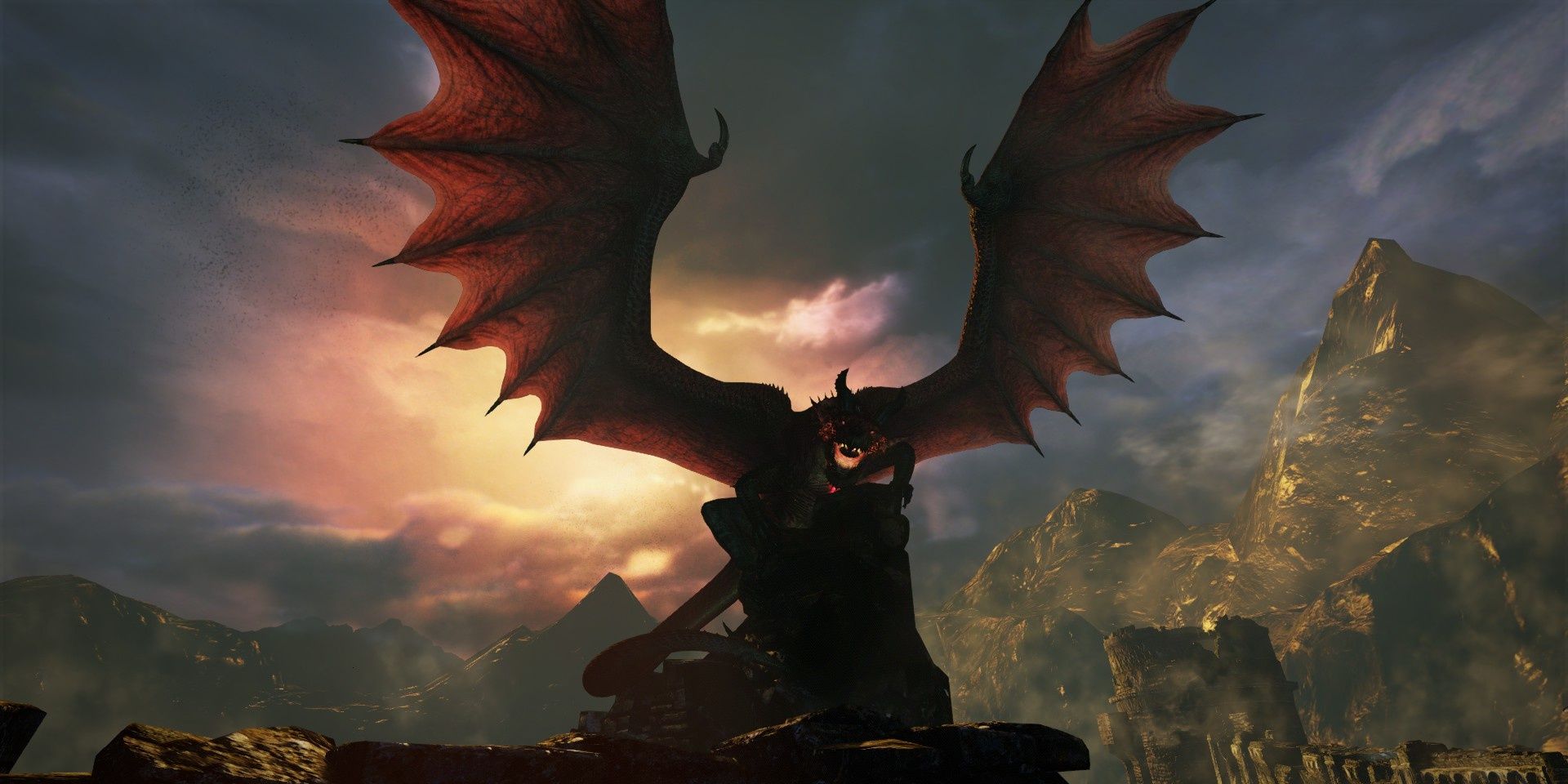 There is truly no other game quite like Dragon's Dogma. It has many aspects you've seen before: open-world, companions, giant monsters and an engaging combat system. But no game has ever weaved them all so well together. Dragon's Dogma is truly the sum of its parts, and what a great thing it is.

But of course, it features many a dragon. They're all a spectacle to fight, grabbing hold as you search for their heart as they drag you through the sky. But in Grigori's first appearance he is a true terror, stealing your heart and setting you on a journey to defeat him. His appearances are brief, but each leaves you in awe. 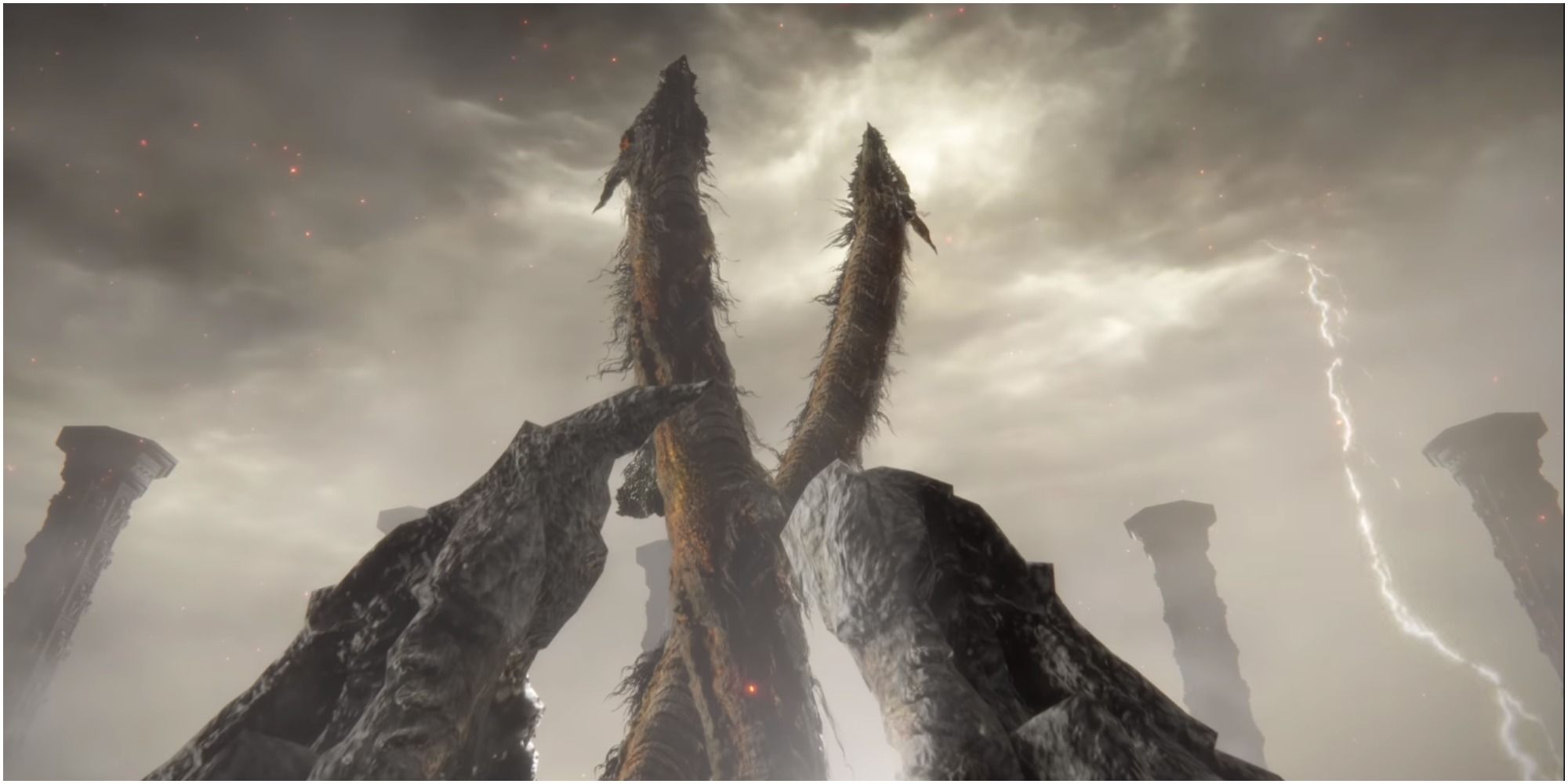 Elden Ring has taken the world by storm, far exceeding sales expectations and creating an open-world so alluring with a great combat system they've spent the last decade refining. It's truly something special. But what FromSoftware can never seem to get away from is their utter love of dragons.

Unlike Dark Souls, plenty of dragons remain, though as weakened descendants of the Ancient Dragons. But in Crumbling Farum Azula, outside the reach of time, lies Dragonlord Placidusax. Unlike many, this two-headed dragon can't move easily, teleporting around you like the embodiment of the storm instead. They're the Dragonlord for a reason. 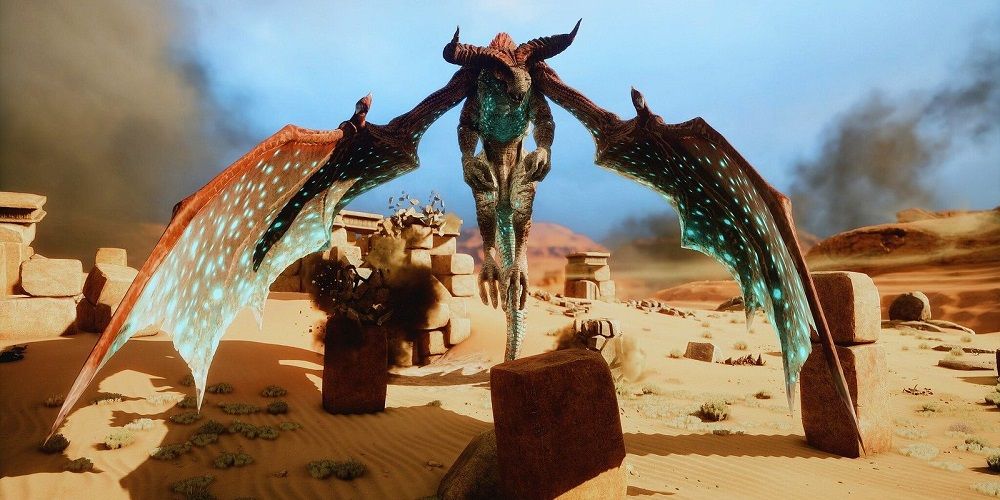 It's worth noting that high dragons appeared in earlier Dragon Age games, but there is a wider variety of them in Dragon Age: Inquisition. A high dragon attacks any opponent who enters its lair. 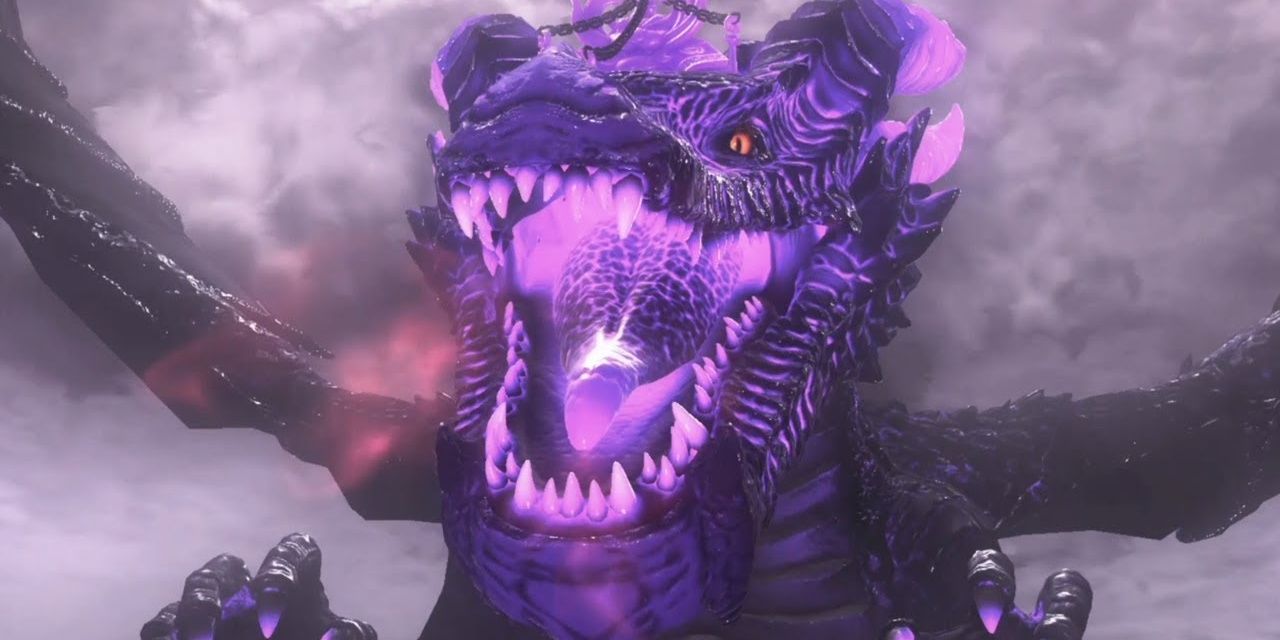 The highly acclaimed Super Mario Odyssey is a wild adventure to the end. To top off its award-winning gameplay, a prodigious dragon makes an appearance in Odyssey's Ruined Kingdom. Showcasing the power of the Nintendo Switch, this dragon looks spectacular.

It was genius for Super Mario Odyssey's developers to add a dragon boss near the end of the game. Making the boss fight longer and more challenging could have improved this part of the game. Contrary to popular belief, Bowser is a Koopa turtle and is not a dragon. 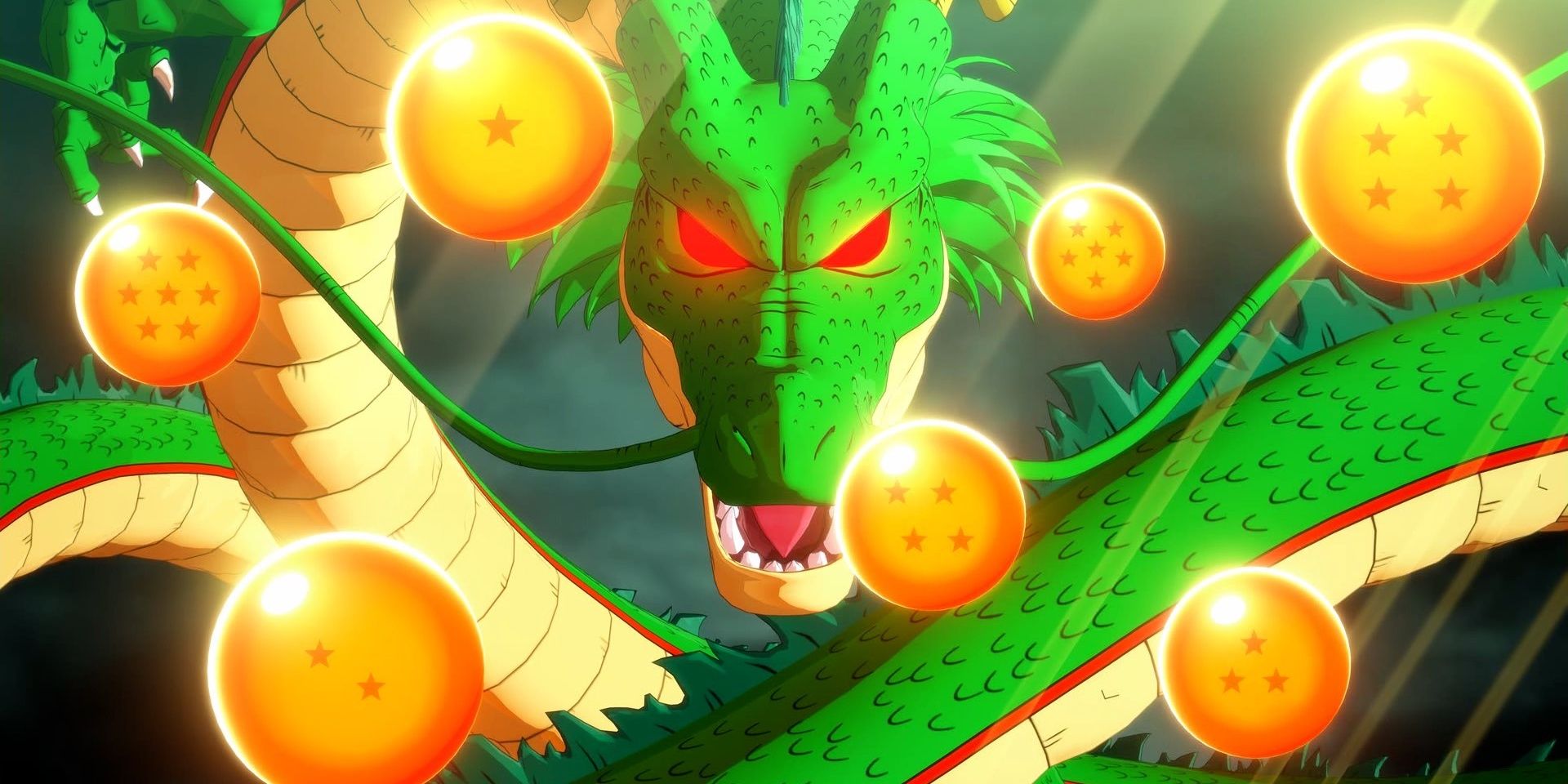 An easily identifiable dragon by many, Shenron is the all-powerful dragon capable of granting wishes to the characters of Dragon Ball. Although there is much drama and action in the show, in one way or another, the show revolves around collecting the Dragon Balls. It is usually the villains who seek to gain its power and the protagonists who try to preserve its sacredness.

Sometimes the heroes of the show collect them to wish their friends back to life. With only a few limitations, including wishing the same wish twice and trying to revive someone who's been deceased for more than a year, Shenron can fulfill almost any wish. 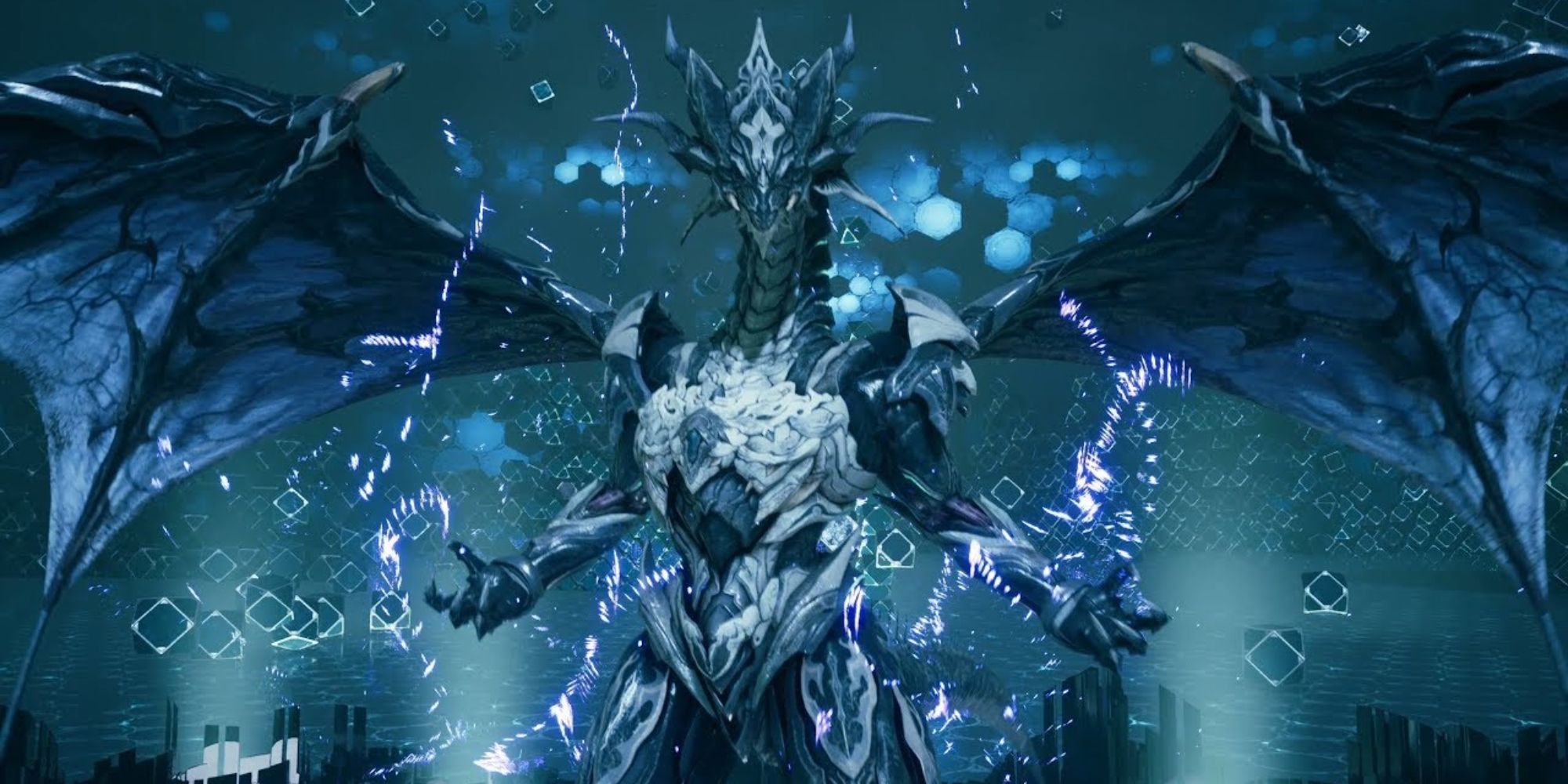 Final Fantasy is one of the oldest games series out there, and it is still in its prime. Final Fantasy 14 is doing great, and Stranger Of Paradise shows a willingness to experiment. But despite every Final Fantasy being so different from what came before, summons are the one thing you can bet on returning.

And who is more famous a summon than Bahamut? They've had many forms, be it a traditional dragon, one that can stand more upright, or even a vengeful god in dragon armor. They're usually the strongest summon too, and Bahamut knows it. They gloat like they're above everyone, and are a fell omen to any enemy. 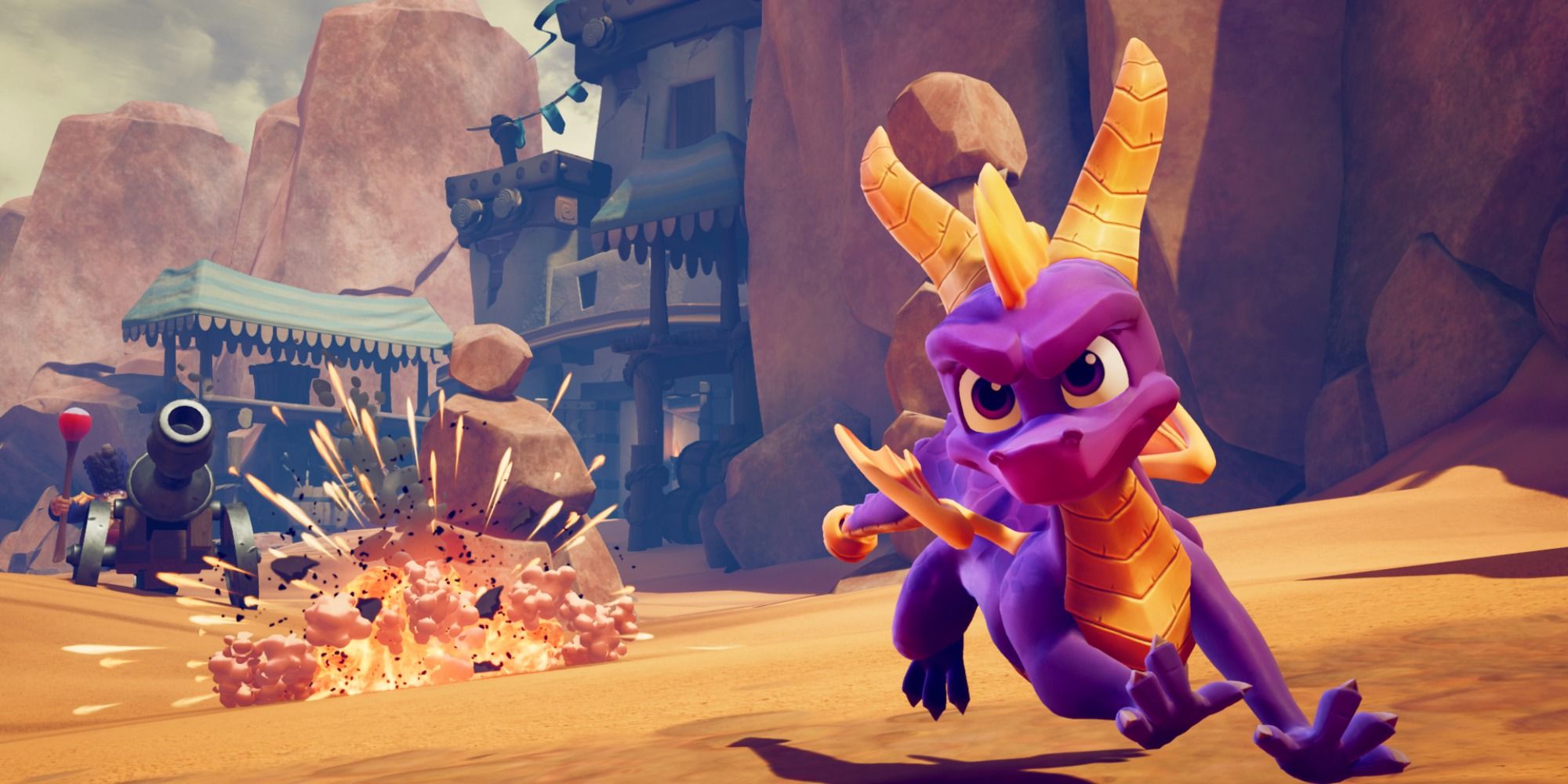 The best way to enjoy the Spyro trilogy is to play the Spyro Reignited Trilogy. The game has been re-worked from the ground up, offering unprecedented levels of detail, which makes the gameplay more enjoyable.

Classic 3D platform video games of the 1990s and early 2000s are incomparable to today's games. Along with games like Super Mario 64, Donkey Kong 64, Tomb Raider, and Ratchet and Clank, Spyro the Dragon stood as one of the greatest 3D platform games. Spyro may be the most recognizable dragon in video games. And yet as beloved as the little purple dragon is, he is marred by his association with Activision's abuse of their employees. 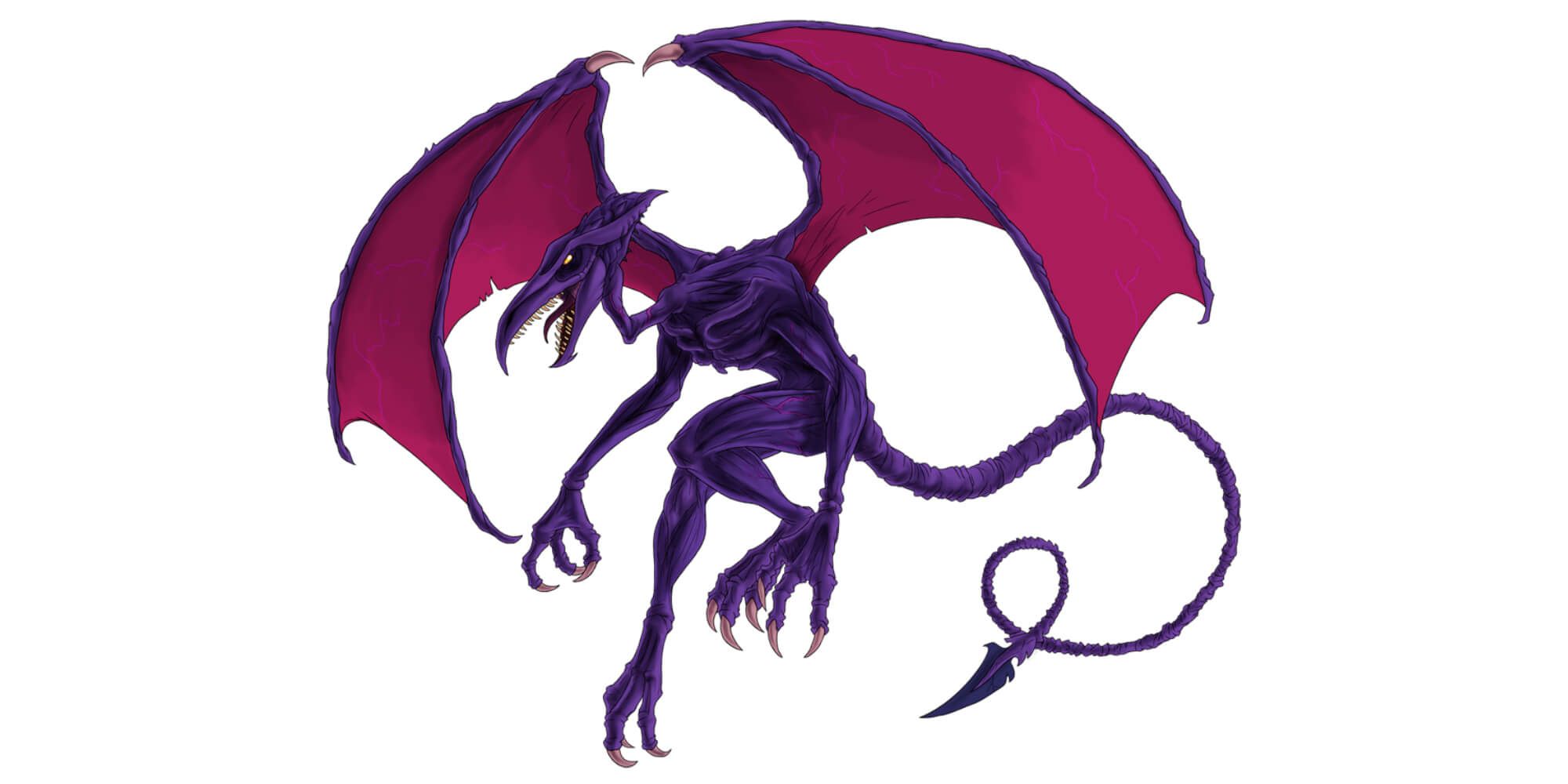 Many of us remember what it felt like to encounter Ridley in the original Metroid for NES. It was smaller than its later versions, but the game was a joy anyway. Later Metroid titles, such as the one in Super Metroid for SNES, included a much more detailed rendering of Ridley. 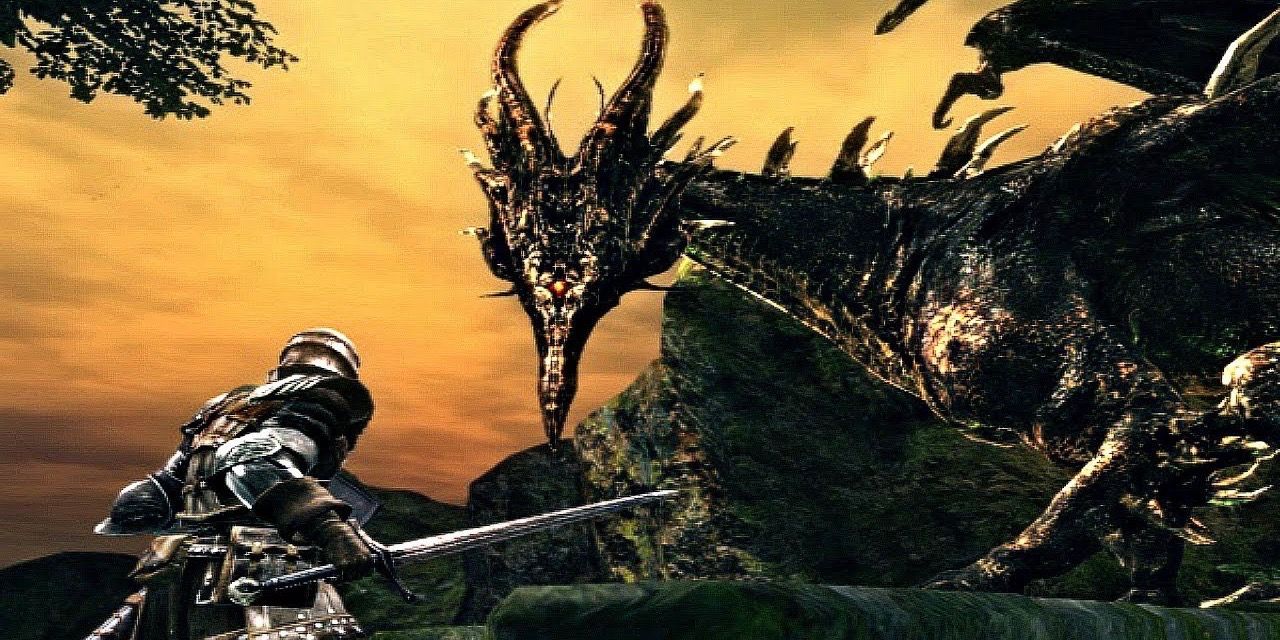 It can be somewhat hard to envision a world without Dark Souls as it stands now. The way the world expanded, how it told its story, and of course, its wonderful combat is inseparable from modern gaming. But something that never fails to inspire terror is the sight of its few, but menacing, dragons.

Sure, some of the most iconic, like the Hellkite Wyvern that blocks the bridge of the Undead Burg, are typically classed as dragons. But they are wyverns. But Kalameet from Artorias of the Abyss is special, a true dragon corrupted by the abyss. They are a horror to face, and wield shrieking telekinesis with ease, making them truly unpredictable. 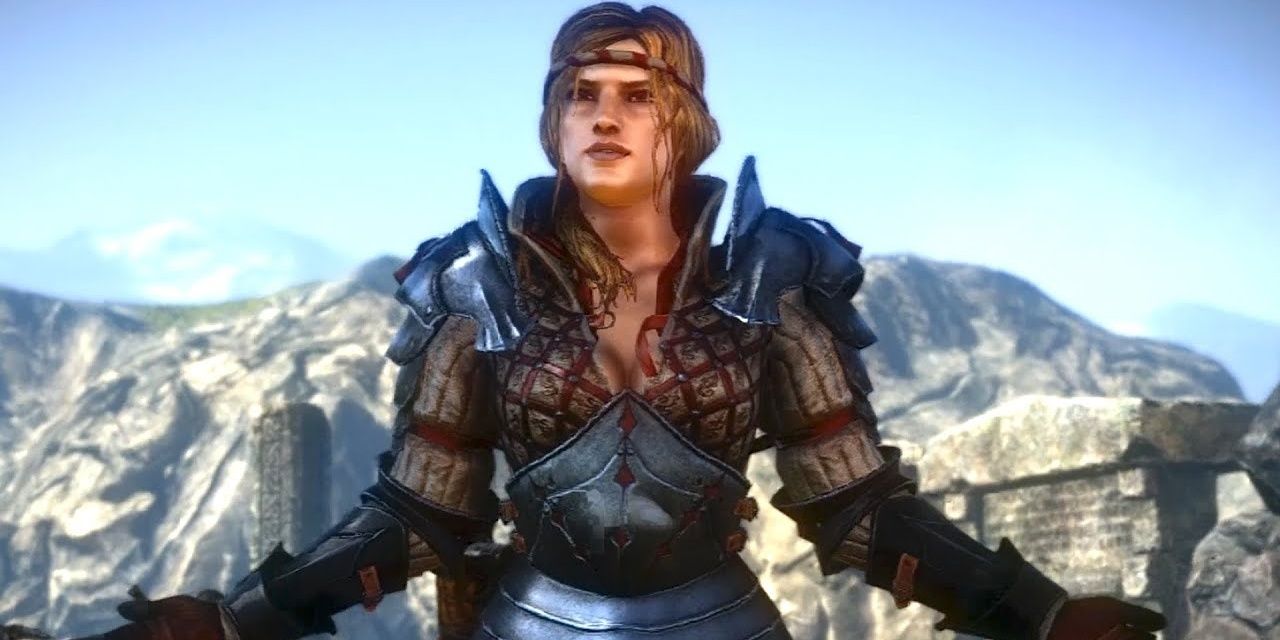 The Witcher is a series that needs no introduction. From the beloved original books to the famed Netflix series, none are quite so beloved as CD Projekt Red's own games. They were a breath of fresh air, taking the pure essence of the books into gameplay with ease, even if the first game had some issues.

But The Witcher 2 was a resounding success. And depending on your choices, you may not have even met Saskia properly. And maybe this is given away by the image, but dragons in The Witcher are shapeshifters, but also a dying breed. Saskia is one of the few remaining, taking the form of a dragon to defend her people. It's noble in intent, rather than some vicious beast by nature. 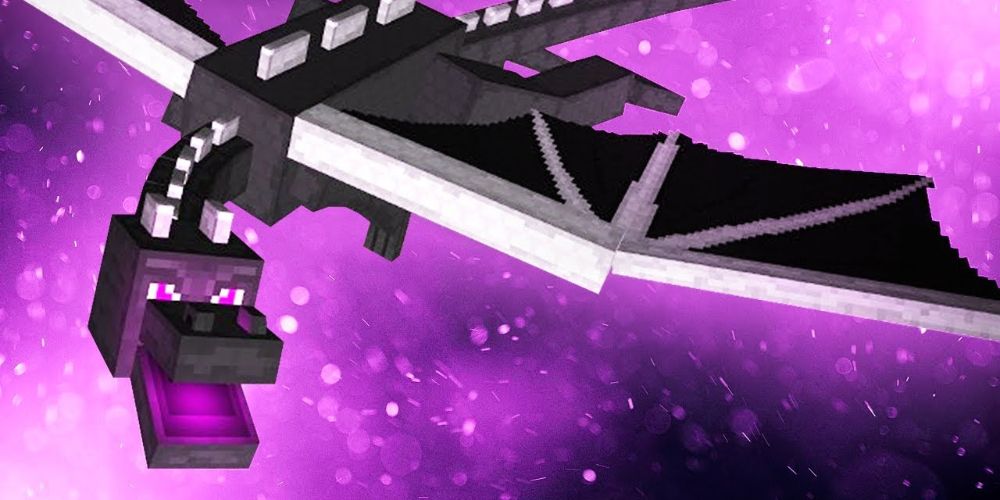 This dragon can be seen in all difficulty modes, but in Peaceful Mode, it cannot harm players. The Ender Dragon's impact and detrimental power in Minecraft, the highest-selling game of all time, make it an influential dragon in video games. 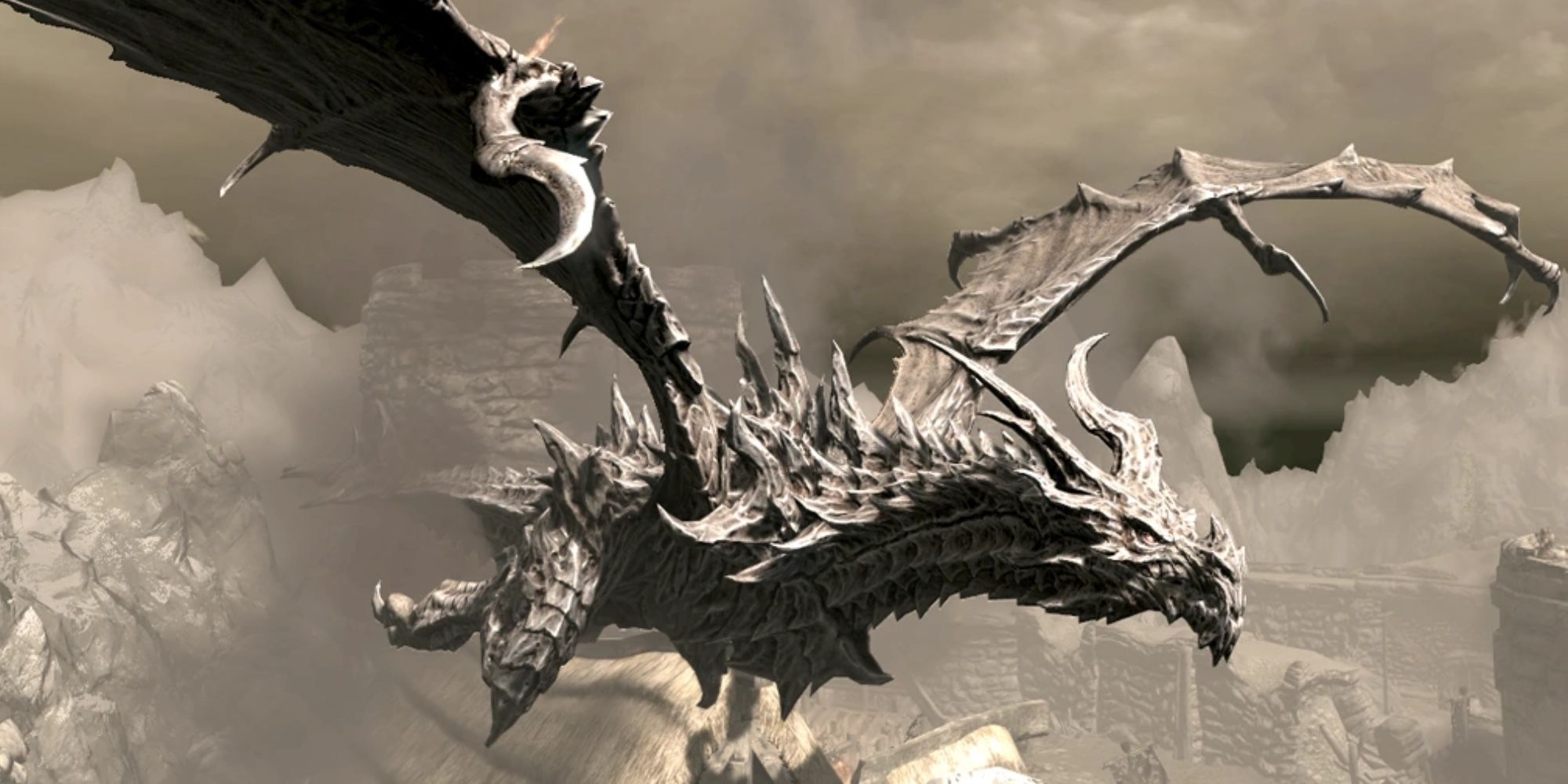 A recurring dragon has a drastic influence in the events of The Elder Scrolls 5: Skyrim. Although the endgame in Skyrim lasts forever since quests regenerate and players can level up infinitely, there is the main story with an ending involving a fierce dragon.

Alduin is an ancient dragon with red eyes. Many people from Skyrim thought of Alduin as being foolish for wanting to be worshipped. If he had remained the World Eater and not been power-hungry, he would have likely lived. For being a dragon in Skyrim, an impactful role-playing game, Alduin deserves this top spot.